Goooood morning! Oh, I’m so so excited for Friday (and I know I’m beginning to sound like a broken record, but I can’t help it). This morning I allowed myself to sleep in a little extra longer in place of a workout, thanks to somewhat of a later night than usual. But it was totally cool, since last night was loads of fun with lots of great food. 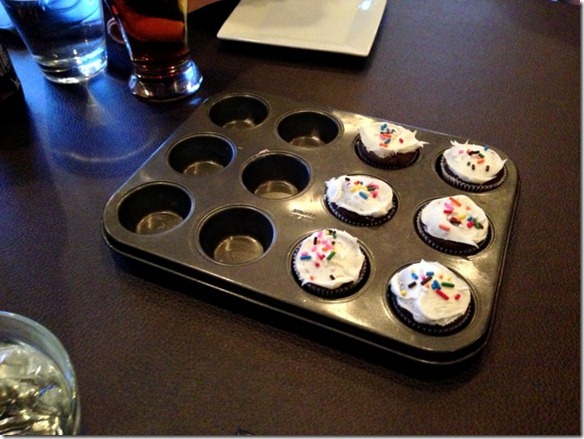 Okay, so I’ll explain the random mini cupcakes at our table at the restaurant. Jay and I met up last night with Sarah and Jeff and our other friends, Kanika and Shaheen (who you’ve certainly seen around here before). 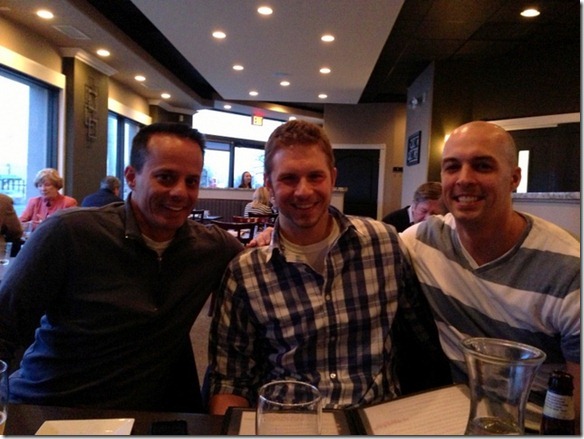 So back actually at Brian and Mal’s wedding, we found out that Kanika was expecting! She’s due about 5 weeks after I am, and yesterday they found out the gender of their little one…hence the cupcakes. ;) 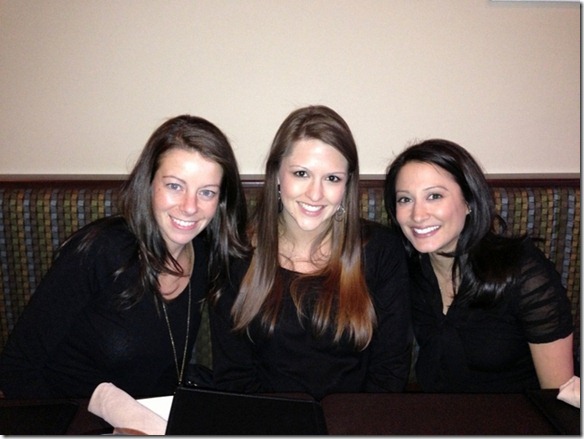 Gosh, I need a haircut. BAD. And I also swear we were not in mourning based on our clothing preferences for the evening.

So before anything else, we HAD to dig into the cupcakes… 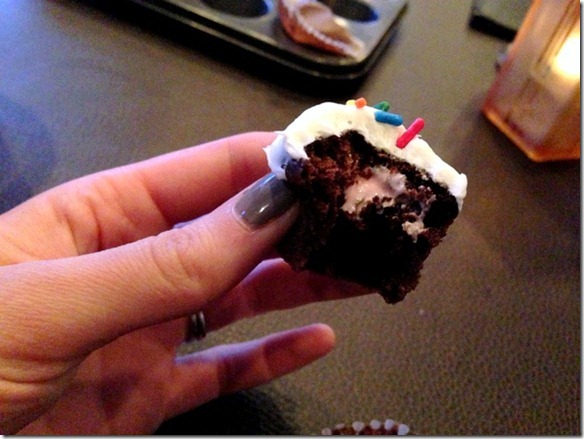 It’s a GIRL! It’s so funny, because out of our circle of friends, they babies are basically 98% boys. I feel like everyone I know lately is having a boy, so we all felt like Kanika just had to have a girl. Turns out, we were right!

As a little gift, Sarah and I decided to buy two different newborn outfits – one for a boy, one for a girl – and whichever she was having she’d get to keep and we’d return the other one. Welllll….I decided to just hold on to the little boy outfit for my little guy because it was just too cute to pass up. 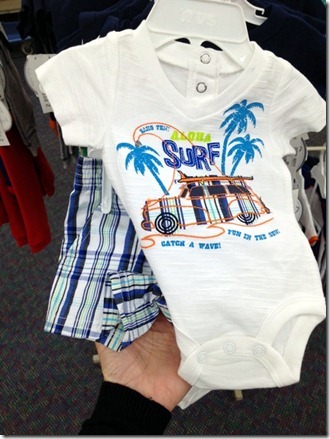 So we all met for dinner last night at Risotto, a fairly new restaurant in the Albany area. Sarah had already been before and raved about it, so I was excited to give it a try. In addition to a bunch of different risotto dishes and entrees, Risotto also has a pretty extensive tapas menu so we decided to try out a bunch to share with the table.

Now I’ve had tapas before…sometimes I find you get fairly small portions, but other times it seems like they’re pretty generous. At Risotto, they were VERY generous. Here’s a look at what we got…

Calamari, which came with parmesan cheese, scallions and peppadews accompanied by a lemon dill béchamel and spicy tomato sauce. The calamari was great, but I took the tomato sauce without knowing it was spicy which I didn’t love…I heard the lemon dill sauce was incredible though. 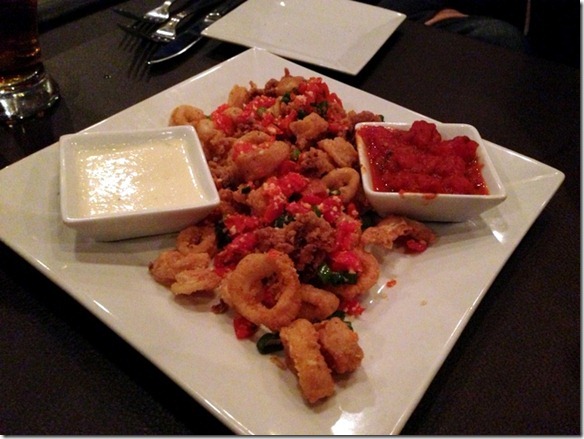 Primo Risotto- chicken, cappicola ham and swiss cheese stuffed in a fried risotto shell, served with hollandaise sauce…and a side of Sarah being a goofball (haha, sorry Sarah, it was the only photo of them I got!). These were one of my favorites. 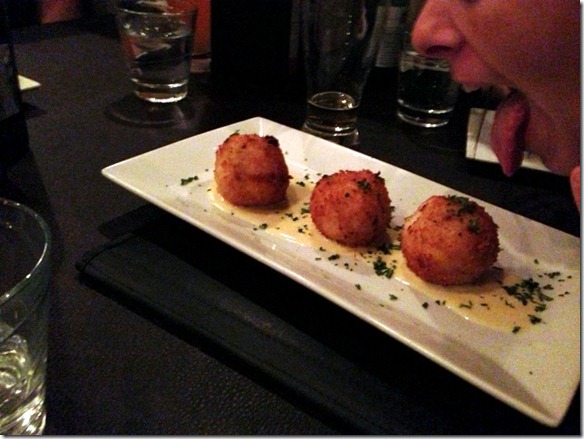 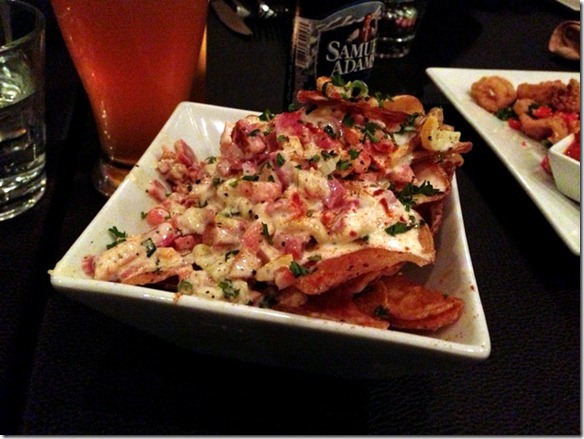 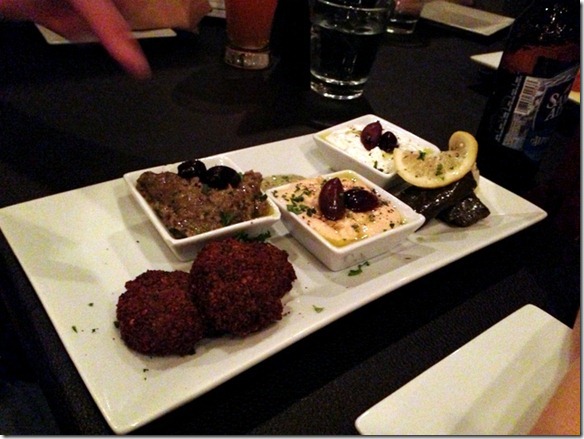 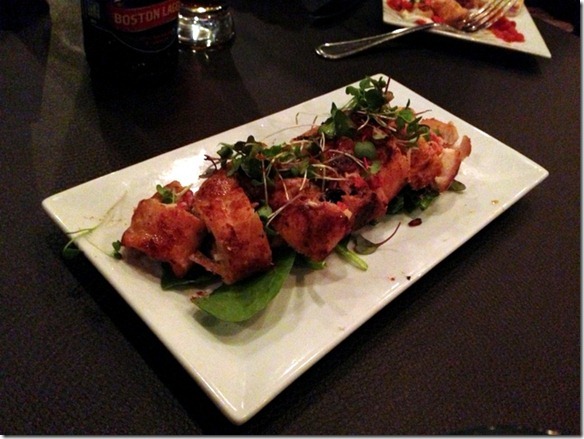 We also got a bruschetta dish as well, but I apparently forgot to snap a photo of that one.

And since I couldn’t go to a restaurant called Risotto without actually trying the risotto, Jay and I opted to share one. 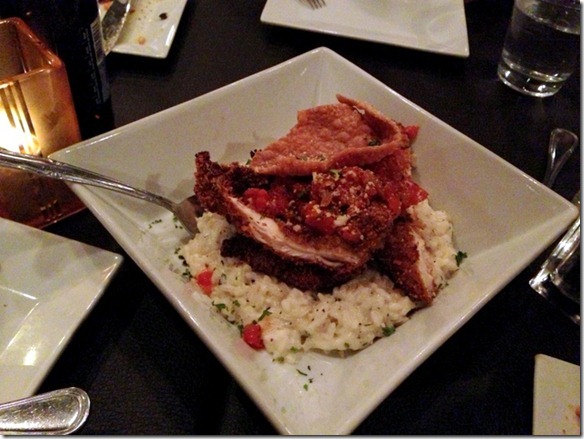 We went with the Chicken Hendizarro, which was made with loads of provolone and fresh mozzarella, topped with a crispy chicken breast and finished with a fire roasted tomato chutney. 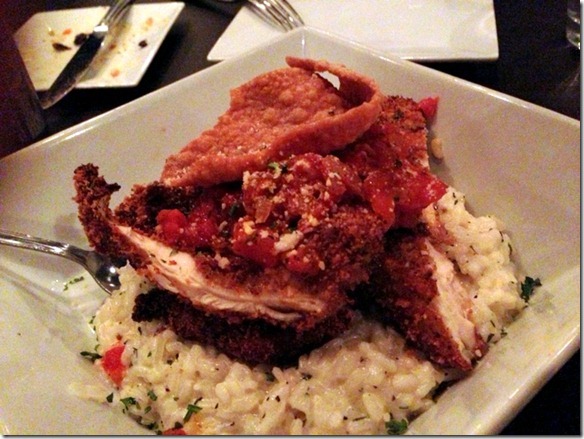 This dish tasted absolutely amazing, but I’m so glad we decided to split it because I think we still went home with at least a third of it. Soooo good, but sooo filling!

So what’s good for the weekend guys and gals? Jay and I don’t have any major plans at the moment, although we are hoping that the rest of our nursery furniture came in so we can work on that! I also went ahead and booked myself a pregnancy massage for Saturday morning, thanks to a gift card that I received from Christmas. I’ve been waiting and waiting, but I think it’s finally time. I am stoked!