This morning I had my first attempt at Hot Yoga, after being invited by Katie to join her for a class. I’m willing to try just about anything at least once, so myself, Jen, & Rebecca made the trip up together to meet Katie at Hot Yoga Saratoga. 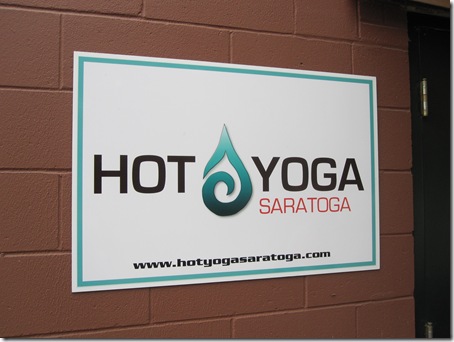 Before leaving the house, I snacked on a small banana with almond butter. 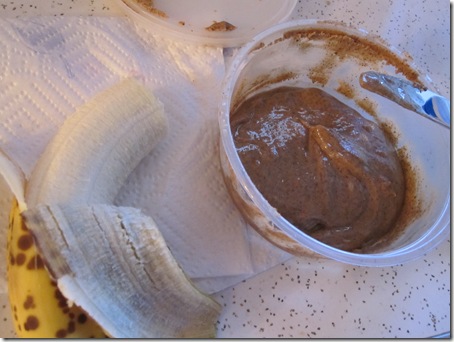 Katie advised us that we shouldn’t eat anything too heavy, since it’d be challenging for the body to digest it during the class. It made sense, so I stuck with something small, but my tummy was definitely making some noises at the beginning of class. Jen, you heard ‘em! ;) Luckily once class started, the rumbles subsided. I think my body was in too much shock by the heat! 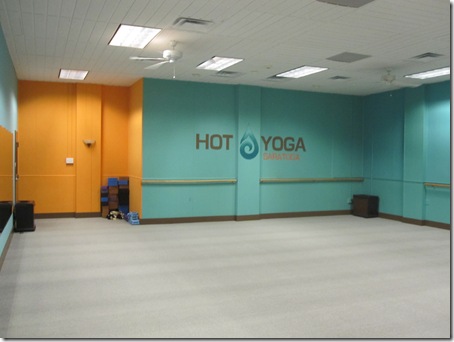 Hot Yoga is really no joke. Our instructor told us afterwards that the room today was set at 103 degrees. 103 DEGREES! I literally felt like I was melting immediately upon entering. Since it was so different from anything I’d ever done, it took a few minutes to try to get my mind to focus less on the heat and more on the poses and how my body was feeling. Eventually I got myself there, and the class became that much easier more tolerable. I definitely can’t say that it was easy because everything about it was a challenge by far.

The class lasted for 90 minutes, and was comprised of a number of poses, done in sets of two, that I had never even heard of before. I experienced a little bit of light-headedness a couple times, which apparently is normal for beginners, but just tried to take it easy and keep myself hydrated. I honestly don’t think I have ever sweat so much in my life. I mean I was soaked and dripping, head to toe. I know that’s entirely gross, maybe a little TMI, but hey that’s how I roll.

Only a few times did I experience some slight discomfort in my lower back while laying down, but overall I found the class to be very invigorating, and left the studio feeling totally refreshed. I’m not sure if it’s something I would incorporate into my workout routine on a regular basis, however. For one, the price is a little steep ($15/class for a drop-ins) and it’s also a little far of a drive for me. I wouldn’t be opposed to doing it again at some point, but just probably won’t end up doing it again soon. Either way, it was still a great experience! 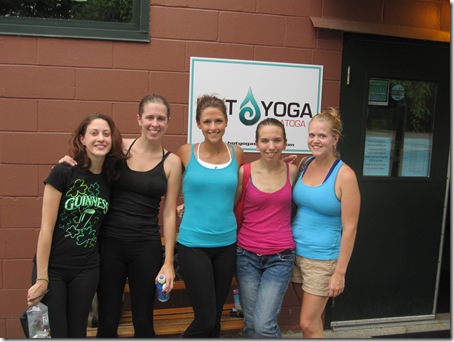 After relaxing and “cooling ourselves off” in the 80 degree weather outside, we all walked down for some brunch at Saratoga Coffee Traders. 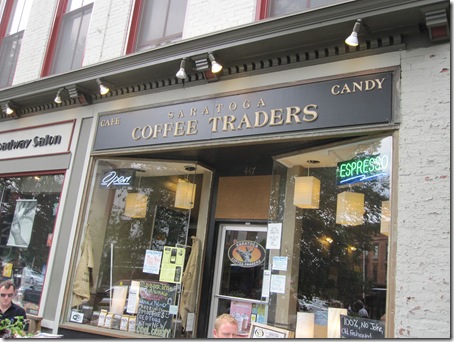 This was my first time visiting here, but I was definitely impressed! The inside decor was totally cozy and cute, with the front of the cafe being mostly a seating area with different tables and chairs. I absolutely loved this picture that was on the wall. So pretty! 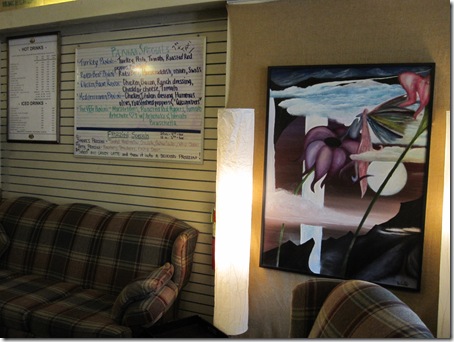 But the back of the room was an entire CANDY store! They had so many different varieties, I literally was like “a kid in a candy store.” ;) 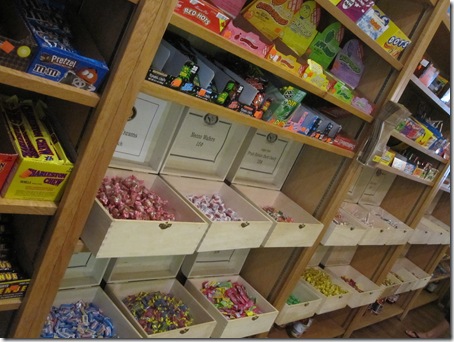 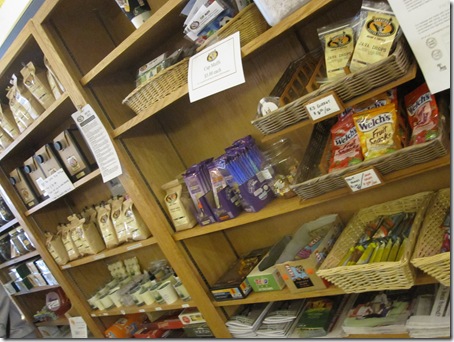 After scoping out the scenery, it was time to scope out the MENU: 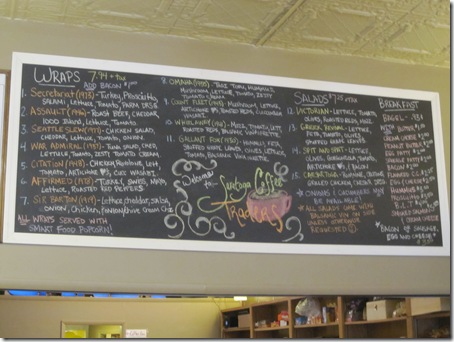 I decided I was more in the mood for breakfast than lunch food, so I ordered an egg & cheese (provolone) with tomatoes on a whole wheat bagel. It was super delicious, and not loaded with any extra butter or grease which was fab. ;) 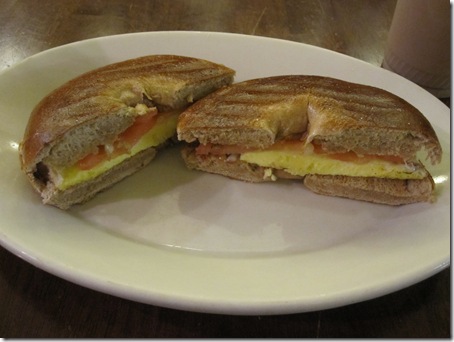 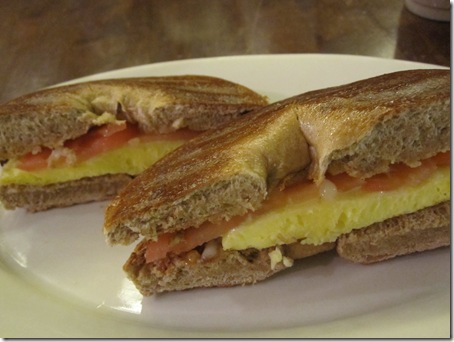 When we were all previously arranging our get-together, Katie had mentioned that this cafe had something called “Candy Lattes.” With names such as Sky Bar, Almond Joy, Junior Mint, & Milky Way on the menu, I immediately decided that I needed one in my life. However, in true “Courtney fashion,” I ended up creating my own combo: A mix of their Big Hunk (vanilla + caramel) and their Roche (hazelnut + caramel). 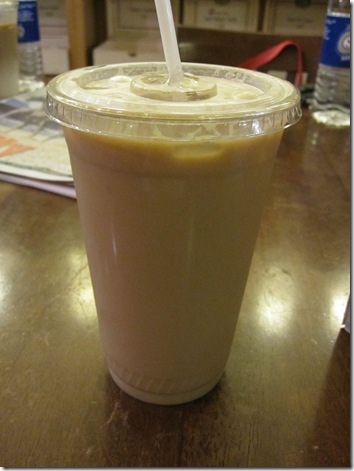 I’ll call it a Hunky Roche, which was vanilla + caramel + hazelnut. It was phenomenal. I pretty much had to stop and remind myself to breathe in between sips. It was too good to put down!! :-D

We all definitely had a great time chatting, eating, and just enjoying each others’ company. 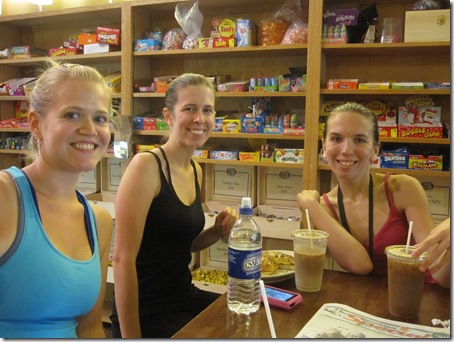 I just love blogger meet-ups. They’re so much fun! :) 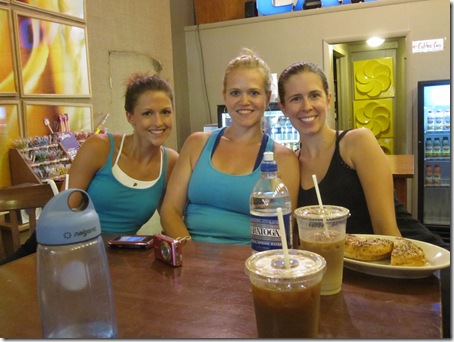 After brunch, there was mention of making a pit-stop at Plum Dandy. After my first experience there, I really saw no way that it could be passed up. ;) 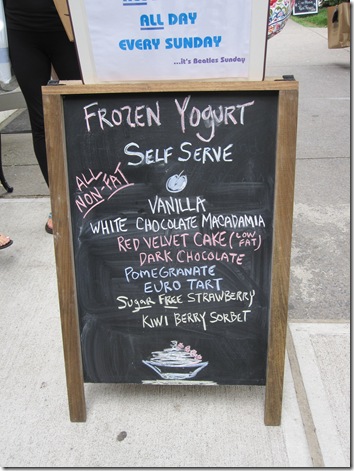 I was wicked excited to be back for some fro yo at this place. If you want to see just how excited I was, you can check out Jen’s post. I can be such a nerd sometimes! :)

Luckily, I managed to keep portions in control today and probably had about 1/3 of what I had my first time going. Plum Dandy, you can fool me once, but I’ve got your number now! ;) 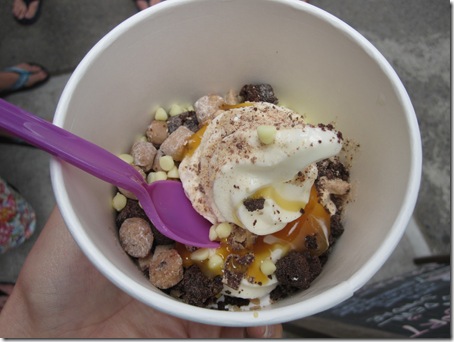 I got the non-fat, white chocolate macadamia flavor, and topped it off with a teeny drizzle of caramel, some brownie chunks, cookie dough chunks, Heath bars, and mini white chocolate chips. Oh good gosh was it amazing. I finished every last bite, and was definitely STUFFED by the end.

Ever since I got home, I’ve been feeling so incredibly tired. I read on the Hot Yoga website that for beginners “this is normal, natural and a good sign that your body is responding to the yoga, by cleansing and detoxifying.” I just ended up taking about a 30 minute nap and feel a little better, but I’ll probably be taking it easy for the rest of the day.

Have you ever tried hot yoga or any other types of yoga? What do you think of it?