You know, despite it being such a gloomy day, I have been in one of the best moods today!

Mid-afternoon, I started getting a bit hungry, so I made myself a small lunch. I kept it small because breakfast was consumed later than normal, and dinner was only a few hours away. And I really wasn’t in the mood to wash any dishes, so I really utilized my almost-empty cottage cheese container. I can be savvy when I want to be. 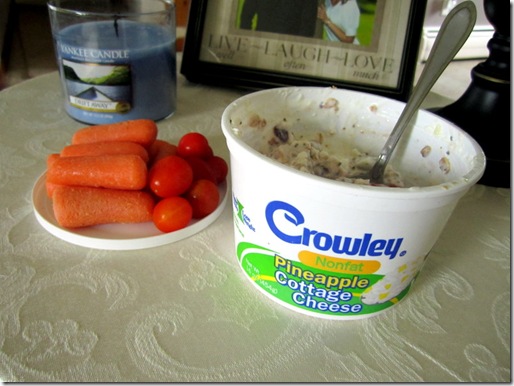 I combined the last of the cottage cheese with some plain Chobani, strawberries, and granola. Now before you start judging my ugly, horrendous-looking lunch, let me just tell you…it was delicious. You might not realize it from looking at it here, but I promise you. It was. 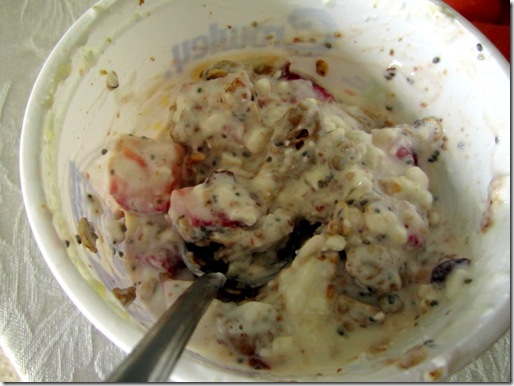 I’ve got a bit of a secret to let you guys in on. For those of you who know me well enough, this is not exactly a secret…but let’s just pretend it is. 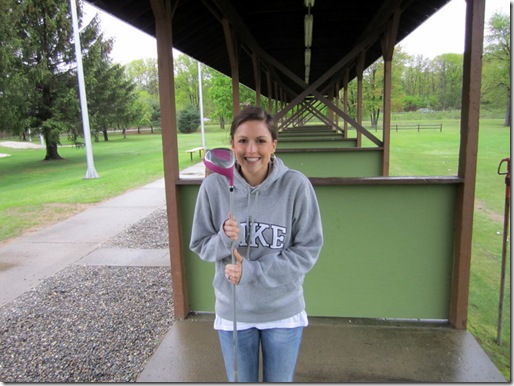 AND I have my own set of clubs… 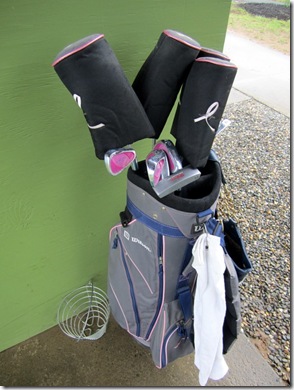 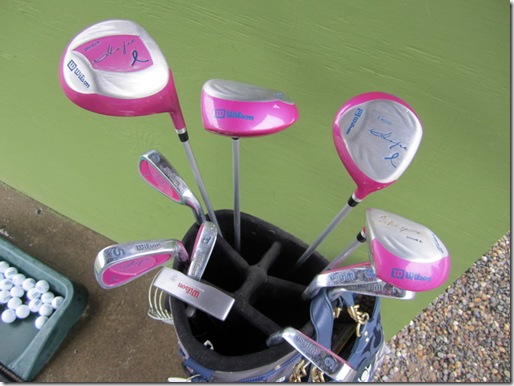 A trip to the driving range was actually what Jay and I had planned earlier in the week, and since we both really had the itch to go, we decided to brave the rain and head out anyways. 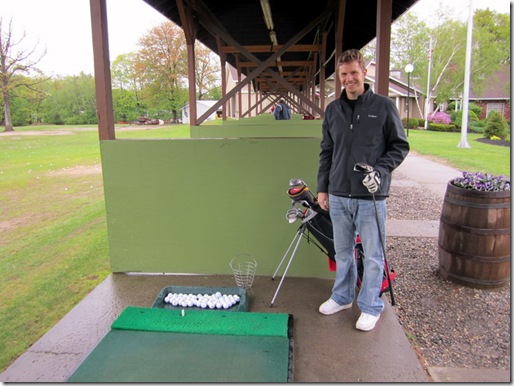 Normally, when we’ve gone in the past, we each get a bucket of balls, and I end up giving half of my bucket to Jay because I’m either bored, tired, sore, cranky, or frustrated. But today was a totally different story.

Maybe it was because I wasn’t able to get out once last year with my clubs, but today I was rarin’ and ready to go! 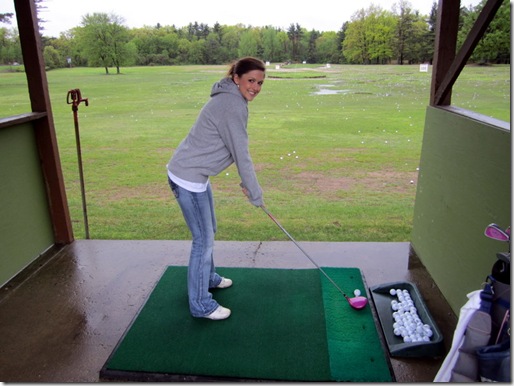 Seeing as though it had been almost 2 years, I prepped myself ahead of time to not get frustrated with the fact that I would probably stink up the place. I mean, I’m certainly no pro, and once I start to go downhill, it’s a pretty steep slope my friends. 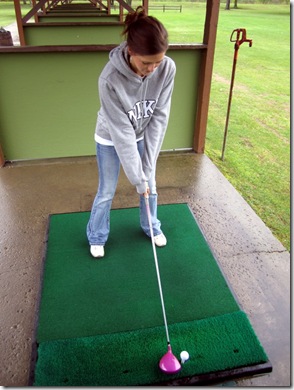 But believe it or not, I rocked the driving range today! I was kickin’ butt and takin’ names. You can even see for yourself… 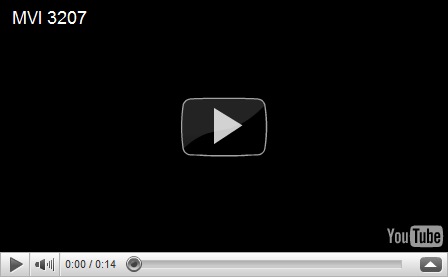 Courtney at the Driving Range!

Too bad that shot was more like a line drive than one of those fun ones way up in the air. I promise, I had a few of those, too.

Jay was actually quite impressed, so he says. So much so, that he said he needed to test out my driver for himself… 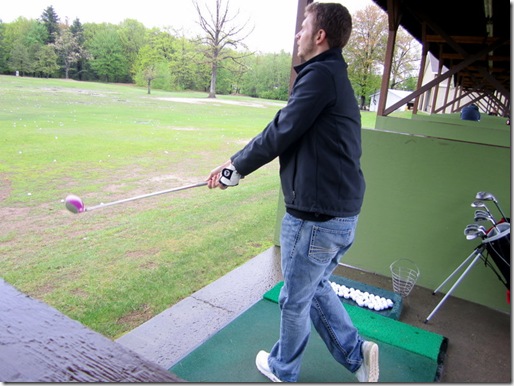 I don’t know about you, but I think he looks good in pink?

About a quarter of the way through my bucket, I suddenly realized… 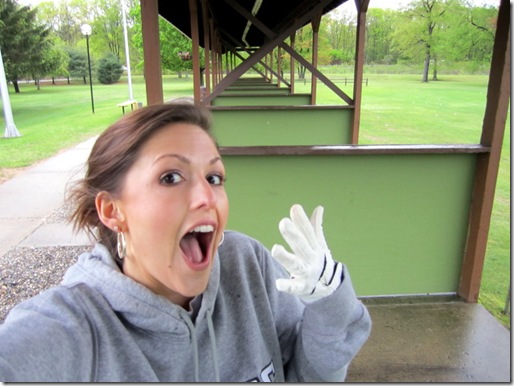 I had a golf glove I could use! How could I forget?? If only it had been insulated… 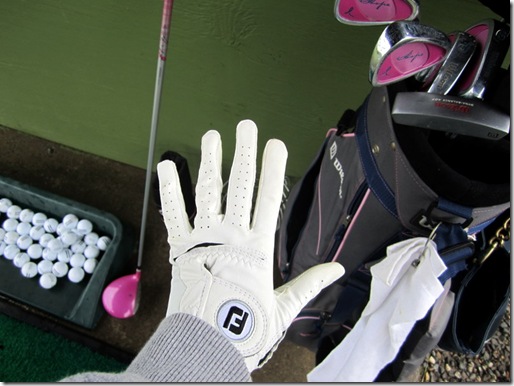 …because by the time I was finished with my bucket, I was absolutely chilled to the bone. 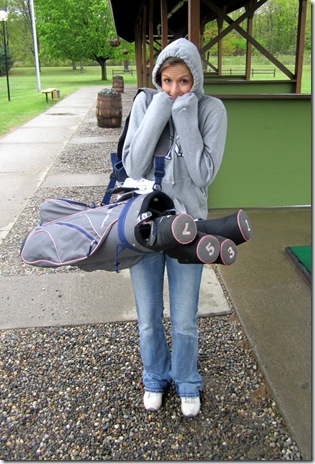 BRRRR!!! Even though it was fun, I don’t think I’ll be heading back out until the weather warms up again. It’s kind of hard to swing the club when I can’t feel my fingertips…

On our way home from the driving range, Jay and I stopped to pick up some dinner. We’ve both been craving pizza since Friday, and had planned on saving some for tonight. 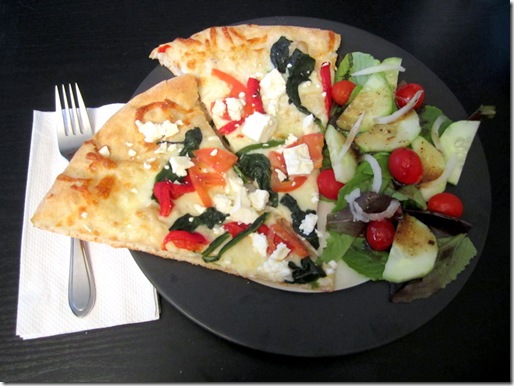 Along with a dinky little side salad I made for myself, I had two slices of what could now possibly be one of my favorite pizzas, ever.

For the locals, we got the Mediterranean pizza from DaVinci’s, which was garlic & olive oil, roasted red peppers, tomatoes, spinach, feta, and mozzarella cheese. 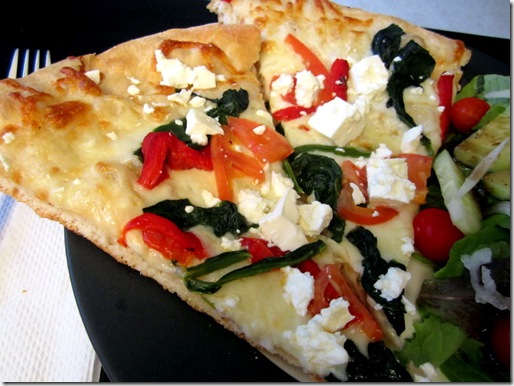 It was ahhhhh-mazing. I really had to stop myself at two; however, the night is still young, and Jay and I have “Love and Other Drugs” to watch from Redbox. So we’ll see what happens…no promises.

Have you ever tried golfing? (Yes, mini-golf counts!) Do you like it?