Before anything else, I have a couple of things I want to point out. First, I want to say thanks to everyone who pointed out my “oops” in the question section of this afternoon’s post. I totally missed one of the questions, which ended up getting tangled up in another one. Woops!

I’ve gone back, edited the questions and also added a new one that came through, so feel free to check it out…I think we should be all set for now!

Second, since announcing the new plan, I’ve been asked by a few people why I want to lose weight, which I expected. This is certainly a valid question, but I think I could have been clearer in my reasoning from when I first addressed it in my goals for the plan, so I’m going to try to do that now.

First, let me say that I am not, nor have I ever been, huge on numbers when it comes to my weight. I very rarely use a scale, as I know that numbers can fluctuate for a number of reasons and represent many different things. The majority of time when I’m monitoring my body, I prefer to go by:

With the new plan, a goal was set to try to lose 5-6 pounds, yes. But most importantly, I’m looking for results that I can actually see and feel. I want to stop feeling like I have to keep reaching for the “flowy” tops because I’m uncomfortable with the weight I’ve gained in my mid-section. I want to be able to fit comfortably into my favorite jeans again, without feeling like an overstuffed sausage…and I don’t think there’s anything wrong with that.

That being said, maybe my true goals were initially unclear, because if all of that could happen and for some reason the scale didn’t budge, I would be 100% okay with that. I know that weight loss is a subject that seems to be somewhat taboo in the healthy living blog realm, but it really doesn’t have to be. Weight is just a number. It doesn’t (nor should it) define a person. I know that some of the weight I’ve gained this past year is muscle, and that’s great. No, that’s freakin’ awesome. I love my muscles! Now with this new plan, hopefully I’ll be able to show ‘em off a little bit better.

Alright, now that we’ve got that cleared up, let’s move on! After work, I had a couple things to take care of…some of which could potentially be very exciting(!)…then came home, and was ready to make dinner.

Let’s call this…awesomeness in a bowl. 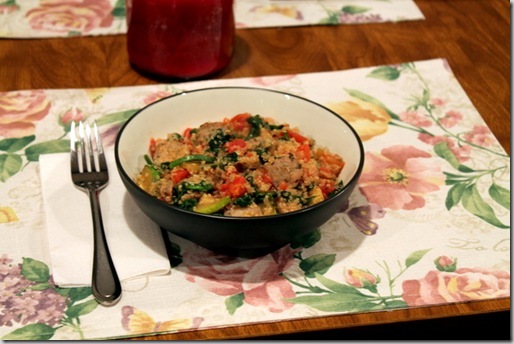 Over the summer, Jay and I ended up making a last-minute dish very similar to this and we both totally loved it. As for why we’ve waited five months to make it again, well, who knows. 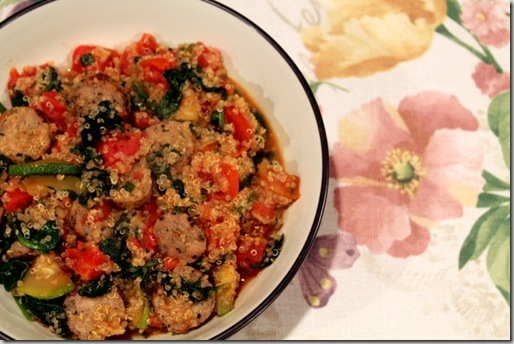 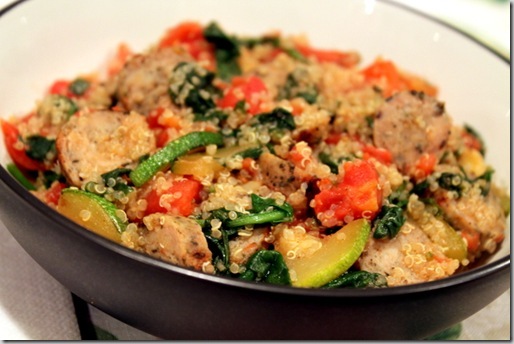 I think the only thing that could have made this any better would have been to add some goat cheese to it. That’s one of my favorite additions to a quinoa dish. So, so tasty!

Tonight, I’m planning on enjoying my after dinner treat while watching a little trash TV…and by trash TV, I mean…

Lezbi honest (season 4 anyone?)…I actually got a little bored and annoyed by the end of last season, but this show is such a train wreck that I am ready to watch again. I’ll give it a chance and we’ll see how it goes, but I definitely have to get my Vinny & Pauly D. fix.

How do you feel about the discussion of weight loss on healthy living blogs?

Are there any shows you tune into that you know are terrible, but you can’t help stop watching?