Shortly after Jay and I arrived over at Joe & Kate’s house yesterday evening, we got the chance to pop a little bubbly after finding out that Joey got a new job! 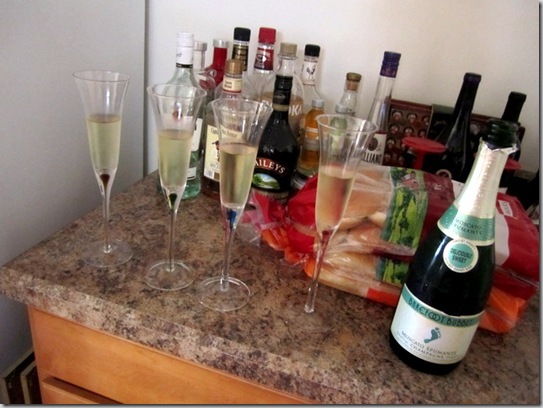 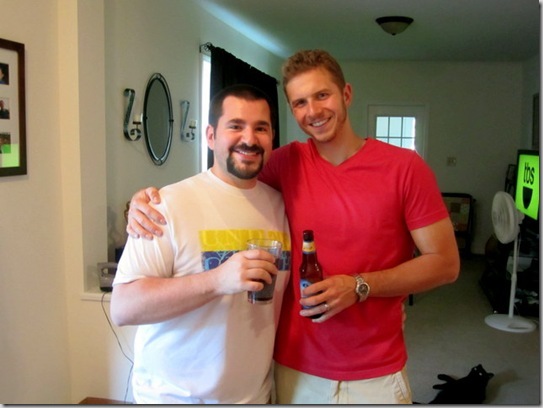 Hey, you know I’m always up for an excuse to celebrate with a little champagne. 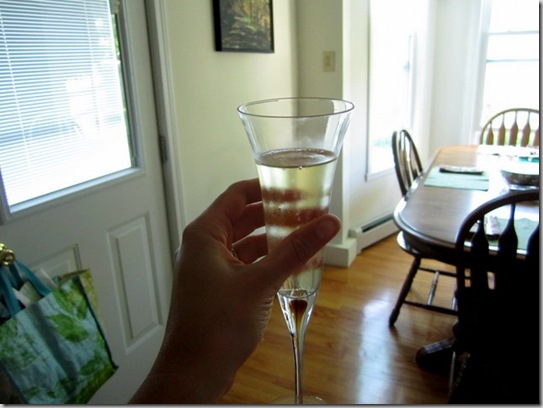 It was tastin’ pretty good last night too, so don’t let that one glass fool you. Kate and I enjoyed it quite a bit.

We also didn’t have to wait too long for dinner to be ready, which was awesome because I was starrrrrving. 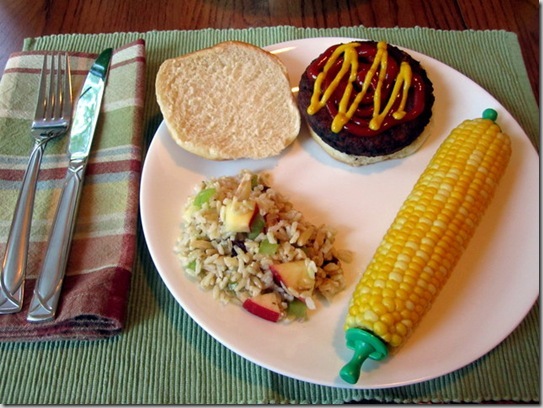 I had a black bean veggie burger from the grill, corn on the cob, and a serving of this delicious brown rice salad that Kate put together. 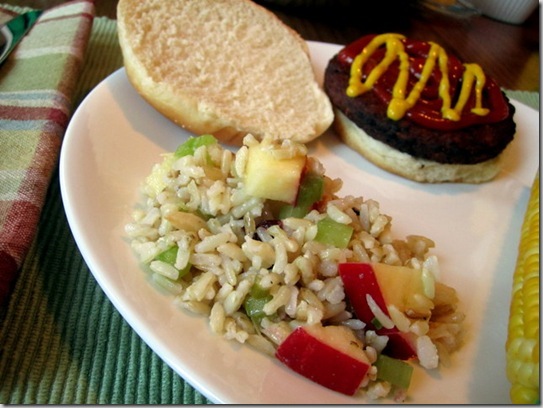 It had celery, apples, almonds, and dried cranberries, all mixed with a little lemon juice and maybe olive oil(?). Either way, it was delicious and I’m excited that Jay even said it’s something he’d eat again so I’m totally going to try recreating it.

**Edited to include the recipe! Courtesy of Kate, herself. Thanks, Kate!

1. Combine rice and water in medium pot. Bring to boil. Cover and reduce to simmer for 35-45 min or until rice is tender. Set aside to cool slightly.
2. Place apple in medium mixing bowl. Juice lemon over apple and toss to prevent browning.  Add rest of ingredients, rice last and toss to combine.

While we were sitting down to dinner, I was introduced to this awesome corn butter contraption which I am now in love with. Perhaps I’ve been living under a rock, since I’ve never seen one of these, but I SO need to get my hands on one for myself. 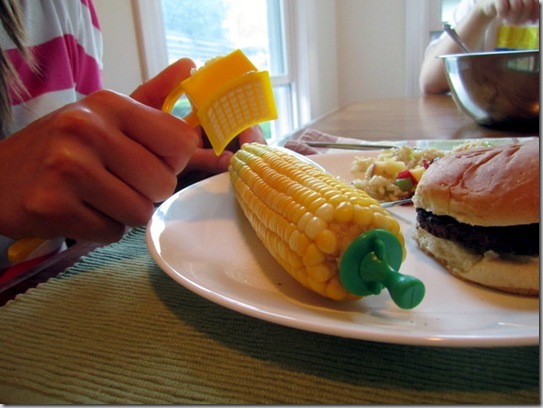 Growing up, my family always just had a separate “corn butter” that we would simply roll our ears of corn in. It wasn’t messy, and was actually fairly convenient, but I’m diggin’ this new little guy. Now if I could just figure out a way to make salting my corn easier…

After dinner, the four of us ended up sitting around the kitchen table catching up and having a little dessert. 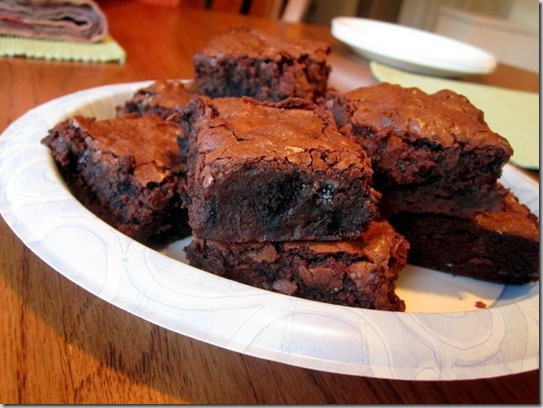 Yesterday afternoon, I had whipped up a batch of healthier brownies made with some crushed Oreos and they were deeeeelish. 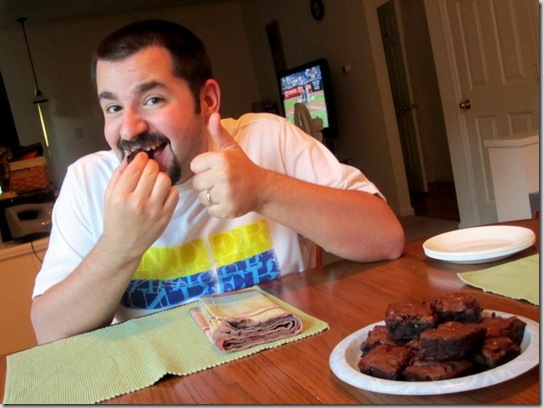 I ended up snacking on two (+ another bite) throughout the rest of the evening while sipping on a glass of Rosé wine. 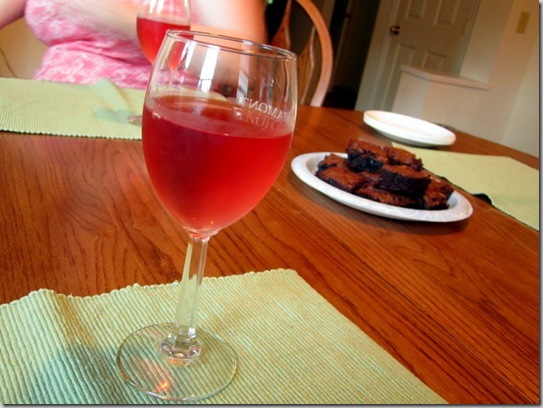 The four of us definitely had a few good laughs while sitting around the table last night…one of which was the fact that me and they’re cutie of a kitty, Iris, became good pals for the evening. 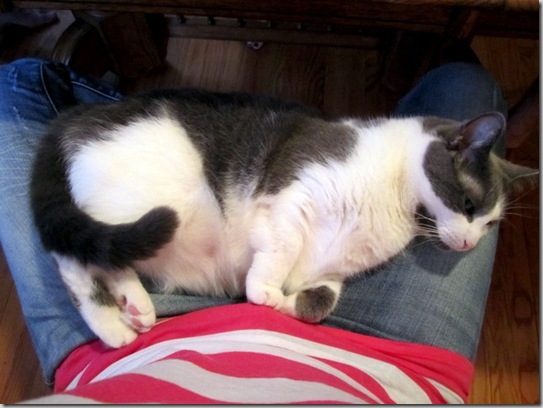 Apparently Iris doesn’t usually love the ladies, but me and her were like *this.* 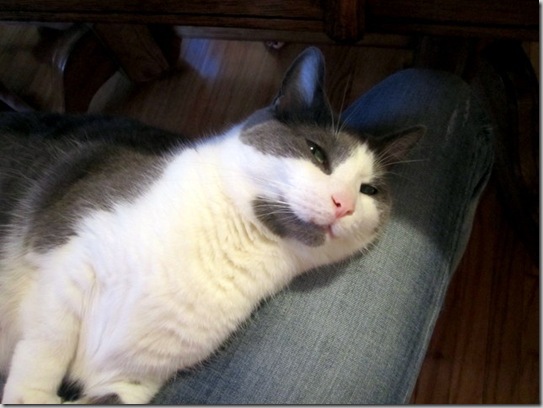 So one of the other things that had me laughing so hard I thought I might pee my pants was our viewing of some various YouTube videos. One of the videos, which I’d never seen before was flippin’ hilarious (Alyssa, I know you’ll appreciate this) by Jenna Marbles.

**If you’ve never watched Jenna Marbles, just be forewarned that she impersonates Pit Bull in this video and does not hold back with the cursing; so if you’re at work, you may want to wait to watch this one ‘til later if ya know what I mean…

Another video we came across that has made me laugh for YEARS now (and even still gets me every.single.time.) is this old TV blooper of two news reporters called “Black and Gus.”

Please tell me I’m not the only one who finds this stinkin’ hilarious?

I think the first time I ever saw this video was on one of those TV blooper shoes back in high school, and I can remember sitting in my parents’ living room watching it and absolutely losing it. Tears streaming down the face and everything. For some reason, it’s just one of those things that strikes me funny wayyyy more than it should, but good lord I love it.

Alright, off to work I go…catch you gators later!