I am absolutely loving today’s eats. Not because I tried one new food…but two new foods!

The first one came at breakfast: 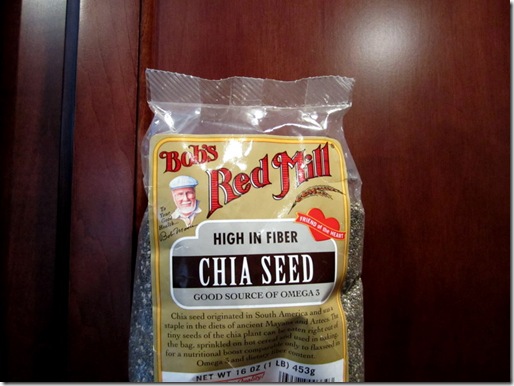 Many of you have probably already tried and are already loving chia seeds, but I’m just finally jumping on the bandwagon. I love how they’re such a great source of Omega-3’s, since I really don’t get enough of those day-to-day.

Well, this morning, they earned a coveted spot in my yogurt bowl. 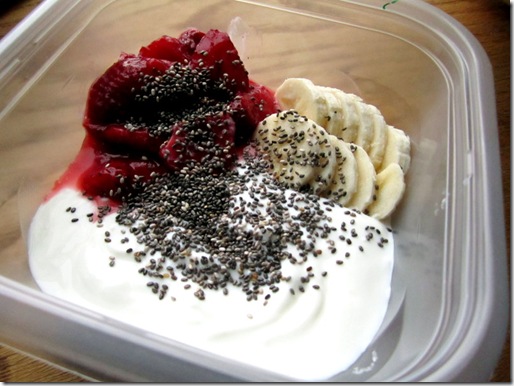 A mixed a vanilla flavored Chobani with half of a sliced banana, and the rest of the strawberries I had on hand from making my low-fat chocolate strawberry trifle, along with about a teaspoon of chia seeds. 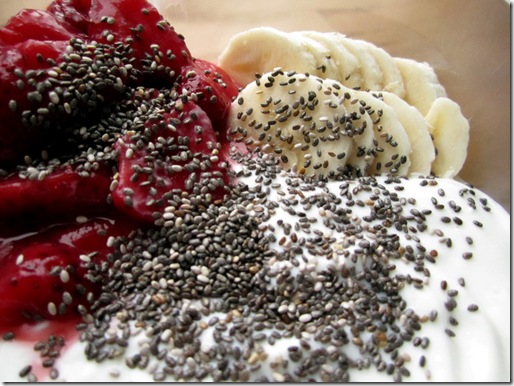 They actually added a really nice texture to the yogurt, but once I added my other mix-ins (1/4 cup Kashi Go Lean Crisp) I couldn’t really tell they were in there. 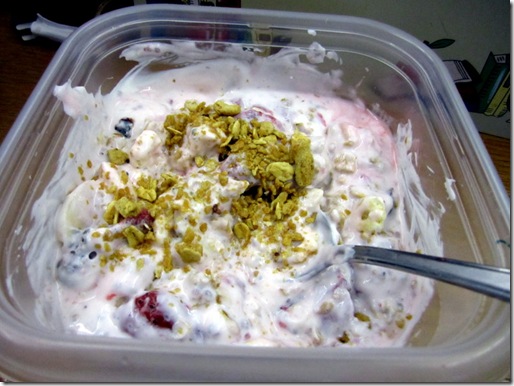 With some caramel macchiato coffee, of course. 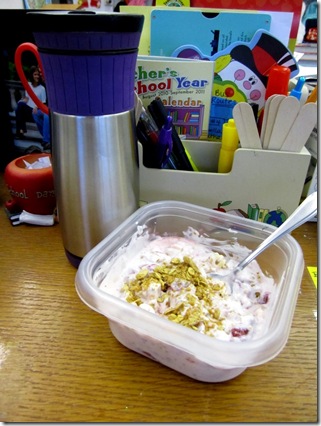 Today’s lunch was easy-peasy to put together, thanks to having the rest of my spaghetti squash leftovers. 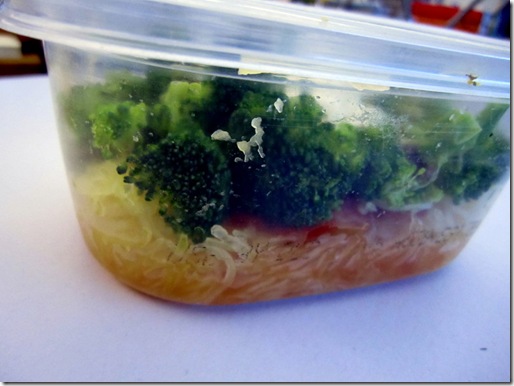 I simply topped my leftover SS with some marinara sauce, low-fat ricotta, and some broccoli that I steamed up last night…which obviously, if you look at it, was cooked a little too long. Hello, weird brown spots. 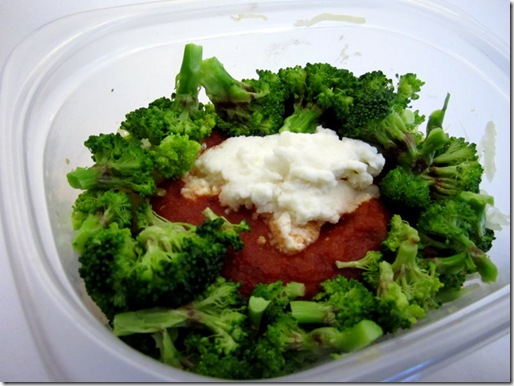 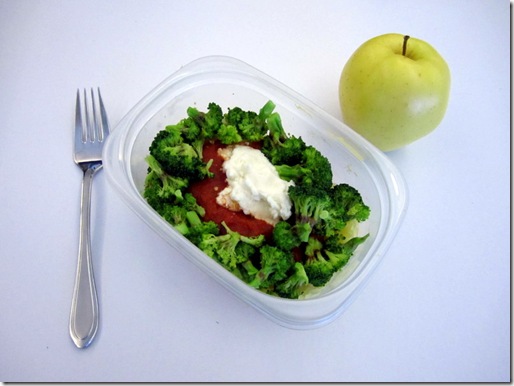 Around 3:00, I munched on that amazing golden delicious apple you see above, along with a couple Livin’ Spoonful Crackers. (Or as Jay calls them, my “bird seed” crackers.) 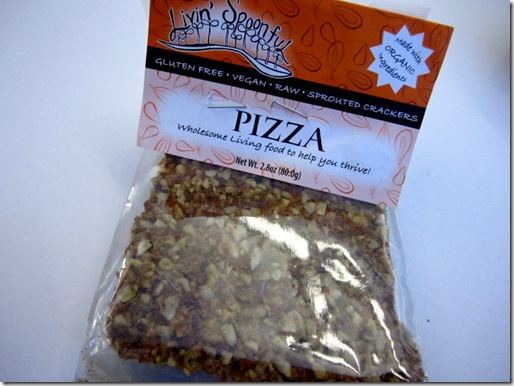 I had never tried the pizza flavor before, but I really like it! 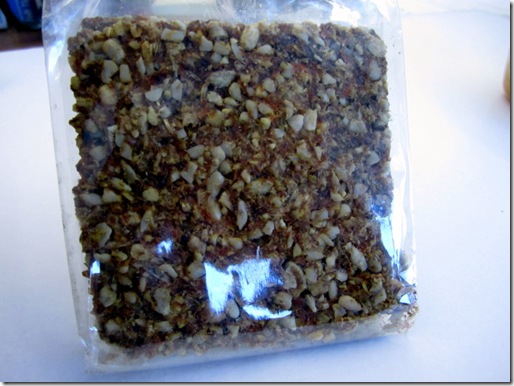 These snacks kept me fueled for my post-work workout.

I completed 20 minutes of HIIT, before heading to a BodyPump class. The instructor actually did the first half of the class with Release 61…goin’ wayyyy back! It wasn’t my favorite, but I will say that I was lovin’ me some Justin Timberlake’s “Sexy Back” for the triceps track.

As soon as I got home, I immediately got to work on tonight’s dinner, which included new food #2: 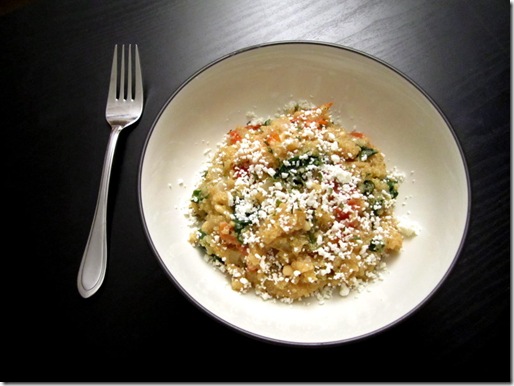 Thank you so much to everyone who linked up their favorite quinoa recipes. There were so many that sounded amazing, it was so hard to choose! I definitely have them all bookmarked, but I ended up deciding to play off of Kelly’s Bacon, Spinach & Tomato recipe. 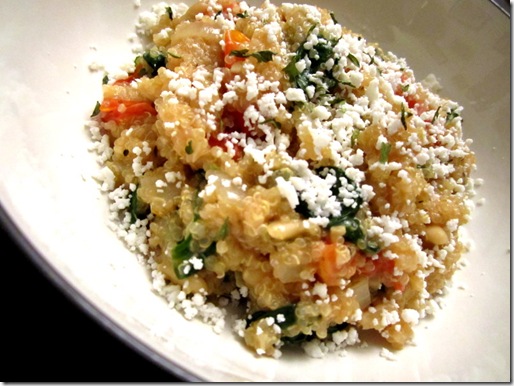 I made a few changes to her original recipe, one of which was omitting the bacon. To be honest, I’m sure the taste of the bacon would have been amazing…I just didn’t feel like cooking it and getting all greasy.

In place of the bacon, I decided to add some toasted pine nuts, along with a few other ingredients that made this dish a winner! 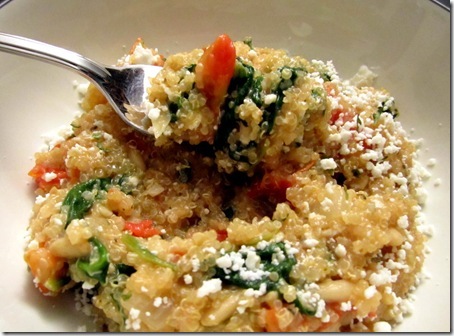 (adapted from this recipe)

Rinse quinoa and place in medium saucepan with chicken broth. Bring to a boil, then cover and simmer, about 20 minutes.

While quinoa is cooking, heat olive oil over medium-high heat in large sauté pan. Add garlic and onion, cooking until onion is translucent. Add spinach, tomatoes, and pine nuts, and continue cooking 6-8 minutes or until spinach is wilted and tomatoes are soft and tender.

Add sautéed vegetables to cooked quinoa, along with salt, basil, and dressing. Stir until combined. Top off with feta cheese. ENJOY! 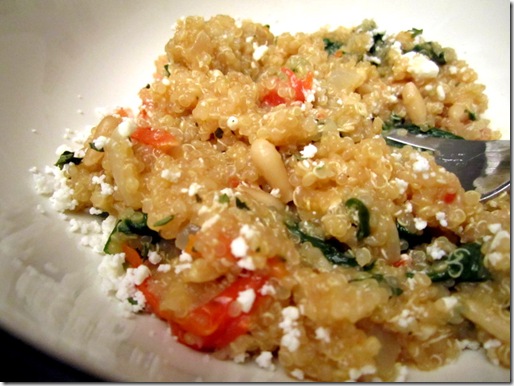 What’s the last new food that you tried? What did you think?

« Give Me Your Quinoa (Recipes, That Is)
Go Get Your Bid On »