I’m so glad I’ve decided to write these monthly updates for Lucas. I’ve already found myself going back to his older ones just to see what was happening and/or what has changed. My goodness, how things have been changing. Slowly but surely, Mr. Lucas is turning into a little human being that can do more and more everyday. 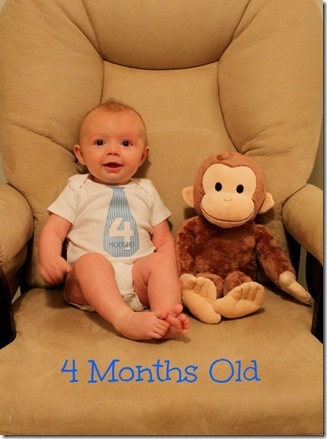 A few weeks ago, I was reading Ruthie’s monthly update post and really loved the way she outlined everything, so I’m totally stealing that for Lucas’s update this month. 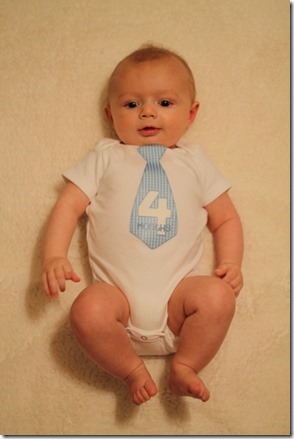 Eating: Lucas continues to eat like a champ. On days that he doesn’t go to daycare, I exclusively breastfeed him. On daycare days, he’ll usually take 2-3 bottles of breastmilk, depending on the day, and each bottle is usually about 4-5 ounces, depending on what I pumped. This month, he’s shown that he can become easily distracted while eating on occasion, so when that happens we need to move to a quieter area (usually away from the TV…he becomes mesmerized). He’s still quite the spitter upper, and some days I worry that he’s losing too much food, but he’s still gaining well so the doctor didn’t seem concerned. So for now, we’ll just continue to have him in a bib all day…every day. 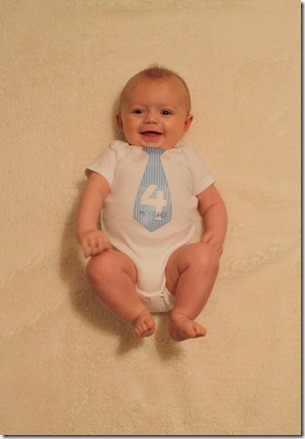 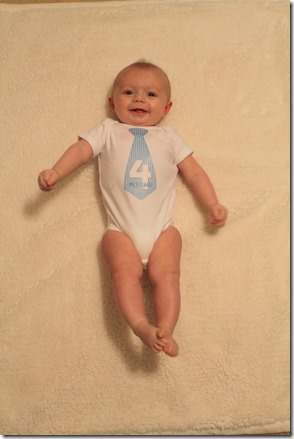 Sleeping (naps): At this point, I’d say 5 days out of 7, Lucas has gotten into a fairly good nap routine. His first two naps of the day are usually anywhere between 1-1/2 to 2 hours, and his third nap is usually anywhere between 45 minutes to 1-1/2 hours. Depending on his schedule for the day, he may or may not take a fourth cat nap, which is usually in his swing. For all naps (unless in the swing or a car seat) he’s swaddled and in the crib.

Sleeping (at night): Not too much change here from last month. He usually goes down around 7:15pm, gets a dream feed anywhere between 10-11pm, and gets up for the day anywhere between 6:30-7:00pm. There are some nights where he does sleep through the night without an extra wake up (and those nights are incredible). Most nights, he still wakes up once to feed quick (I’m back in bed within about 20 minutes) anywhere between 3-5am. If he does happen to wake up at 5:00am, he’ll sometimes sleep until 8-8:30am, so when that happens on the weekends, I’m ecstatic.

Unfortunately, we’re still having trouble transitioning him from his Rock ‘n’ Play to his crib at night. While he’s fine in the crib for naps, it’s a totally different story at night, which has left the two of us scratching our heads (and grabbing an extra glass of wine) quite a few times. I had originally planned on sticking with the transition and doing it while I was home for the Thanksgiving holiday, but we wound up back peddling, didn’t stick with it, and he’s still in the darn RNP in his own room. As much as I’ve loved that thing (he has always slept SO well in it), I really wish we had tried to transition him from it sooner. I know the longer we wait, the more difficult it could be…it just seems like every night comes with a “good excuse” to wait until the next night. Ahh well…we’ll get there eventually. Right? 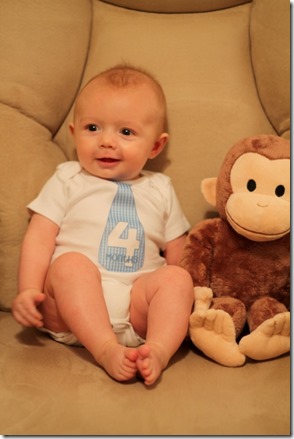 Clothing: Depending on the maker, Lucas is wearing anything from 3-6 months. Some 3 month clothes fit great (most of the Carters brand does) and some 6 month clothes fit just as well (the Babies R Us brand). If Lucas is going to wear full length onesies (long sleeves and pants) they almost always need to have feet; otherwise, they’re usually too short for his long limbs!

Social: I don’t know how we got so lucky, but we have been blessed with such a happy baby. Granted, don’t get me wrong…with that happy personality also comes a very strong personality. When Lucas is angry, he has no problem letting us know it, and can throw a pretty good tantrum. But overall, he really is a happy, smiley little boy that can melt my heart in an instant. 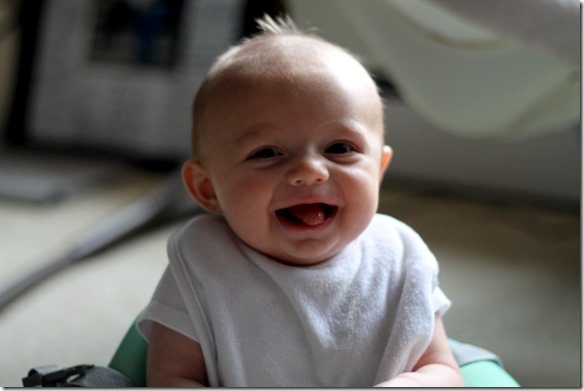 New this month: Month four has come with lots of new developments! Lucas has been talking up a storm, making all sorts of new sounds. One of my favorites is this sweet, gentle sound that almost always sounds like he’s saying “Hiiiii.” He’s a rock star at holding his head up on his own and can easily hang out while being held without the extra head support. He’s also shown a big interest in “standing” so figured it was a good time to break out his jumper. 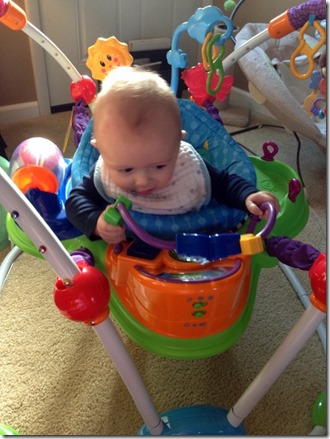 He proved us right…he loves the thing!

He’s also progressed from simply reaching out towards a toy to grabbing it with full force with one or both hands (which then usually goes straight to his mouth). 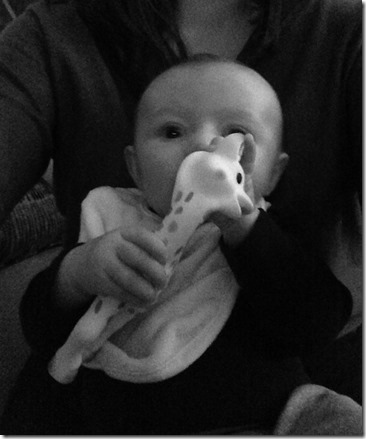 He’s fascinated by his feet, and this month he’s finally been able to get those toes of his right into his mouth. For that reason, trying to keep socks on those little feet is practically impossible. 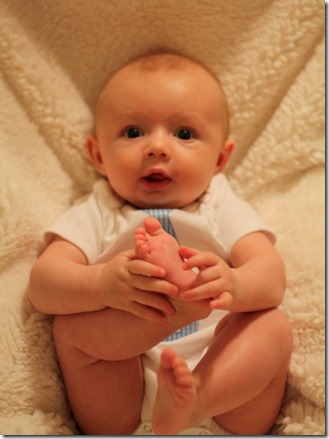 Lucas has also been rocking at tummy time. He’ll easily give us a good 10-15 minutes, and within the past couple of days, he starts kicking his legs/feet like a mad man, pulling his knees up to his chest, and half rolling his butt side to side. 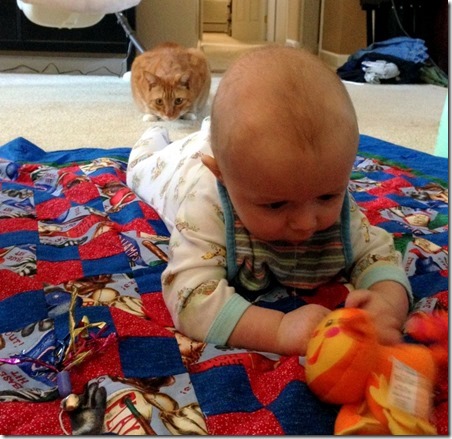 Full rolls from tummy to back and back to tummy are still rare, but he’ll occasionally do one or the other with a little extra push.

Likes: His Taggie, Sophie the Giraffe, reading books, listening to music (he loves Bruno Mars and the Raffi station on Pandora), having me and Jay sing to him (he’ll give us some of his best laughs when we sing together!), his swing, the piano mat, playing “airplane” with daddy, being swaddled, watching football and Jake and the Neverland Pirates on TV

Mommy: Overall, I’m doing great! I’m feeling good about being back to work, and even though my days are usually busy from start to finish, we’ve got a pretty good routine going that seems to be working well for everyone. There’s been a few times recently where I’ve felt a little overwhelmed, but I think that’s normal (right?). Recently, Jay and I were also talking about how we sometimes miss the ability to be spontaneous – to be able to just hang out with friends or go out to dinner on a whim. Don’t get me wrong…we would obviously not have our situation ANY other way. I love being a mom to this sweet boy of mine. But if I’m being honest (as I usually try to be), I do sometimes miss my ability to be a little selfish with my time. Hey, maybe in another, what, 18 years? 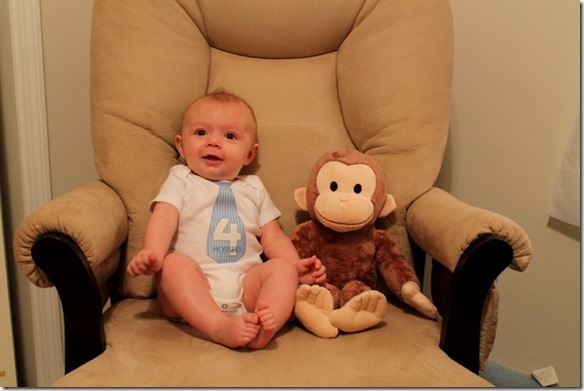 Happy 4 Months, sweet Lucas. You make me fall more and more in love with you each and every day.