As delicious as this morning’s breakfast was, it didn’t do a very good job of sticking with me. I think that if I were to try that breakfast again, I’d most definitely have to add in a protein source- maybe a hard boiled egg, or a tablespoon of peanut butter to dip the extra apple slices in.

Either way, I didn’t think to do that today, so my tummy was already starting to grumble by about 10:15. Good thing I had a snack ready and waiting for me!

A cup of vanilla Chobani topped with fresh strawberries (which, by the way, are delicious right now) and some chia seeds. 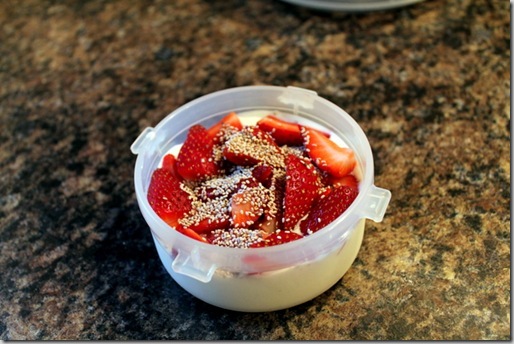 Gotta love those chia seeds! Especially when they’ve been sitting for a while and start to plump up from the yogurt.

Today’s lunch was pretty easy to throw together, thanks to leftovers from last night’s salad and some other prep work I did earlier in the week. 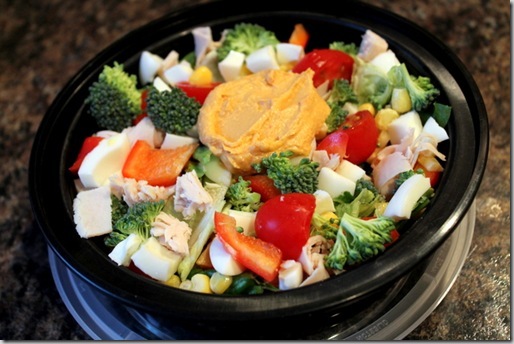 I used up the rest of the salad leftovers (plus some extra veggies) and topped it with a hard boiled egg (mostly just the whites because the yolk of hard boiled eggs kinda gives me the creeps), 2 slices of low-sodium deli turkey, and two tablespoons of roasted red pepper hummus. 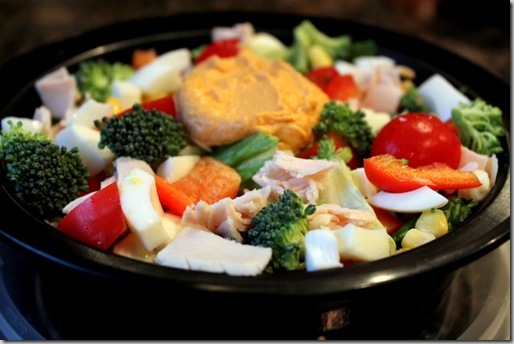 Colorful and flavorful…just my style. ;)

I also have an orange and some roasted almonds to have later this afternoon. I’ll tell ya…I’m really loving these almonds but I think I need to try soaking them in water. Someone else had previously mentioned that and it sounded genius – who was that?!?. 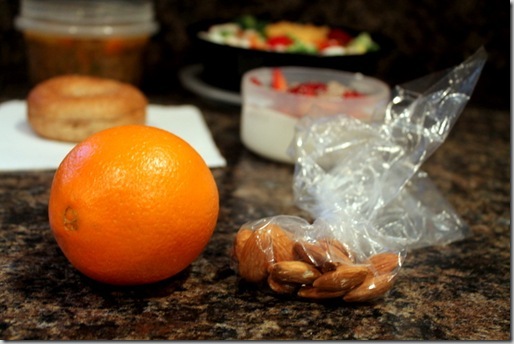 Since today is a long day of work, I also packed up dinner to have later tonight, too. Do you guys remember when I made that Spinach Lentil Soup a few months back? Well I recently took the last batch of it out from the freezer and brought that to with me today, along with a whole wheat mini bagel for dippage. 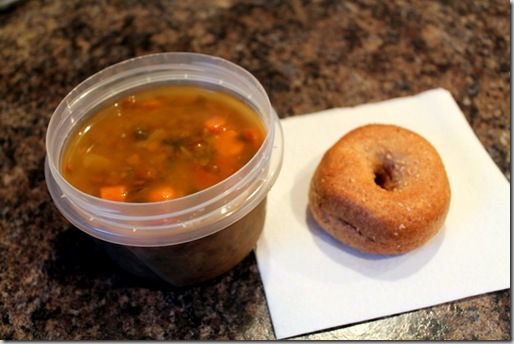 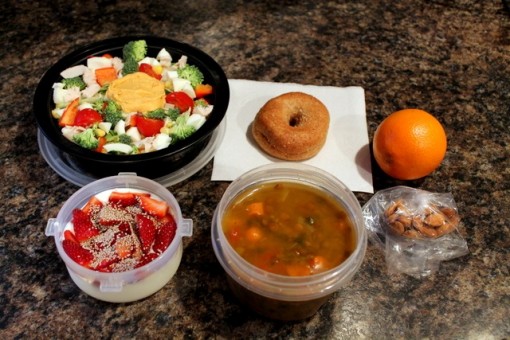 I took today as my rest day from working out since I was really in need of sleeping in this morning (that 4:30am wake up call yesterday morning did me in) so no BodyPump like usual. I actually have another early morning wake up call for tomorrow morning (oh, hello again insane time of 4:30) so this week may include more rest days than normal. Something like this used to bother me and make me feel really guilty, but hey, ya know what? Sometimes life happens and things get in the way. I’m pretty sure I’ll survive. ;)

Do you try to include protein in all of your meals?

What are some of your favorite sources of protein for BREAKFAST?

Do you feel guilty for taking extra or unplanned rest days from working out?

« My Favorite Thing About Celebrating
Already Counting Down »