Well, acupuncture is definitely quite interesting…and it has me rather intrigued at the moment! Let me give you guys the low-down on my session today…

When I first got to my appointment this morning, the acupuncturist and I spent about 15 minutes doing a brief consultation. We had already emailed back and forth once or twice before today, so he already knew some background information.

We briefly discussed some of the things that I would like to try and “heal,” so to say, with my body. I told him that I’d really like to try and focus on a couple different things, with one of them being my stomach issues. If you’ve been reading for a while now, then you probably already know that I have my fair share of stomach issues (bloating, IBS, pain, etc.). I’ve been pretty unsuccessful in figuring out the cause for my problems thus far (allergy testing wasn’t really a huge help), so I figured this could be an area to focus on.

Once we were finished talking, he had me lay down on a table and then proceeded with the insertion of the needles. Overall, I’d say that I probably had about 20 needles in me when all was said and done; a couple in my feet and hands, a majority of them in my belly, and a few of them in the face…yes, the face.

The sensation I got when he inserted some of the needles was almost immediate, while others gave me know sensation at all. Not surprisingly enough, the ones that seemed to be the move prevalent were those in my stomach.

Almost immediately, I could feel the needles start to twitch, which he told me was a sign of the energy releasing and moving from the body. A couple of them also gave the feeling of pressure around the area; almost like the throbbing sensation you get when you close your finger in a door, if that makes sense? It was as if I could feel the muscles tensing up and then relaxing, which was one of the weirdest things ever.

Once the needles were in, he left the room for about 15 minutes to, as he said, “let them cook.” I found that pretty funny. I also wanted to see if he was pulling my leg on the needles heating up, so I placed my hand over my stomach (I had been too nervous to move up until that point) and sure enough, I could feel heat. Quite a bit of it, actually.

Overall, I wouldn’t say I was quite like smiley up above there, but I definitely didn’t mind it. I wasn’t able to get super relaxed during the procedure, just because it was all so new and honestly, I little weird at first. I was afraid to move much of anything for fear that a needle would end up puncturing something important…obviously, I don’t know much about this stuff yet.

We spoke again briefly afterward and he gave me some homework: start taking a probiotic everyday, and do a three day food journal. I’m willing to do that and see what he says, but I’m debating on whether or not I want to continue with more sessions. I’m hopeful that it could be help me, for more reasons than one that I’ll probably get into another time, so it’s definitely something for me to think about. Unfortunately, it doesn’t come cheap, and he’s also about a 40 minute drive away.

So I guess I’ve got a few things to think about (and talk to the hubs about) but honestly, if it will help me with what I need help with, then I’m willing to find a way to make it work. I’ll be sure to keep you guys in the loop!

Wow, long-winded up there. Let’s keep this brief. Once I got home from my appointment, I put together a quick and easy lunch. 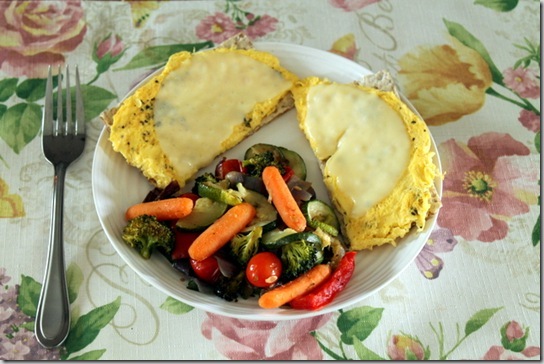 The rest of the roasted veggies leftover from last night… 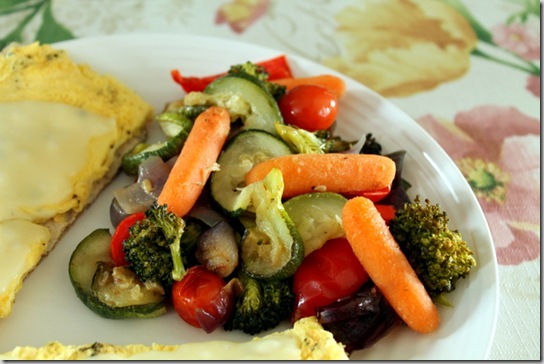 …and a couple Wasa crackers topped with an egg patty + melted provolone cheese. 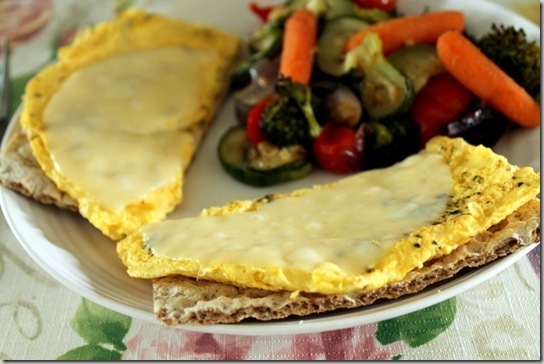 I was in the mood for a little something sweet afterward, so I snagged two caramel eggs from my leftover Easter candy bag. 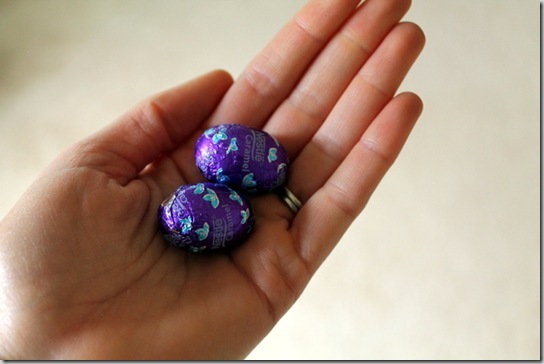 Time to go take care of a few things around here…catch ya later!