Gosh, I just love me some Chipotle. 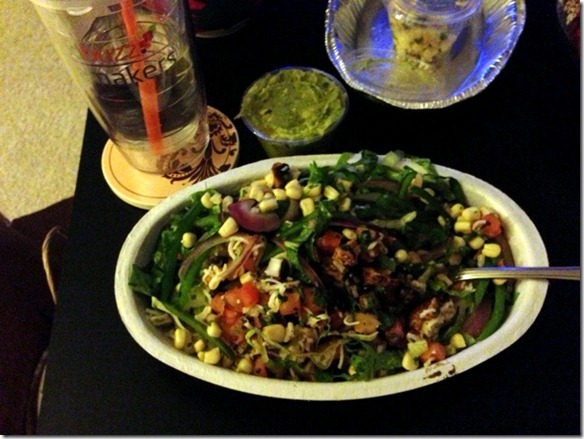 Last night was one of those nights where I was trying desperately to avoid my cravings for this good stuff and save money by just eating in. Jay ended up having to work later than normal, so I was joking around with him, saying that he should pick some up for dinner on his way home. Well, the time kept ticking on by and I was getting huuuuungry. Then I find out he’s going to be at least another hour and a half. No bueno.

I tried searching around the kitchen for something that could satisfy my cravings, but I had nothing. Nothing but Chipotle on the brain, that is.

So, I did the only feasible thing…I went out and picked it up myself. 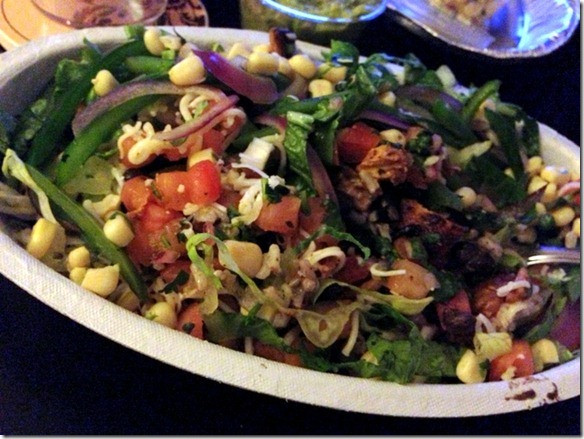 Had I not been feeling so incredibly lazy, I could have just gone out and gotten it from the get-go, but hey, there’s laziness for ya. I ordered myself an amazing chicken burrito bowl with brown rice, black beans, mild salsa, corn, cheese, and lettuce. Of course, I also had my side of chips and guac, which you can’t totally see, and I actually managed to save some for Jay to have with his burrito bowl that I got him for when he got home. Such a great decision.

Since I scarfed down my burrito bowl in no time flat, I spent the next hour or so curled up on the couch with my buddy, reading my new book.

I’ve loved ALL of Emily Giffin’s books so far, and have been waiting since the summer to get my hands on this one. I finally bought it for myself off of Amazon on Cyber Monday and am so excited to get into it more. I’m only into about the fifth chapter, but it already seems pretty good, and I’m hearing great reviews from others who have read it.

I have a lot to do today, and I’m pretty sure my body must have realized it because I woke up around 6:15 with no alarm and was wide awake. This never happens to me, my friends! So I took advantage of the early start time and was able to bust out about three things on my list, all before 8am. Woop woop! 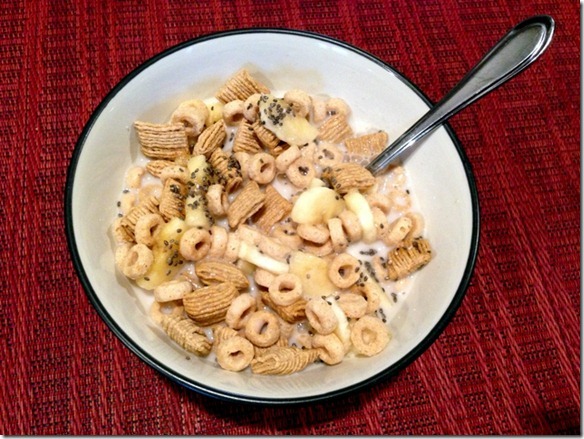 Today’s bowl included Quaker Oatmeal Squares (in honey nut flavor – YUM!) and plain Cheerios. Well, actually, they’re Target brand “toasted oats” and are not the kind I meant to get. I was a total dope, didn’t real the box, and accidentally picked up the plain over the honey nut. Booooo. 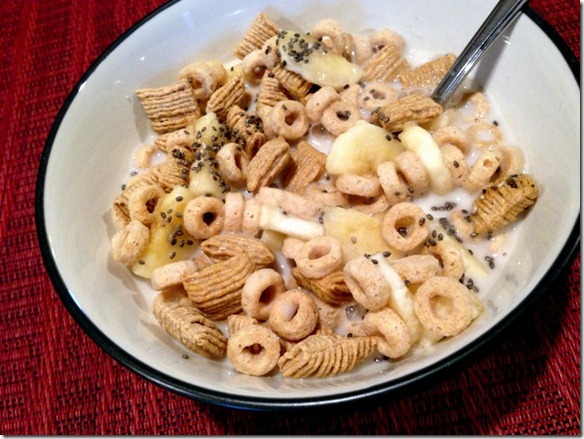 And, of course, I bought the big box of them too, so I have quite a bit to work through…maybe I’ll have to get creative and use them for something else. Any ideas?

Two giveaways in two days?? Crazy, I know! First things first, thanks to everyone who entered.

The (2) winners of the Cookbook Giveaway are Tessa and Kaitlin:

And the winner of the Santa Barbara Chocolate Giveaway is Kerry Cartledge:

Congratulations to all of the winners! Please email me at sweettoothcourtney at gmail dot com so we can get you set up with your prizes!!

It’s about time for me to get back to business…who’s psyched that it’s Fridayyyyy???