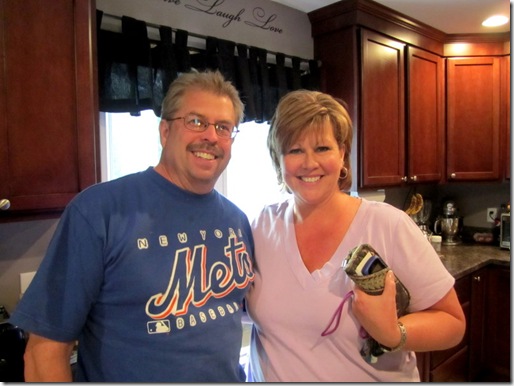 This morning, I called up the ‘rents to see what they had planned for dinner and whether or not they wanted to come and help us figure out if we could seat four people at our new kitchen table. Luckily, they were free…

And better yet, we can seat four people at the table. It’s a tight squeeze, but it works. 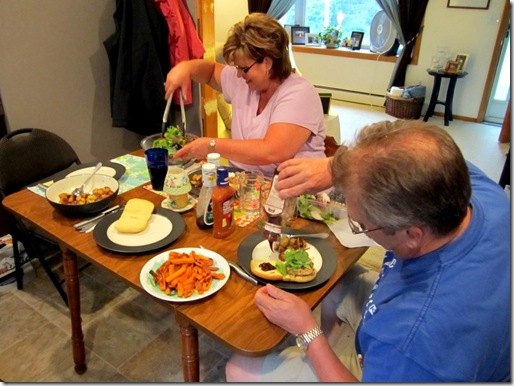 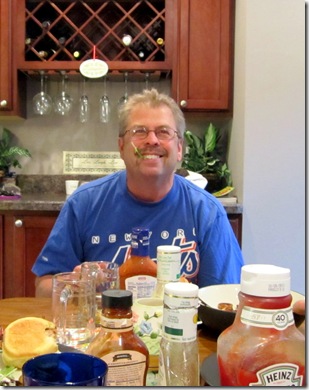 My dad sure is a character, and I can guarantee he didn’t think I’d put this picture up. Mwaaahahaha.

Tonight’s dinner is not going to look a whole lot different from what you’ve been seeing lately. Sorry…but the grill is now in mid-season form and will continue to be getting quite a workout.

I’ve said it before, and I’ll say it again…there’s nothing like grilling when the weather warms up!

Especially when hubby works his magic and makes some of the most amazing grilled chicken I’ve ever had. Not kidding. 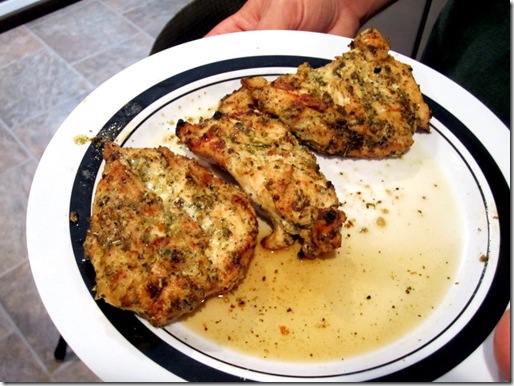 His secret? Bread dipping seasoning blends. They’re soooo full of flavor, so he likes to mix those, along with some EVOO + water when marinating. We often use this blend of spices, which has proven to be quite versatile. It’s our absolute favorite. 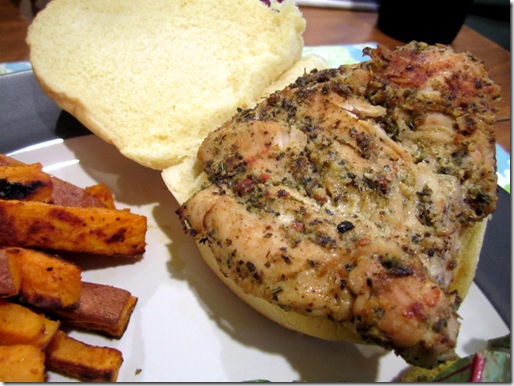 Seeing as it’s so versatile, I also decided to take a stab at the bread dipping seasoning methods today when making a batch of oven roasted potatoes… 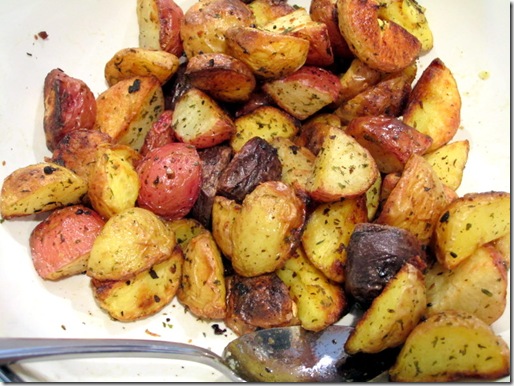 I just quartered up a bag of Tasteful Selections potatoes, drizzled them with some Tuscan Blend seasoning and a little EVOO, and roasted them in a 425 degree F oven for about 45-50 minutes. Perfection.

And since I happened to notice a lone sweet potato that’s been waiting to be eaten, I decided to cut him up into some fries and baked those as well. 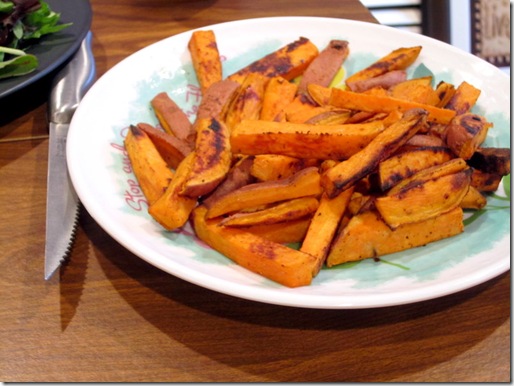 These potatoes all probably turned out to be one of my best batches yet, and I’m going to tell you my secret…

Soak the cut potatoes in water! After cutting both batches of my potatoes today, I put them in a big bowl of water and let them sit for probably 3-4 hours. I saw them talk about it on the Food Network once, and I’ll agree that it definitely helped add a little extra crispness to them, without drying them out. They were super duper. 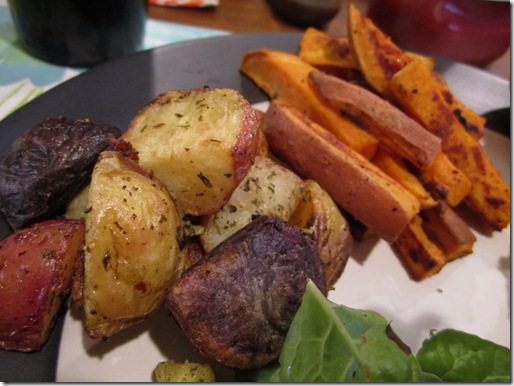 To round out the meal, I also made a big veggie salad, which was good…but I was all about the potatoes today. 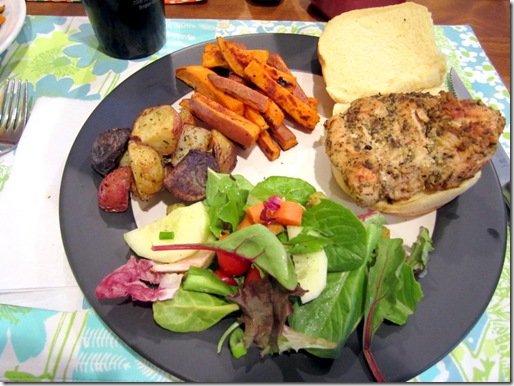 When my mom asked if there was anything she could bring over for dinner tonight, there was one thing that immediately popped into my head… 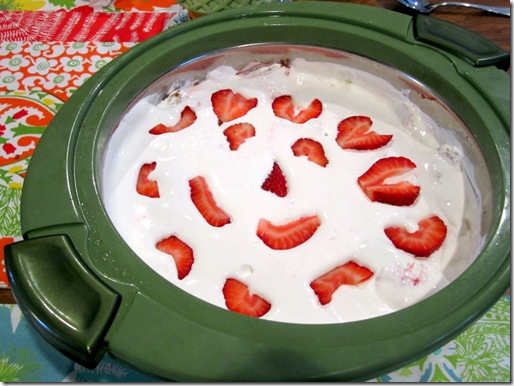 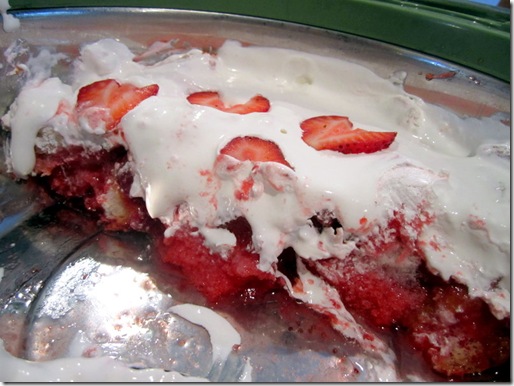 Jay gave it a quick sniff test, and then we were good to go. 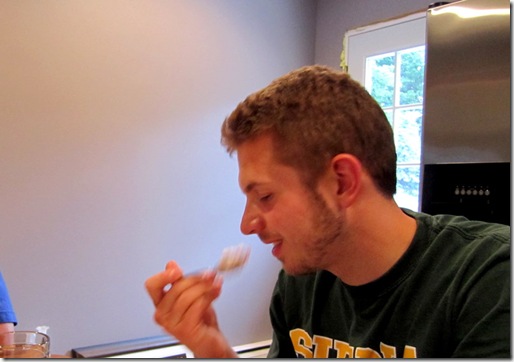 So I threw caution to the wind and practically dove head first into the bowl. Apparently, I had no concept of portion size or self control with dessert tonight. 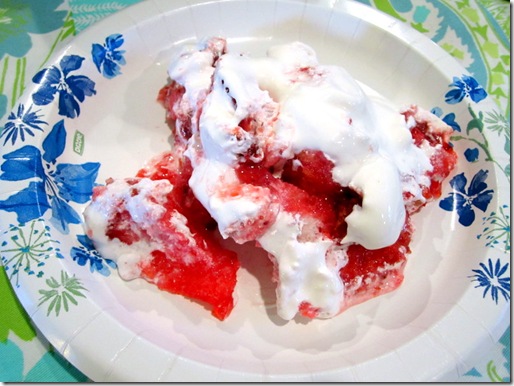 Because what you see there? Yep…you can go ahead and double that. Let’s just say, the bowl was completely empty by the time I was done with it.

Whew! I guess it’s a good thing it was angel food cake and strawberries, rather than chocolate and cookies, right?

I just realized that the MTV Movie Awards are actually on tonight, so I’m planning on throwing on some cozies and planting myself on the couch to watch ‘em. I better get a move on though…my favorite part is all the red carpet fashion!

What is one dessert you really lack self control with?

Mine would be this dessert…and ice cream. Always ice cream.

« The Perfect Balance
It’s A Good Thing I Like Him »