Well, after a really, really nice weekend, it’s back to the grind today.

I already shared a little bit about my Saturday and Sunday, and our actual Memorial Day yesterday was also pretty low-key. Jay and I both had some things to do around the house, but other than that, I was left with a good amount of downtime which was nice. It actually gave me some time to do a little reading, as well as a little reflecting.

I’ve been feeling a bit more emotional lately (surprise, surprise!), and I think the combination of that, along with it being Memorial Day and just feeling so grateful for so much, really helped put a lot of things into perspective for me. Sometimes I tend to allow myself to get so worked up over things that, in the grand scheme of things, really are so minor. So to be able to find a little clarity yesterday was really refreshing and very much needed.

(I actually talk a little bit about some of the emotions I’ve been feeling in today’s Baby Tooth post, which was updated today.)

Don’t get me wrong though…all is good! Just sharing some my random tidbits and thoughts with you all this morning.

For dinner yesterday, I decided to take some time and effort to make an actual meal. I know, who knew, right?! “Real” dinners are becoming a rarity in our house these days, thanks to our ever-busy schedules (and my decreasing desire to put much effort into anything). But since I knew last night was basically the only night this week we’d both be home for a real, sit-down meal, I decided to make something nice…and I’m SO glad I did. 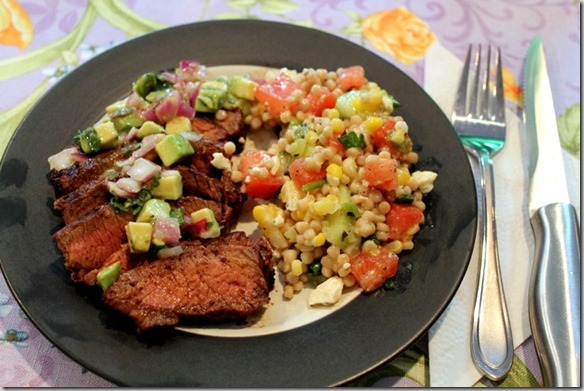 As I was cleaning out in the living room the other day, I came across one of my more recent issues of Cooking Light magazine, which I think I had totally forgotten about. It actually has a ton of good recipes in it, and I decided a couple of days ago that I’d make the Spice-Rubbed Steak with Avocado Lime Salsa. It was a ridiculously easy recipe, and oh my gawwwwd was it good. 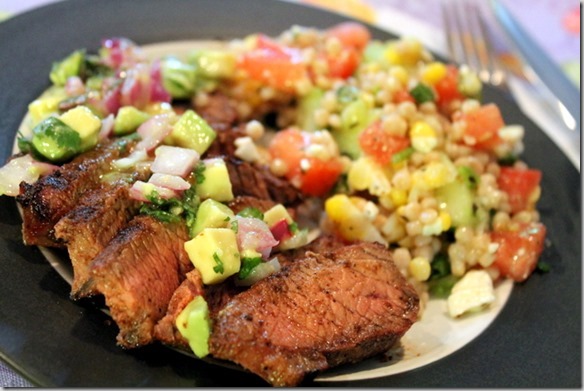 Doesn’t hurt that Jay grills a pretty mean steak, too. ;)

As for the side, I was in the mood for some sort of a light, summer-like salad and I really wanted couscous. I’ve had a bag in my pantry for ages and it just sounded great. So I did a little searching on the ol’ internet and found a recipe for Summer Garden Couscous Salad from Taste of Home. 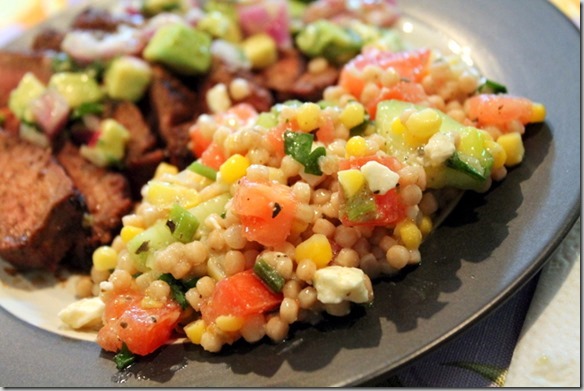 You guys…it was amazing. And easy. AND it makes a TON so I still have a bunch of leftovers for the week. I’m so freakin’ excited.

Later today I have my 32-week prenatal appointment and then shortly after that Jay and I have our first childbirth class to attend. It’s gonna be a long day, but I’m excited for everything that’s happening later this afternoon!

How was everyone’s Memorial Day? Do anything fun or exciting??