It felt so nice to be just a little bit lazy this morning. I took my time reading through emails, sipping my coffee, making breakfast, and just relaxing. It really was great.

Breakfast was thrown together in a pinch, since my craving for this morning was a big ‘ol cereal combo bowl. 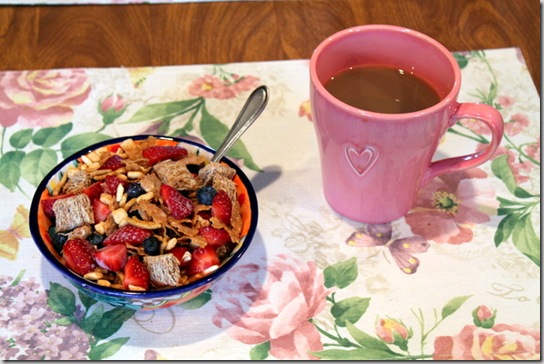 I also learned a very important lesson this morning…my new favorite Mexico bowl is not ideal for a whopping cereal combo. As I was making it – and proceeding to spill cereal all over the counter and floor – Jay announced, “Geez, no wonder the floor is always dirty.” 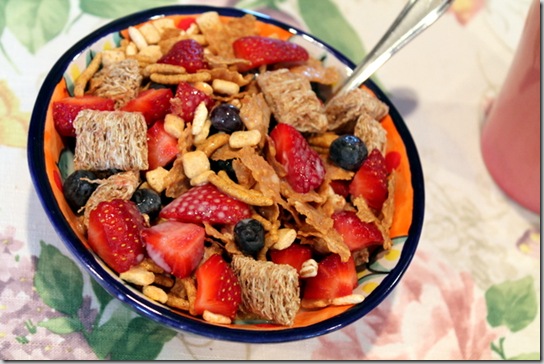 So I’m not sure whether or not it was because I had such a lazy morning, but when it came to my scheduled workout for today, I was seriously just NOT motivated. My muscles were pretty sore from yesterday, and I found myself coming up with excuse after excuse for skipping out.

But then, as I was continuing to waste time on Twitter, I began coming across tweet after tweet in my #FitFluential hashtag from people who were seriously kicking butt with their workouts for today. And just like that, the power of social media reigned supreme, and I was able to muster up the motivation for bust out today’s 50 minutes of cardio…which looked a little somethin’ like this: 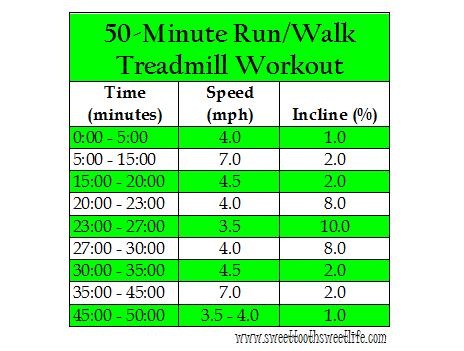 I wasn’t totally in the mood to run today, so I incorporated both some running and incline walking. Believe it or not, I was actually counting down the minutes until I  could run again at minute 35. That block of incline + power walking in between was KILLER!

**Just in case you’re interested, since I know many of us don’t always have time for 50 minutes of cardio a day, I also put together a shorter, 30-minute version of this workout which you can SEE HERE.**

Sometimes it really does amaze me just how influential social media can be on my own (and others’) healthy living goals. Whenever I’m feeling sluggish, crappy, or just straight up unmotivated, turning to Facebook, Twitter, or some of my other favorite blogs seems to always do the trick. I just love the motivational support!

Anyone else feel that way??

This afternoon I have some errands to run, including a meet up with Mal and Sarah and check out wedding dresses for the newly engaged one. Soo exciting! Catch ya later!

« Another Reason To Celebrate
The Highlight Of My Day »