Today has definitely been one of those days that is just “GO GO GO” – from 5:30am this morning, until 9:00pm tonight, when we finally walked in the door.

Nonetheless, despite being super busy, it has been rather productive!

At 5:05am this morning, my alarm was definitely not on my good side. After the second round of “snoozing” I really debated on skipping my AM workout all together. However, I knew I’d be mad at myself if I didn’t get up (since I really didn’t have a good excuse), so I sucked it up and tumbled out of bed. I had already planned on doing the Rock Hard Total Body Workout on Exercise on Demand…I was wicked excited when I found out it was back on! I can already tell I’m going to be sore tomorrow…LOVE that. ;) 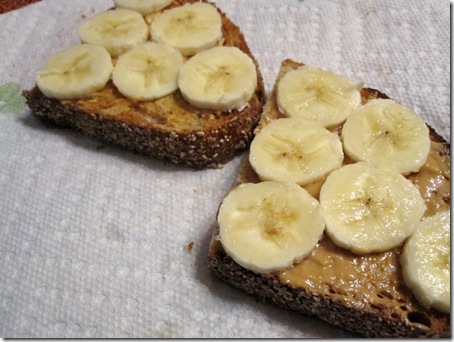 The only difference was that BOTH pieces got the pumpkin cream cheese + PB + banana treatment today. It was absolutely fantastic!

So was my Caramel Macchiato coffee. ;) 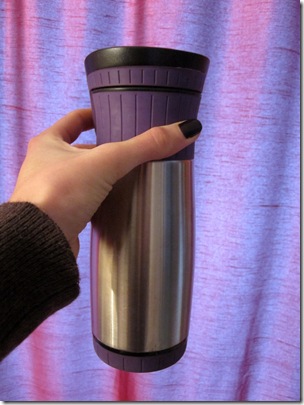 Thanks to my enormous “Tuna & Rice” salad from last night, I had plenty of leftovers to incorporate into today’s lunch: 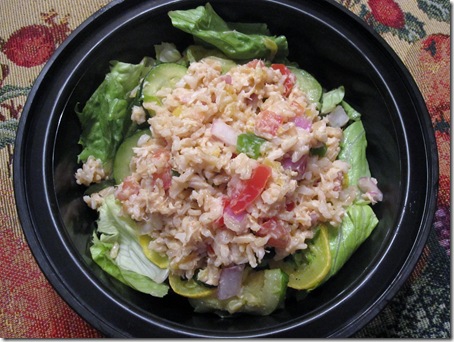 I took a big ‘ol scoop of leftover salad, along with some leftover roasted veggies, and added a little romaine base for some added bulk. It was just as good the second time around! 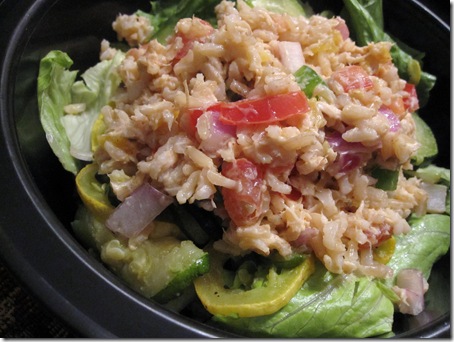 I also enjoyed a nice crisp Gala. It was so sweet and juicy…yummmm. :-P 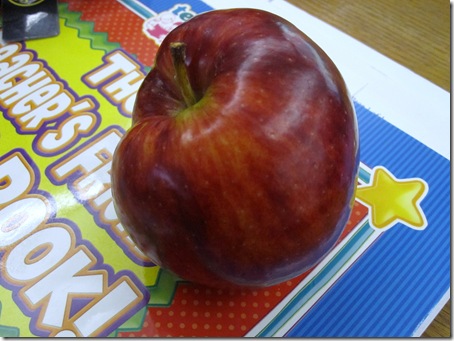 After work began my afternoon of errands…one of which included a flu shot. BLECH. Needles really don’t bother me at all, so it’s not that; it’s more the fact that every year I get a flu shot, I always end up getting “sick” with cold-like symptoms from it a few days later. If it wasn’t for my darn asthma, I don’t know if I’d even get one…keeping my fingers crossed for this year! :shock:

I started feeling a little sluggish this afternoon, so I decided to stop for a little caffeine pick-me-up. It did nothing for my energy, but it still tasted delish. 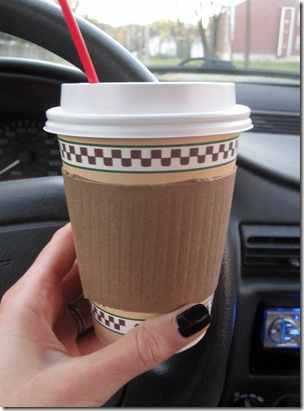 After finishing up some more errands, Jay and I decided to stop for some dinner. We were out in the Schenectady area, which we aren’t usually near, but I was pretty excited because there’s a restaurant out there I’ve been dying to try: Tops American Grill, Bakery, & Bar. 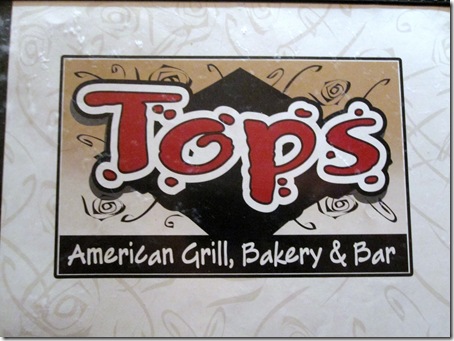 I thought the inside was so cute! It definitely had a fun, welcoming look to it. And how ‘bout those palm trees? :) 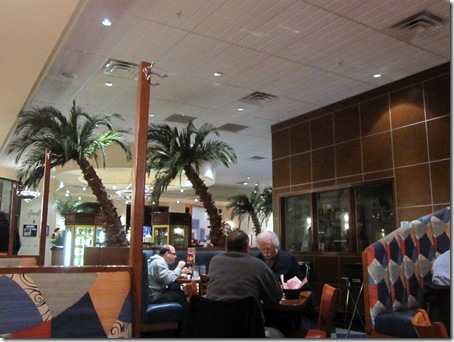 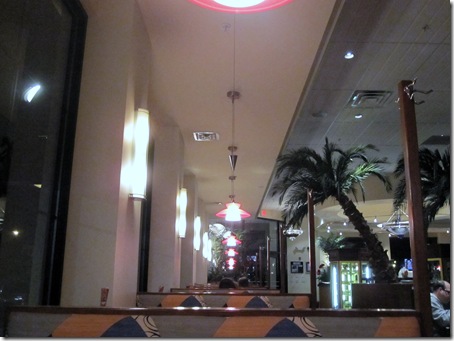 For my dinner, I ended up choosing something totally random: Roast Beef. I can’t even tell you when the last time was that I ordered roast beef. Years, probably. 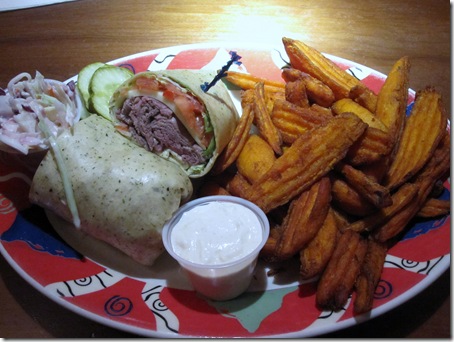 What I can tell you though, is that I’m so glad I did. It was delicious! Roast beef, provolone, roasted red peppers, lettuce, & tomato in a garlic and herb wrap. It also came with horseradish mayo, which I got on the side. 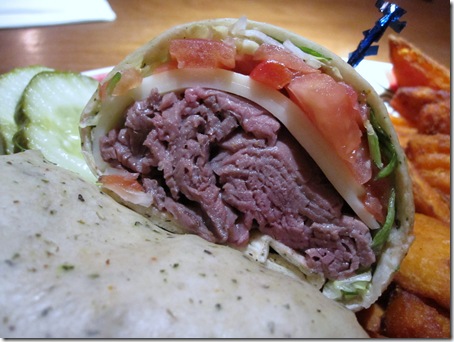 As good as the wrap was, the sweet potato fries were what stole the show on this plate… 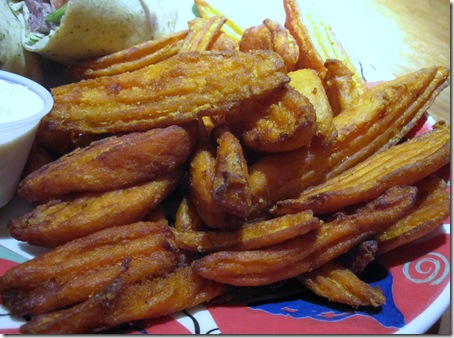 I’m tempted to say that these may be the best sweet potato fries I’ve ever had. As soon as I started eating them, I kept getting this weird taste of “doughnuts” – I mentioned it to Jay, who initially thought I was nuts.

A minute or two later though, and all of a sudden, hubby was on the same page with me! We both agreed that there was definitely a doughnut flavor coming from somewhere inside of these. Incredibly odd? Yes. Gross to some? Maybe. But they were right up my alley. 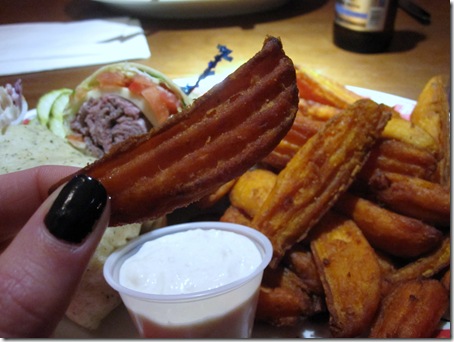 As soon as you walk through the doors of Tops, you are face-to-face with a mouth-watering display case of homemade desserts. I had been thinking about that case from the second we sat down, so I knew I was not leaving there without some. I decided to save half of my wrap, so I could indulge in a little big slice of heaven:

Oh chocolate, you are so divine. 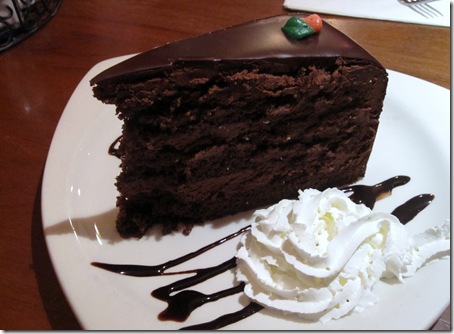 Jay and I split a piece of their Chocolate Mousse Torte… 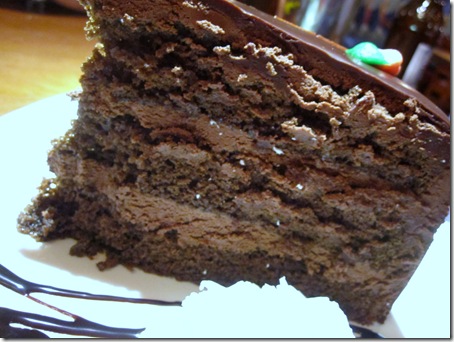 Which we obviously hated. ;) 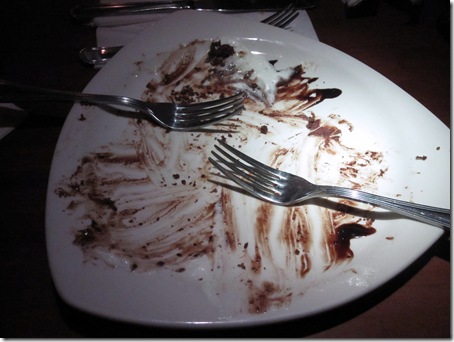 I’m so thankful for the fact that I have the day OFF tomorrow! (Thank you, Veterans!) I’m really in need of some extra zzzz’s tonight, and I have a good amount of housework to catch up on tomorrow too. But for now…it’s time to go start on those zzzz’s! :)

Have you ever eaten foods that remind you (either taste or smell) of a completely different food?