I had no idea why my alarm was going off, what time it was, or even what day it was. To be honest, I still thought it was the weekend! So coming to the realization that it was not only Monday morning, but 5:15 on a Monday morning was a total buzz kill. A couple hits of the snooze button later, and reality had struck for good.

Ahh well, it was time to tackle the day…and get started with a workout.

I did a little strength training, thanks to the 10lb. Slimdown BLAST workout, and then followed it up with a quick 10 minutes of running on the treadmill. I probably could have done more if it wasn’t for the numerous snoozes.

I had a strong hankering for peanut butter this morning! But since the beloved goods are not allowed at school, breakfast was consumed at home. 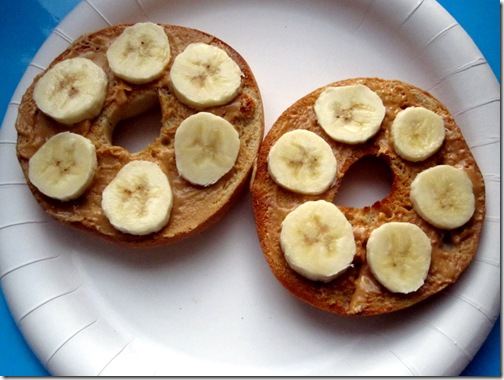 I lightly toasted a Weight Watchers bagel, and topped it with some PB & banana slices. 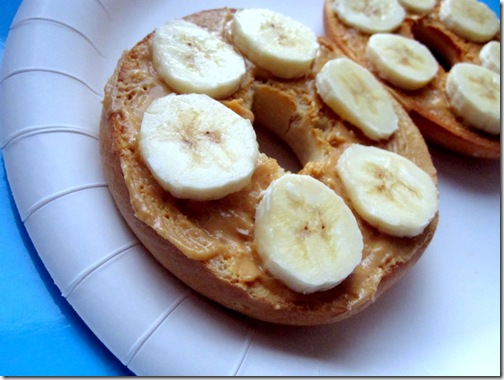 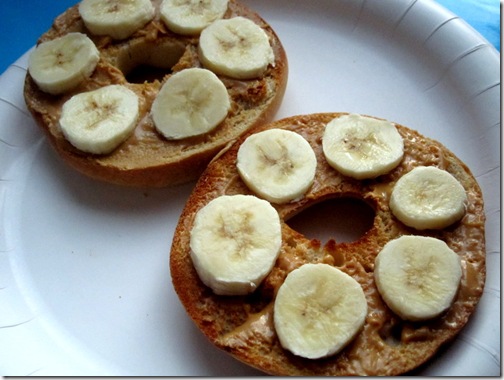 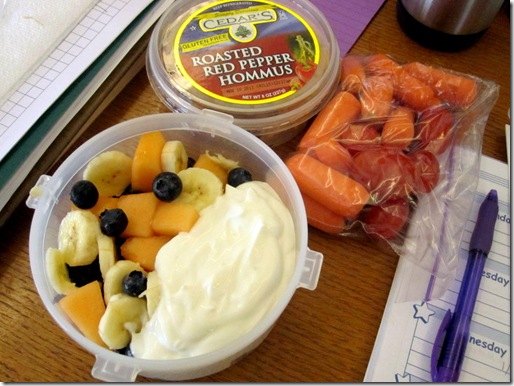 What can I say, I’m a creature of habit – hence my goal to be more spontaneous. 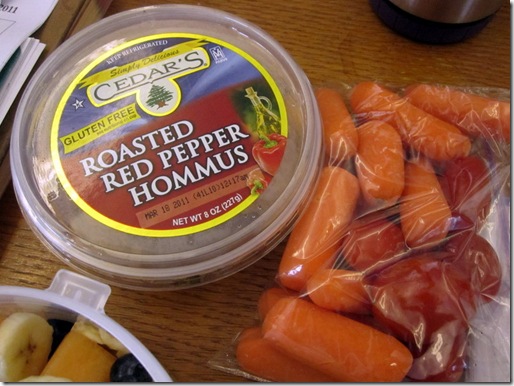 Today’s yogurt bowl included a vanilla flavored Chobani, mixed with some fresh cantaloupe, blueberries, and the other 1/2 of my banana from breakfast. 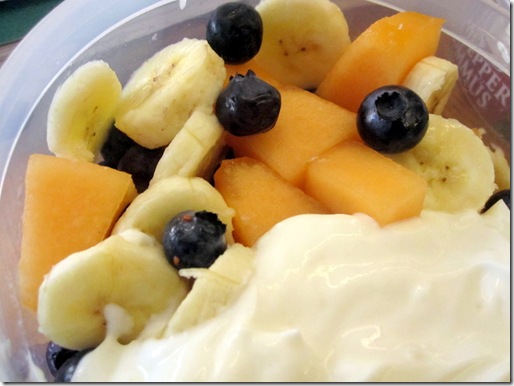 I was totally bummed when I realized I forgot my granola, but this little guy made up for what was lacking. 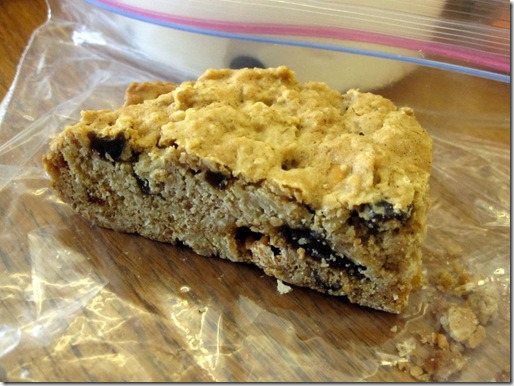 After work, I headed back to the grocery store to pick up a few items for tonight’s dinner. To be honest, I’d been pretty excited about these Twice-Baked Stuffed Sweet Potatoes all day after finding the recipe last night in my magazine.

So I started out by scrubbing up a few sweet potatoes 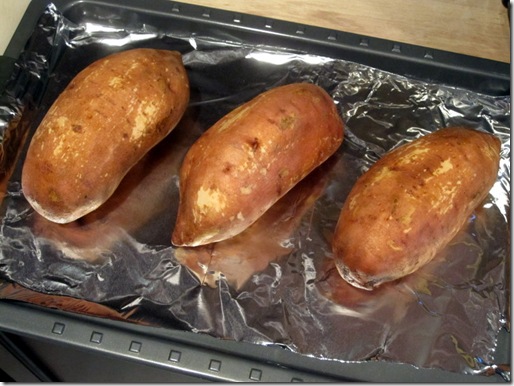 And of course, before popping them into the oven, I poked ‘em with a fork to let the big guys vent. 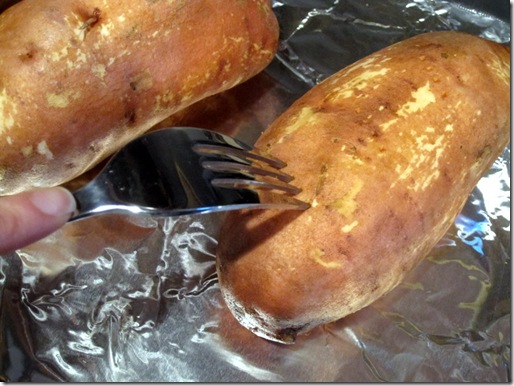 While they were cooking away, I got the rest of my ingredients prepped and ready to go. 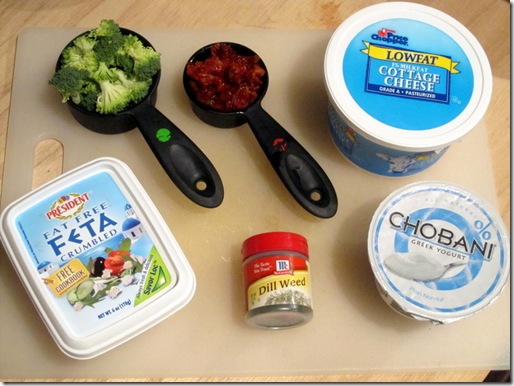 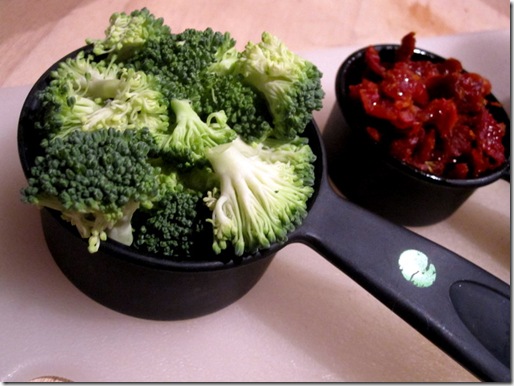 The prep for this recipe really couldn’t be much simpler. All you need to do is toss all of your ingredients in a bowl and mix! 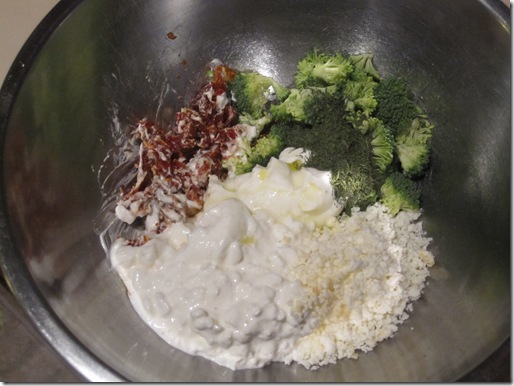 Once the potatoes are cooked, cut them in half and scoop the insides into the bowl with the rest of your ingredients. 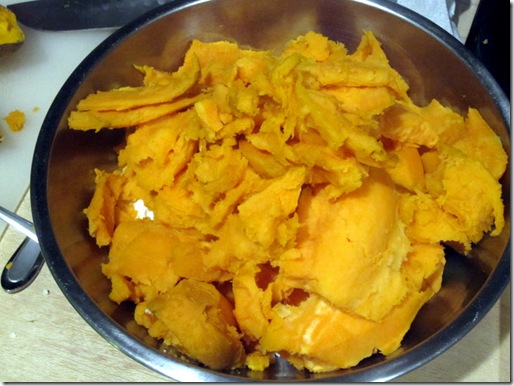 **One note of advice…

Make sure your potatoes are thoroughly cooked!!

I, apparently, was a little impatient with my taters, and took them out a little premature. If you couldn’t already tell by the way my “scooped out insides” looked above, you can totally tell by my annihilated skins here… 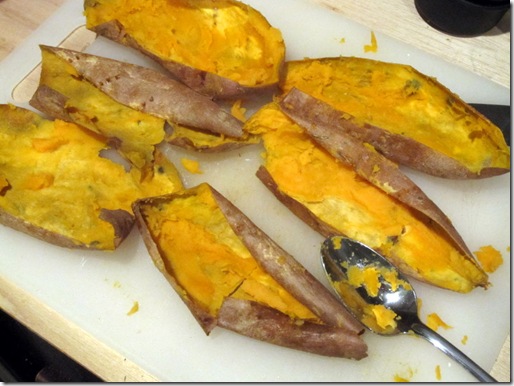 I decided I wasn’t going to let the look of my potato “boats” get the best of me, and went to work on the insides instead. I attempted to heat the mixture up in the microwave a little longer, but it really wasn’t enough.

So I filled my boats, popped ‘em back in the oven, and hoped for the best. 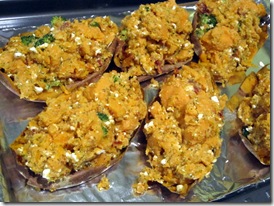 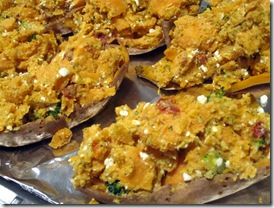 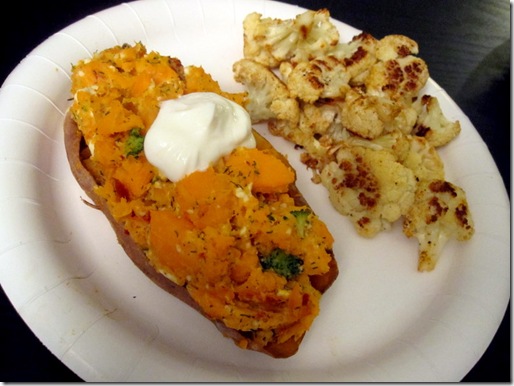 To go with the stuffed sweet potatoes, I roasted up some cauliflower – just a little salt, pepper, garlic powder, and paprika did the trick. 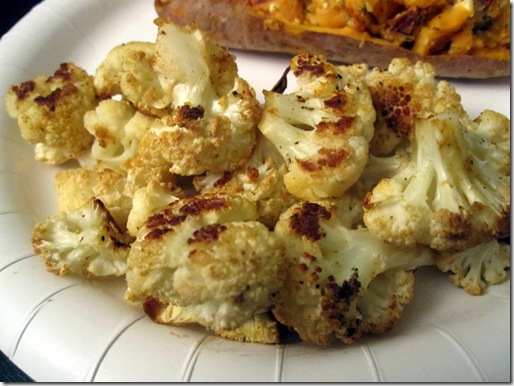 So the verdict on the potatoes?

The flavor of these things totally rocked, but they definitely needed to be cooked longer. My fault. 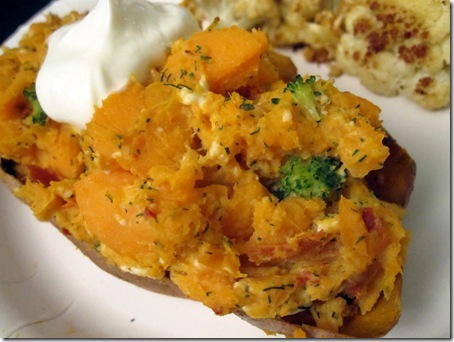 I loved how you could taste the subtle hints of each of the ingredients it had – a little broccoli here, a hint of dill there, a savory bite of feta every now and then. 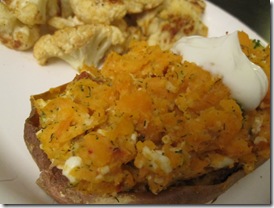 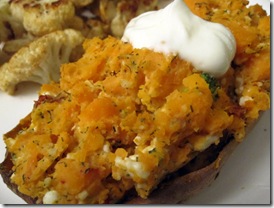 I definitely think I’ll make these again…I’ll just be a little more patient while they’re in the oven.

Preheat oven to 350 degrees. Bake the potatoes for one hour. Remove, let cool. Cut each in half, and scoop out the insides to create “boats.”

In a large bowl, mix the insides of the potatoes with the remaining ingredients and stir until combined. Season to taste with salt and pepper, and scoop mixture back into each potato half.

Return to oven and cook for approximately 10 minutes. Top with additional Greek yogurt if desired. ENJOY! 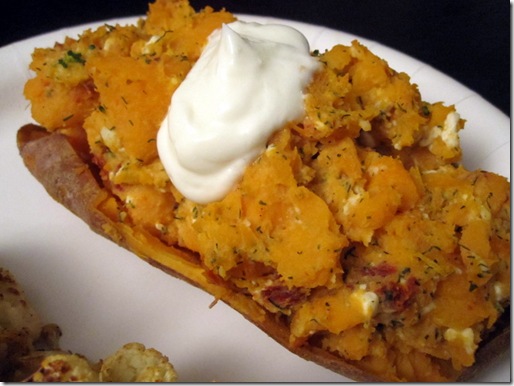 I’d definitely recommend this recipe to anyone, so if you happen to try it and cook them long enough, let me know how they turn out!

Question for the Evening?

What was your last cooking “fail?”