In case you missed the first one, you can check it out here, which covered the Accommodations & Food at the Valentin Imperial Maya.

Another quick thing I’ll mention before getting into this fun-filled recap is that the Valentin actually has a Facebook Page, which Jay and I stalked on a continuous basis for weeks leading up to our trip. They have a ton of information on there, and we actually found it quite helpful.

So now…let’s talk Pool, Entertainment, & Our Spontaneous Night all in one!

Basically, this is where we spent our days… 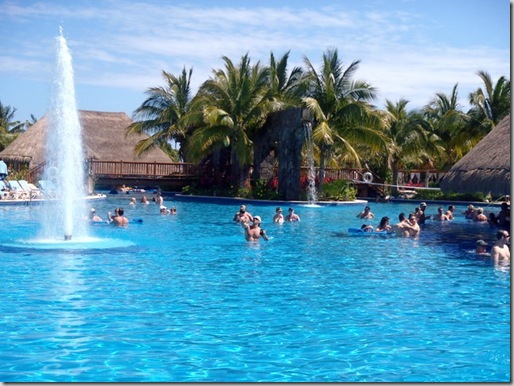 One of the things that we found out through the resort’s Facebook page is that you’re not allowed to save pool chairs with towels. There were no rules, however, about saving chairs with personal items. So every morning, someone from our group would get up early, head down to the pool area, and reserve five or six chairs in the water for our group of eight with magazines and/or books. Most of the chairs ended up getting taken by about 9:00-10:00am, so it’s important to get down there early. 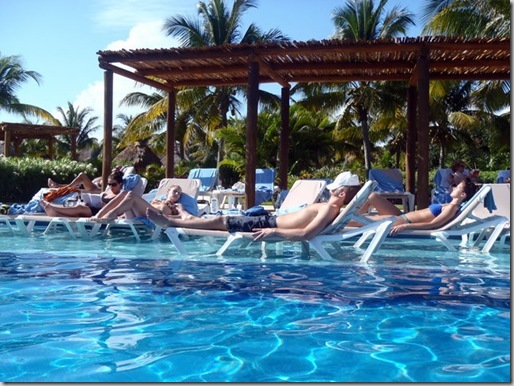 Especially if you want to do a little sun bathing.

The pool we spent all of our time at was the main resort pool, which included two swim up bars. 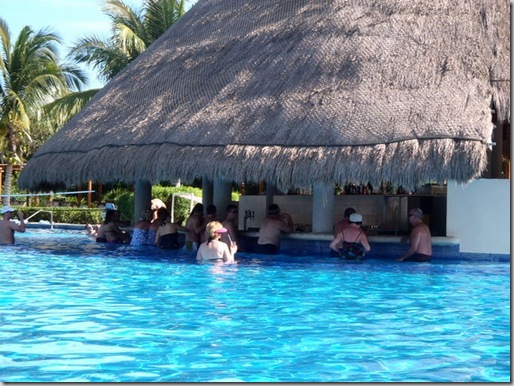 The swim up bars were fantastic, and included a wide variety of drinks to choose from. All of us took advantage of that swim up bar right from the minute it opened, at 10:00am. 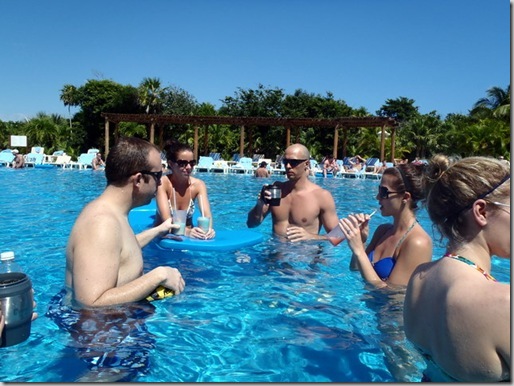 Another great thing about the main pool area was the entertainment. Every day, there were volleyball and water polo games that would take place, which the boys thoroughly enjoyed. In addition to those, they also had an entertainment crew who would get various games and contests going throughout the afternoon. 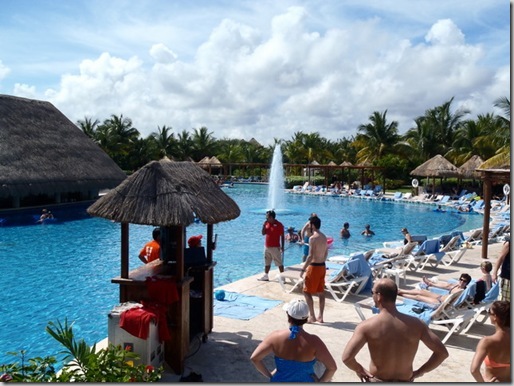 All of us ended up participating in at least one game throughout the week; our friend Brook won one game, and I came in a close second in another (even though I totally got robbed!). 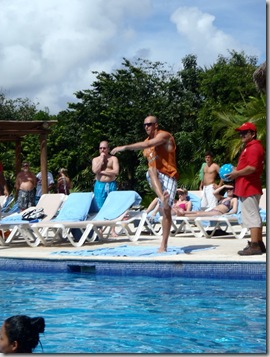 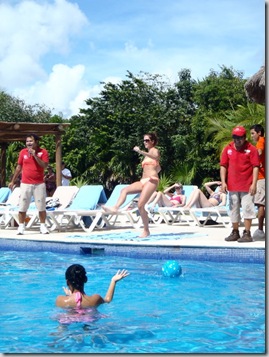 The entertainment staff was just that – highly entertaining, full of energy, and pretty darn hilarious, too!

They also had a “special dance,” which they would perform a few times a day, to the same song which got pretty catchy. We all began watching them from afar for the first couple of days, but in no time, we had learned the dance and got right out there and performed it with ‘em! 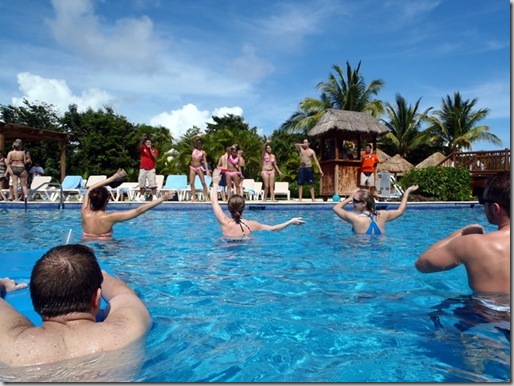 From what I could tell, we were the only other dancers out there, and I’m pretty sure they appreciated our slightly intoxicated enthusiasm. There was even one day where my friend Brian caught the scene on video, which you can watch here:

(You’ll see us dancing in the pool about  halfway through.)

Every night before meeting up for dinner, and after dinner, our group would meet in the main outdoor area of the resort called La Plaza. 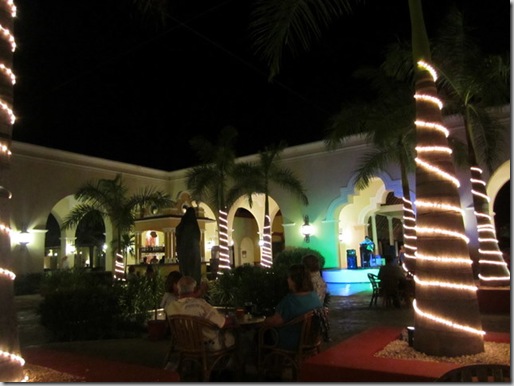 Every night, La Plaza is filled with various events. They have a band nightly with dancing, disco later in the evening (we’ll get to that in a second), two themed nights (Mexican and Caribbean) during the week with a buffet, and a sports bar where they have karaoke two nights a week.

When there isn’t a themed event, and before the disco starts, La Plaza is a pretty chill place to be able to just hang out, have a drink…or five… 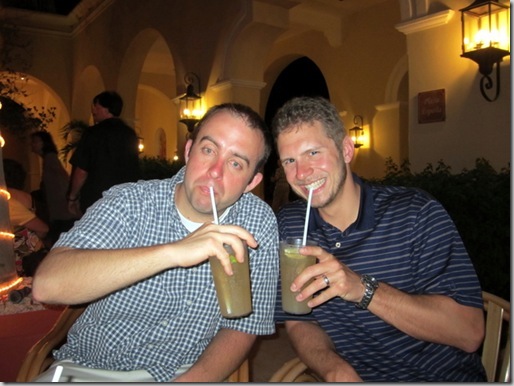 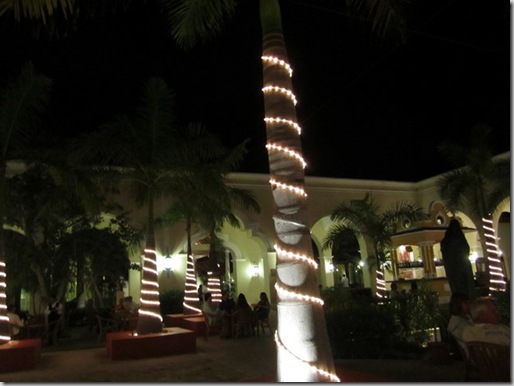 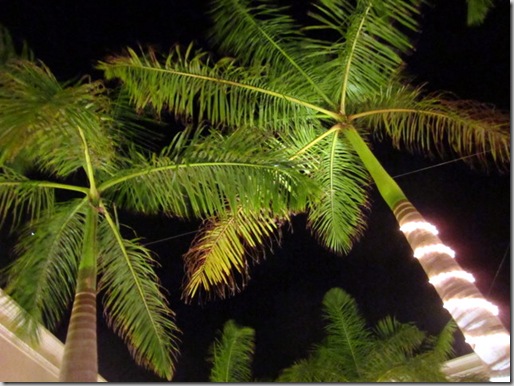 In addition to La Plaza, the Valentin also offers a different show every night of the week in their theater. 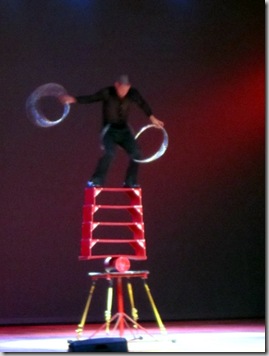 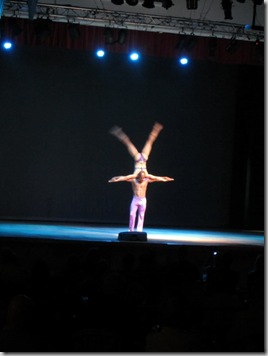 Of the nights that we were there, we saw the Grease show, and the Circus show, but I know that there was a Michael Jackson show, and that they also have movie showings as well (Transformers 3 was playing one evening).

Okay, so here it is! On our third evening at the resort, we headed to the hibachi restaurant for dinner. 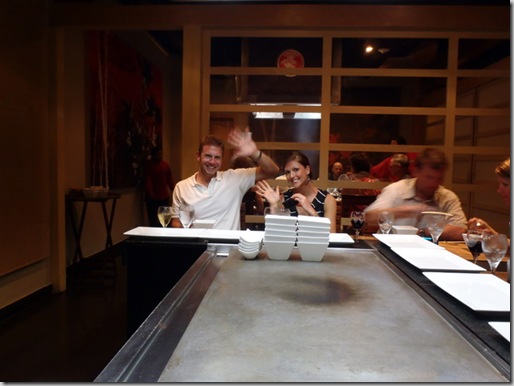 If you remember, we had quite a bit of food that evening, and most of us were feeling pretty full and lazy afterward. We had headed back out to La Plaza for another drink or  two after watching the Circus show, but it was clear that the night was coming to a close. Despite many of the boys still being ready to go, us girls had a serious case of the yawns.

The disco had already started for the night, which meant that the DJ was playing some pretty good dance music. At one point, a good song came on and Andrea and Sarah headed out to the dance floor. By the next song, Mal decided to join them, and within seconds, I headed up there too. Within minutes, one of my favorite songs came on, and somehow Andrea and I found ourselves up on the stage dancing…

(I just can’t help myself with that song, I’ll tell ya. It’s hard to see, but I promise we’re there. And yes, that’s Jay you hear yelling in the background.)

So by this point, the boys had come to join us on the dance floor, and shortly after that, a few of us felt a couple rain drops but didn’t think much of it…so we kept dancing. 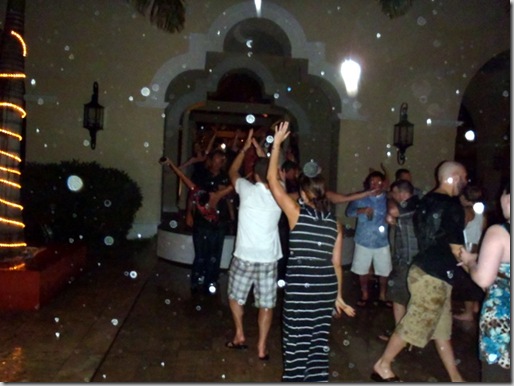 But within about five minutes, those little rain drops turned into a downright downpour. And then this happened… 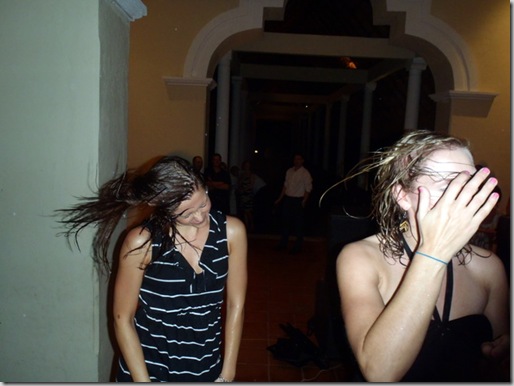 And this…yes folks, that is my husband. He’s not angry…he was just ridiculously excited to be wearing a white shirt at that moment. 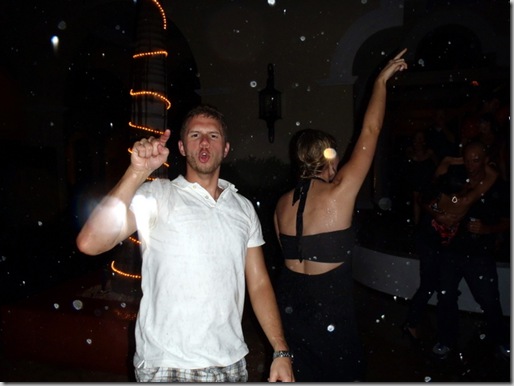 Here we were, eight grown adults, dancing our faces off in the pouring rain in Mexico. It felt like it could have been a scene straight out of a movie, and I don’t think ANY of us ever laughed so hard together. 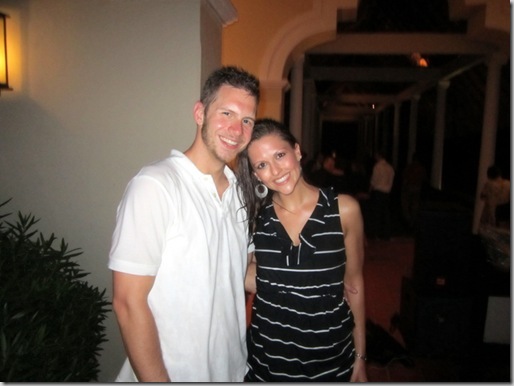 By the time the rain cleared (which only lasted for probably 20 minutes or so, and was the only rain we experienced all week) we were all absolutely soaked. 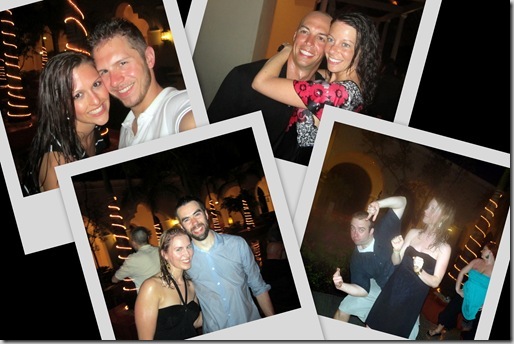 But we loved every last minute of it. 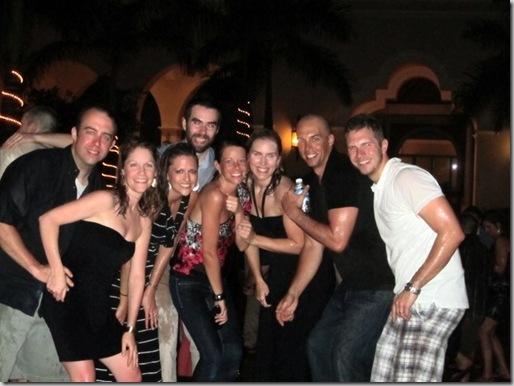 And that was, BY FAR, my favorite memory of Mexico.