Hello, hello! How’s everyone doing? How was the weekend?

We actually had a pretty great one over in our neck of the woods. Nothing too crazy, really…no big plans, no exciting events. Actually that’s semi not true…our friend Andrea gave birth to her second son last week and Jay and I went to visit her in the hospital on Saturday. Both mom and baby are doing great, and being able to get my hands on that cutie newborn just sent my itch to see our little guy through the roof. Eeeek!

But backtracking a bit…on Friday night, Jay and I took part in one of my favorite Friday night lineups: takeout and a Redbox movie. 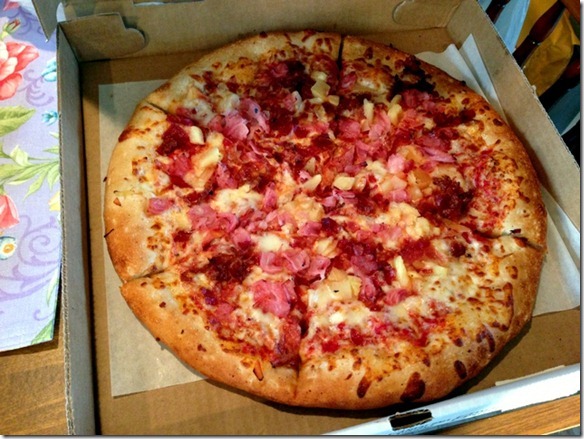 We ended up ordering pizza from a new place that opened up near us, which we learned about after getting their menu in the mail. The menu itself was filled with some unbelievable and crazy sounding pizzas (hot dogs and mac & cheese?!?) and we decided to go a slightly different route from our norm and ordered a Hawaiian pizza.

The flavor of the toppings was good, but the pizza itself was kind of a drag. The crust was super soggy and definitely tasted pre-made. Ahh well…you win some, you lose some, right?

Luckily, the rest of the weekend’s dinners were delicious, and surprisingly enough, I actually cooked both days. I know…crazy. 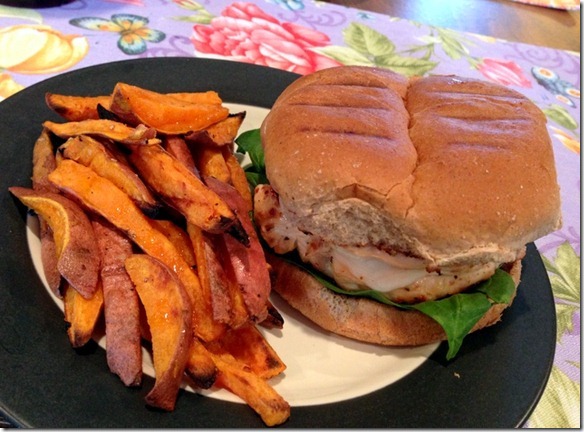 On Saturday, we had Chicken Florentine sandwiches with these sweet potato fries (minus the dip). The fries were good, but the chicken sandwiches were awwwwwesome. I decided to try to replicate one of my favorite sandwiches from Lanie’s Cafe and I’d say I did a pretty decent (and probably way healthier) job of it. 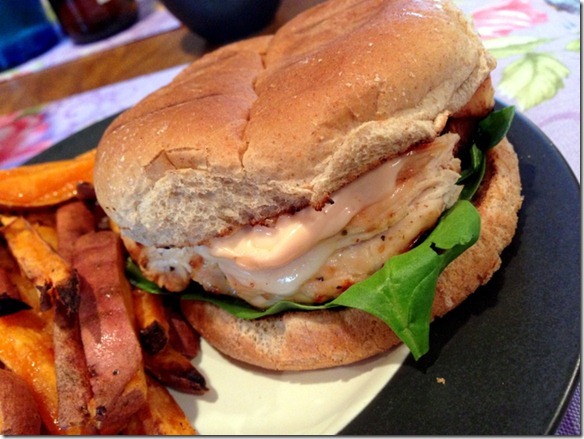 To make them, we simply marinated some chicken in Italian dressing, grilled them up, then topped them with provolone cheese, fresh spinach, and homemade Russian dressing. Sooo delicious.

Aaaand because we ate in on a Saturday, and because it was such a beautiful day already, I saw that as a perfect excuse to make our first trip of the season to The Snowman. 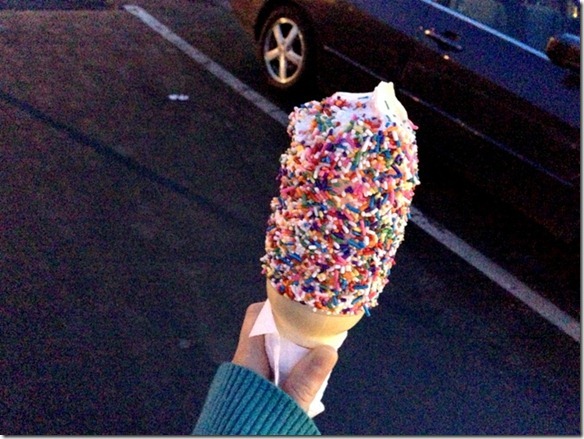 I love, love, LOVE me The Snowman and get so excited when it opens back up every season. It’s one of my favorite signs of spring/summer for sure. Orange and vanilla twist with rainbow sprinkles the size of my face? Yes, PLEASE.

I think Baby Tooth enjoyed the goods just as much as his mama, judging by his acrobatics that followed. ;)

Our Sunday morning started off a bit on the lazy side. 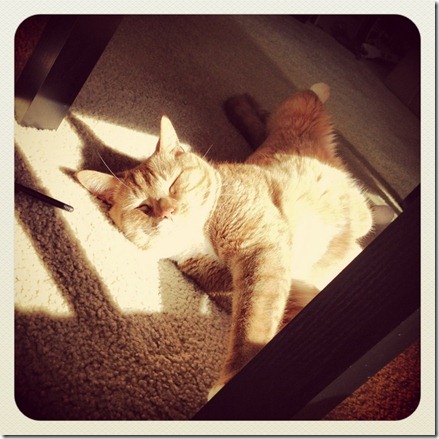 Wherever there’s sunshine, there will be Cody.

We all spent a little bit of time lounging in the living room and thoroughly enjoyed it, since many of our weekend mornings haven’t allowed us to do that lately. The rest of the day was crazy-productive both in and out of the house. We got a bunch of yardwork done, planted a couple of new plants/bushes, took down our Christmas lights (yes, I know it’s almost May. Don’t worry, we weren’t turning them on!), did laundry…you know, all the usuals.

As we worked though, we had dinner waiting for us in the crockpot. 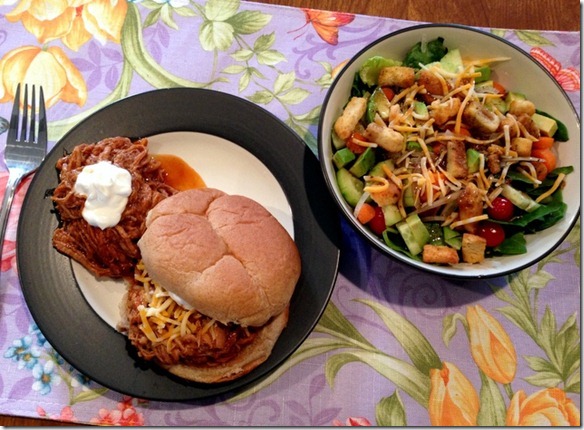 To work on the veggie intake for the weekend, I made us some big side salads with lots of veggies. 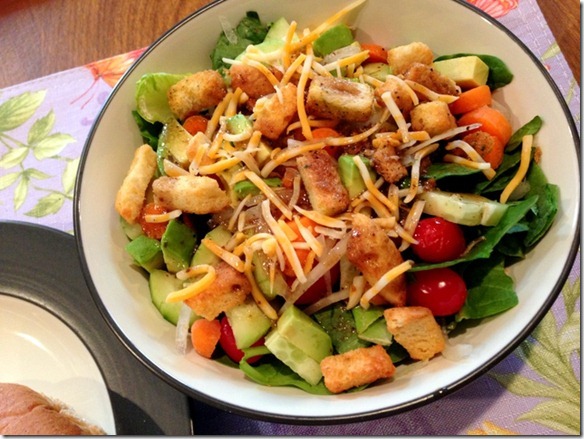 But the real good stuff was the BBQ Pulled Pork. I used my favorite BBQ Pulled Chicken recipe, but subbed in a little less than 3lbs of nice, lean pork tenderloin for the chicken. I tend to make this recipe quite often with chicken instead of pork, usually because I feel like I can get the chicken cheaper, but pork was a good price this week so I went for it.

I just loooooove me some pulled pork. 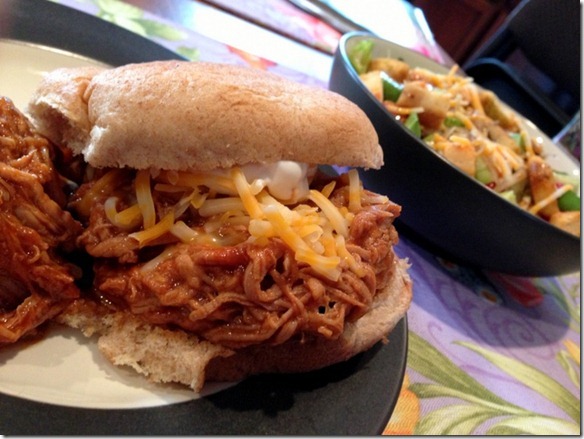 My eyes were a little bigger than my belly when I portioned out my plate, so I wound up eating the sandwich but gave the extra pile of pulled pork to Jay. I also really love how MUCH this recipe makes because we now not only have some for later in the week, but we also have a good-sized portion that got put into the freezer for another time. So easy peasy.

Overall, it was a great weekend with lots of good food, indeed. Today, it’s back to the grind but later this afternoon I have my 28-week prenatal appointment…which also means that today is glucose test day. Oooof. Honestly, I’m not at all worried about whatever drink I have to drink; if we’re being honest, I have no problem having to drink a sweet, fruity, sugary beverage. I just tend to get a little paranoid when it comes to getting the results back (which I know doesn’t happen for at least a week). But hey, I guess we’ll just have to wait and see how that goes. :)

Happy Monday, everyone! Hope your week is off to a fabulous start!