Happy WIAW! To be honest with you, I’m shocked we’ve already made it to Wednesday…for whatever reason, I felt like this week was going to take for-ev-er, but it’s actually going by surprisingly fast. Win!

Today’s WIAW is more like what I ate, Monday. Not all of my food has been exciting and/or interesting these days, but Monday wound up having some good eats…so let’s get to it!

You guys…eating heated up scrambled eggs is SO much better than I could have thought. 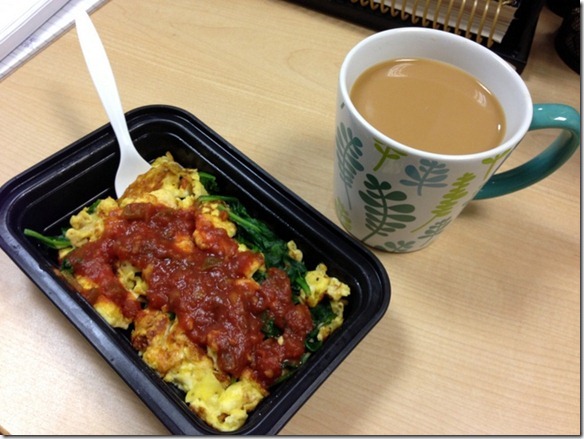 I also got a new work coffee mug – you liiiiike? Tar-jay, baby!

On Monday morning before work, I made a failed attempt at an omelet 2 scrambled eggs with spinach and provolone cheese, and topped them with some mango salsa. I just reheated them in the microwave at work and, voila! Like they were just cooked. So, so good. 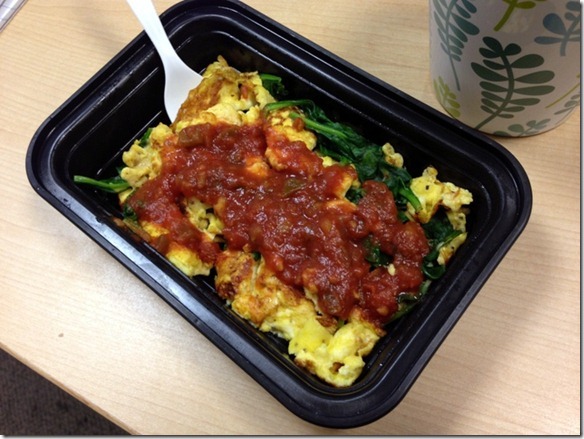 As delicious as my eggs were, I was hungry again a couple hours later (no surprise), so I snacked on a banana with peanut butter. 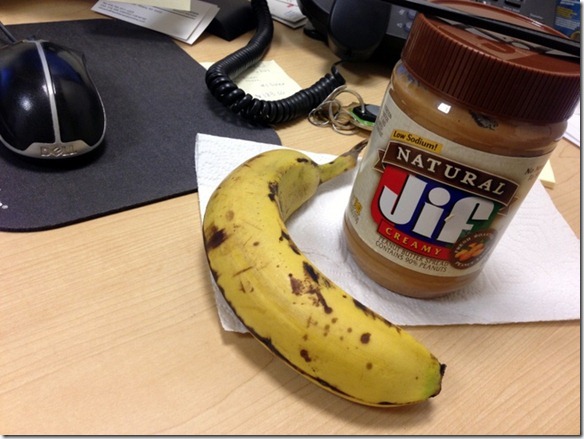 Can’t beat that combo. Ever.

I actually made this lunch on Sunday afternoon, before heading out for the Super Bowl, since I knew I’d be too pooped to do it either at midnight or the next morning. 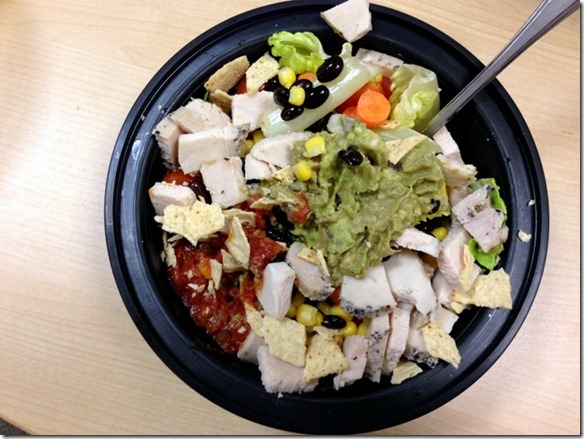 I used some romaine as a base for this amazingly delicious taco salad, which included grape tomatoes, baby carrots, corn, black beans, TJ’s roast turkey, salsa, and homemade guacamole. I also wound up breaking up some TJ’s tortilla chips and added them on top for some extra crunch. 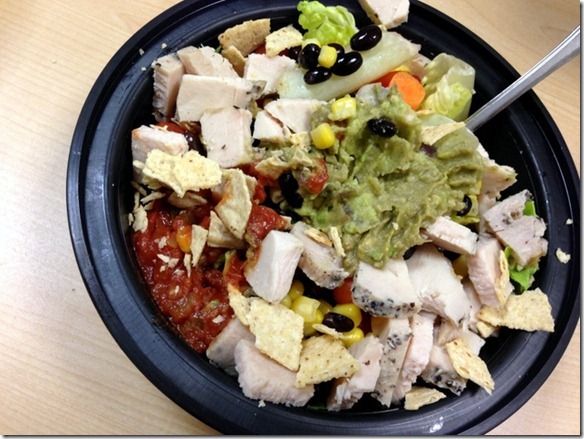 Why do I not make taco salads more often? Seriously.

Hunger struck again, so I grabbed the apple cinnamon Chobani that was waiting for me in the fridge. Always a good choice. 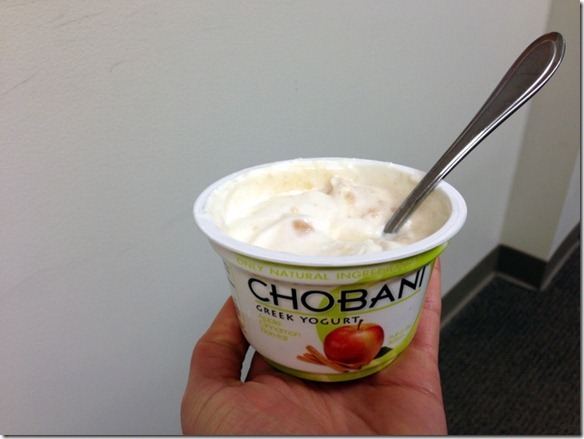 Once I got home from work on Monday, I got my workout done and then ended up snacking on some leftover taco dip from Sunday while I cooked dinner.

This dinner, to be exact. 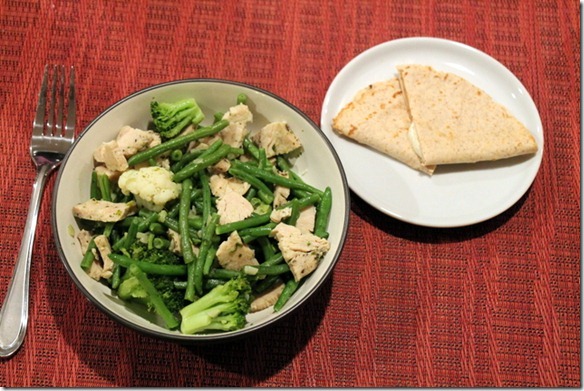 And actually, it couldn’t have gotten much easier. In a skillet, I simply cooked up the rest of a bag of TJ’s frozen veggies (which come in a light garlic butter sauce…omg) with the couple remaining slices of roast turkey I had. 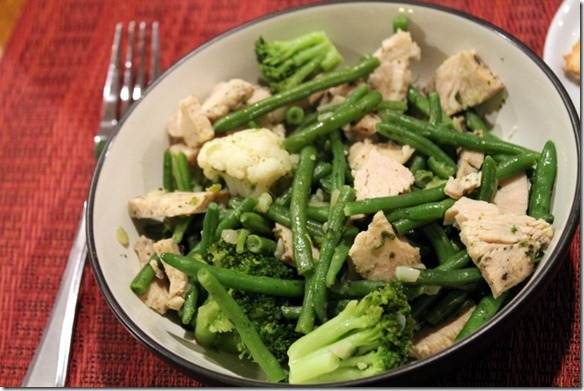 My ranch dressing craving struck again, so that bowl wound up getting a little drizzle after the photo.

To go with my veggie and turkey bowl, I also added a little mozzarella cheese to a mini whole wheat LaTortilla Factory wrap and threw it under the broiler for a few minutes to get everything melted. 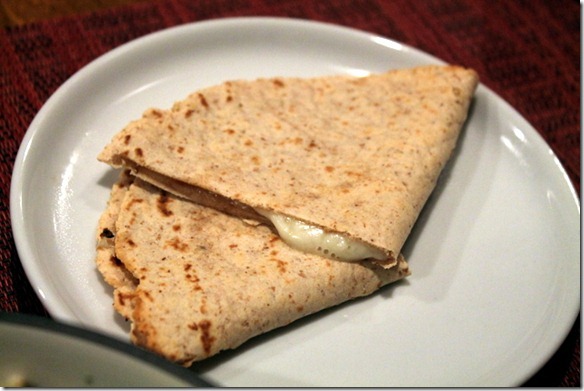 So simple. So awesome.

Shortly before heading to bed, my sweet tooth struck (no surprise there!) so I dug in to one of my leftover Chex Scotcharoos. 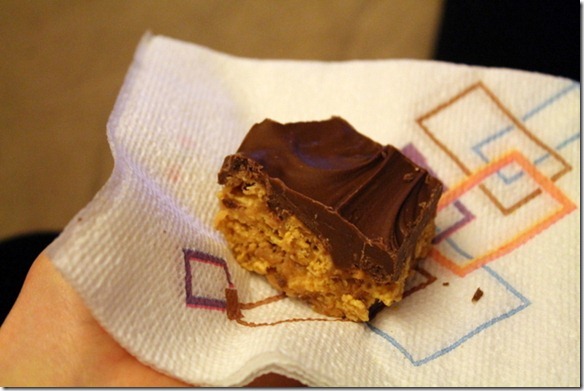 Alright you guys…these things are GOOD. And oddly enough, have any of you ever tried the Caramel Macchiato coffee from The Fresh Market (which has LONG been a favorite of mine, btw)? For whatever reason, these things smell JUST like that coffee…no joke. And Jay even agrees with me, so I swear my sniffer isn’t just going crazy.

A scrumptious day of eats AND I actually got a good amount of veggies thrown in there, which is always a plus…especially since I’m not craving them so much these days!

On an ideal WIAW, what would be one meal/snack that would most definitely make an appearance for you?

« Your Favorite Foundation?
Couldn’t Say No »