So up until yesterday, I’d say that I went a good week or so where I felt like my hunger was actually somewhat back to what it used to be pre-pregnancy. Yesterday though? All I wanted to do was eat all day long…I was huuuuungry!

I guess it worked out well though, since I actually have some more stuff to share with you all for another fun edition of What I Ate Wednesday Tuesday. Thanks to Jenn, as always, for hosting! Now, let’s get to it…

Yesterday involved a new-to-me kind of breakfast sandwich, involving egg, cheese, and turkey bacon (and some rather messy red raspberry jam that I added on my own). So what’s so different about it? 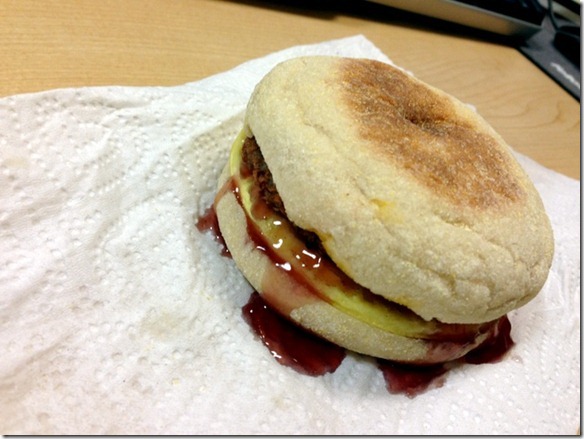 Well, it wasn’t homemade…it was frozen.

I couple of weeks ago, I received some coupons in the mail (disclaimer) to try out a few of the new Weight Watchers Smart Ones frozen meals. Now, as you guys probably know, I’m usually not for frozen meals like this…and this still remains the same. 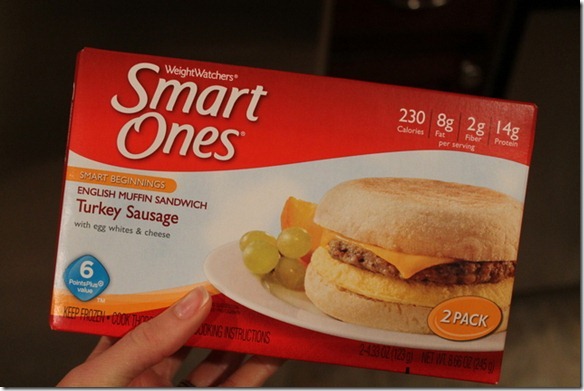 Given the choice, I would most definitely prefer to make my own – not only because it tastes better, but also because it’s better nutritionally. But I was still interested in trying them out, so I gave them a shot. I will say that it did have a decent taste…for being a frozen meal. It almost reminded me of something you’d get from McDonalds.

You guys…I bought it again. 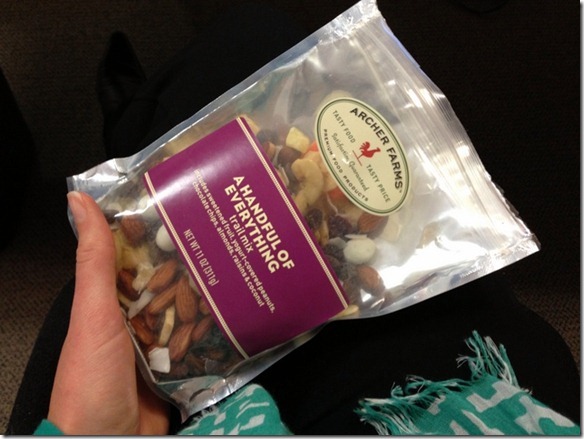 My last trip to Target brought me into the snack aisle and I suddenly found myself checking out with this ever-so-addicting trail mix. I stuck with a handful and then put it back, so perhaps I’m getting better with that willpower?

I also snacked on a pear Chobani. 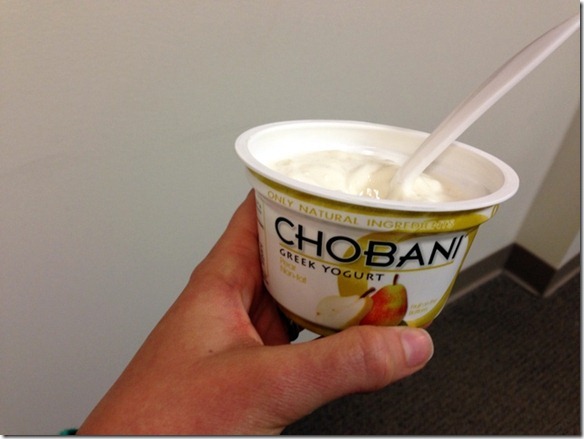 Definitely not pretty to look at…sorry about that one, my friends. But I can assure that it tasted just as delicious as it did on Sunday night. 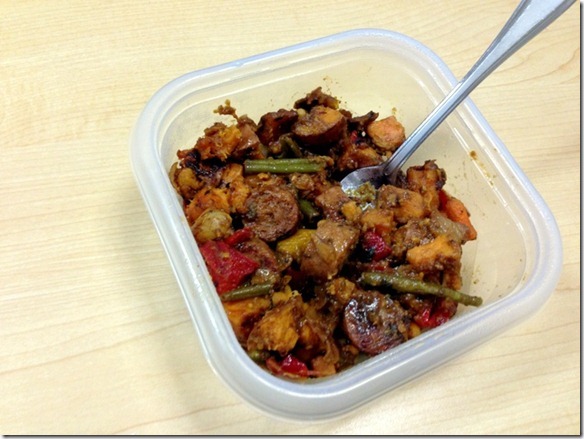 To follow up with something sweet, I snacked on a couple of Banana Oatmeal Chocolate Chip Cookies. 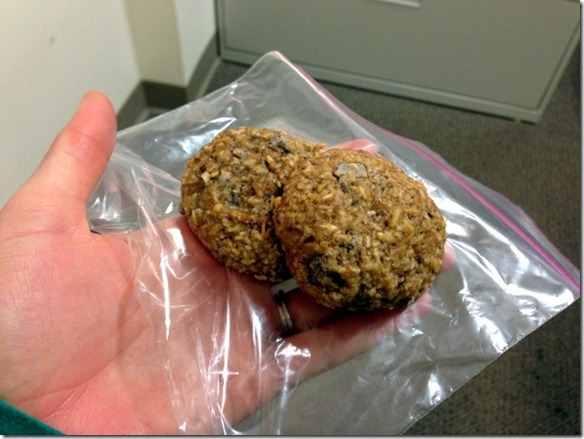 Not a new batch…just had some stashed in the freezer that I decided to take out. LOVE when I rediscover treats in there!

I was super hungry by about 3:30 in the afternoon, making me rather thankful for the Wasa crackers (the light ‘n’ crisp kind) and peanut butter I have stashed in my desk. 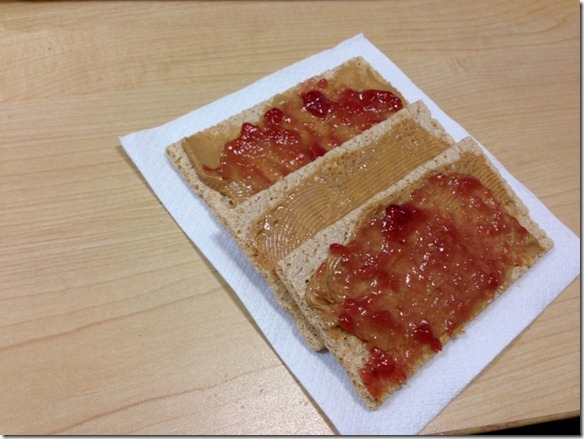 The raspberry jam was an added bonus, since I had brought a little bit in to have on my breakfast sandwich. This was one delicious afternoon snack.

Well, we stuck with our plans to make the California Quesadillas…and they were a HIT! 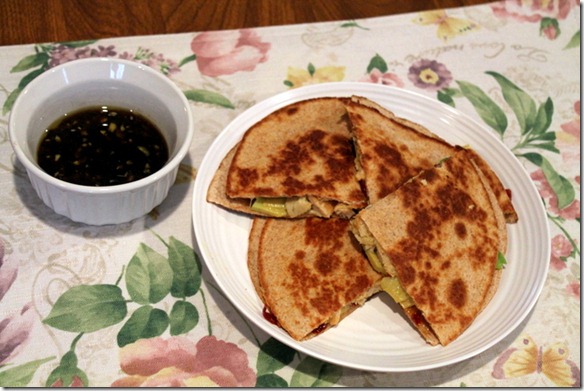 I made my quesadilla with a couple of whole wheat tortillas, cheese, chicken, sundried tomatoes, artichoke hearts, and avocado. Those flavors alone were delicious, but when we dipped them into the honey balsamic dipping sauce? Oh mannnn…amazing. 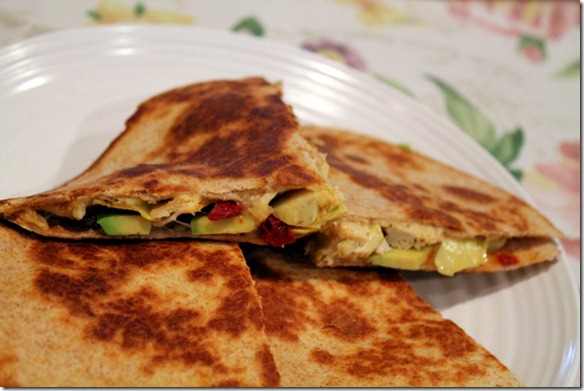 And lucky for us, the recipe left us with a bunch of leftover dipping sauce, so I have some packed up today to put on my lunch salad (<—that’s right, I made myself a salad!). 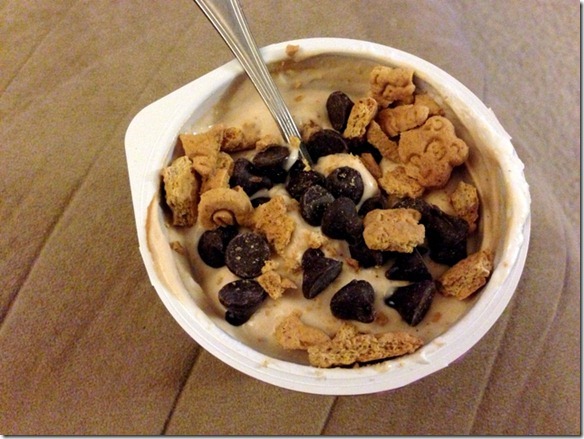 I felt like if I hadn’t been so busy at work, I most definitely would have wound up eating more during the day yesterday, just because I had an appetite like no other. I guess it’s a good thing I was constantly getting up and down throughout the day to keep moving!

Overall, not a very green WIAW, but it was a good one for meeee. I’ll get my greens today.

How do you feel about frozen meals? Like them? Hate them? Impartial? Good in a pinch?

« A Lot of Repeats
Win Some Reebok Sneakers! {Giveaway CLOSED} »