Mornin’ friends! How was the weekend? Awesome, I hope?

Well since I last chatted with you all Friday morning, I have a few things to catch you all up to speed on, starting with Friday afternoon. I’ll tell ya…I have some amazing co-workers.

I was completely thrown off guard with a surprise baby shower at work on Friday! Complete with adorable decorations, the most amazing cupcakes I think I’ve ever had (no joke) and some incredibly generous gifts. It was such a sweet, unexpected gesture and was so much fun. I think the next thing on the agenda at work is to start up a pool for when I’m going to deliver. Hey, if someone can make money off of when I deliver Baby Tooth, more power to ’em! ;)

Friday night, Jay and I did make it out for our date night (despite the fact that I may or may not have been falling asleep on the couch a bit beforehand). We didn’t want anything fancy and really just wanted to be able to sit outside, so we decided to try out a new-to-us spot called Uncle Marty’s Adirondack Grill.

After a quick wait at the bar (and me being offered a drink because the bump was in hiding, ha!) we got our table out on the covered patio…and almost immediately ordered the pulled pork nachos. 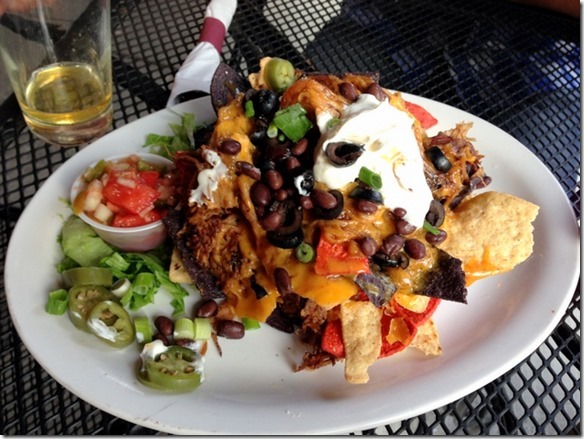 I had already been told great things about these nachos and ohmygod they were incredible. Jay and I said we would go back just for the nachos and drinks. They were SO good.

Even though we basically housed the nachos, we still had ordered dinners – a southwest chicken wrap for me. 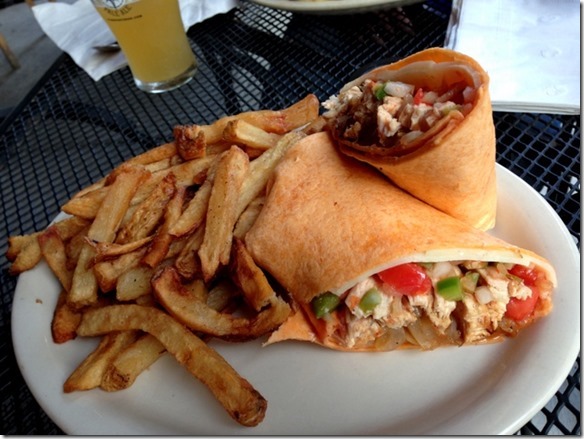 It was good, but for whatever reason, that thing had my mouth on FIRE (the homemade salsa). This is actually amusing because I ate my other leftover half and fries for dinner on Saturday and it wasn’t nearly as spicy as it tasted on Friday. Who knows…

On Saturday, I kind of fell off the radar. I spent the morning out running a few errands (grocery shopping and buying maternity bras – WOO!) but didn’t feel too hot for the rest of the day (I think the heat had something to do with it). Jay was out golfing in a tournament for a majority of the day, so once he got home, we really just laid low and didn’t do a whole lot. He also put the other AC unit in, which seemed to help my nausea and overall BLAH feeling, which was good.

Sunday, I woke up feeling muuuuch better. We enjoyed a simple, lazy breakfast and then I got to work in the kitchen and got not one, but TWO freezer meals complete.

On the left is Roasted Veggie Mac & Cheese and on the right is Chicken and Black Bean Enchiladas. I’m thinking both of these are going to be mighty tasty once Baby Tooth is here, and I’m so glad that I’ve been able to get a few of these together so far. We’ll see how many more I can bust out in the next couple of weeks. ;)

Sunday afternoon was spent working outside, mostly with getting our pool open…FINALLY. The good news is that we got the pool open, it wasn’t super green, and we had no dead animals floating around (minus some nasty worms).

The bad news is that the motor to our pool pump is shot, so we can’t technically get the pool running yet. Luckily Jay found the motor on Amazon for a somewhat cheaper price (sheesh!) so hopefully we’ll have things up and running by the end of the week.

After spending the majority of our afternoon working up a sweat outside, we came in, showered up, and got to work on dinner. Yep…I got my pizza on the grill! And check out how odd and random that thing is…

They didn’t have the dough balls that I typically buy at the store, so I wound up buying a can of the Pillsbury whole grain pizza dough. It tasted good, so that was no problem, but it gave us a little bit of trouble with the initial transfer to the grill grates. No worries though…that bad boy still tasted deeeee-lish.

We went bbq chicken style, topped with bbq sauce, mozz, chicken, and grilled onions. I had two pieces for dinner along with an ear of corn on the cob which, if you haven’t already noticed, has been a huge favorite of ours lately. YUM. 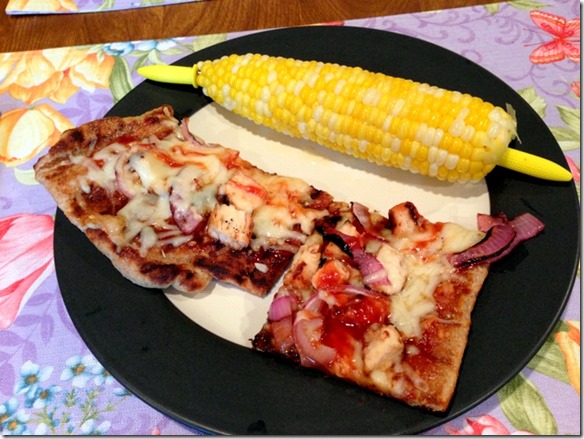 And that, my friends, pretty much sums up my weekend! It went by way too fast, as always, but it was a good one at that.

Now it’s back to the grind today…hope everyone’s week is already off to a great start!

Any awesome highlights from your weekend? Do anything fun or exciting?