Let me tell ya…I have some fun and creative friends! 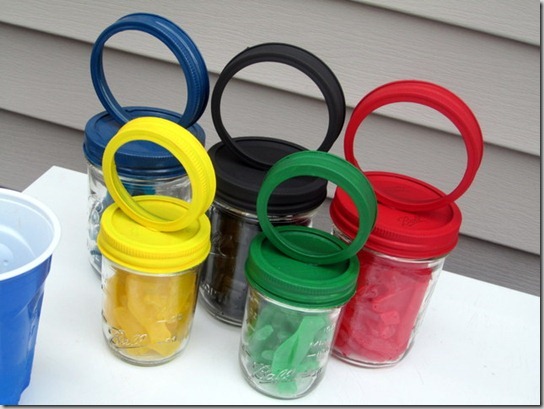 Early yesterday evening, Jay and I headed over to our friends Brook & Andrea’s house for a fun day of games, food, drinks, and celebrating (in addition to the summer games, we were also celebrating Brook’s recent birthday). 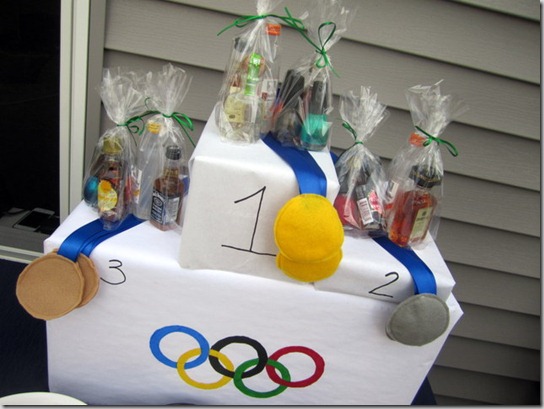 They even had prizes. So cute!!

By the time we arrived, there were already some snacks and beverages out, which I enjoyed a little bit of. 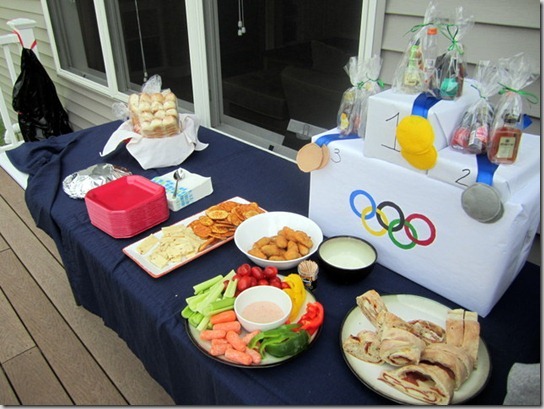 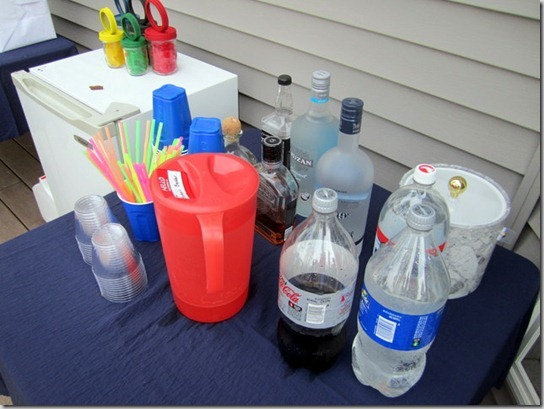 That orange pitcher there is filled with Andrea’s famous “Summer Beer.” I can’t remember exactly what it is, but I think there’s at least beer, some sort of liquor, and maybe Sprite? Whatever it is…it’s always good. 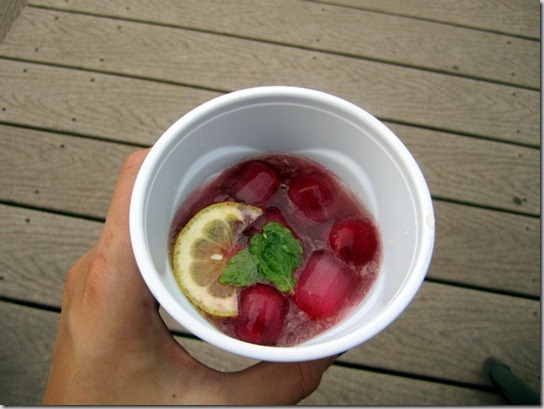 Made with raspberry filled ice cubes, which melted into lots of yummy raspberries. Such a good idea!

I was also really excited to finally be able to meet Brook and Andrea’s newest addition to the family. Meet Sydney! 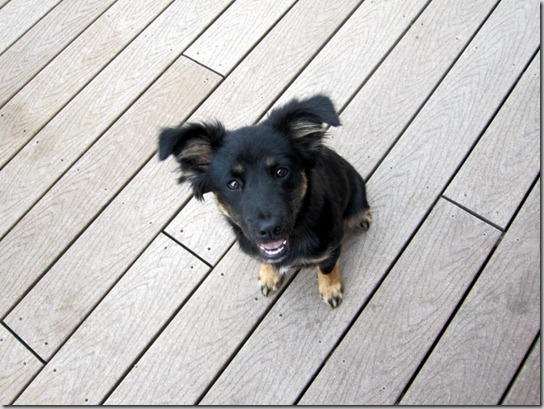 It’s she a cutie?!? She was so good all day, and basically roamed and ran around the yard as we all played. She almost made me want my own puppy for about .5 seconds, and then I came to my senses.

Once a few more people arrived, we all got geared up to begin our Summer Yard Olympics. Now when I said I had some fun and creative friends, I really wasn’t kidding! 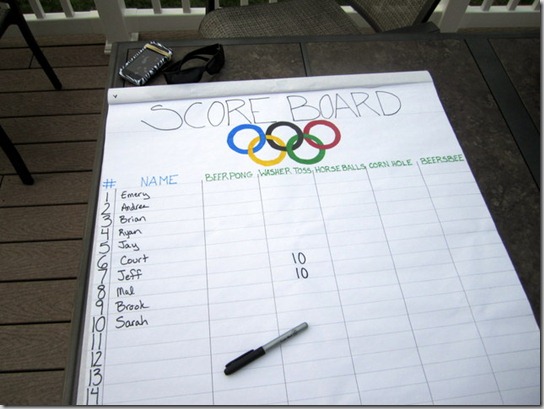 We had five different games to play: beer pong, washer toss, horse balls, corn hole, and beersbee, and each one was set up with an instruction board on how to play. 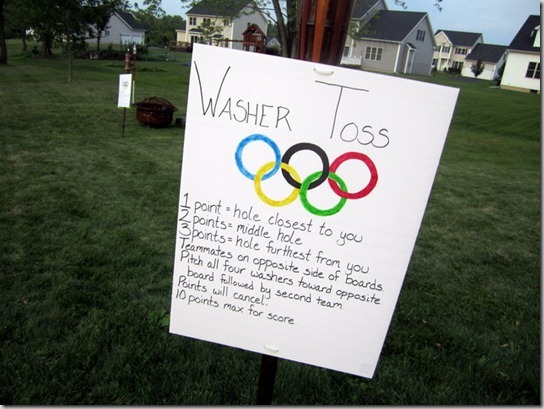 We even had our own “Olympic torches” throughout the playing field. 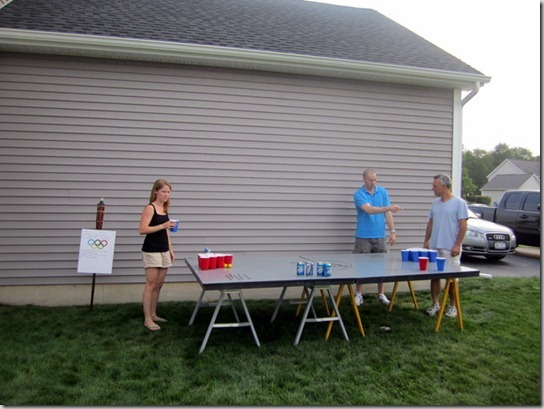 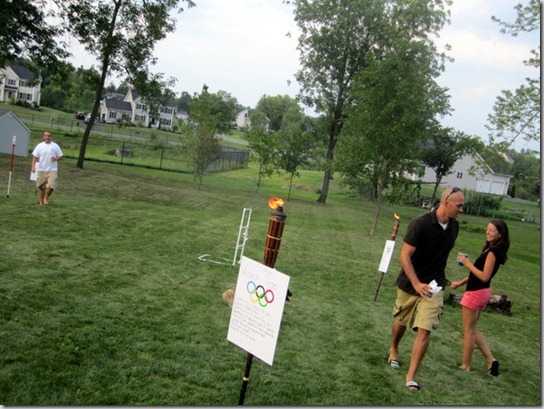 My first game I had to play was washer toss, and I can say with 100% certainty that I would be okay if I never, ever play that game again. Ughh, it was so frustrating! Luckily, I had Mal over with me to keep me sane. 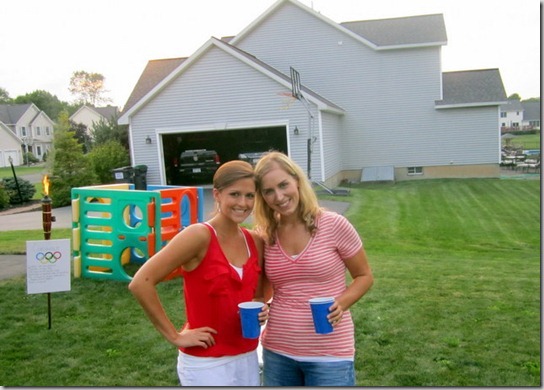 My second game was horse balls, which has long been a favorite of mine. Me and my partner won that one – WOOP! 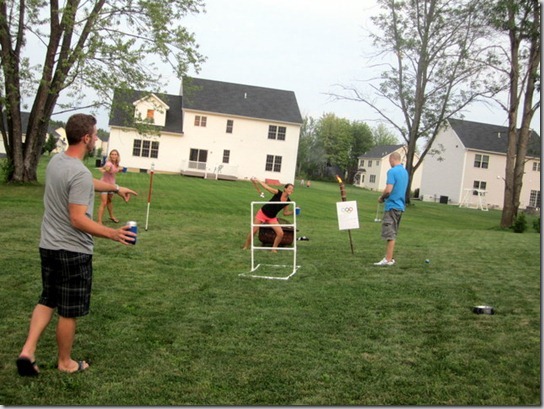 Another game that wasn’t my favorite? Beersbee. Basically, you have to always be holding a beer/beverage, and have to throw the frisbee to the other person. If the other person drops it, you get a point. If you knock off the water bottle from the pole, you get 3 points. And if you put down your drink at any time, your opponent gets 3 points. 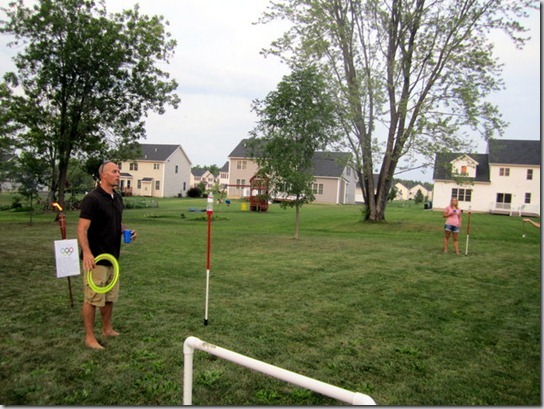 I’m thinking the main reason this game wasn’t my favorite was because it was pitch black when I played. Not exactly easy for frisbee catching! Yet somehow, I still won. Another WOOP!

As the evening went on, we all continued playing our games. 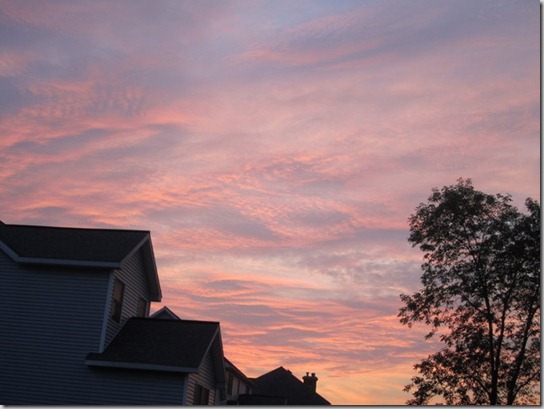 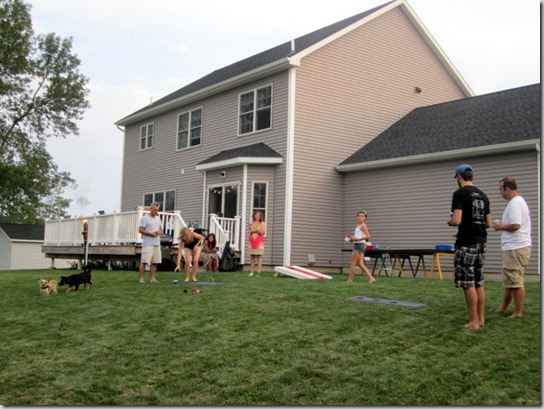 And they still continued well after dark. A little extra challenge, if you will. 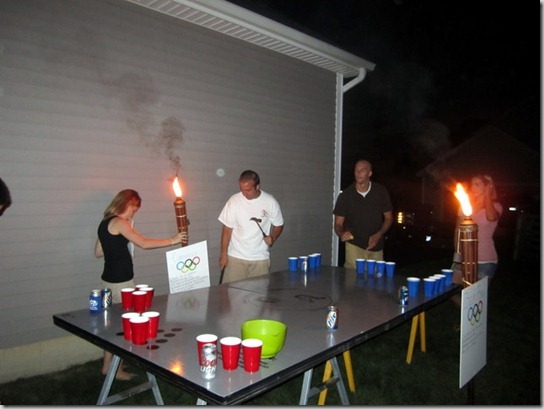 Eventually, everyone finished up and the scoreboard was filled in. Check out #6 there! Four 10’s and a stinkin’ 4 thanks to that darn washer toss. Not too shabby! 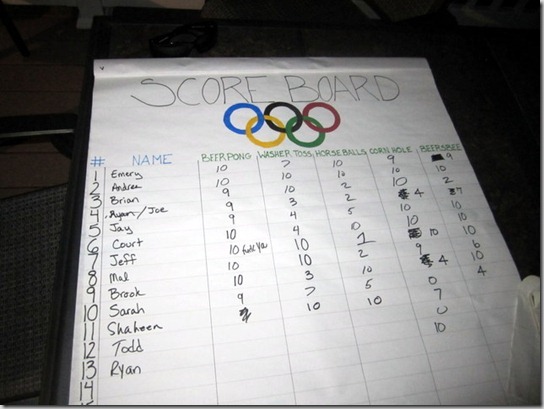 As Andrea tallied up the scores, everyone went ahead and had some dinner. I didn’t realize it was almost 9pm by this point, and I was hungry. I made a plate with two mini hot dogs, homemade potato salad, and some french fries. 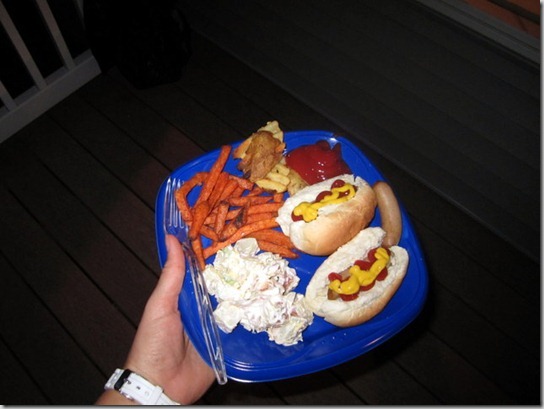 As we were eating, the medal ceremony took place – yes we even had homemade medals!

Here’s our version of the Olympic podium of winners… 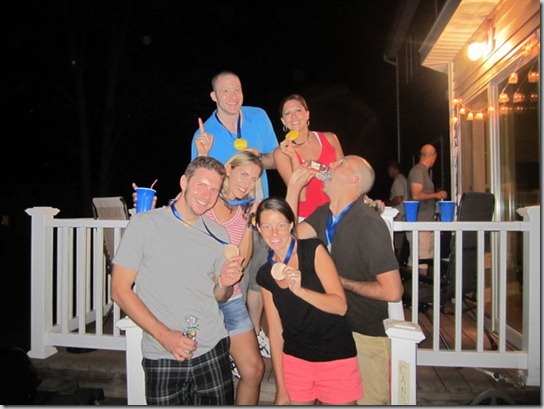 Check out who got the gold, baby! Even though it was really Andrea who scored perfect 10’s across the board, she gave up her winning status, putting me with the gold, Mal with the silver, and Sarah with the bronze. 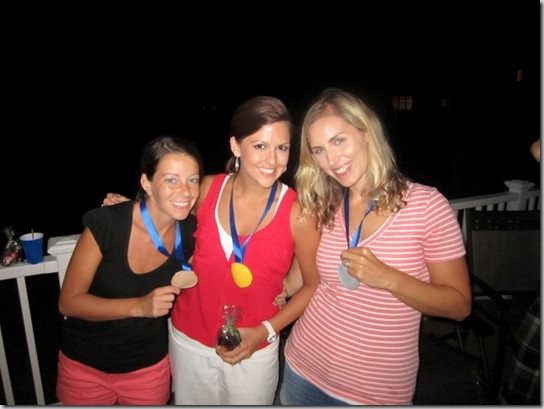 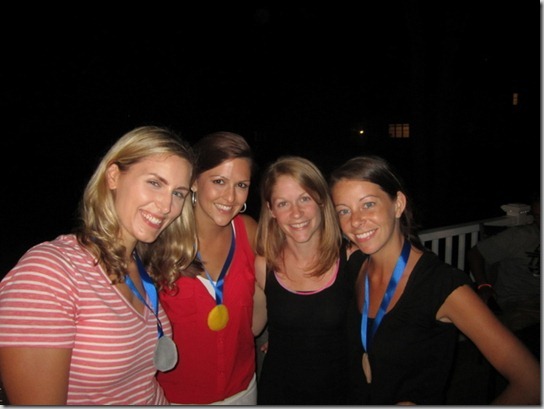 I had to give Jay a little bit of a hard time about our differences in medals.

Don’t worry babe – bronze is still something to be proud of! 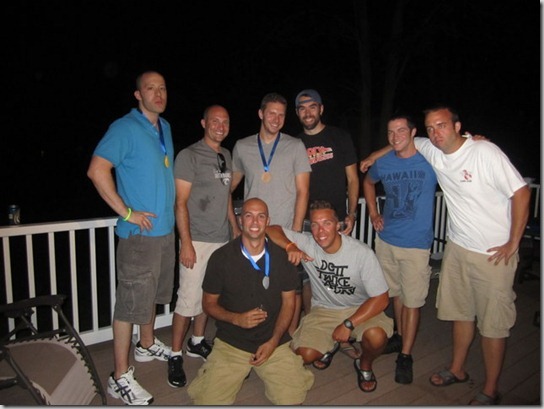 Toward the end of the evening, I ended up sitting near the desserts and, well, let’s just say that that did not go well. Rice krispy treats, some of the most incredible chocolate chip cookies I’ve ever had (in the blue bowl – Monica, I think these would have ended your hunt for the best chocolate chip), more cookie bars, and my contribution – Triple Chip Blondies. 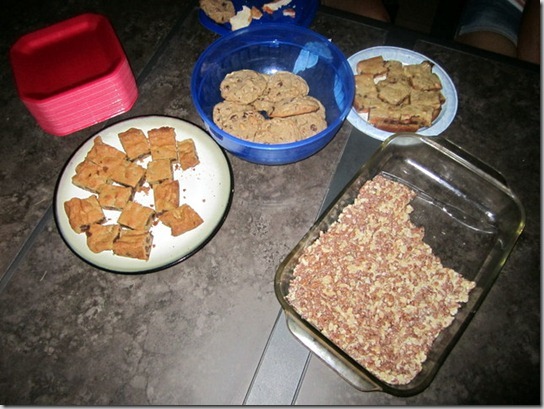 I don’t even know how many I had. You know how it goes – a small one here, start talking to a friend. A small one there, then you need another. Ooof.

Luckily, I didn’t feel like too much of a slug, since all of us girls went inside later in the evening and started bustin’ a move to our favorite game. Eventually, it was time to head back home, but man, did we have a good time!