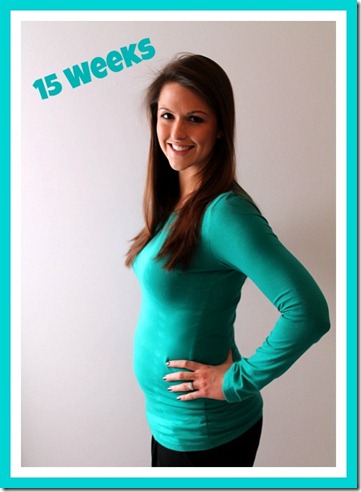 It’s hard to believe that just five weeks ago, I was looking like this… 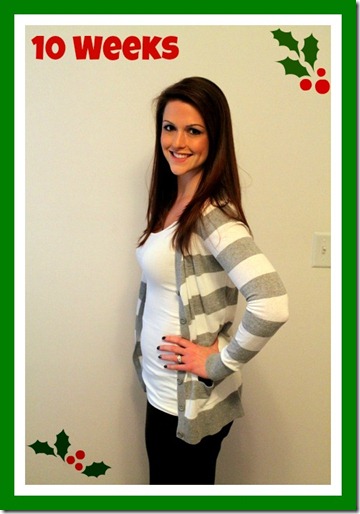 Now I can’t even make my stomach do that if I tried sucking it in.

Baby Tooth is just over 15 weeks today and is about the size of an apple.

Weight gained: No idea. I had a few moments this past week where I started feeling really crappy about body image. Back when Jay and I were (unsuccessfully) trying, I told myself that I’d never, ever complain about weight gain if I ever got pregnant. Well, I guess that was easier said than done.

There were a few times this past week where I found myself getting bummed out about how I look…just overall soft and puffy. It’s not just a little bump that’s forming…I’m getting bigger all the way around. Then I’d wind up getting emotional about things, like how I’m going to Mexico 20 pounds heavier this year than last year. Jay tried really hard comforting me, telling me I’m pregnant, but most of that is from when I was (purposely) putting on weight to combat HA.

I mean, the moments come and go but honestly, I would not trade any of this for anything…I guess it’s all just a part of the process of getting used to my changing body.

Workouts: FIVE this week! I had a few treadmill workouts and a couple strength workouts mixed in, and they all felt awesome. Seriously. It really does just help make me feel better about myself, and helps keep my energy up.

Unfortunately, I missed my package of new workout DVD’s when they tried to deliver them, but they should be here today so I’m planning on doing them this coming week. So excited!

Symptoms: More round ligament pains. Some days were worse than others this past week, and this past Tuesday, they actually got bad enough for me to call my doctor. Of course, she said that’s all that they were (I had no other symptoms) and that I need to continue to stay hydrated. Other than that, not too much. Still some breakouts, sore girls, and a puffy face (at least I feel like it). My energy is pretty great though!

Food Cravings: I did have one day where I decided I absolutely had to have trail mix. So on my lunch hour, I went out and picked some up from Target. Stuff is craaaazy good, and wicked dangerous.

Peanut butter and almond butter are also daily requirements. I actually just bought MaraNatha almond butter through iHerb.com and umm, it is the greatest stuff EVER. I’m obsessed.

Other than that, my biggest cravings have been Greek yogurt, avocadoes, Mexican food, and sweets. All of them…especially chocolate. I also had a major craving for fruit juice while grocery shopping on Sunday, which was odd.

Maternity clothes?: I feel like I’m getting closer to being able to wear some maternity tops that I got for Christmas. My dress pants for work are maternity, and I do have a pair of maternity leggings which I could easily live in; other than that, I’m sporting plenty of loose tops and jeans with the hair elastic around the button.

Stretch marks? Not yet! I usually apply baby oil in the mornings, then my lotions at night. If nothing else, I’ve got nice, soft skin on that belly.

Miss Anything? Yes. I’ve been missing high intensity workouts. I miss deli meat a lot, too (sometimes, there’s really nothing like a big, fat, turkey sub!). I also can’t lie…I really miss having a beer or a glass of wine. I know some people are okay with having a glass of wine now and then while pregnant, and I actually thought I would be, too. I’ve had a few sips of wine a couple of times, but other than that, I can’t have any more without feeling guilty. In the end, it’s just not worth the worry (to me)…but I do miss it!

Fun & Weird Stuff From the Week: Yesterday, as I was laying down, I also noticed this really weird, new feeling in my belly. It almost felt like somebody was taking two fingers and quickly pitter-pattering back and forth in the same spot. It happened again two other times that day, so I have no idea what it was. I hear some people can feel fluttering this early, although I hear most don’t and that it’s usually gas or something else. It was something I’d never felt before, and it was pretty weird, whatever it was!

Baby Items Purchased: Nada this week, but I’m still doing lots of window shopping. Once we find out that gender, all bets are OFF!

Looking Forward To: My next appointment – it’s next week, and although there won’t be any ultrasound, hearing that heartbeat will never, ever get old.

Questions for the Moms this Morning:

« Totally Unexpected
A New Element of Surprise to Dining Out »