Well, I’d have to say that yesterday was a bit…frustrating.

As some of you may have remembered from my last bumpdate post (or from reading Instagram), yesterday was supposed to be my scheduled induction date. We were scheduled to be at the hospital at 6am, so to make sure I had enough time to get myself ready and get ourselves there (it’s about 30 minutes away) I was up at 4:30am to start getting ready.

When I came back out from the shower, I noticed that I had a missed call and a voicemail on my cell, and I immediately got the feeling that it was the hospital. Sure enough, it was, and they told me I had to be bumped, to not come in at my scheduled time, and to call back around 9am to see if they had any updates.

At that point, I cried a little. I was already emotional from the night before (psyching myself out and getting anxious over the fact that it was our last night as a family of 3 and saying goodnight to Lucas…ohh, I was a mess) so all of this didn’t really help much. But since, at this point, it was still only about 5:15am, there wasn’t much more to do than go back to sleep. So we did.

We woke up to Lucas a little after 7am and hung out for the morning with him and my MIL (who had stayed the night to be able to be here with Lucas in the morning). We ate breakfast, and I called back the hospital at 9am sharp.

The woman on the phone told me that the hospital was still pretty packed and that they had no beds, but that my doctor wanted me to come in so she could evaluate me. So off we went.

We got there around 9:45am, did the whole registration thing, and I was brought to a triage room where they hooked me up to monitor the baby’s heartbeat and asked me 1,001 questions as part of the admission process. Finally, around 11:30am or so, my doctor came in. She said that it was a mad house there and that if I hadn’t made any progress that I likely wouldn’t be able to stay but she wanted to check. And sure enough, I was still only dilated one freakin’ centimeter.

She apologized quite a few times, but really, it wasn’t her fault. And honestly, if there were other women there in active labor then obviously, they take priority over me who bakes the babies that never want to come out on their own, apparently. But it was just so frustrating (and a little emotionally draining) to have to go through all of that to just be turned away.

So for now, I have a new induction date scheduled for this Friday. I’m trying to tell myself that maybe it all happened because I’m going to magically go into labor on my own at some point today (because I’m not totally thrilled with having to be induced again)…but I’m doubtful. Either way, I’m done with work at this point so if nothing else, it gives me a full day to just hang out and have fun with Lucas. 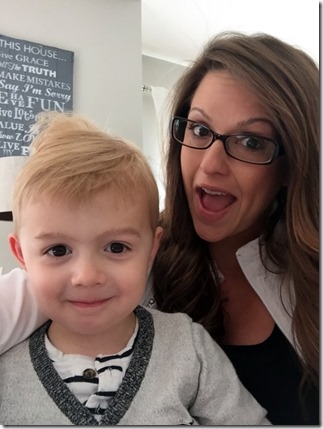 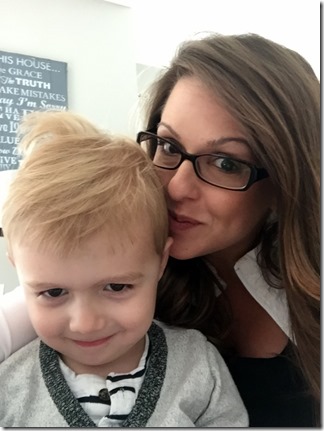 As for rest of yesterday though, it turned out alright. Jay and I left the hospital a little before noon and stopped at Ruby Tuesday for some lunch. The salad bar sounded too good at that point, and their strawberry lemonade was totally delicious. 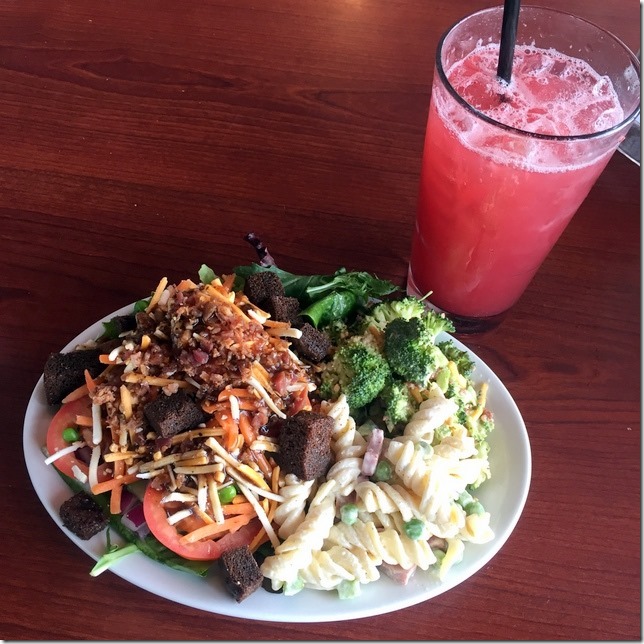 We also made a pit stop at Target to pick up a new exercise ball because I haven’t been able to find mine since the move. I figured, hey, I need one anyways so I might as well get it now in an attempt to bounce this little guy out, right? 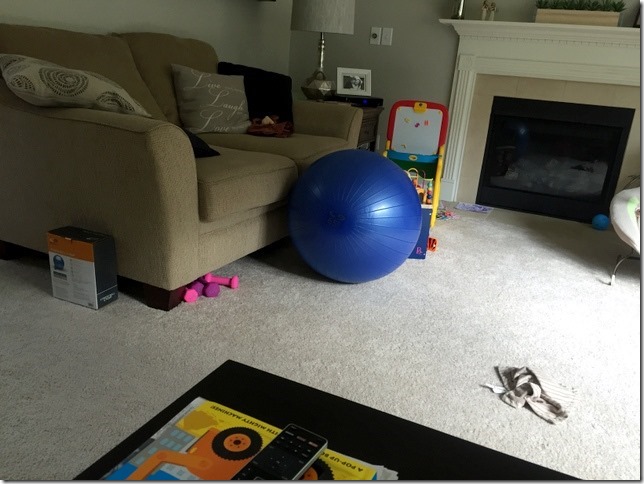 Oh, and we also made another pit stop for paper towels and Jay came out and surprised me with these pretty purple flowers to help cheer me up. <3 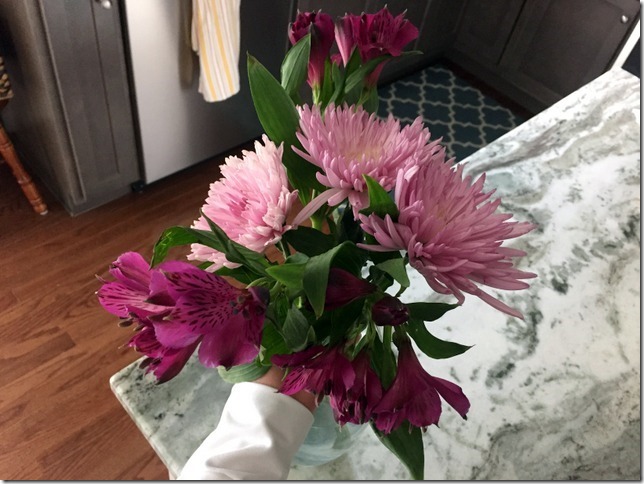 Lucas was napping when we got home, so Jay and I both took advantage and also napped for about an hour ourselves, along with this furry little guy. 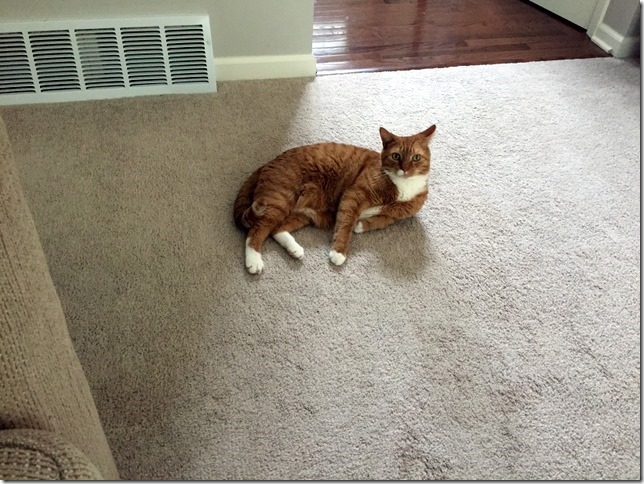 Once Lucas was up from his nap, it wound up being a pretty chill afternoon/evening for all of us. 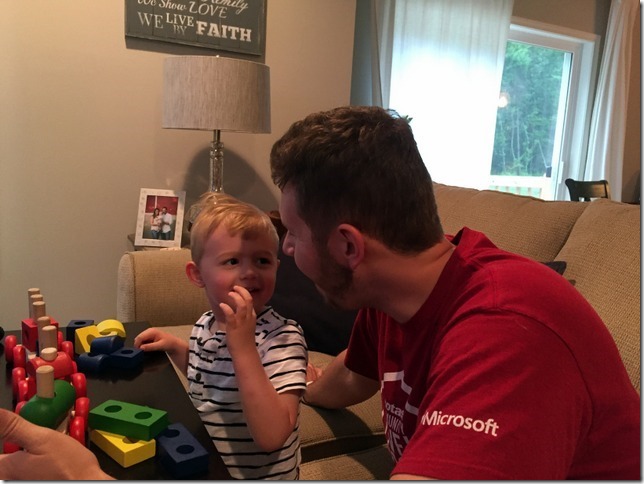 We hung out, played toys, watched a movie, and all took turns bouncing on the new ball. I’m pretty sure Lucas bounced more than I got to…he became obsessed with it! 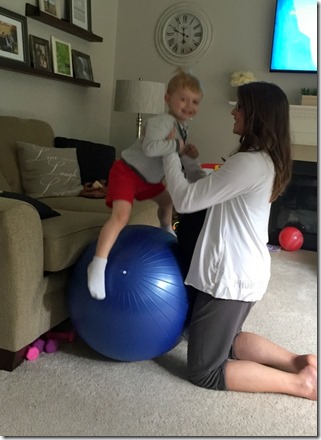 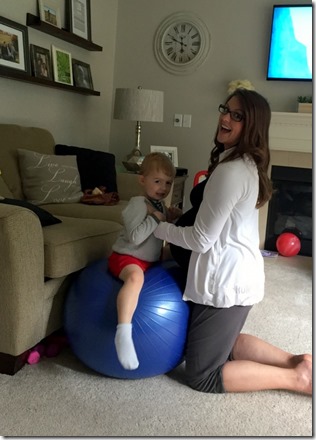 And now I’m sitting here, bouncing away on my ball, getting ready to finish up this post, and then I’m headed in for a big bowl of ice cream and some DVR’d Bachelorette on TV. As the day has gone on, I’m definitely feeling more okay about how things are going down (even though I’m still totally nervous he’s going to be huge) and I’m just trying to make the most of it.

Everything will turn out the way it’s supposed to, right?

Hope you guys are all having a great week so far, and hopefully, I’ll be checking in with some good news soon!