Oh man, what a GREAT weekend!

Of course, it was extra great since it was a bit longer than usual…starting off with a day of Christmas shopping with mom. We each made out pretty well with our Christmas shopping, along with a couple little things for ourselves, too. 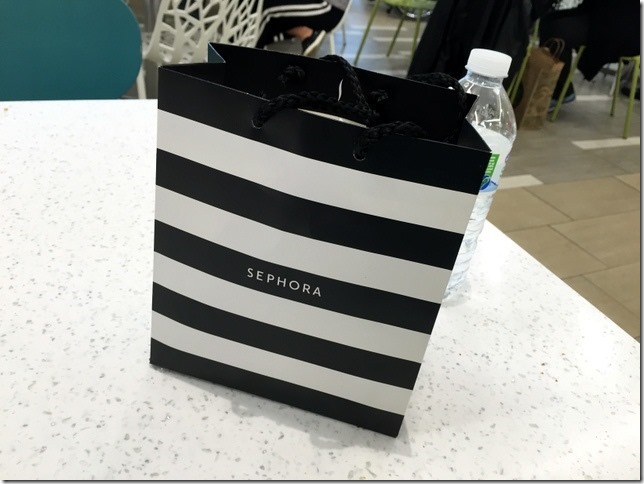 Once we finished up our day of shopping, I headed out to pick up my favorite little guy from daycare. I wasn’t quite sure what time to expect Jay that evening since he had called me earlier in the day to let me know that his mom was in a car accident and that he was meeting her at the hospital (thankfully, she’s totally fine, although her car isn’t looking too hot). So since I wasn’t really sure what the rest of our evening would bring and was waiting for some news, I decided not to go home right away and, instead, the two of us headed to Starbucks for a little mommy + Lucas date. 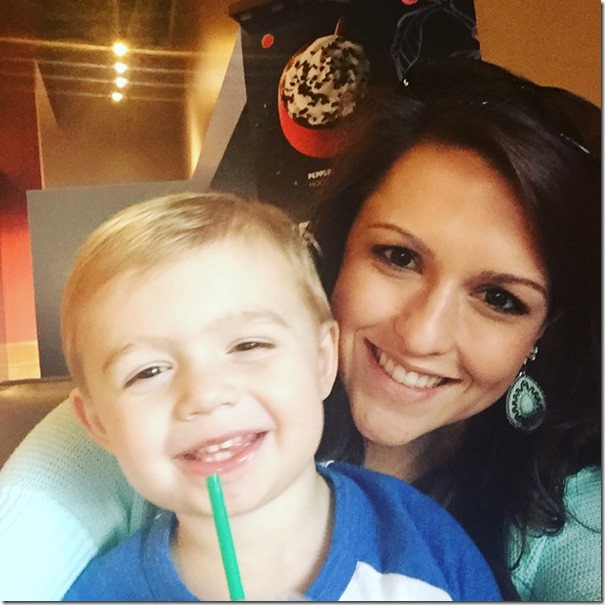 After telling him that he could pick out one treat, he immediately said “POP!” So that’s what he got. 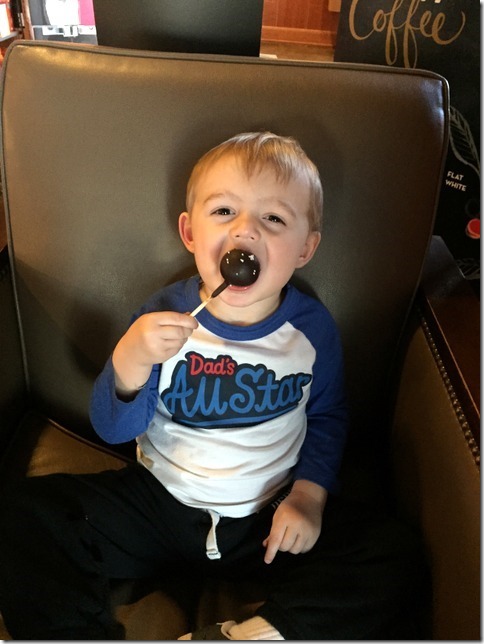 And for mom, a Toffeedoodle cookie. FYI, if you’re a lover of all things toffee and/or snickerdoodle like I am, you MUST try this cookie. I’m not even joking. 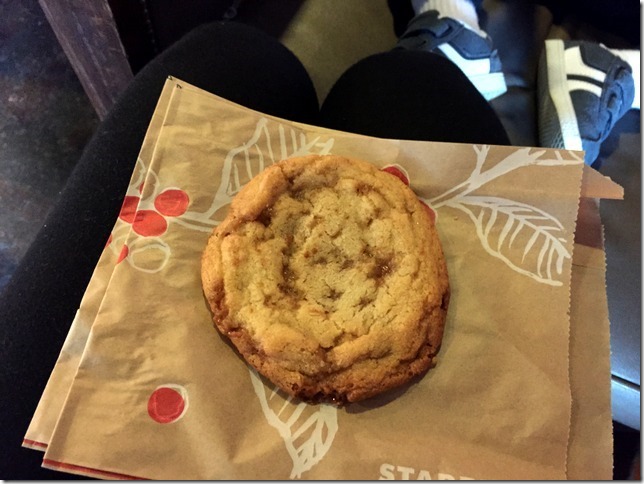 Jay’s mom stayed with us on Friday evening and we ate delicious pizza and hung low.

On Saturday, I started getting things prepared for my day of baking! 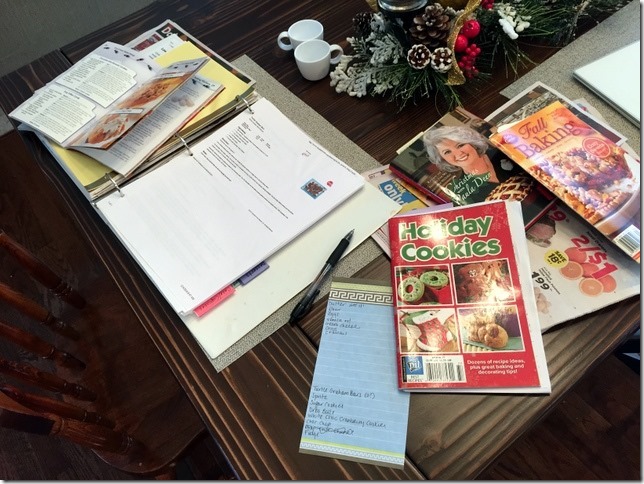 And, actually, got a little ambitious and made a fresh batch of homemade vanilla cupcakes with almond buttercream frosting. 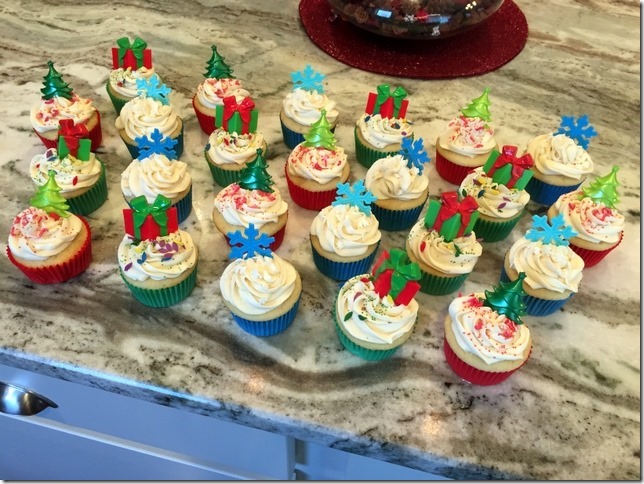 Of course, it got a little tricky when a certain someone didn’t want to nap and, instead, throw all of his toys out of his room… 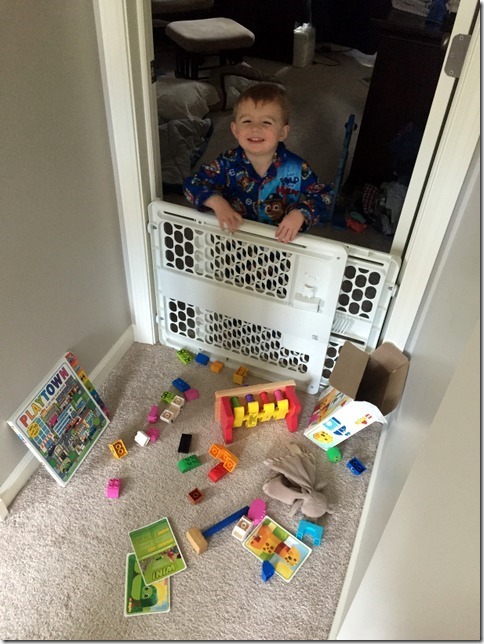 On Saturday evening, we headed out to a family Christmas party! 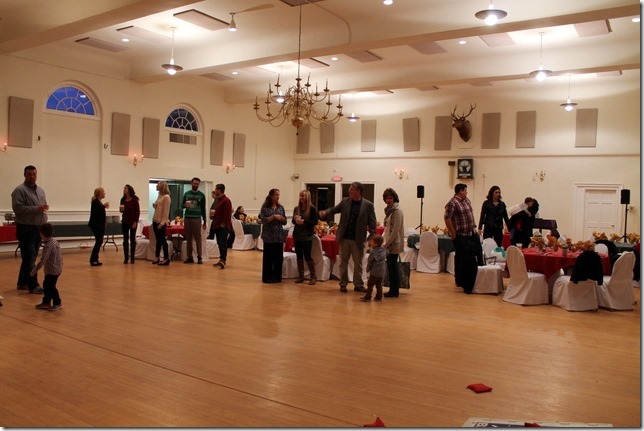 And because Jay’s side of the family is so huge, they rented out an entire Elks lodge. Quite the extreme from my side of the family with seven, right? But I love them both just the same, and it’s even better when you can call your family some of your best of friends. 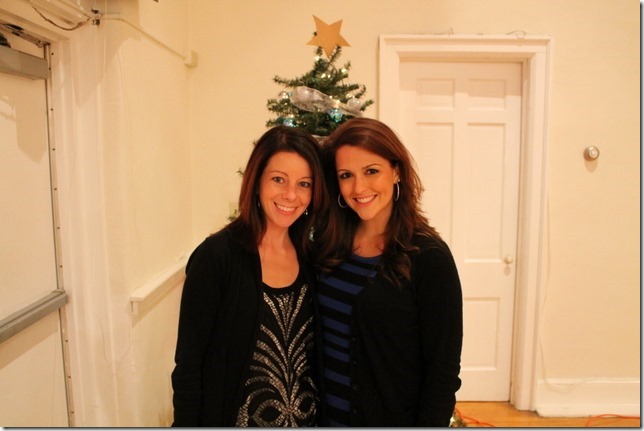 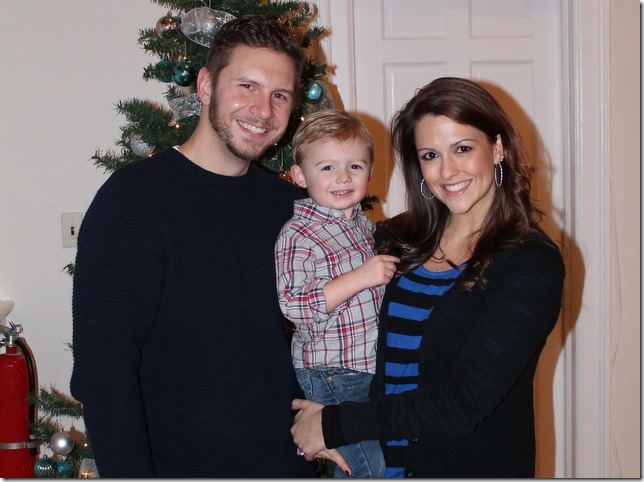 I got a little emotional at one point during the evening when many of the cousins got together for a photo opp for my father in law since he couldn’t make the party. 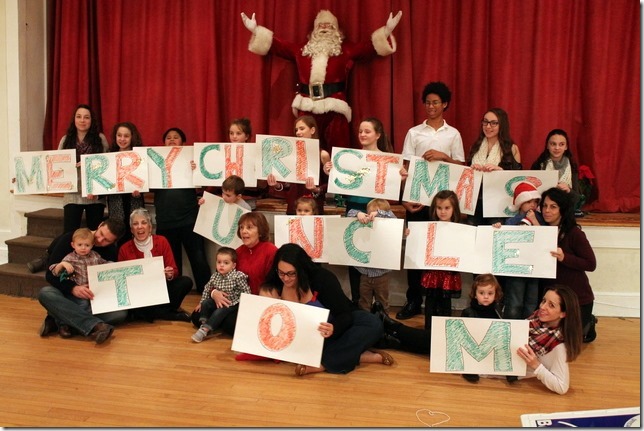 I’m emotional these days as it is, but seeing all of the love and the kind gesture just really hit me. It was incredibly sweet.

There was plenty of delicious food to be had for dinner. 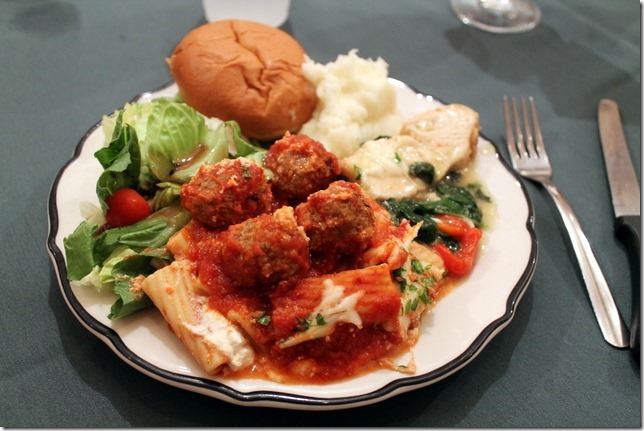 And then, a visit from Santa! Unfortunately, Lucas was still a bit reluctant… 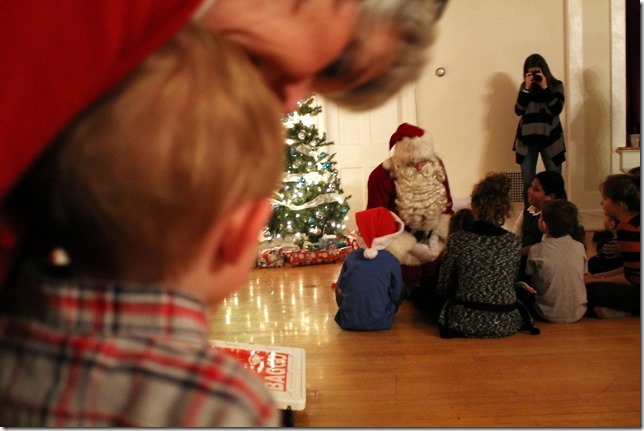 And this was pretty much about as close as he’d get to him. 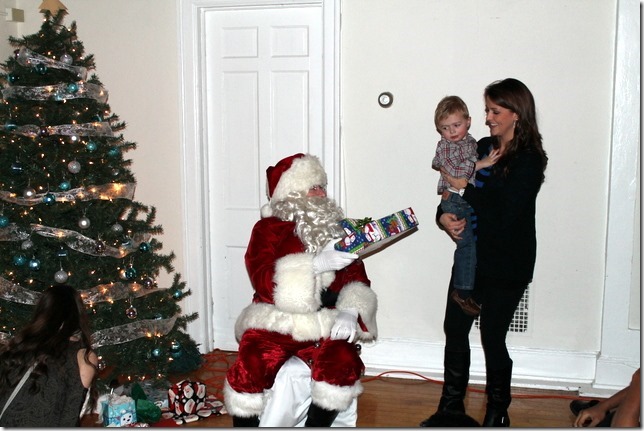 So I guess, two years in a row were a no go on the Santa front but, hey, there’s always next year?! 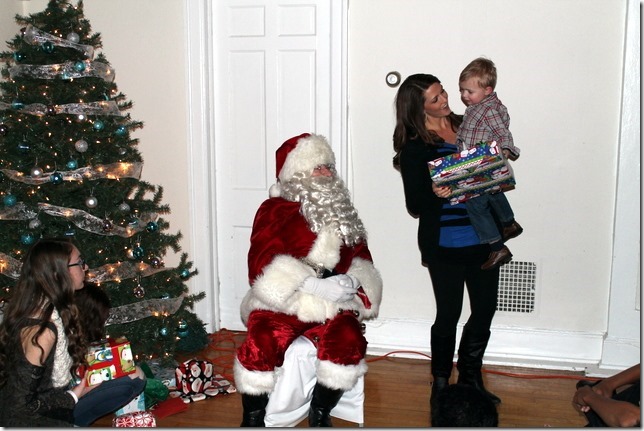 Santa did bring him quite the gift though…and I’ll tell ya, this may have been one of the best purchases I’ve made in a LONG time. 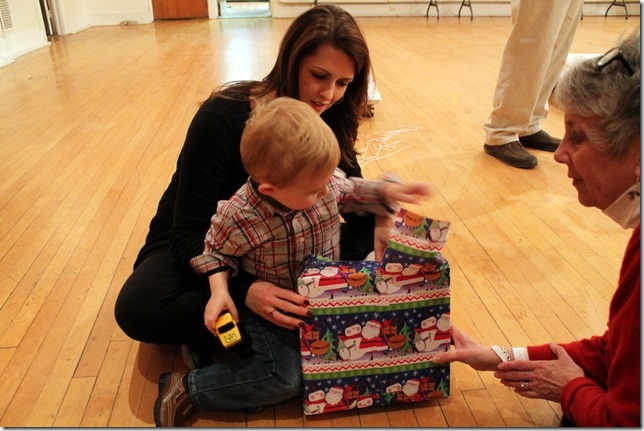 I found this set of six trucks on Zulily for like, $15 or something crazy like that, and he LOVES them. 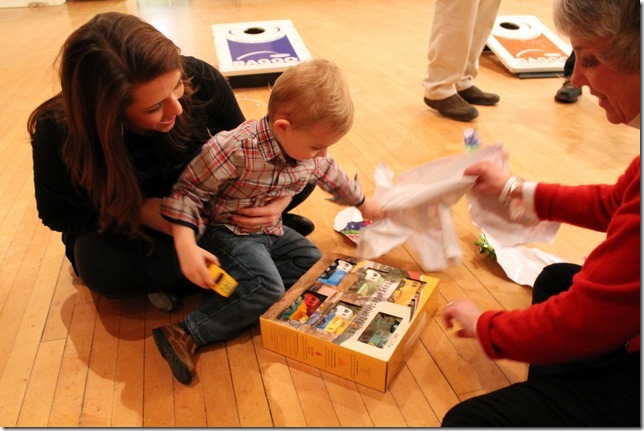 *They’re actually on Amazon, too! Although a bit more expensive than what I paid for them on Zulily.

The rest of the evening was spent chatting with family and watching the younger ones bust a few good moves out on the dance floor. 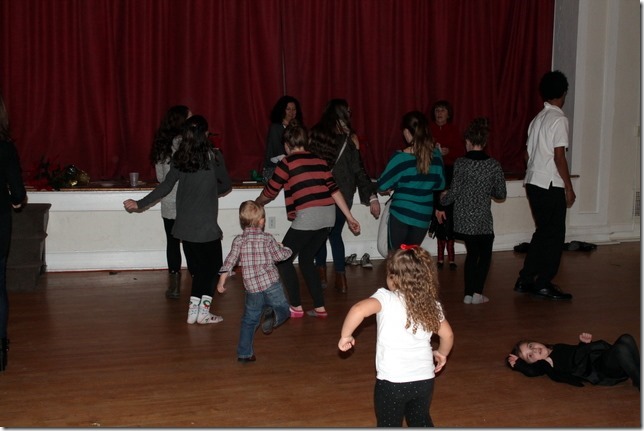 And Lucas almost had me in tears with dancing skillzzzz. 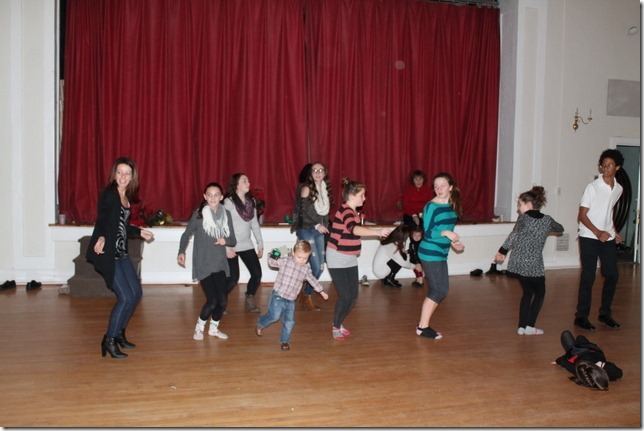 Sunday was low key but awesome. Jay was feeling a tad under the weather that morning (aka, he had a bit too much vodka the night before), so we made sure to take care of him. 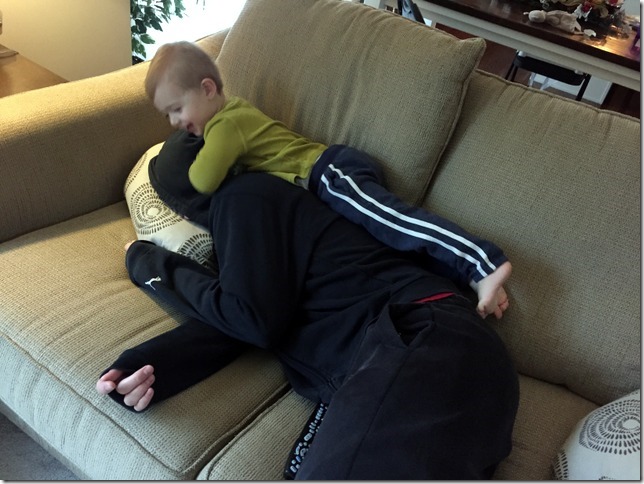 Other than that, not a whole lot went down. I got the grocery shopping done, woke up for an early morning workout (21 Day Fix Total Body Cardio), and started working on some blog stuff…that is, until someone decided not to nap. Again.

We were getting a bit frustrated since this was two days in a row again that he wouldn’t nap for us. But then we went up and realized that he had pooped and then immediately felt terrible. I decided to sit quietly with him in the chair and, much to my surprise, he actually fell asleep with me. 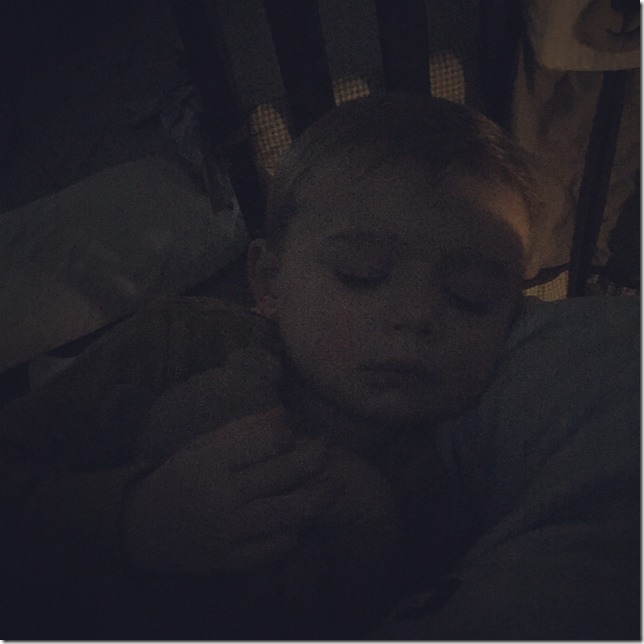 This NEVER happens and, I’ll tell ya…I may be a bit behind on blog work and house cleaning, but in the grand scheme of things, none of that matters when I get to snuggle with this face. I seriously MISS these days sometimes with him, seeing as though he’s alllllways on the go.

But it was about an hour and a half well spent, for sure. 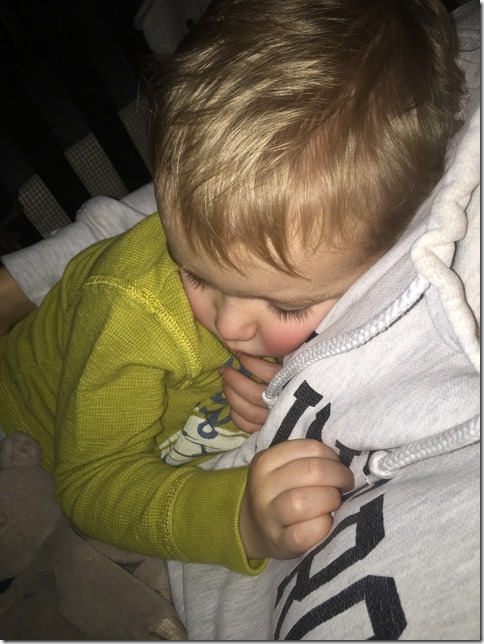 The three of us spent the rest of the evening just hanging out and playing, and we put him to bed last night saying just how lucky we are. It was one of those days where everything is just jiving, you know? He was in a great mood, no time-outs needed, and we were all just having fun. My heart is so full <3.

As for today, I’m not sure how much of my baking will be getting done as I was hoping. Lucas’s sitter had to cancel for the day, so I likely won’t be getting as many cookies baked as I had hoped for. But we’ll see how it goes!

How are you guys doing?? How was the weekend? Do anything fun or festive??

P.S. – A big HAPPY BIRTHDAY shout out to my little bro who turns the big 2-8 today! Happy Birthday, Dan!!