This morning definitely started out a lot smoother than yesterday – thank goodness – with only one minor glitch.

Before going to bed last night, I did a quick skim through of Exercise on Demand to get an idea of what I might want to do for a workout today. Since I didn’t incorporate an upper body workout yesterday, I knew that I wanted to get some weights involved, so I decided on the Rock Hard Total Body video (<—it’s always a killer).

Well wouldn’t you know, when I went to turn it on this morning, it was gone, which is exactly what I was afraid of (on Demand tends to rotate their videos from month to month). So I nixed that idea and ended up with:

Not too shabby for a last minute switch up!

I was going back and forth for about 5 minutes this morning, trying to decide how I wanted my eggs + English muffin…egg and cheese sandwich or eggs with a PB&J muffin on the side. In an effort to try to avoid another week long breakfast streak, I decided to switch it up and went with the egg & cheese sandwich.

I used a plain ‘ol English muffin, two scrambled Egg Beaters, a slice of provolone cheese, and some raspberry jam. 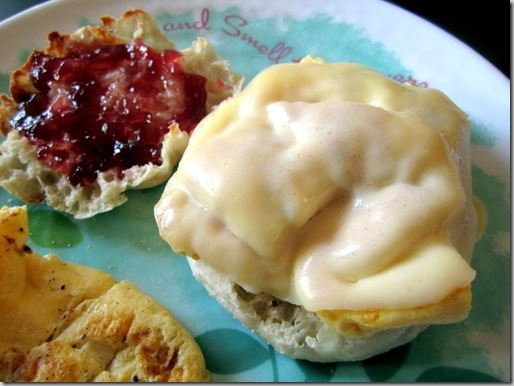 The eggs ended up being a little bit much to all fit on the sandwich, so some got eaten on the side. Still just as good. 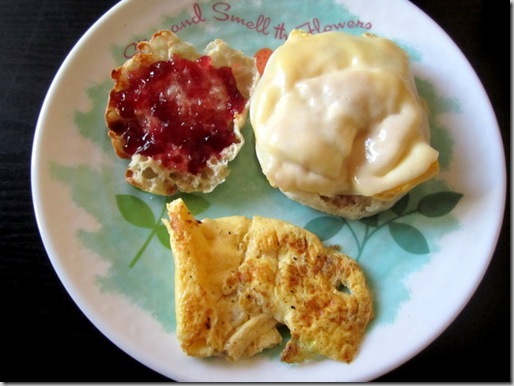 I was also planning on eating a banana with breakfast but I’m pretty full right now so I’ll just wait until my hunger inevitably strikes mid-morning and have it then. 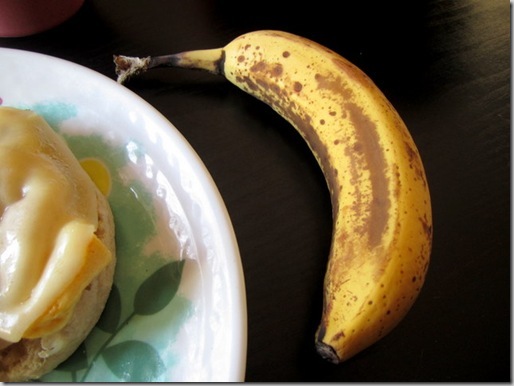 We’re back to regular coffee this morning too, and I must say that I am welcoming the change. I definitely need variety with my morning brew! 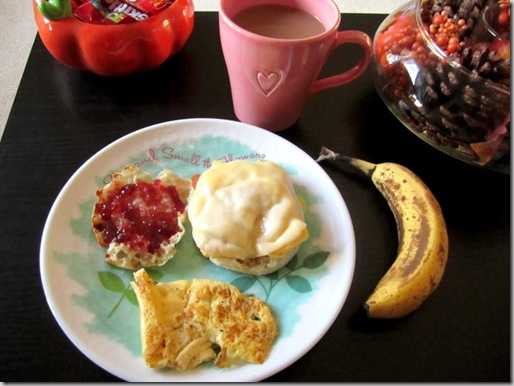 Did you guys notice the Skittles back there? Well, it turns out that the one set of trick-or-treaters that I told you about last night was the only one to come and visit us. 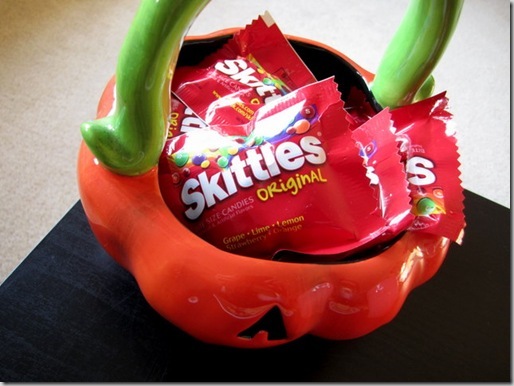 So now Jay and I have all of those to work our way through, which we did manage to put a small dent in last night.

Before I leave you all this morning, I just had to mention something about this story. I first heard about it maybe two weeks ago, and have been meaning ever since to bring it up. Have you heard about this yet?

Drew Manning, a personal trainer, has decided that he wants to see and feel firsthand what it is like to be overweight so he can get a better understanding of how some of his clients feel and the struggles that they deal with. All of his progress thusfar has been documented on his website, Fit 2 Fat 2 Fit.

He recently spent 6 months packing on the pounds; he cut out exercise entirely and has had an unrestricted diet. He mentioned how even the littlest of activity, such as climbing stairs, became a challenge. He now craves junk food more than ever and is totally addicted to soda, which is something he never drank before. In the first month alone, he gained over 20 pounds, and now at the end of six months, he has gained almost 75 pounds.

Now that he has put on the weight, he is planning on using the next 6 months to get back in shape as a teaching strategy for others. He will be documenting his progress and blogging about it so that others can follow his specific meal plans and workout routines.

My goal is to inspire people to get fit, teach them how to do it and give them hope that it IS possible to get fit and stay fit. I want to share my comprehensive fitness knowledge with my followers so that they can know how to lose weight successfully, even though for many it’s going to be a struggle.

I find this story pretty interesting and even though I know it’s mostly a big publicity stunt, I can definitely foresee myself checking in to see his progress. My guess is that since he has already been such a workout fanatic, it won’t be as difficult for him to get back in shape; but I’ll still be curious to see the struggles that he faces.

Personally, I don’t think I would ever put myself in this position; not only is it placing extra stress on his body, but I also just wouldn’t want to purposely make myself fat and take on that challenge for fear of not being able to be successful.

So let’s open it up to discussion – what do you guys think of this challenge and transformation? Is it smart? Would you ever do it?