Last weekend, I made 101 cupcakes. Remember that? Oooo yes, that was fun! 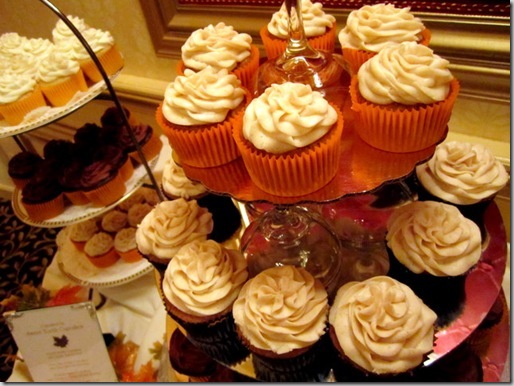 Well even after the cupcakes were all said and done, my fridge was still left with a bunch of eggs.

Last week, I put a call out on Twitter asking for some ideas on what I should make with my abundance of eggs; I ended up with a bunch of ideas, but a frittata was what stood out to me most. I ended up receiving an email from Lindsey who shared one of her favorite Spinach Frittata recipes with me that sounded beyond delicious. I had never made a frittata, but I was determined to try…so tonight was the night! 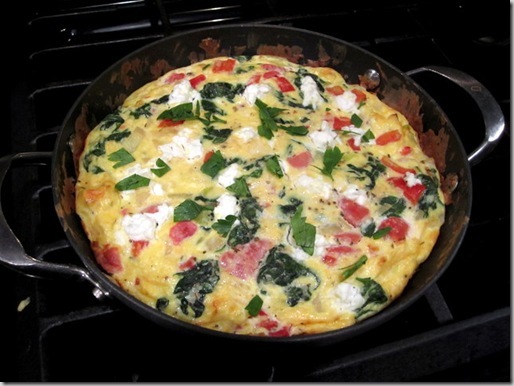 I was actually surprised at just how easy it was to make. I’m pretty sure I’ll be making some more of these in the near future, and Jay and I both really love how tonight’s leftovers will work perfect as tomorrow’s breakfast. 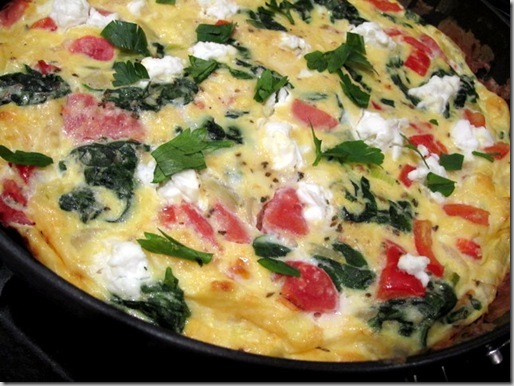 I ended up combining some veggies that I know Jay and I both love, and loosely worked off the original recipe that Lindsey gave me. She doesn’t have a source for it, so I’m going to just go ahead and give ya’ll my version!

Perfect for breakfast, lunch, or dinner. Feel free to swap in and out whatever veggies you enjoy most. 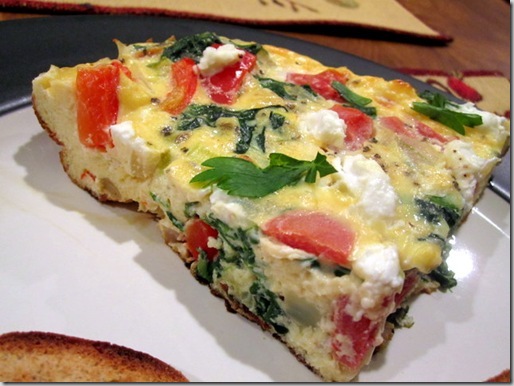 The frittata was cooked perfectly, and the flavors of all the veggies, plus the goat cheese, were incredible. Jay actually commented on how good the frittata was, “especially with the ricotta cheese on top.” Woops. Sorry, babe. Forgot to tell ya it was goat cheese. 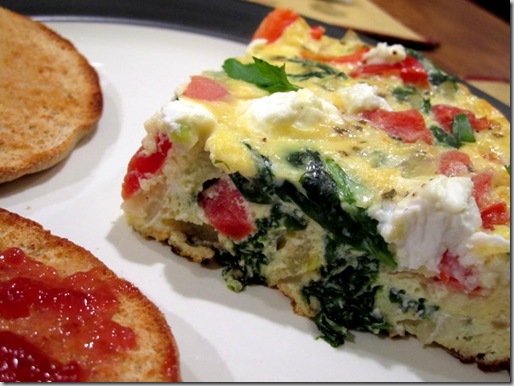 BUT, had I told him, and he would have been all over that with a “ewww that stuff is nasty, I’m not eating that” ordeal. Honestly, I didn’t even think to “warn” him ahead of time (I should have known better) but it all worked out in the end.

I served my frittata portion with a lightly toasted Arnold’s Honey Wheat Sandwich Thin, topped with some light butter and raspberry jam. 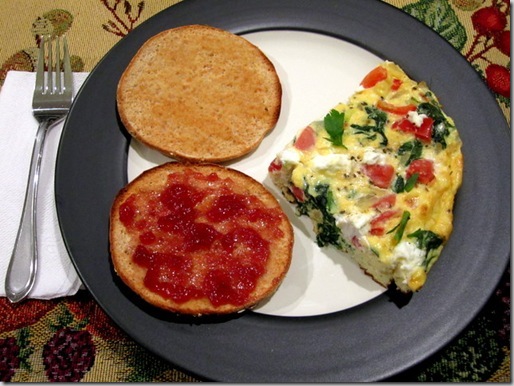 I am now, officially, a frittata fanatic!

Gotta go try to squeeze in a little more studying before my JETS game comes on…hopefully they don’t embarrass me too much this week. Yikes.

Are you a frittata fan? What meal do you prefer them at? Any favorite frittata recipes to share?

« My 10lb. Slimdown Xtreme Review
A Month Is A Long Time »