So after this morning’s breakfast, I was pretty proud of the fact that I had almost all of my nutritional bases covered…protein, carbs, ketchup, fats, fruit, caffeine, and dairy (in my coffee). The only thing I really had missing was some veggies…

No prob, folks. I’ve got that covered this afternoon. 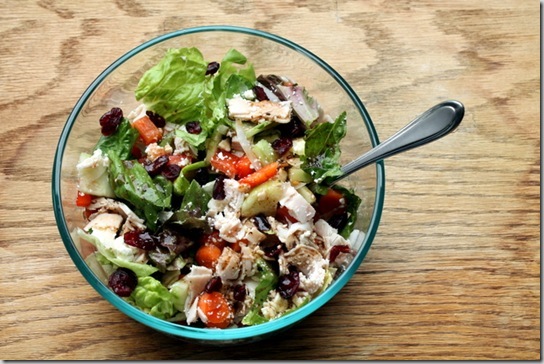 We’ve got a pretty decent amount of veggies in the house right now, so I figured I ought to use some up before they start to go bad on me. This bad boy is filled with romaine, cucumbers, tomatoes, carrots, onions, feta cheese, dried cranberries, and a few slices of deli turkey. 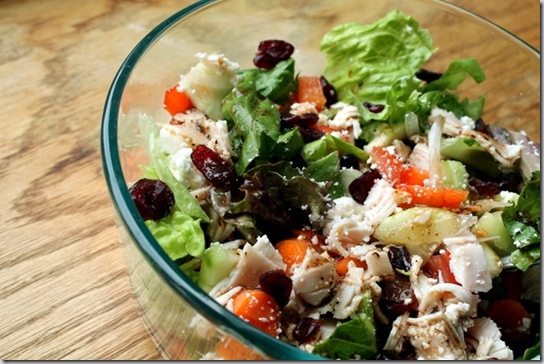 And when I say filled, I mean filled. 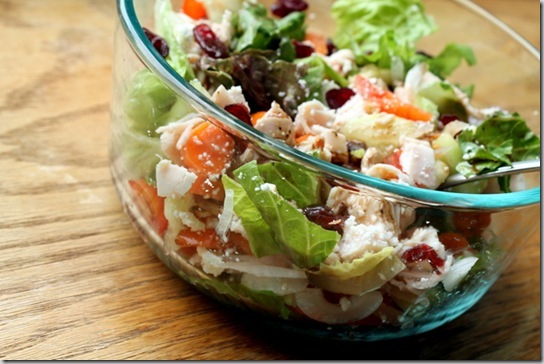 It was a good one!

Lunch happened shortly after I finished up with my workout for today. I had planned on combining a run with some yoga, but ended up nixing the run and just going straight for the yoga. I think I’m becoming a changed woman.

Today’s yoga was a favorite of mine, in the form of Jillian Michael’s Yoga Meltdown. I did level 2 today, since I hadn’t done that one in a while, but I’m almost tempted to say that both levels 1 and 2 are equally challenging in different ways. Anyone else have any thoughts on that?

I followed up yoga with 15 minutes of xtreme crunch abs, courtesy of Ms. Jackie Warner. Her videos are no joke, seriously. That 15 minutes had me sweating FAST. So much so that I even debated on showing you guys a sweaty self-portrait, but I decided to save you all the trouble. You’re welcome.

Time to get back to the day…hope you guys are making it a great one!

« Another Fun Numbers Day
My First Ever Attempt »