Okay, so yesterday was a really weird day for me.

I went to work for about five hours and had no problems at all; I got in some quality shadow time, got even more accustomed to the gym, met some new co-workers, and really had a great time. I had originally planned on doing a little bit of shopping after I got out yesterday, but I was feeling hungry so I decided to head home first to eat some lunch.

After a quick pit stop at Starbucks for my favorite beverage (because I have gift cards burning holes in my pocket) I made it home and put together a snacky sort of lunch (with no pictures, because I was lazy). After that, my mood suddenly took a total nosedive and I was in a complete and utter funk.

I had zero desire to do anything; shopping got nixed from my plans, I didn’t want to take pictures, I didn’t want to be on the computer…basically, I didn’t want to do anything. I tried snapping out of it by doing a quick, 20-minute yoga session, but no such luck. I curled up in my sweats – again – and wound up napping on the couch for about a half hour. Fast forward a few hours and I was in bed – again at 9:30pm – and ended up watching the rest of the Miss America pageant before dozing off.

I seriously don’t know WHAT was up with me? I had no good reason whatsoever to be such a grumpy pants. It’s not like there was anything bad that happened during my day, but it felt like it came out of nowhere, and I really just couldn’t snap out of it.

Looking back on it today, I’m really thinking that a big part of it had to do with a lack of sleep. I had a super busy week last week, with some pretty early mornings to boot. My schedule was a little wacky, which ended up messing around with my stomach a bit (as it always does…you know…like when you go on vacation? ‘nuff said) which is never fun.

Luckily, I was able to get about 10 solid hours of sleep last night and am already feeling a bit better today. Thank goodness. I don’t think Jay would have been able to handle another day of me like that again…

I think “grumpy pants” is putting it lightly.

But enough grumpy talk…I’m feelin’ better today, and woke up ready to make some breakfast. Good thing, because as it turns out, I ended up making three different ones…let me explain.

Jay requested some Scrambled Egg Tacos, since he’d been eyeballing them ever since I posted them earlier this week. I decided that today would be a good opportunity to try out another new Real Simple recipe, so I went for it… 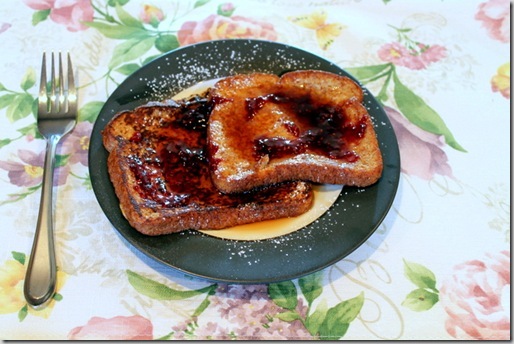 This recipe was super easy to make and I really didn’t have to make any substitutions (except that I used PAM in place of butter in the skillet and used sugar-free syrup). It looked really good and I was super excited about it, but unfortunately, it wasn’t really my cup of tea. 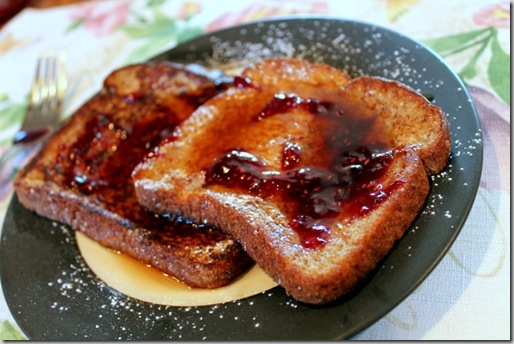 The flavor of the syrup + raspberry preserves was incredible, but the bread was just too mushy for my liking. Jay and I both sort of French Toast snobs when it comes to the bread…if we’re going to eat it, we like it to be the thick stuff. The real deal. You know, like that amazingly delicious batch I had over the summer. 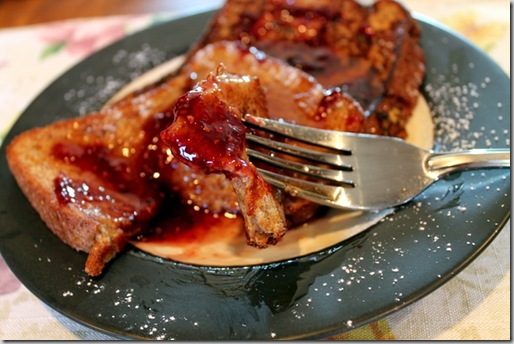 Unfortunately, this just wasn’t it. 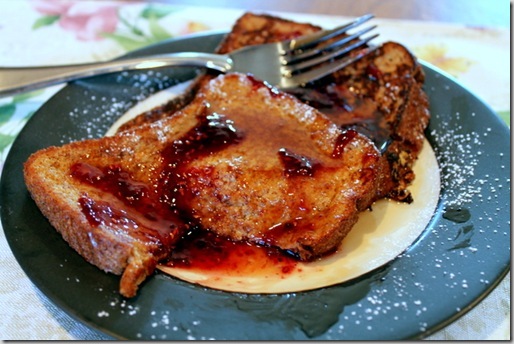 Luckily, today is Sunday and I wasn’t in any rush to get anywhere or do anything, so I tossed the soggy toast, poured my mug of coffee, and got to work on breakfast #2. 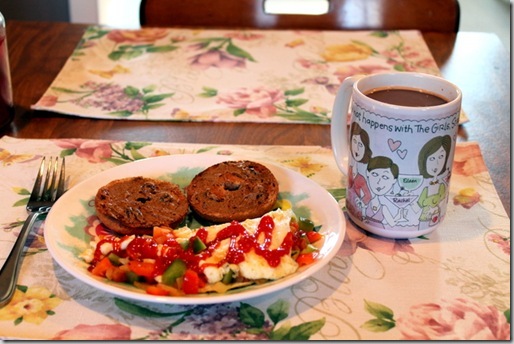 I don’t know what my deal is, but I’m still totally crapping out in the omelet-making department. Hey, at least they’re a bit prettier than last weekend. I filled today’s egg white omelet with some red and green peppers, onions, tomatoes, and avocado…all topped with a bit of ketchup, of course. 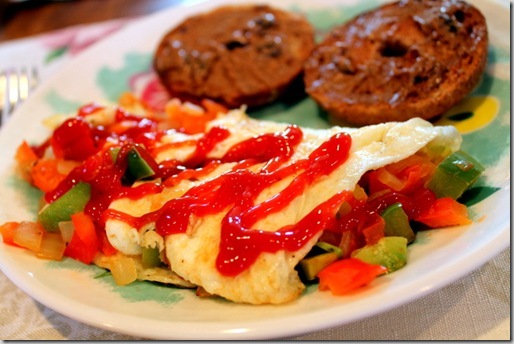 On the side, I had a toasted whole wheat mini bagel, topped with some cinnamon raisin swirl peanut butter. 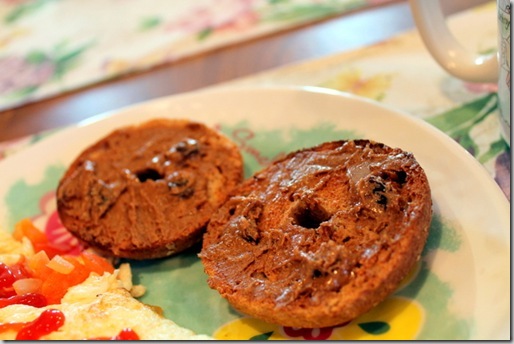 Some of you were surprised that my bagels are mini, since they don’t always look like it, but I promise you…they are. They’re the perfect size to fall right into the top of my coffee mug. 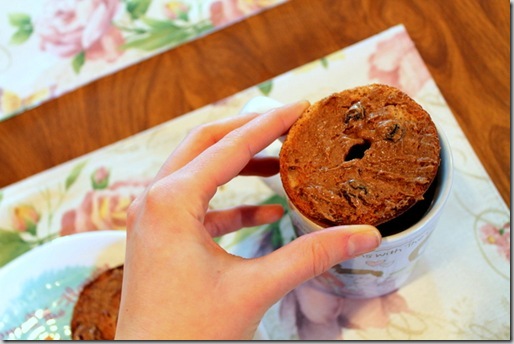 Speaking of coffee…today’s was a real treat. I made my coffee as usual (skim milk + Truvia) but then I added in two tablespoons of sugar-free hot cocoa mix. 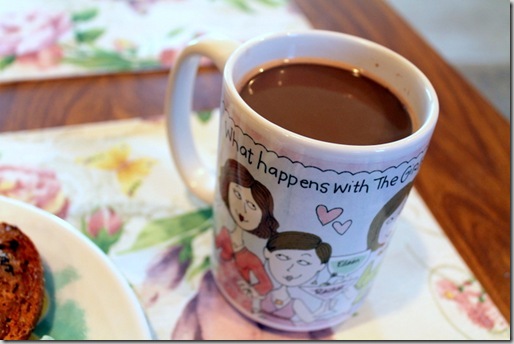 Yes! The hot cocoa coffee made a comeback today. I can’t believe I had gone so long without it. It’s seriously so so good. I’d definitely recommend giving it a try.

Alrighty, folks. Time to go try to take care of some of the usual Sunday things, plus figure out what to make for dinner. Hmmm…anyone got any good ideas?

« Any Guesses?
Just What the Doc Ordered »