By the time I got home last night, made dinner, and finally sat down to chill for the evening, I just didn’t have in me to write. I was wiped and really just needed to veg out with my boys and watch some mindless television…it was perfect.

I really don’t know why I was so wiped yesterday though; I mean, I didn’t get that much less sleep the night before? But I guess maybe the busy day from before was just catching up with me. Who knows. But since I had allowed myself to sleep in yesterday until, umm, the very last possible second, that meant that I left myself zero time to make a lunch. So on my lunch hour yesterday, I took care of that issue no problem, giving me the first highlight of my day. 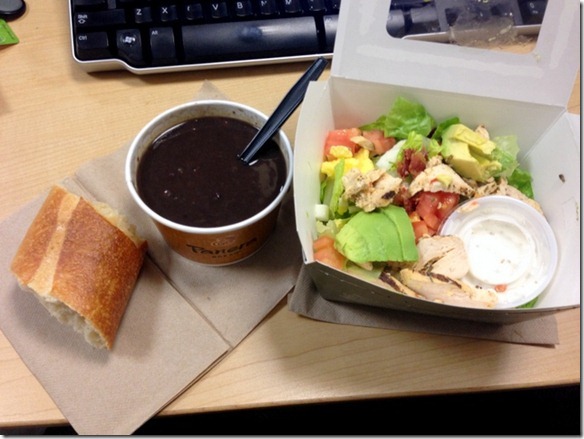 Oh, Panera. How I love you.

I went with the always-favorite “You Pick Two,” including half of my new salad obsession, the Chopped Chicken Cobb with Avocado. 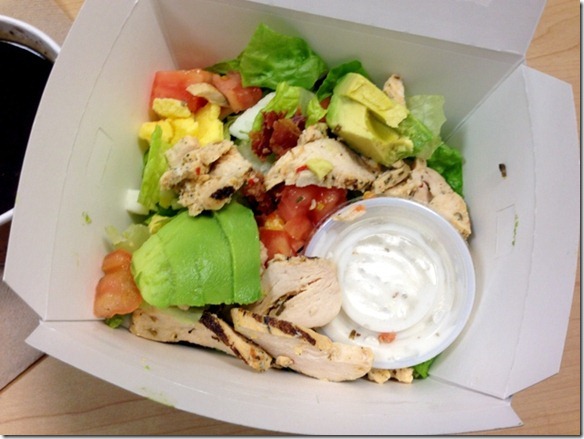 My number two of the “You Pick Two” was actually new to me: the Black Bean soup…which, seriously, looks like sludge doesn’t it? Yikes. 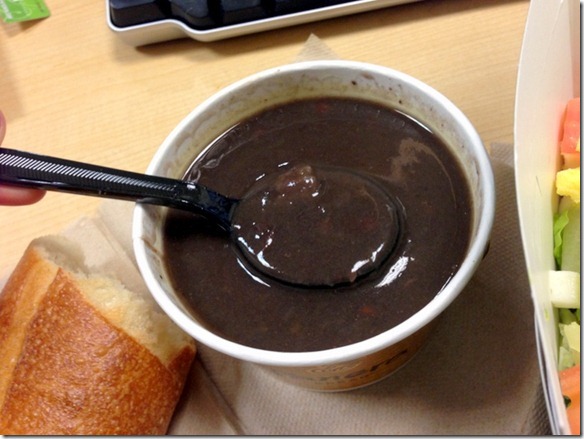 Thankfully, the soup tasted phenomenal, quickly proving that its looks just do not do it justice.

The second exciting highlight of my day yesterday was, because it was Thursday, that meant that I got a new delivery from Field Goods! 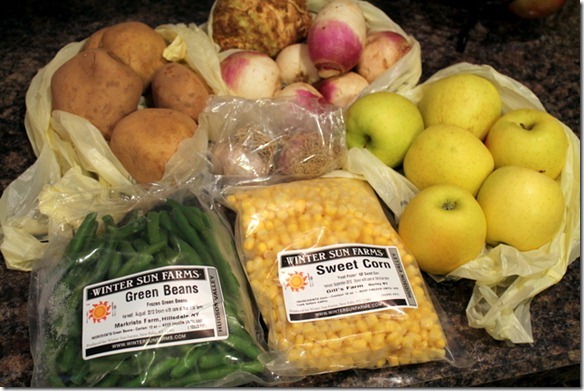 I actually still have a couple of items left from last week’s haul, so I wasn’t sure if I should continue with this week’s order; but when I saw the “what’s in the bag this week” email on Monday, it looked too good to pass up.

Included this week were some frozen green beans and corn (they were wrapped in insulation and bubble wrap and had only slightly thawed), 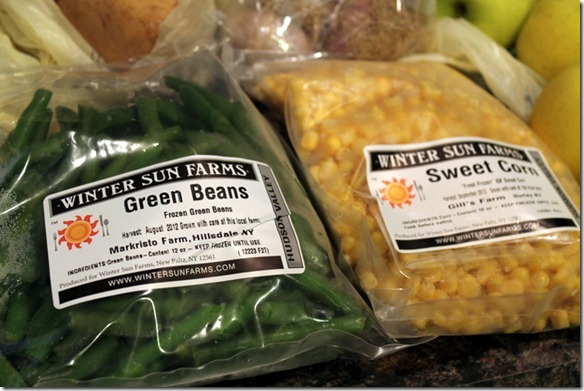 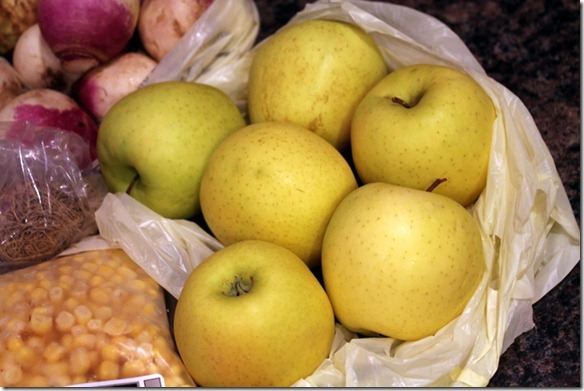 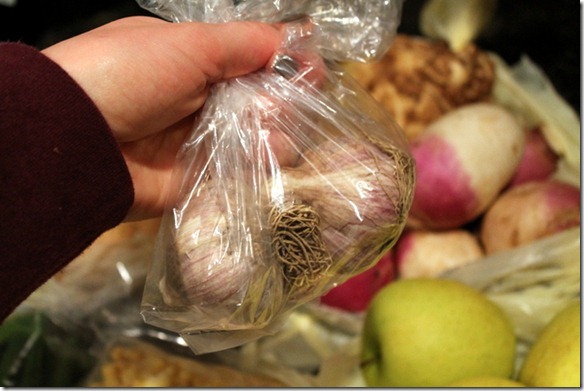 White potatoes, purple top turnips, and only one new-to-me veggie… 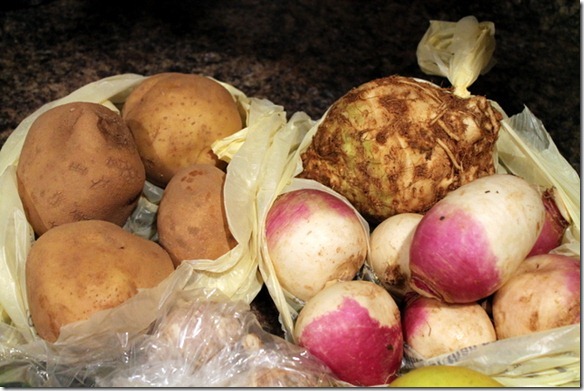 …and that veggie would be celeriac. Have you guys ever heard of this one before? I had to laugh, because even in the email that we received, it was described as “the ugliest vegetable you will ever love.” Umm, yes. I think they were spot on with the ugly part. ;) 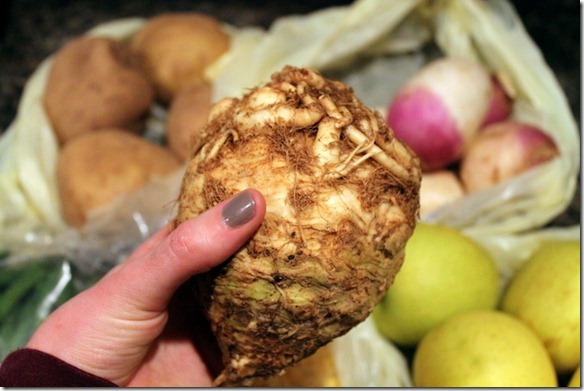 Apparently, celeriac tastes like a blend of celery and parsley and can be fried, baked, or boiled. I’m going to have to do some research on this one, but it seems pretty darn interesting.

So last night’s dinner? Definitely a highlight from my day, and ohhhhh man was it good. Well, for one, I roasted brussels sprouts for the first time EVER. 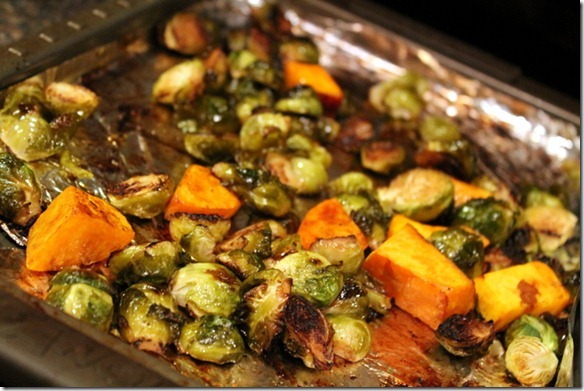 A co-worker of mine recently found out she can’t eat them, so she offered to give them to me after I had told them I’d never made them myself. I roasted them in a blend of balsamic vinegar, EVOO, salt, and pepper, and they weren’t bad. I can’t say they’re my favorite, but I liked them and I’d be willing to try cooking them again a different way (perhaps the way another co-worker of mine said he does them, with candied nuts and bacon…ummm, yes please?).

To go along with my brussels sprouts, I actually wound up using one of my Pinterest recipes! I had originally planned on following it exactly, but I wound up veering totally off course and went with a little version of my own. 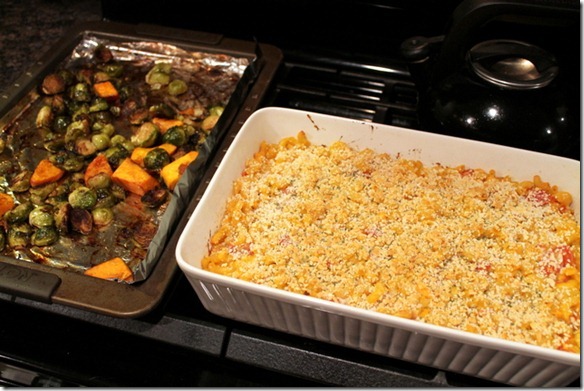 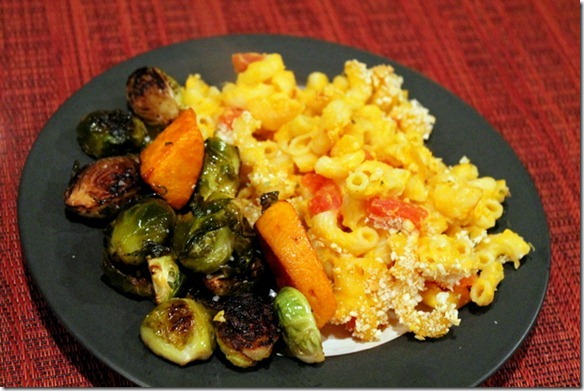 I didn’t have time to write everything up this morning before work, but I’ll have a recipe for you guys later this afternoon.