Holy cow. Yesterday was one LONG and busy day, but it was all good so I can’t complain. We’ll just forget about the fact that I may or may not be walking around in a semi-zombie state with greasy hair.

The day started out as normal yesterday, heading in to work, getting settled, and eating breakfast while I checked through some emails. 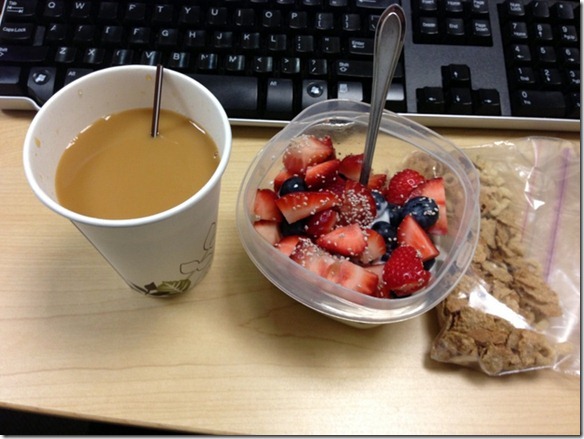 Breakfast consisted of coffee and a yogurt bowl made with vanilla Chobani, strawberries, blueberries, chia seeds, some Special K Protein Plus, and plain Cheerios. Yum. 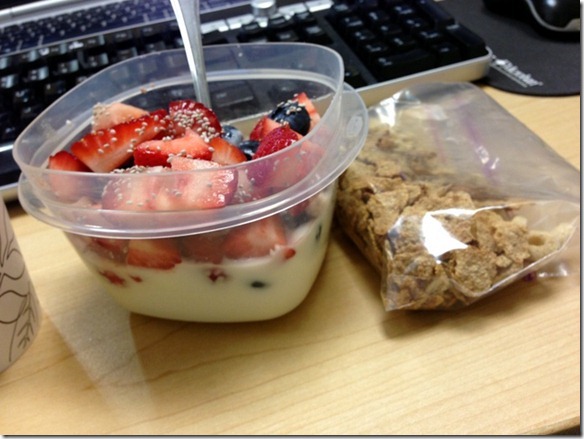 This week at work has actually been fairly quiet, since a good majority of the office is, well, out of the office. Not only did we have our company kick-off meeting last night, but there were also meetings all day yesterday and today which many of the sales people and executives have to attend. (I’ll get to a little bit more about that below!).

Mid-morning, I started getting hungry again, so I made myeslf a quick snack of an apple plus cashew butter. 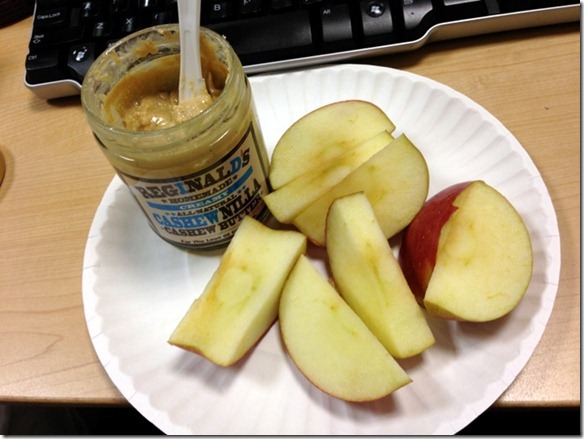 Unfortunately, I don’t think I’ll be having anymore cashew butter for a little while, after talking with the doctor a bit more at my asthma appointment yesterday. YES, the asthma appointment. Let’s get to that for a second…

First things first, the appointment was GREAT. A gazillion times better than my last one, and the woman I saw yesterday was not only a lot more friendly, but she was also so much more thorough with everything. Rather than try to scare me silly, she sat down and talked over everything with me in so much detail. Thankfully, my numbers were MUCH lower yesterday with my retests, so she said that was a great sign and that they’ll probably continue to drop as I continue to use my prescribed inhaler.

But in addition to talking about the asthma, she was also incredibly thorough. She went back through all of my records, including all of my allergy testing and food allergies. While none of my food allergies are strong or severe, she said that two of my biggest are cashews and hazelnuts. That being said, I eat them and never get a reaction, but she said it wouldn’t hurt to try to stay away from them if possible, just in case I were to get a reaction. That being said, I think I should probably pass on that cashew butter from now on. ;)

After my appointment yesterday, I stopped home quick to change for our company meeting and ate a quick lunch. The only thing I was really in the mood for was peanut butter and banana, so I had them on some waffles, since I don’t typically have those during the week now. 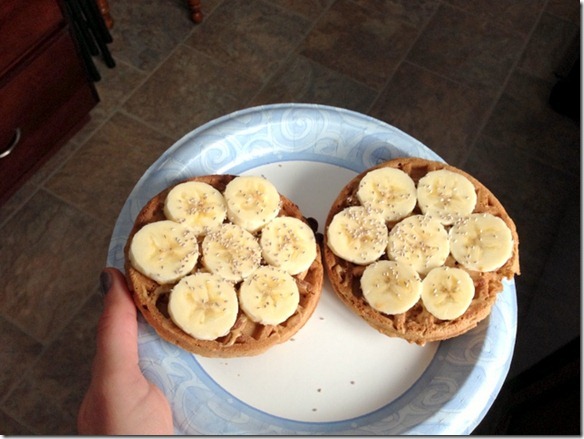 After that, I headed off to our company meeting in Saratoga…

Now, I just have to say that this was one pretty awesome meeting. Do you guys know in movies where they have like, those big company meetings with the stage and the lights, and the big screens, and the CEO standing up on stage giving his presentation? Yeah, that was OUR meeting. I don’t know, maybe it’s because I’ve never experienced anything like that before (prior to this, most important meetings of mine were either in a school faculty lounge or the PT’s office at a gym) but it was just SO cool.

While I’ve said that I’m not going to get into great detail about where I work (just because I don’t think it’s important or necessary) I am an office administrator/executive assistant, and the company just seems like an incredible place to be. We’re also a global company, so for yesterday’s meeting, we had our whole team flown in from all over the world…the UK, Spain, France, Germany, China, Australia, South Africa, Italy…I mean really, ALL over the world. It was such an awesome experience, to get to chat and mingle with these co-workers of mine who are from such diverse places and cultures. Everyone was so ridiculously friendly and welcoming, and I became more and more increasingly aware of just how lucky I am to be where I am right now.

After our meeting, there was a cocktail hour (many co-workers now know about the little one, if they didn’t already!), dinner (delicious food!), and a “Night at the Races” theme party. We had a horse race theme, where we were given chips to bet on horse races that were projected on a large screen. Then, there was a silent auction where you could bet your winnings on a bunch of different prizes (I won a $25 iTunes gift card!), as well as a DJ and dancing. I wound up staying at the party until a little before 10pm before calling it a night and heading home.

So yes, it was a long day, but a good day. I’m pretty exhausted today, and my morning workout streak got cut a bit short, but I’m hoping to get back to it tomorrow, after I’m able to go home and crash hard today after work. ;)