Do you guys remember back in April when I was down in NYC for a little video shoot? I know I already told you guys I was working with Fitness Magazine and Oster®, to help promote a huge challenge they’re putting together, and I also teased you a little bit last night on Instagram…

Be on the lookout for us in the July/August issue of Fitness magazine!

Well now I can finally spill some more details, because the challenge starts today!

While we were down in NYC, both Anne and I spent the day filming five different videos (in addition to the teaser video above, which was definitely our favorite and the most fun!) for the Oster® Versa® 1100 Challenge. Each of those videos are actually going to be airing this week on The Better Show, too!

(You can check your local listings HERE, but for my local friends – it airs on FOX at 6am!)

Each day this week, a new video will air on the show (I’m not sure which time). They’re super quick (only a minute to a minute and a half long) and they each feature a different recipe and a different way to use the Oster® Versa® 1100 Performance Blender (it’s SO versatile, seriously!). As a side note, the whole experience quickly helped me realize that I actually do not always naturally smile while I talk. So the entire time, I felt like I was trying to not only prevent myself from looking like a total cheeseball, but also making sure I didn’t look like a meanie. I suppose this pic would prove otherwise on that though…

Alright, let me give you guys the low down…

The Oster® Versa® 1100 Challenge runs from June 23 to October 31, where there will be 3 challenges back to back, with each one featuring of the recipes that we filmed. Each challenge will come with its own great prizes, and one lucky Grand Prize winner will be selected to win a $5,000 Walmart shopping spree. Saweeeeet, right?!

For each challenge, Oster® is inviting everyone to enter the contest by creating the featured recipe for that contest period, then sharing a picture of the finished product on Instagram using the hashtag #versachallenge. It’s super simple! One big heads up though…make sure that your account is public so they’re able to see your photos!

So the first challenge recipe, starting today, is the Pear & Pineapple Green Smoothie, which is so. freakin. good. you guys. 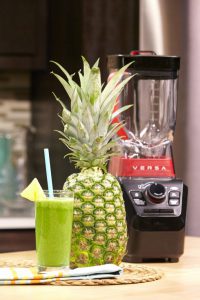 I’ll share some more about the smoothie and my experience with the blender later this week, but for now, I wanted to make sure you guys had the recipe and knew about the contest so you could go ahead and ENTER, already!!

To check out more tips, fun photos and videos from both Anne and Yours Truly, be sure to visit FITNESSMAGAZINE.COM/VERSA.