I’m hoping that if I repeat this enough, it will actually remain true.

This morning when I woke up, I had a little bit of a scratchy throat, but I tried telling myself that it was just one of those “I slept with my mouth open too long” sorta things. Unfortunately, as the day has progressed, the scratchiness has yet to subside, and I’m starting to feel the sniffles coming on.

I’ve been trying to keep on top of my usual cold remedies, so hopefully I’ll be able to stop this thing dead in its tracks. Fingers crossed!

Mid-morning, after I finished taking care of the grocery shopping I’d been putting off, I came home and decided to try the new Passion Fruit Chobani yogurt. 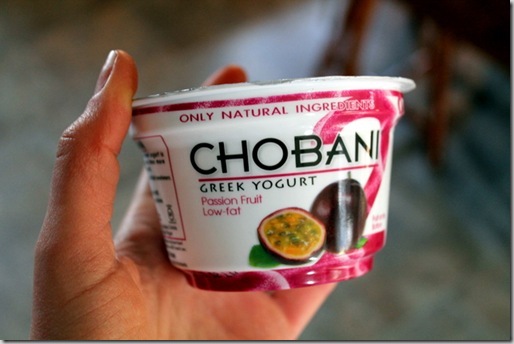 I’ve had these in the fridge since last week when they sent me my goody box of all three of the new flavors, but just haven’t had the chance to try this one until today.

So what’s the verdict? Well, the passion fruit flavor is absolutely amazing, and I love the extra creaminess that you get from it being 2% (another reason the Pineapple flavor is a favorite of mine), but I had a really hard time getting past the seeds. 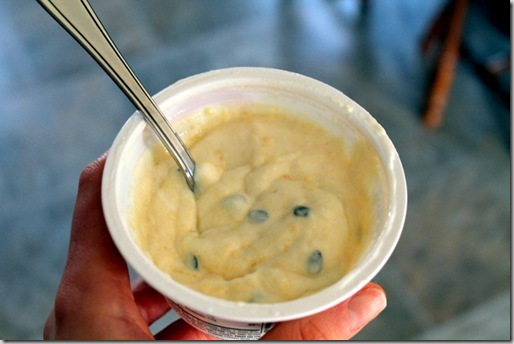 Those little buggers were rather crunchy in there, but that being said, I don’t think they make this flavor a deal breaker for me. The flavor was too good to pass up so I’m thinking next time maybe I’ll just try to sift through them a bit.

After my snack, I decided to squeeze in a workout. I was feeling okay to sweat a bit, but yesterday’s workout left me rather sore today, so I opted for something a bit more low key and went with my Sweaty Mess WALKING Incline Intervals. I say “low key” but this workout is hardly that…it’s just a nice change of pace from running. You’ll definitely still get your sweat on, trust me.

Yesterday’s salad was so yummy, and the veggie drawer in our fridge doesn’t appear to be dwindling at all, so I did a repeat. 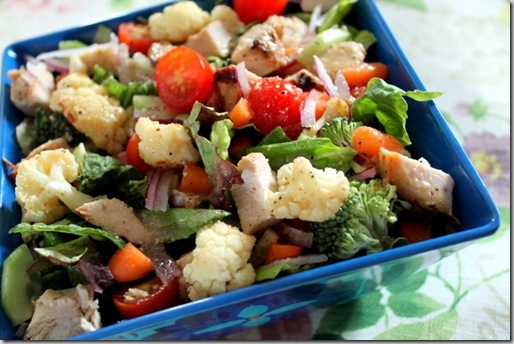 Same salad as yesterday, still just as tasty. On the side, I also had a fresh orange. 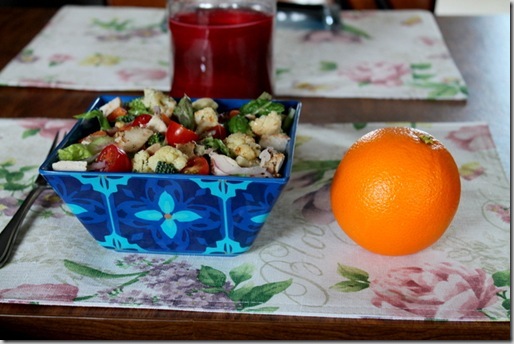 I’ll be heading out for my shift at work in a little bit, which is actually another one that I think it going to require some figuring out on the meals/snacks front. The shift is from 3-8pm, and I’m still trying to decide how I want to tackle this one (since it includes my usual afternoon snack & dinner times), but I’ll be sure to let ya know what I come up with.

« The Big Birthday Dinner
She Ate Her Words »