When I originally thought about how I wanted to write this post, I hoped and prayed that I wouldn’t have to write it with this outcome. But here we are. So I’ll start with what I originally planned to share.

It’s hard to believe that we’ve now been out of our old house for almost a month and a half. The days and weeks leading up to the move were stressful, and they were sad, but they were also promising thanks to new beginnings on the horizon. And then the day came, and it was time for us to finally say goodbye to the place we called home for the last 6 years. I was sad and I was nervous, but I knew it was for the best and exciting things were to come.

Little did I know, however, what kinds of exciting things were to come. And just how soon. Because that very morning we were getting ready to say goodbye to our home, I also discovered that I was pregnant.

I remember staring down at the test in disbelief, about a million different thoughts running through my head. I can’t say it was a total shock, because Jay and I had committed to “giving it a go” that very month, but it was also the first month we’d decided to start trying. And given the difficulty we went through with Lucas, never in a million years would I have thought it would happen the first month we tried. 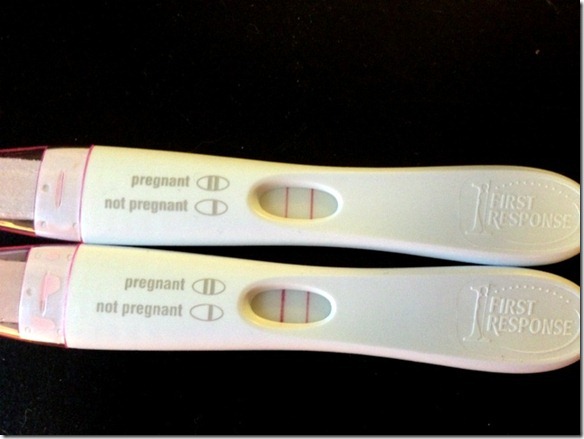 I shared the news with Jay as we were standing in our kitchen and I think I totally caught him off guard. His reaction was priceless, and the two of us just stood there, nervously laughing and thinking oh my gosh, this can’t be real?! But there we were, it was real, and we thought wow…what a great, lasting memory to take with us from our first home.

Shortly after I tested positive, I scheduled a visit with my doctor to get blood work done. They wanted to check my hormone levels to make sure they were rising (they should double every 48 hours). On June 2nd, I had my first round, and I followed up again on June 4th with the second. By the 5th, I received word back that my levels were “rising nicely,” having doubled, and that I should proceed with scheduling my first prenatal appointment.

At this time, my emotions were all over the place and more than anything, I was nervous. And I hated that that was my first emotion, but it was. I was nervous about the timing (early pregnancy + living with friends = maybe not the most ideal situation?), I was nervous about having two kids (which is always going to be there), I was just nervous about so many major changes happening at once, and I was nervous about things I just couldn’t seem to put my finger on. I felt some pretty intense anxiety for a good week or so, until I started to relax a bit. We were fairly settled with friends by this point, and I finally had some time to really process it all. We were having a BABY!! And slowly but surely, my nerves and fear slowly started to transition to excitement and joy.

I had my first prenatal appointment towards the middle of June, and all went well. I told the doctor about some spotting that I had experienced the week prior, and she said that anytime someone experiences any spotting or heavy cramping, they like to schedule an early ultrasound. She said she really didn’t think anything of it (spotting can be fairly normal), especially since it didn’t last long. But she said she likes for patients to be reassured and not have to wait until the standard 12 week ultrasound. So although I was still feeling a little unsettled, I left on my merry way, about 7 weeks along.

As the days carried on, I couldn’t shake this nagging feeling; I felt so “normal.” I really didn’t feel pregnant. I could still drink my (mostly decaf) coffee without any aversion, and despite a few waves of nausea here and there, I felt fine. I reminded myself that I really didn’t have too much nausea with Lucas (only a few nauseous mornings and evenings in the first trimester), so I figured hey, maybe I’m just a lucky one! But something still just seemed…weird.

The day after we returned from vacation (Wednesday, July 1st) Jay and I had our ultrasound appointment. We went in, met with the x-ray tech, and told her how spot ON she was about her prediction on Lucas being “an active little guy.” She began with the normal ultrasound, but said that things were still a bit too small so she needed to do an internal one (meh…not all that fun, but I’d had them before, no biggie). She began to do the internal ultrasound, looking around, making her notes, and everything else. I saw the sac and I saw what looked like a little peanut. My little peanut. Then before I knew it, she said we were all set and that we’d be meeting in a different room with the doctor.

I thought it was kind of weird that she hadn’t really stopped to show us anything specific, and she never showed us the heartbeat. But I thought, okay, maybe it’s just because it’s so early on. So we went and waited in the other room (for about 35 minutes), attempting to make small talk about random shapes we could find in the wood grains on the door.

Finally, the doctor came in to join us. And then she delivered the news that I had prayed she wouldn’t, yet somehow had a feeling was coming. She told me that I was measuring much smaller than what should have been almost 9 weeks along at that point. And then she said that they couldn’t find a heartbeat.

She continued to go on and explain that something must have happened to cause the baby to stop developing. Then she went on to say that, although I’ve had two miscarriages (I had one right before Lucas – known as a “chemical pregnancy,” but I never shared it), she wasn’t too concerned about my ability to have another child because I had a successful pregnancy with Lucas.

From there, she proceeded to tell me what my options were for my current situation. I could wait it out, and let the miscarriage complete itself naturally; I could take something to induce the passing, so I could plan on being home for it; or I could schedule a D&C to have it removed as soon as possible. This is when things finally started to sink in and my first reaction was that I just wanted it out…the thought of having something inside of me that was no longer living tore me apart. And I just wanted it over with.

I asked the doctor if she was totally sure, and she said she was fairly certain but that we could always do some blood work to see where my levels were at to confirm. I got the blood work done that day and found out on Thursday that her assumptions were correct: I lost the baby.

So today, I have my D&C scheduled.

And I debated on whether or not I wanted to share this here, because it is a deeply personal thing. But I also feel like I couldn’t keep blogging regularly without acknowledging it. So I share this with you today, not only because I like to share the bad with the good, but also because writing this all out has been more therapeutic than I could have realized.

I’ve had just over a week to process all of this now, and although I have good days and bad, I’m finally starting to get to a place where I’m okay. It’s amazing just how devastating it can feel to lose something you never had the chance to meet. But I’m trying to remind myself that this was His way of telling us that it just wasn’t the right time. And maybe He’s right.

I know it will still take some time to heal from it all, but we’re doing okay. Plus, I’ve got my sweet little Lucas to keep reminding me just how precious life is, and how lucky I am to have him.