So I’m pretty sure my ears are still ringing from last night. Woweeee!

But despite the fact that I’m still having a hard time hearing, it was all totally worth it for Mal’s bachelorette party. 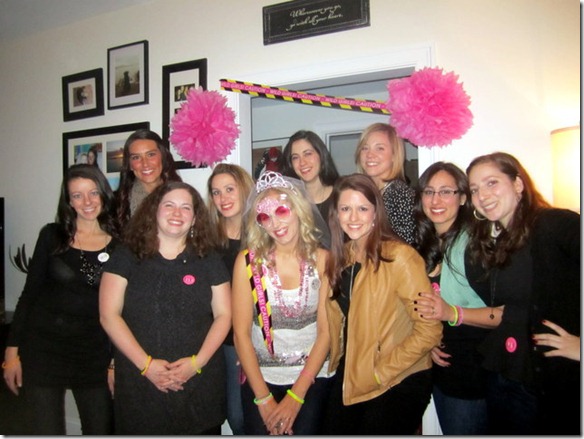 Late yesterday afternoon, we arrived up at my cousin’s apartment to set up for the evening’s festivities. Of course, we had plenty of food to snack on, including some pizza that arrived a little later as well. 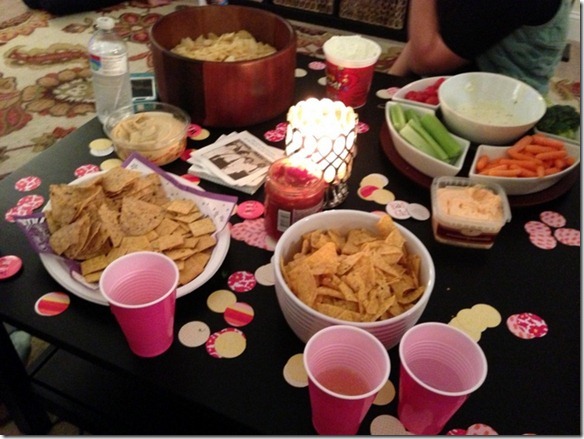 We all had some fun playing a few games with Mal, including a game that involved Brian (the groom-to-be) to answer a questionnaire ahead of time. We then asked Mal to answer all of the questions and every time she got one wrong, she had to drink.

FYI: It’s also a super fun game to play at a wedding shower, which we did at mine forever ago. Instead of taking a drink for every wrong question, I had to chew a new piece of gum. It’s so funny.

Mal, of course, being the rock star fiancé that she is, was killing it at the questions. 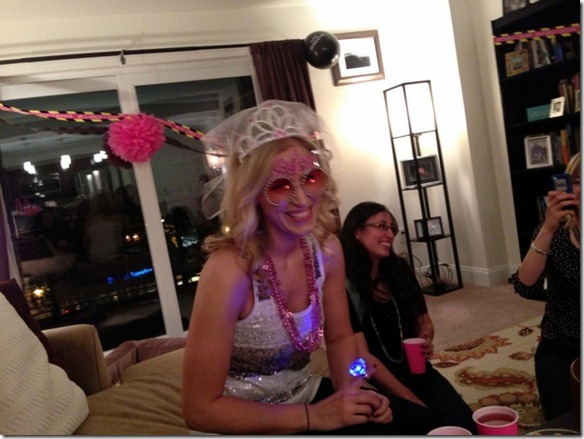 I guess those two really are meant to be.

The evening also involved some apples to apples (“drinking edition”) which I more than happily took part in with my water. 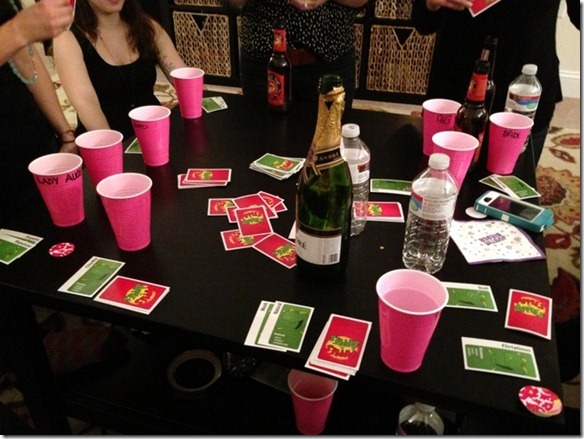 And then a little while later, we had cake… 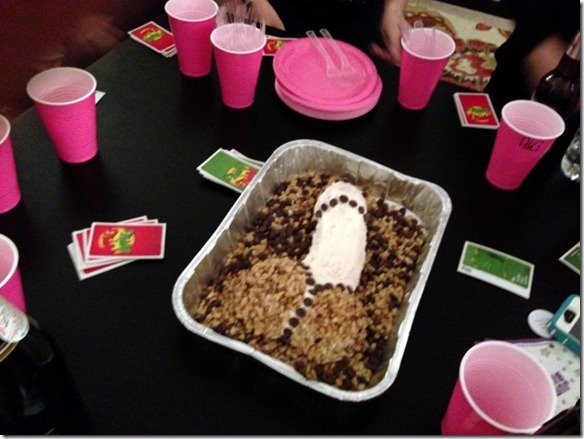 Baking and decorating skills courtesy of Sarah herself.

There were no plates needed for that bad boy…everyone just dug right in with their forks. 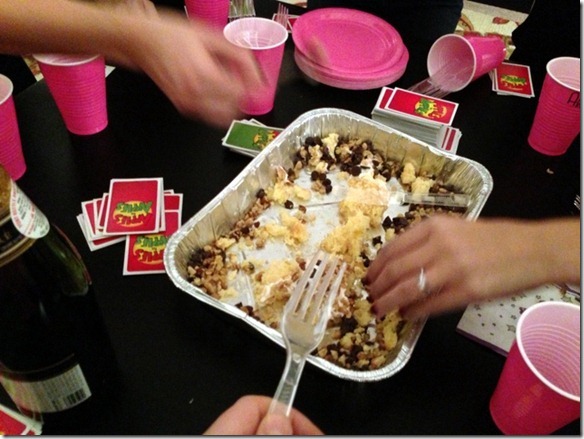 Around 10pm-ish (I think?) we left the apartment and headed out to a couple bars in downtown Saratoga to really get the party started!

Here’s me with all of my beautiful cousins (all Jay’s, but really, they’re mine too…even though they’re more like friends). 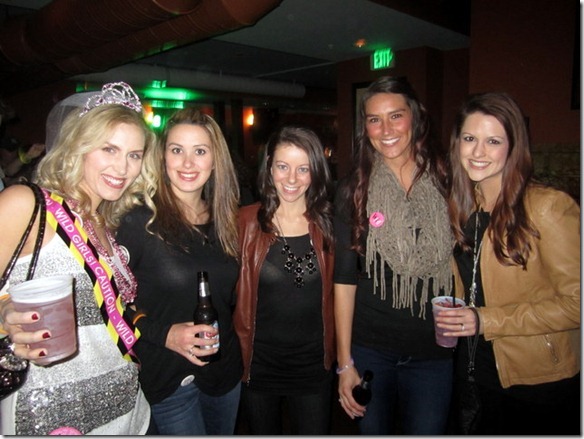 You guys know Mal, Denise, and Sarah, but I don’t think you’ve “met” Meg yet. They’re all a blast and I love ‘em all to pieces.

As for my beverages of choice for the evening? I started out with some sort of fruity concoction, seen above, which was really tasty (heavy on the pineapple – yum) but a little too sweet to continue for the whole evening. So I just stuck with water…a lot of water.

The whole crew! (plus a way cool creeper in the background) 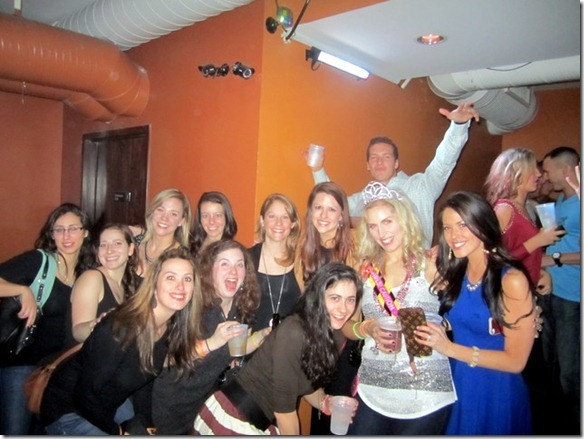 We ended up going to another bar after this one, which was a lot more crowded and definitely a LOT louder (hence my ringing ears today) but I think everyone was having a great time. We kept out dancing shoes moving until a little after 1:00am, before finally calling it a night. SO much fun!

This morning, I slept in for a bit (and loved the fact that I didn’t have to worry about a hangover!) and made breakfast shortly after waking. 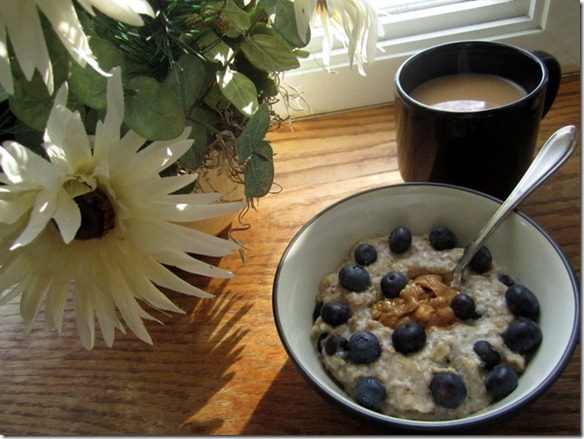 Breakfast of choice today was some thick, creamy, stovetop oatmeal mixed with blueberries and topped with a big scoop of crunchy peanut butter. 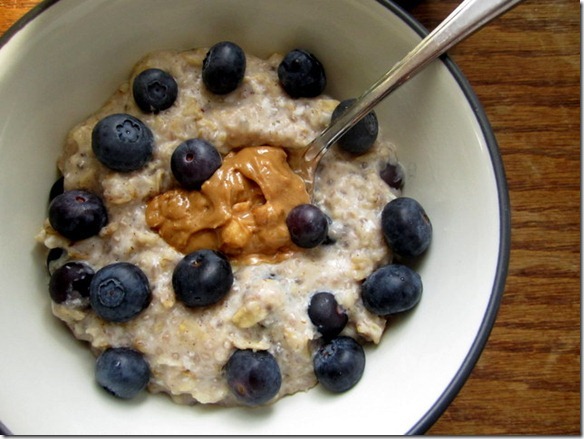 I’m taking today off from working out (my legs got enough of a workout last night!) and am now trying to decide what I want to make to bring to the Super Bowl party we’re headed to later this afternoon. I have quite a few choices I’m going back and forth with on my Sweet Treats Pinterest board…we’ll have to see what I can come up with!

Do you have any big plans for the Super Bowl today? Making anything yummy??