Happy Monday to you all! I’m loving today not only because I have the day off from work for President’s Day, but also because I’m coming off from another great weekend with my favorite people ever.

On Friday night, Jay and I enjoyed a fabulous dinner out at Bonefish Grill.

I was recently invited to visit our nearest location here in Albany, to try out their new In + On Bar Bites menu. 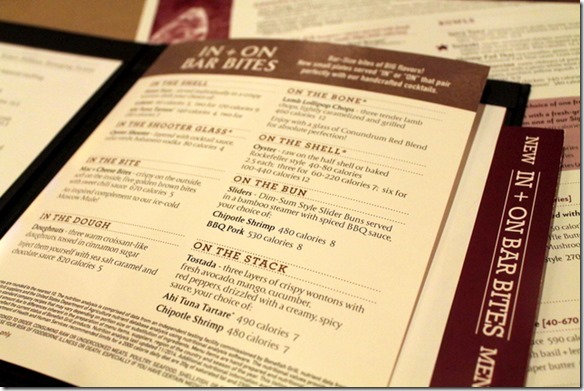 *I was provided a gift card to use during our visit, which covered about 3/4 of our bill.

The menu boasts all sort of fun appetizers and small plates but, first things first, we needed a round of drinks. The last time we visited, I was convinced to try their seasonal martini and, once again, I found myself ordering the same. But this time, it was their Winter White Cosmopolitan. 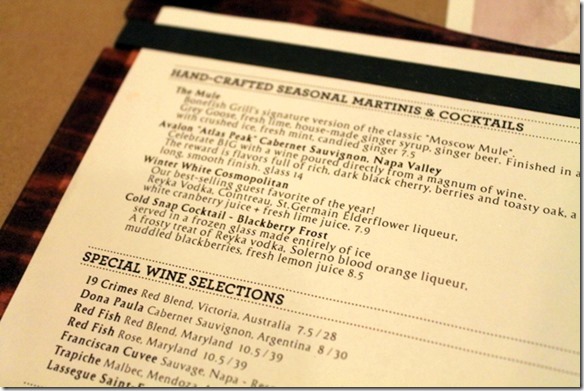 I’m starting to wonder if maybe I really can’t say “I’m not a martini/cosmo drinker” anymore because I’m now two for two with falling in love with their drinks. SO good. 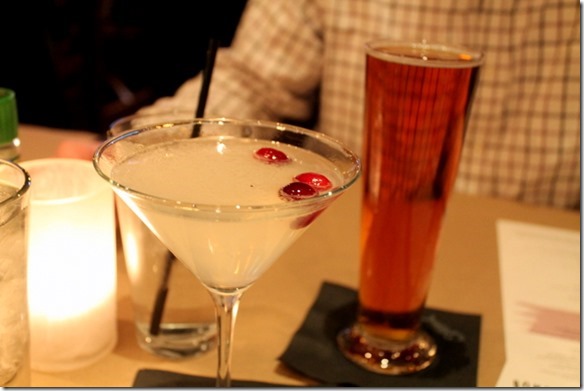 Once we had our drinks, Jay and I browsed over the In + On Bar Bites menu and decided to try three different ones. 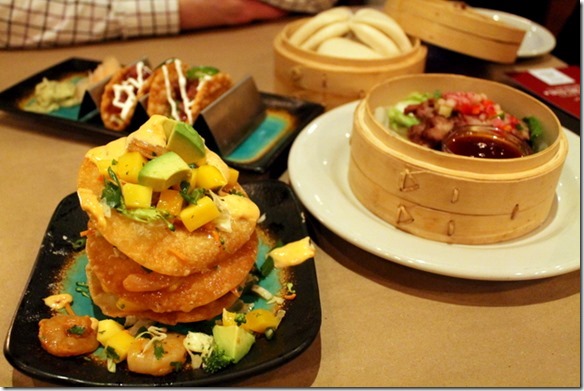 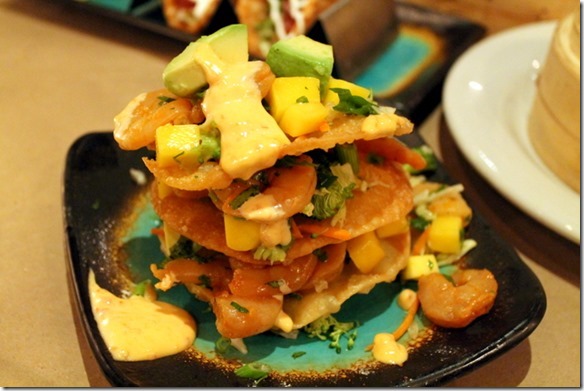 The flavor on those was absolutely incredible and I felt like I probably could have had about 20 more.

Next were the IN the Shell: Street Tacos, which come served individually in a crispy wonton shell, with a choice of Lobster or Ahi Tuna Tartare. We opted for two of the tuna tacos and, once again, absolutely delicious. 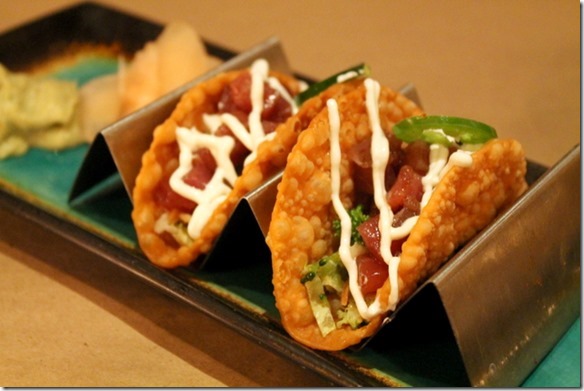 We also thought it was pretty cool that you can order them individually, so you don’t wind up with too much or not enough when in a group or something like that. The tuna was super fresh, and the flavors all just came together really nicely. 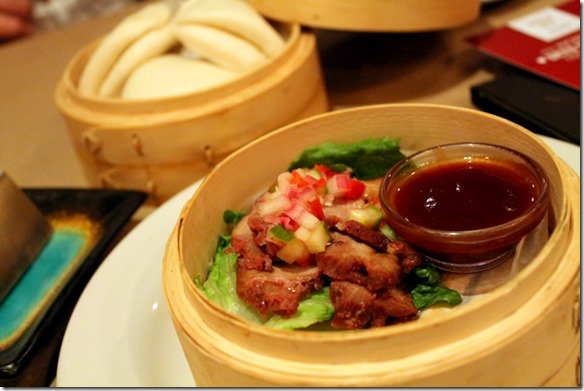 We opted for the BBQ Pork and while these were good, we both definitely agreed that there needed to be more pork. The slider buns were very overpowering with the small amount of pork that you get in the order, but other than that, flavors were still great.

By the time we finished our appetizers and first round of drinks, we ordered a second round of drinks (another beer for Jay, and a blackberry sangria for me which was good, but tasted a lot like grape juice) and we had to decide if we wanted to keep ordering small plates, or actually have a full dinner. 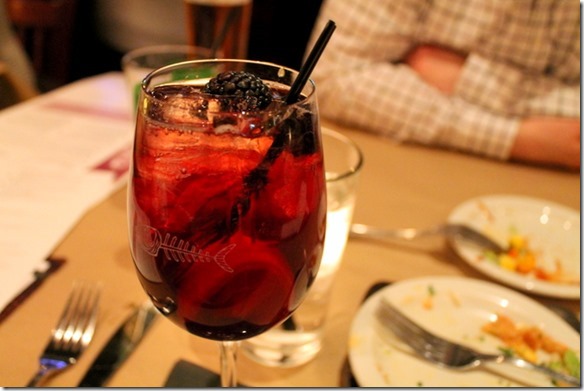 Ultimately, we decided that a full dinner would probably be in our best interest. So we were served some of their delicious bread and pesto dipping oil and snacked on that while we waited for our dinners to arrive. 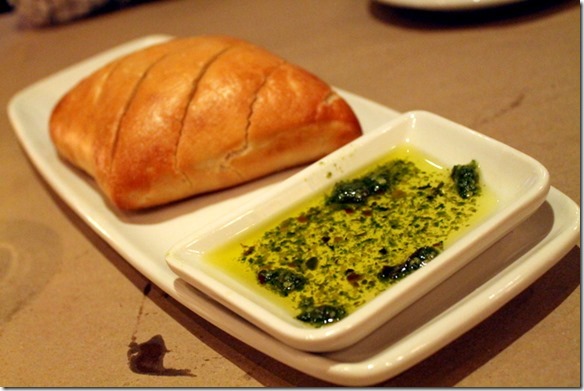 For my dinner, I opted for one of their specials, the Mahi Mahi which was topped with lobster and crab meat… 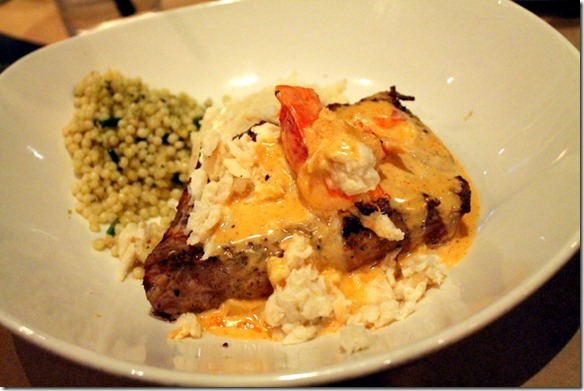 Both of us left in full agreement that Bonefish Grill really does have some incredibly fresh fish and some amazing dishes. We have yet to have a bad experience there and have no doubt we’ll be back again! Thanks again, Bonefish Grill!

By the time we left dinner, we thought we actually still had room for dessert, so we went around the corner to Lemondrop for some frozen yogurt (yes, it was about zero degrees outside). 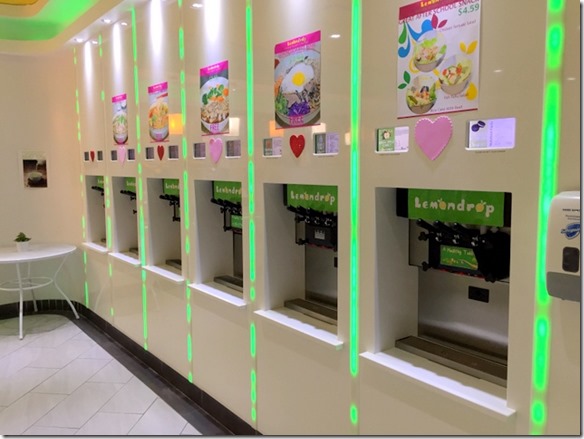 They have so many toppings…I absolutely LOVE it there. 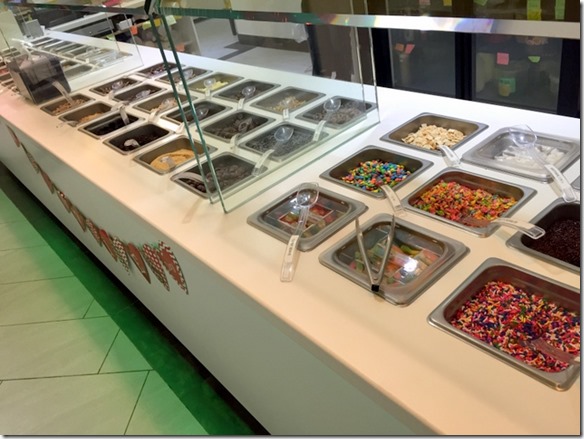 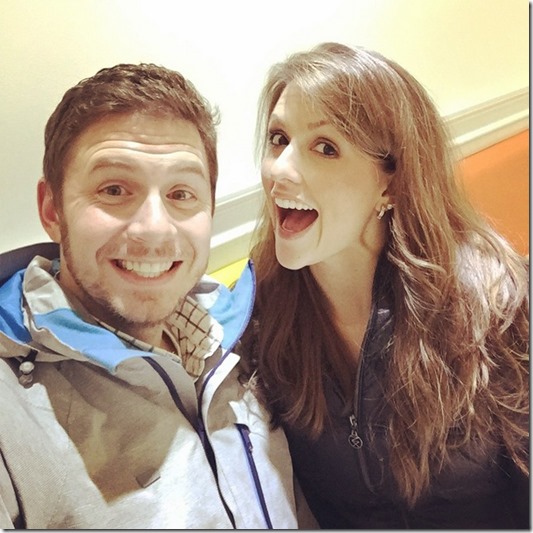 We both got decent sized cups, finished every last bite, and then about 10 minutes later while driving home, realized just how totally STUFFED we were. Oooof.

It had been a long time since I’d felt that full and I actually couldn’t even lay down right away going to bed that night because I was so uncomfortable. Ay yi yi!

Thankfully, by the time I woke up on Saturday, everything was a-okay. Being that it was Valentine’s Day and all, I decided to make Lucas some heart-shaped pancakes. 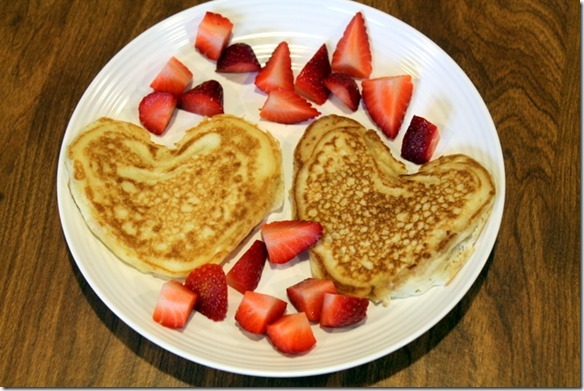 And imagine my surprise when he actually ate them. You never know around here, these days!

I also got a little festive with some Limited Edition Love O’s from Love Grown Foods. 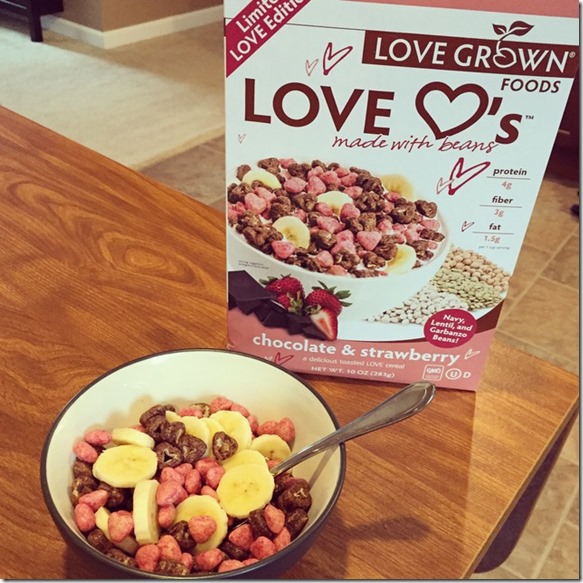 Saturday included some errands, a great workout, a killer 3-1/2 hour nap from my little heartbreaker, and a visit from my parents. 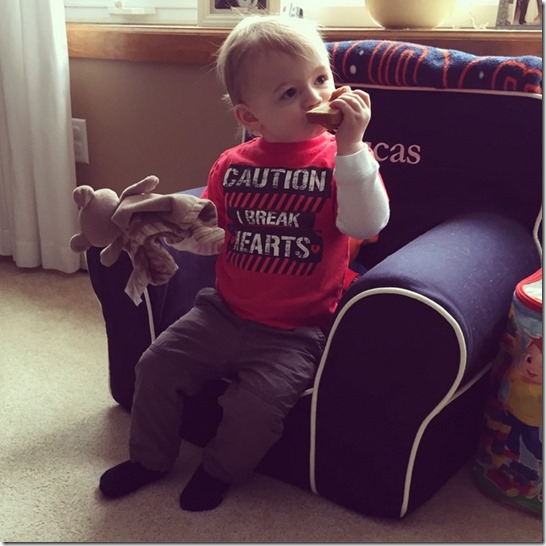 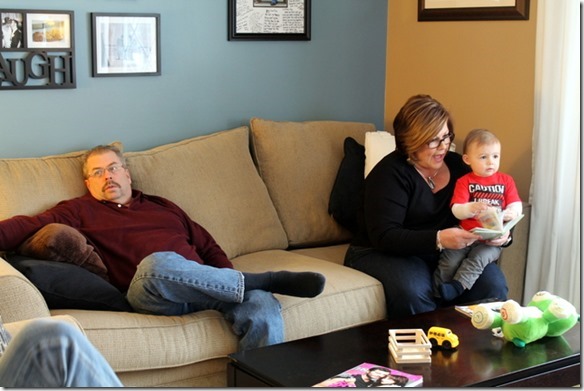 As our way of “celebrating” the Valentine’s Day holiday, we ordered in some Testo’s for dinner, and I totally went away from my usual order and decided to get their Chicken and Broccoli Alfredo. 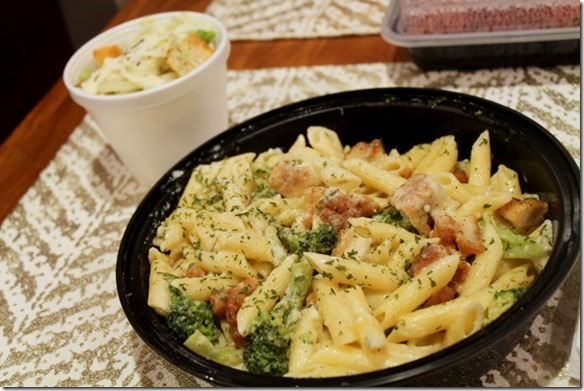 I don’t typically order alfredo, but it was definitely worth the splurge…and huge! I have lots of leftovers, that’s for sure.

Of course, you can’t have Valentine’s Day without the dessert, and I ended up making a batch of homemade fudgy Heath bar brownies. 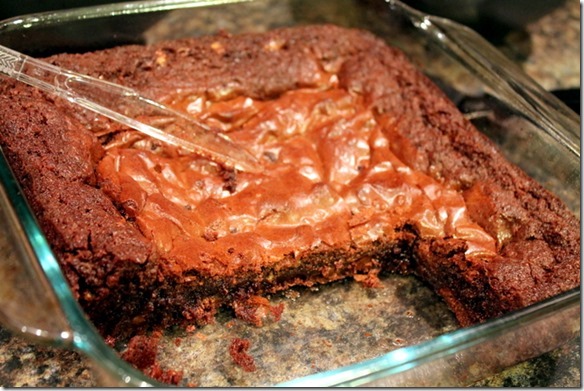 Which got topped with French vanilla ice cream and caramel. 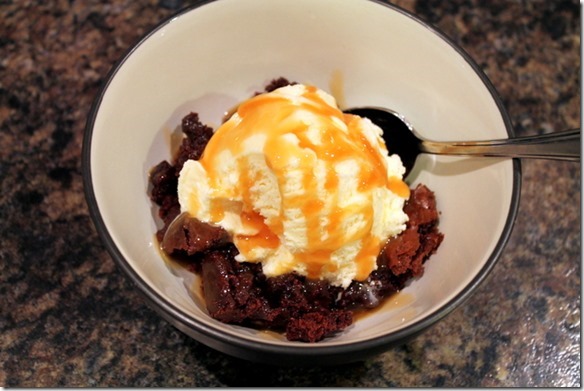 Seriously…I wasn’t kidding about the amount of delicious, decadent food that was had this weekend. And I used this recipe as a guide for the brownies, but omitted the caramel sauce and added about 1/2 cup each chocolate chips and Heath bits. They baked a little funky looking, but they tasted incredible.

Sunday was a great, low-key day that included MORE friggin’ snow (I think we got another 8-9 inches last night)… 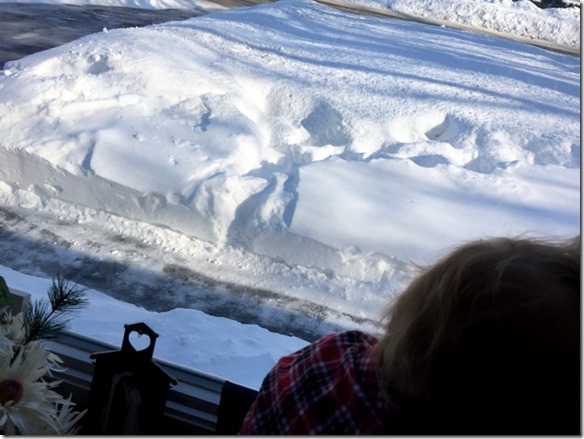 Some cleaning, some quick grocery shopping in the frigid temps, a little vanilla chai tea latte to warm myself back up… 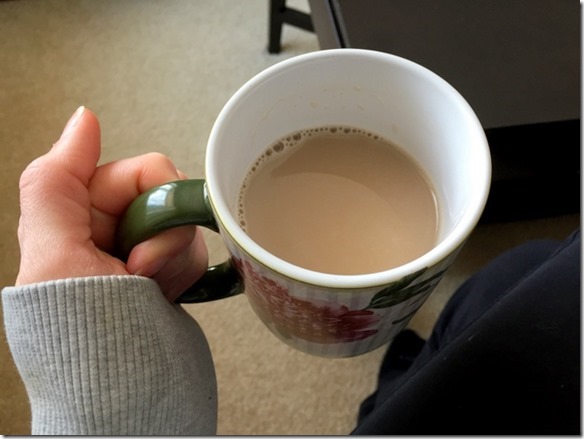 Some playing and mess making… 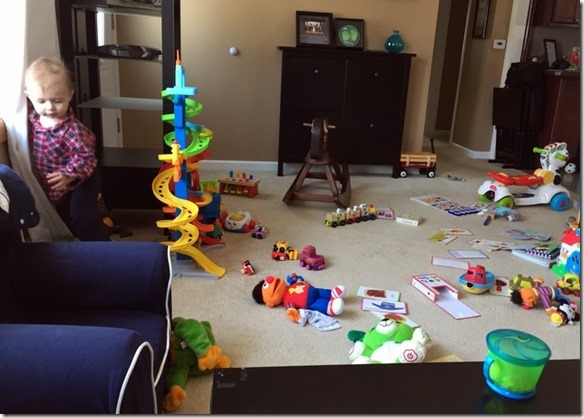 And lots and lots of laughs thanks to this little character.

He had the two of us cracking up all day and, I swear, his personality has just been SO much fun lately! 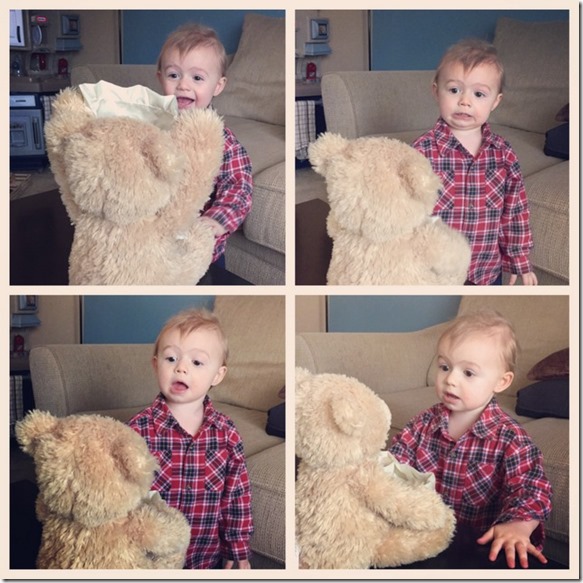 He’s starting to imitate us more (mental notes have been made here!), chatter more, test his limits more (ohh, that’s for sure!), help around the house, and has even been extra lovey with lots of hugs and kisses. I’m so excited to be able to have today day off from work so I can hang out with him ALL day!

Now that I’ve talked your ear off…how was your weekend?? What was the best thing YOU ate?