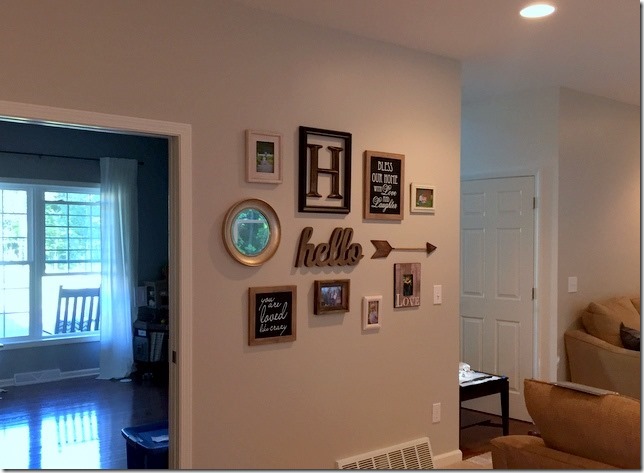 When we first moved into our house, I had the idea to put up a gallery wall somewhere in the house. I just couldn’t figure out where. And then one day, as I was looking around the living room/kitchen area, I had a vision for a gallery wall…and from that point on, I couldn’t get it out of my head. 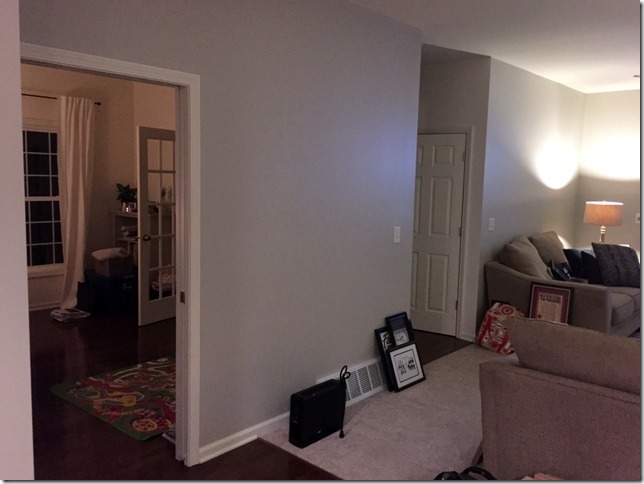 For a couple of weeks, I took some time browsing around stores trying to find what I could put together. I originally came across these two signs at HomeGoods and used those as my starting point. Then shortly after obtaining those, I found myself in Hobby Lobby with my arms full of things I hoped would work together. I figured, okay, I’ll buy them all now, and then I’ll just go ahead and return whatever I think won’t work.

And wouldn’t you know…I didn’t return any of them.

*Tip: Look for their 40% off coupons! You can’t use more than one in a trip, but if you’re patient, you can always save up and keep going back!

So now I thought the hard part was over. I mean, once you’ve got everything you need to hang, you just put it all together and, well, hang it, right?

Wrong. Oh so wrong (at least for me).

I second/third/fourth guessed just about every arrangement that I put together. I’d think I had “the one,” and then something would throw me off and it just didn’t work. I had so many different iterations of it, I was honestly starting to lose track. 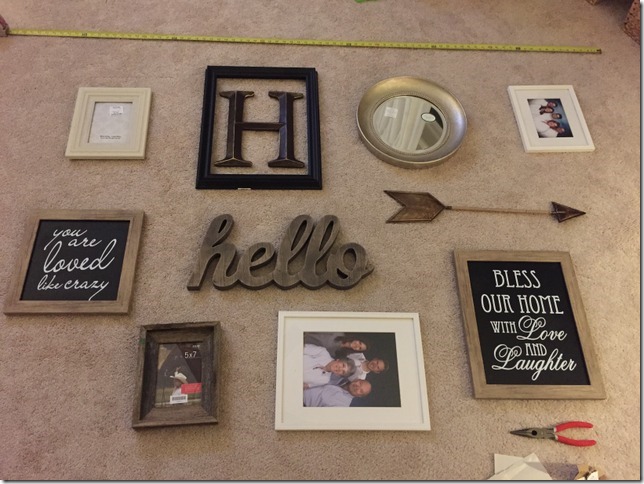 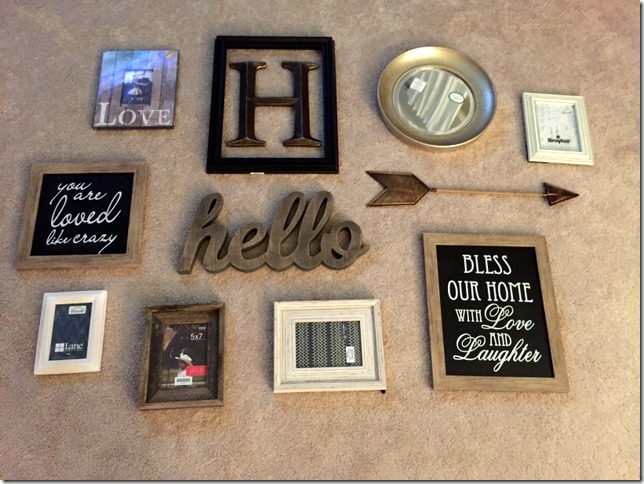 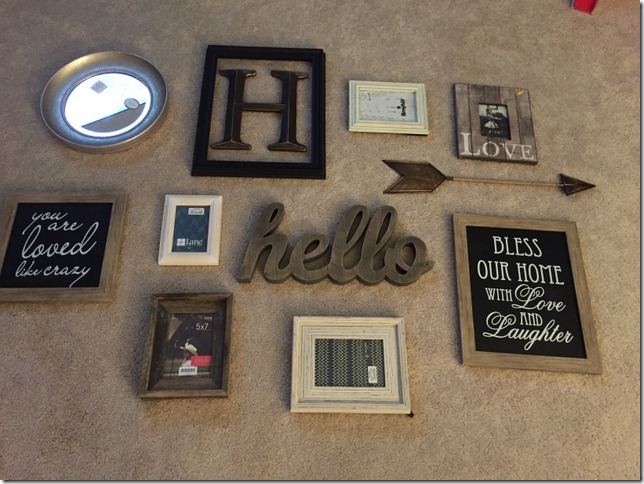 I texted my friends numerous times too, with a number of arrangements (oh, you girls are wonderful), and they were quite helpful with providing some tips and suggestions. 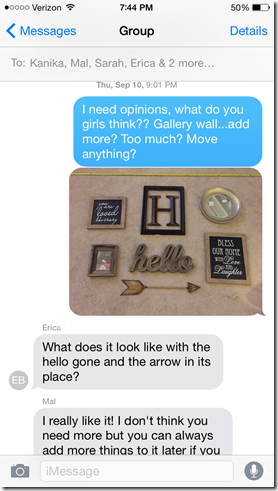 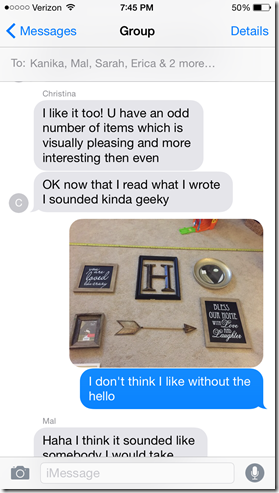 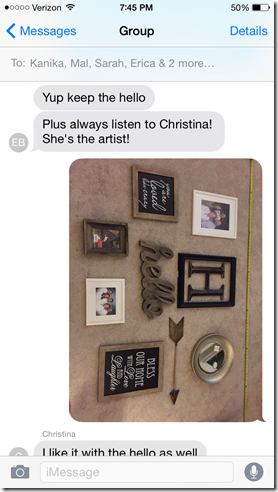 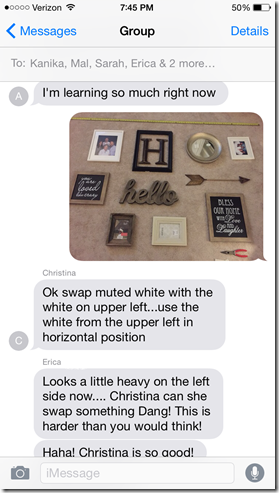 Eventually, I wound up trying to use all of their tips and finally came to an arrangement that I not only liked…I loved it. 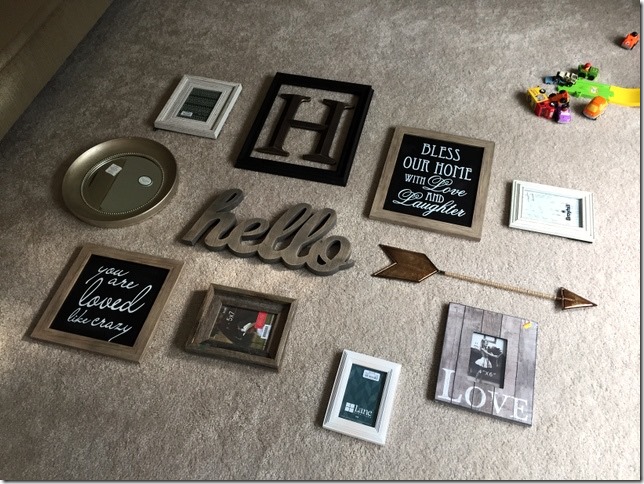 So once I had my arrangement decided on, the next step was figuring out how to properly space them on the wall. To do so, I actually used the paper that all of the items came wrapped in from the store, traced them out, and used painters tape to place them approximately where I wanted them on the wall. 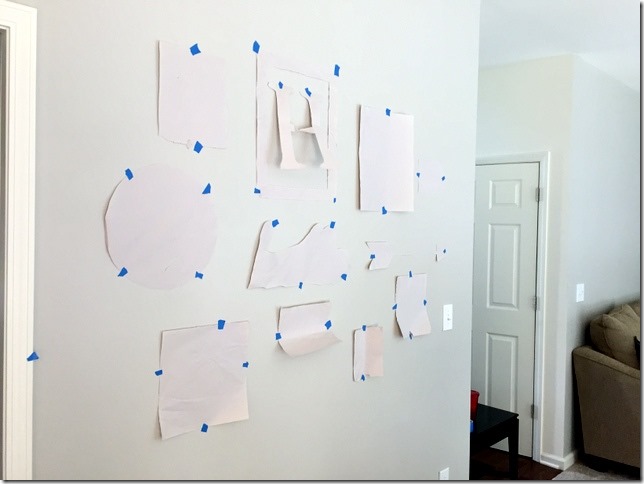 This made it nice and easy to move them around, as needed (which certainly happened, numerous times). 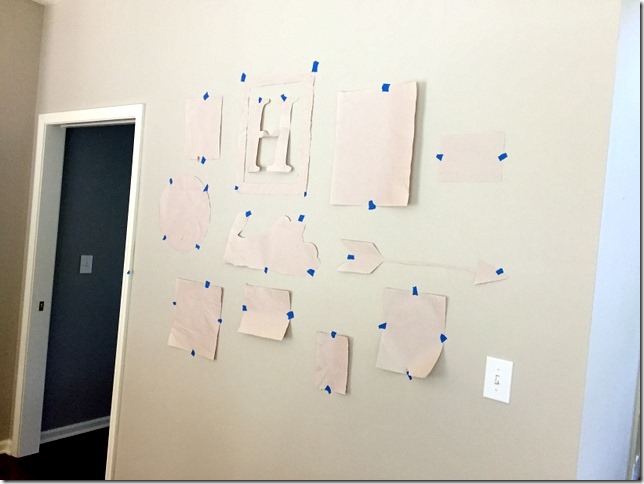 Once I figured out where I wanted them on the wall (centered, at the right height, all that jazz), it was time to hang. And this is where my wonderful husband really came in handy!

We decided to hang the center-most item first – that way, we could work from the middle outward. Whether or not that’s the “best” or “right” way to do it, I have no idea. But it worked for us.

Some of the items were harder to hang than others – specifically, that “hello” sign, because that really needed to be level. Eventually, we ended up using a crazy method of using another piece of paper on the back of the sign, poking through the holes where the nails would go, tracing around the edge, and then marking those holes out on the existing paper on the wall. Ya got all that? It was a bit tedious, but it seemed to do the trick (despite the fact that the holes in the sign weren’t level, which threw us for a bit of a loop). 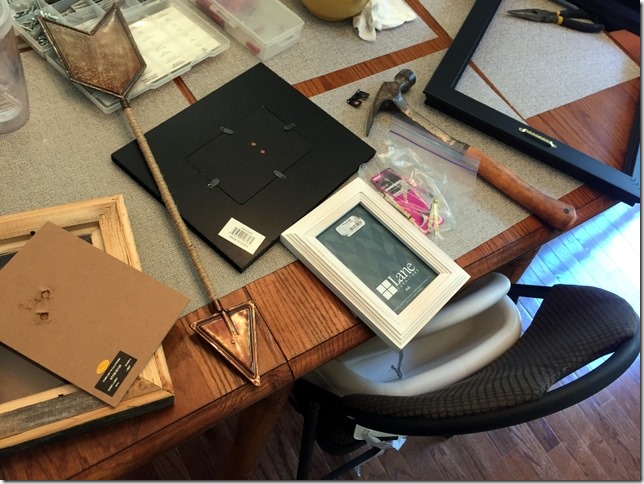 I also discovered as we were midway through that about 3 of the frames I bought didn’t have any hardware on the back to hang them (go figure?!). Luckily, I had purchased a small box of them at Hobby Lobby for $1.99 for a different picture we needed to hang, so we were easily able to hammer them into the back. Those frames also needed to have the stands ripped off so they’d lay flush against the wall.

About an hour later, of measuring, leveling, and double checking everything, we eventually had our completed gallery wall…and I am in LOVE! 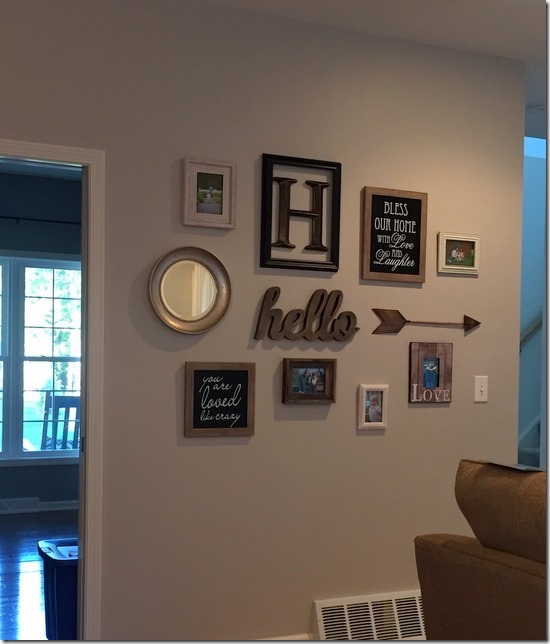 All of the items on the wall either came from HomeGoods, Hobby Lobby, or craft shows: 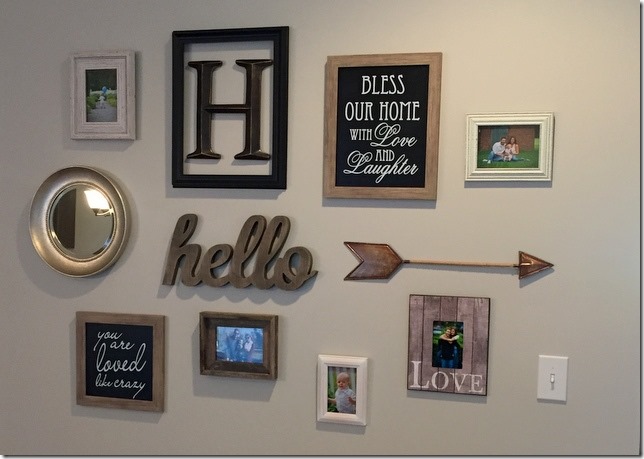 After seeing how much love the picture got on Instagram, I knew I’d have to share it with you guys, so there you have it! I hope to be able to create some more of them around the house eventually now, too. I think I’m hooked!

How about you guys? Have you ever tried a gallery wall?

« Festival Fun and House Projects Completed
This or That, 2nd Edition »