Welcome to Monday my friends! I hope everyone’s work week has started off on the right foot. I have been on the go most of the day, running errands, running the washer, running lists, running my legs…you get the point. ;)

I was actually craving cereal for dinner last night, but changed my mind last minute to get in some needed veggies. The cravings were still there this morning, which made my bowl that much better. 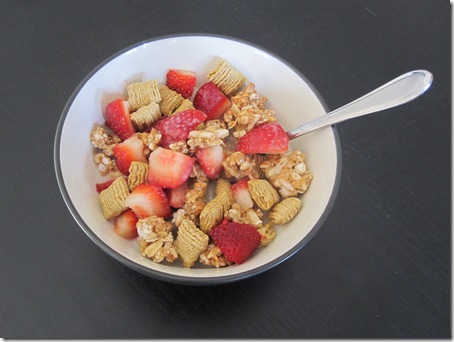 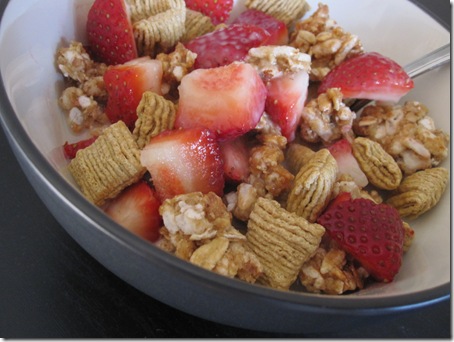 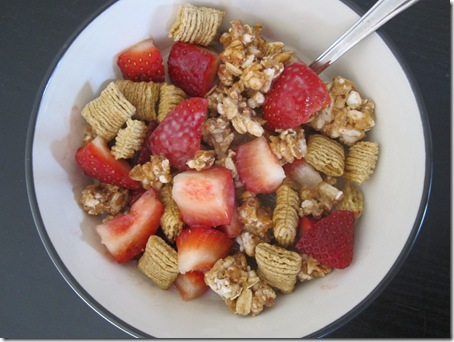 Mid-morning, I also snacked on 2 Banana Oatmeal Chocolate Chip cookies. They were in my car with me, which got the chocolate chips just the slightest bit melty. I think I may have announced “These are sooooo good” at least twice while driving…by myself…with the window down. ;)

By the time I got home, I finally decided I was in the mood for a short run. My body is actually pretty sore from yesterday’s Hot Yoga, and I was originally planning on taking the day off, but I knew I’d feel better if I at least attempted something. I laced up my running shoes and hit the pavement for a 2.5 mile run. It was short, but it was hot and humid out, and I felt like I probably would have collapsed if I went any farther. I’m still trying to adjust to running outdoors, (ever since our treadmill became out of commission) so it’s still a challenge for me. But hey, I like a challenge. ;)

But I was actually so overheated that as soon as I approached my driveway, I continued running straight into our backyard, threw off the shoes & iPod, and jumped right into the pool! Clothes and all, cannonball style. It was probably the most refreshing swim I have had all summer long. It was fantastic. 8-)

Since lunch time ended up being much later than normal, and I have a 5:00 dinner date with my friend Heather, I kept things on the lighter side.

I snacked on some unphotographed celery sticks, while I got together a vanilla flavored Chobani yogurt… 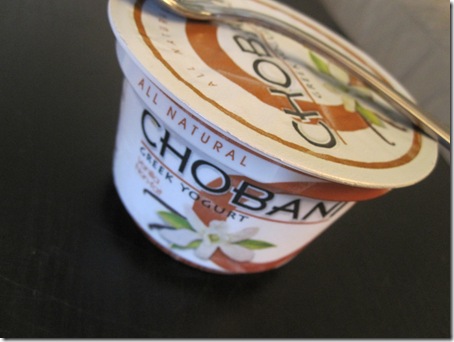 …and a sliced apple + Kashi crackers with 2 tbsp. PB2. 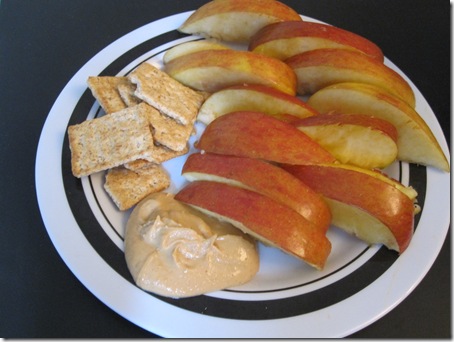 I absolutely LOVE the fact that I can have this huge hunk-o-PB for only 45 calories. It’s just miraculous. And utterly delicious. :) 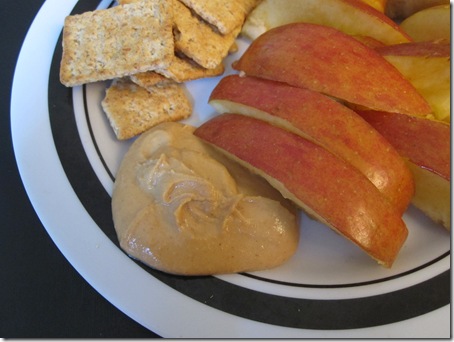 Don’t be surprised if I go back for another Banana Oatmeal Chocolate Chip cookie. There’s only 3 left! :shock:

I cannot believe that I am going to be traveling to Chicago THIS THURSDAY for the Healthy Living Summit!! It feels like just yesterday I was sitting at my computer screen like an eager contestant on Jeopardy ready to “buzz in” at the exact right time. :) I am so ridiculously excited! I feel the way I used to when my family and I had a vacation to the beach planned. I would have my lists ready, bags packed, and that giddy excitement all week long. Now, I still have all the giddy excitement, but I still have to work on those lists and the packing. Hey, at least it’s a start. ;)

What kind of a traveler are you? Do you pack way ahead, or do you wait until last minute?