Would you believe that I woke up this morning craving another savory breakfast? Seriously, what is UP with me? 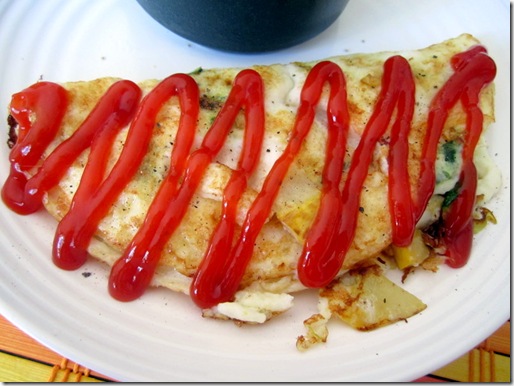 Hey, whatever the reason, I’m just gonna roll with it, because this is two savory breakfasts in a row that were totally fantastic. 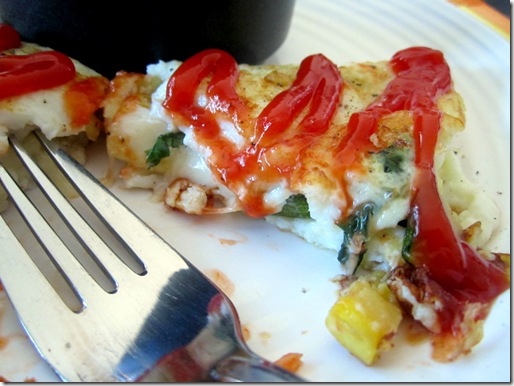 I whipped up an egg white omelet and filled it with some more grilled zucchini (a first for me, but I liked ‘em in the eggs), a slice of reduced fat provolone cheese, fresh basil, salt, pepper, and lots ‘o ketchup. 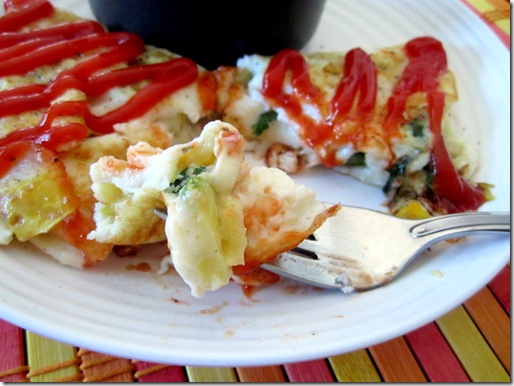 To give you an idea on the zucchini…I grilled up 4 of them last night (2 yellow, 2 green) so I have a lot of leftovers. Don’t be surprised if you see them making an appearance in my next 100 meals.

Along with the egg white omelet, I enjoyed a bowl of sweet, refreshing berries and an iced coffee. 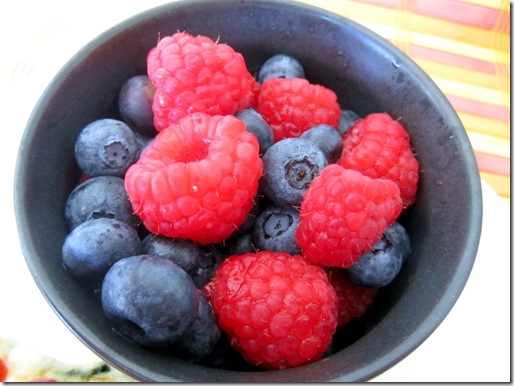 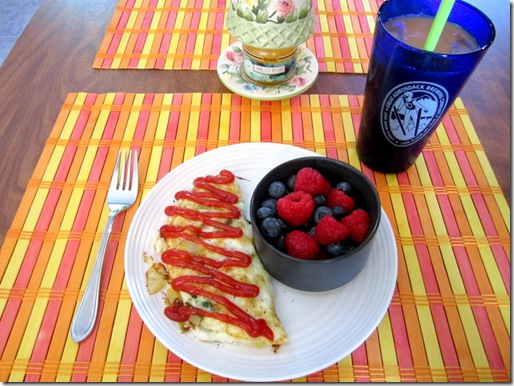 I woke up this morning pretty hungry so I decided to eat first and hold off on my workout. Once this all settles, it’s time to get crack-a-lackin’ on some HIIT and a little yoga. Speaking of workouts…

You may or may not have noticed that I haven’t exactly been following my initial training plan for the Boilermaker, and I’ve actually had a few of you ask me how it’s going. Well, as it turns out, after weighing the pros and cons of a few different situations, I’ve actually decided not to run the race.

Luckily, I didn’t lose out entirely on my race entry and was able to defer it to 2012. So come next year, I know that Tina and I will be ready to rock and roll!

It was a really difficult decision to make, as I was really working hard toward the beginning of my training. But to be perfectly honest, my biggest reason for deciding not to run the race is because I would have missed out on the first half of the vacation I’m set to go on this Friday.

Jay, my parents, and I are heading down to the beach Friday evening, and if I had decided to stay to run the race on Sunday, I would have a) had to drive down in a separate car, and b) missed out on half of a vacation that I am really looking forward to.

Some people might call me a quitter…and maybe in some ways I am. Call it what you wish. But I am totally, 100% okay with the decision I’ve made. As much as I enjoyed the sense of accomplishment that I felt after running my last 10K, I’ve never been overly excited to run a race. Sure, it’s fun, and I’m not opposed to them by any means; but it’s just not a huge passion of mine like it is for so many others.

Being a part of the healthy living community, I am surrounded by strong, athletic, and admirable women who are so completely passionate about running and racing. To those of you who fall into this category, I give you many props; running and training for a race is not easy (at least for me!).

Initially, I was worried that if I didn’t run the race, then it would make me less of a runner/person/athlete. But the more I thought about it, I realized just how silly I was being. What defines me as a runner/person/athlete is not what race I run (or don’t run, for that matter). It’s so much more than that…attitude, perseverance, and just trying to be the best I can be.

And I’m totally cool with that.

Have you ever opted out of a race (or any event) for personal reasons? Did you regret it or were you okay with your decision?