Hey hey! How’s everyone doing today? I’m excited because I took some pictures for once over the weekend, so I actually have a bit more to share with you all this morning. It was a really, really great weekend for no special reasons other than I got to spend it all with family, which is what I look forward to all week long. 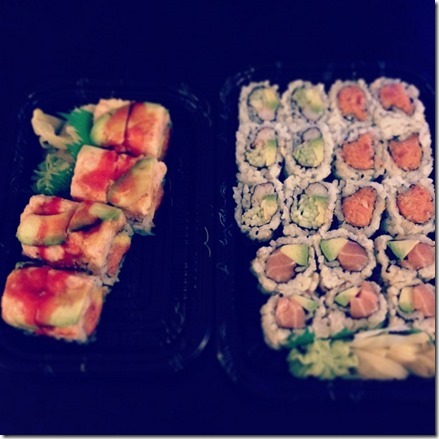 We shared one of their specialty roles (for the locals, the Siena roll is AMAZING) and then I had a salmon/avocado and half of a California roll.

While Jay was out picking up our dinner, he also happened to pick up some dessert from Stewart’s for us, too. Ohh, he’s such a smart man. 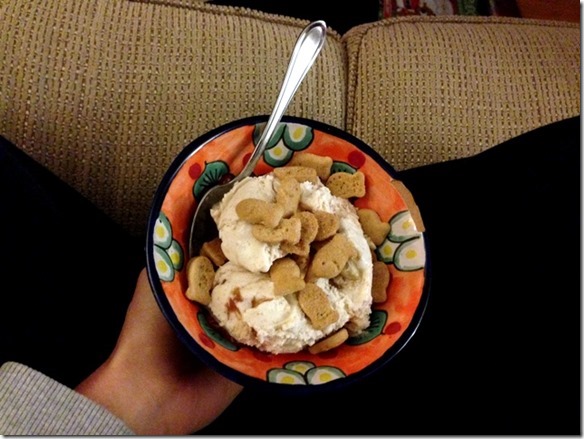 They had hand packed pints on sale so he picked up a pint of their Philly Apple Pie for me (OMG it’s freakin’ amazing) and I topped it off with some vanilla cupcake flavored Goldfish. (How they managed to get in my shopping cart recently, I just do not know. But I DO know  that Jamie would approve of this snack).

I’m pretty sure I was asleep before 10pm Friday night, and then we were up and at ‘em nice and early on Saturday. Granted, we’re always up nice and early, but we’re never usually “presentable” or ready for the day until at least noon. But we were out the door late in the morning to head to a birthday party for one of our cousins’ son.

It was a Mickey Mouse theme…and I just about died over those ears. 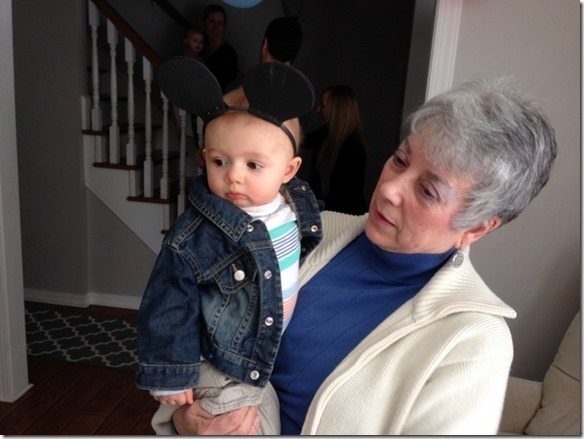 While we were there we all had some snacks to eat, and Lucas even tried out some pieces of a homemade carrot applesauce muffin. I’d be surprised if he managed to get more than five pieces actually in his mouth, but it was good practice. 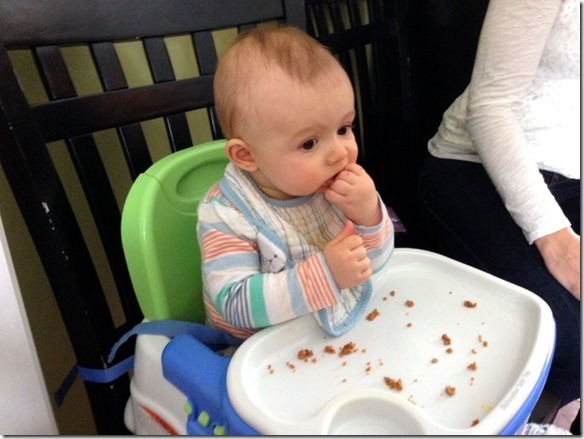 The party tuckered all of us out and concluded right around this guy’s nap time, so we packed it up and hit the road back home. 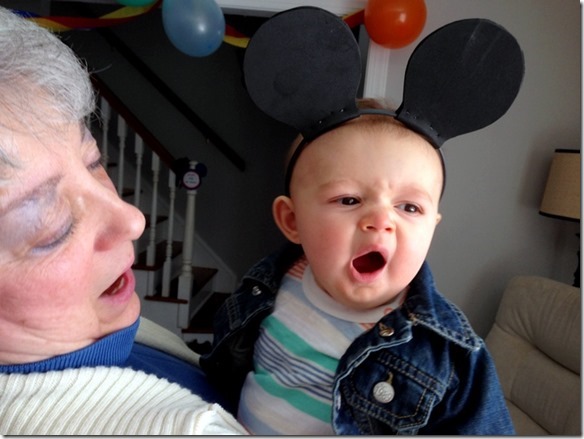 Lucas continued napping once we got home, so mommy and daddy took advantage of the down time and decided to close our eyes too… 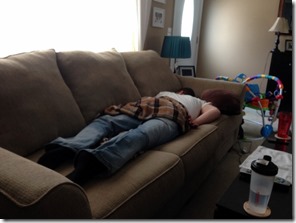 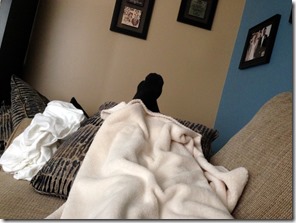 Which turned into an hour and a half afternoon nap for all of us. Ohh, how I wish I could do that more often.

Saturday evening was spent with all of my boys. There was some more practice with finger foods… 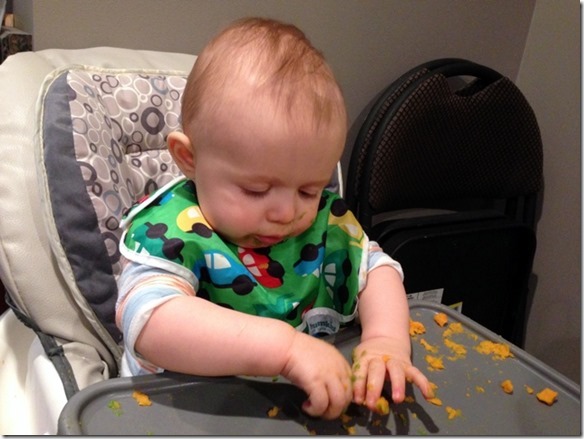 Sweet potatoes for everyone (ours were topped with some chili, melted cheese, and avocado…heck yes)… 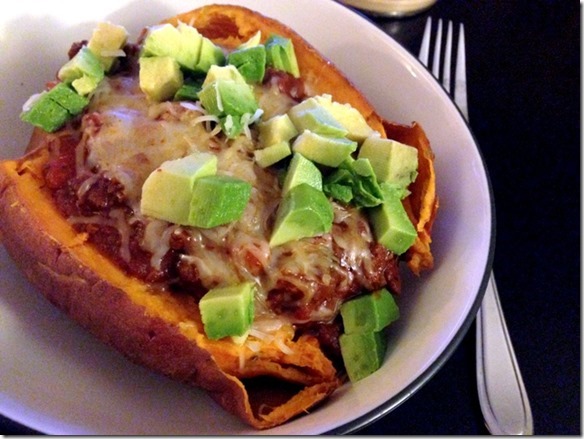 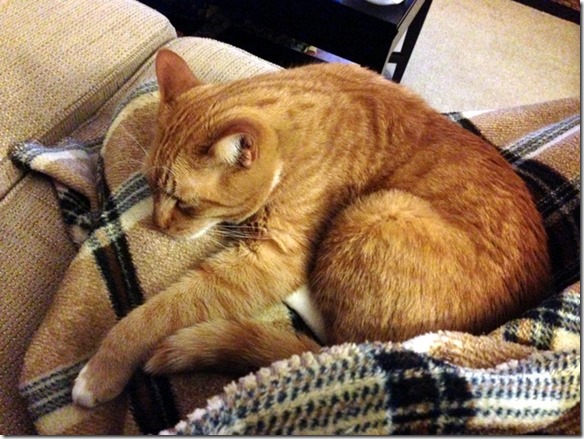 And another early bedtime.

Sunday started off a bit later than usual (although, technically, not really) thanks to daylight savings time. We had a lazy morning, as usual, and sipped on some coffee while playing with the babe.

Once he was down for his nap, Jay made me breakfast, which was an egg sandwich with provolone and turkey bacon on a sandwich thin. Ohh, it was so so good. 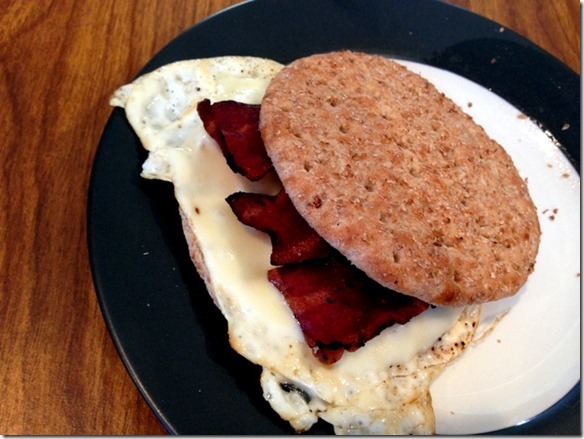 And shortly after breakfast digested, it was time for a workout. I recently downloaded the Nike Training Club app after Chelsey told me how wicked (awesome) of a workout it was. 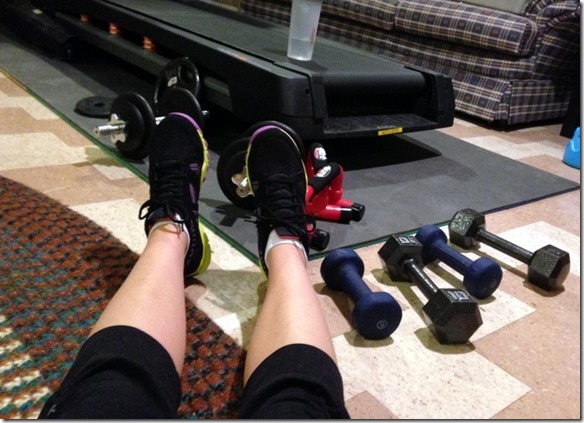 Well ho-leee crap, she wasn’t kidding. I did my first workout on Friday and attempted my second on Sunday and all I can say is…wow.

Obviously, as you can tell, I have some workout ADD these days and I’m not really following any specific type of a plan (running, T25, Nike Training Club app). This is pretty typical of me…I just like to roll with what I’m in the mood for. We’ll see how long I stick with the NTC app but I will say that, for now, it’s freakin’ awesome.

After a quick grocery shop Sunday afternoon, the three of us were out the door again to head to my parents’ house for an early dinner. Mom said she was making a full turkey dinner with all fixins’, so there was no way we could miss out on that. 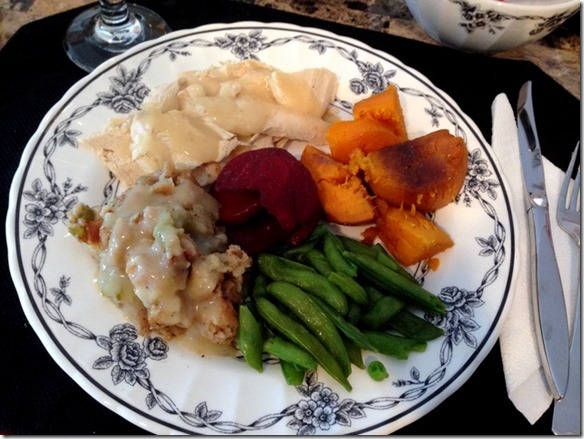 Of course, grandma and grandpa were thrilled to have some QT with their favorite (only) grandson. 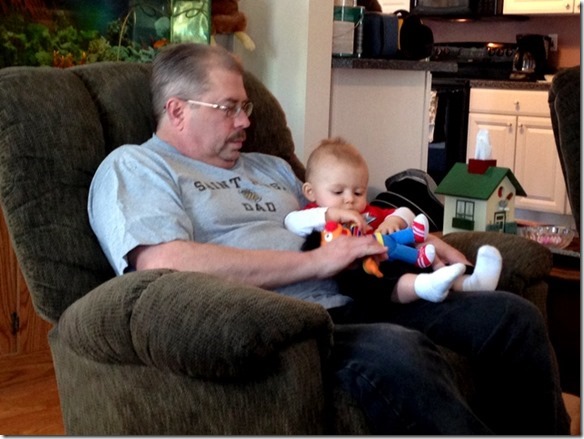 And that pretty much sums up our weekend!

So now, here we are back at Monday once again. Here’s to hoping it’s a quick, productive, and fun week ahead!