Things have been fairly quiet and uneventful for me this week, so I honestly just haven’t had all that much to talk about. I was actually just chatting with Chelsey about this, and we both agreed that hey, it happens. It’s okay to lead boring lives once in a while…in fact, it’s kinda not too shabby. That just means that the blog might be a little mellow in the meantime…but I’m sure life will spice back up again sooner or later.

Alright, so let’s see…what’s been happening on the food and fitness front? Well, fitness has been happening, so I can’t complain about that. So far this week I’ve gotten in a good treadmill walk and and a 30 minute Pilates session. Tonight after work, I’m planning on doing another circuit workout (which I failed to get up early enough for this morning) so we’ll see how that goes.

As for food? There’s been some good stuff, but I guess nothing really all that earth-shattering. Plenty of the usuals, with cereal being a new favorite breakfast item. 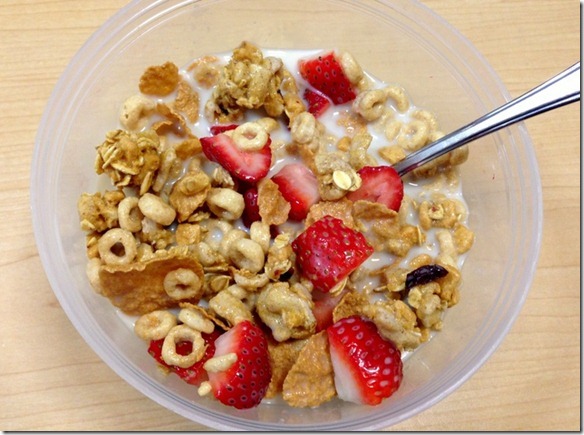 This was yesterday’s bowl, which was a combo of Honey Nut Cheerios Medley Crunch (OMG so good) and Kashi Go Lean Crisp (a favorite from back in the day!) with strawberries and almond milk. 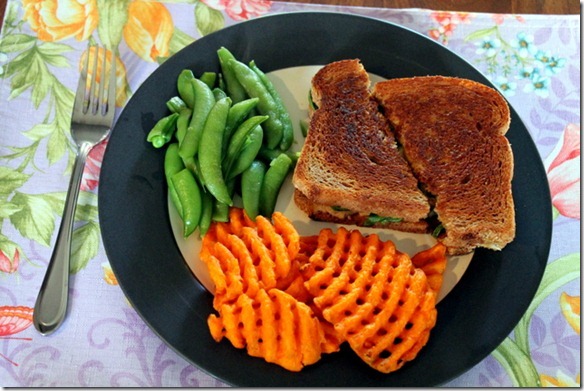 I cooked up some sugar snap peas and sweet potato waffle fries, but the real stars of the show were the grilled cheese sandwiches that I made for the both of us. Jay got a grilled ham, turkey bacon, and cheese, while I made myself a grilled roast turkey, turkey bacon, provolone, and spinach sandwich with honey mustard. 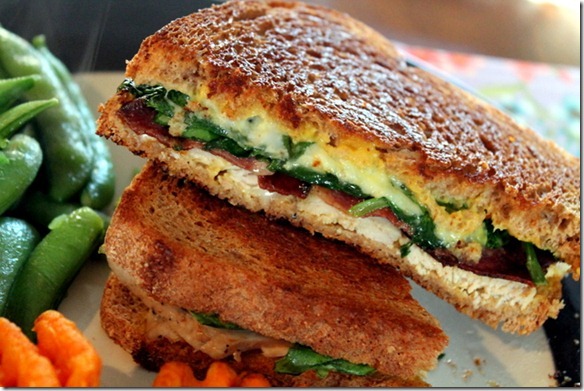 Ohhhh man, you guys. It was sooooo good.

Jay and I spent the rest of the evening playing with the Codster and catching up on this week’s episodes of The Voice. We also treated ourselves to a couple small dishes of Edy’s light french vanilla ice cream later in the evening. Love that stuff. ;)

On a different note, it’s been so heartwarming to see such an outpouring of support for the victims of the Boston Marathon tragedy. In case you’re looking for a way to help, here a few resources that I’ve come across so far:

If there’s any others that you know of, please let me know so I can add them to the list.