Hey, friends! How’s it going over in your neck of the woods? Everyone hangin’ in there?

I’ll be honest. Yesterday was a rough day for me. It rained all. day. long., which meant the boys were stuck inside and that never makes for an easy day. Alex must have told me at least half a dozen times “I’m boring” (he was actually trying to say “I’m bored,” but it was comical), the boys would not stop instigating and picking on each other, and I swear, if I had a dollar for every time I heard “MOMMY!” “MOMMY??” or “Mommmmmyyyyy,” I’d be a rich woman right now.

On top of that, I had a decent amount of work to do, combined with two bored little boys who just wanted to play with a mom who kept having to say “maybe later” or “not right now.” I felt short on patience, felt major mom guilt, and then made matters worse by reading/watching too much news coverage about all of this crap going on right now and just put myself in a bad headspace.

So once I was able to finish up my work for the day, I closed up the computer and tried my best for a mental reset. It wasn’t easy, but sometimes we just gotta fake it ’til we make it, right?

I don’t know about you guys, but do any of you just feel absolutely, mentally drained by the time you go to bed at night? Whew! Once the boys are in bed, I swear, the only thing I feel capable of doing is plopping on the couch to watch a show and eat a snack. Granted, that’s what I do most nights anyway, but it feels extra rewarding right now. ; )

Thankfully (!!) today has been a much better day, and is proving to be one of the more positive days in the way this quarantine has ebbed and flowed. And despite it being a much different looking Easter weekend for us this year, the past weekend was actually also pretty positive, too! So let’s try to switch gears and lighten the mood a bit, since I got all Debby Downer on ya there. 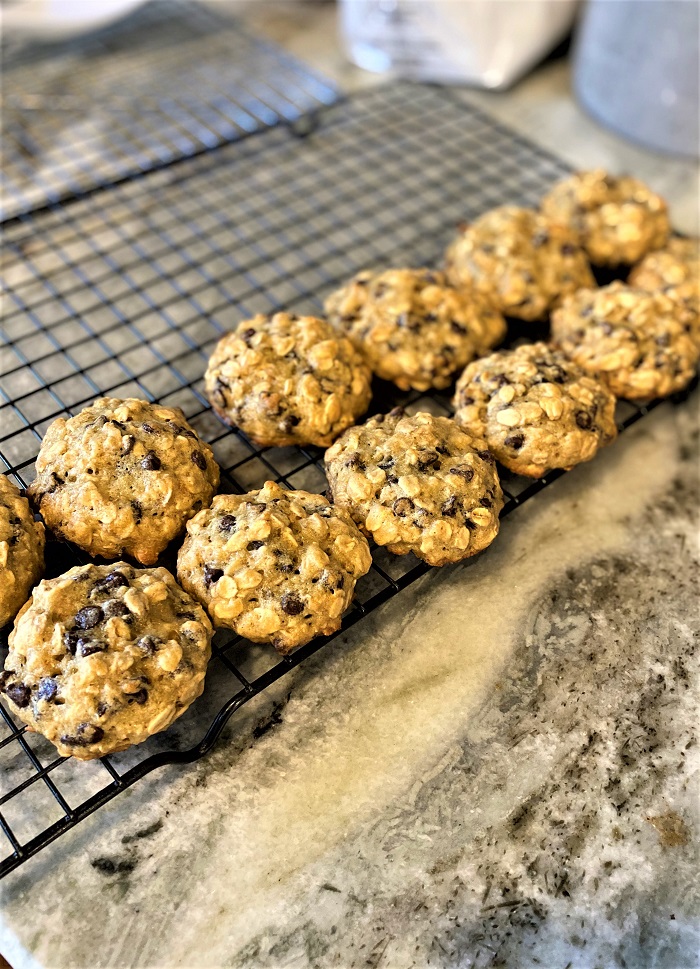 I’ve been getting the itch to bake a lot more frequently lately, and I had a few ripe bananas that needed to get used up. At first, I was going to make a batch of my Cinnamon-Sugar Crusted Banana Bread, but a cookie just sounded like it’d hit the spot. So Banana Oatmeal Chocolate Chip Cookies were the winner. 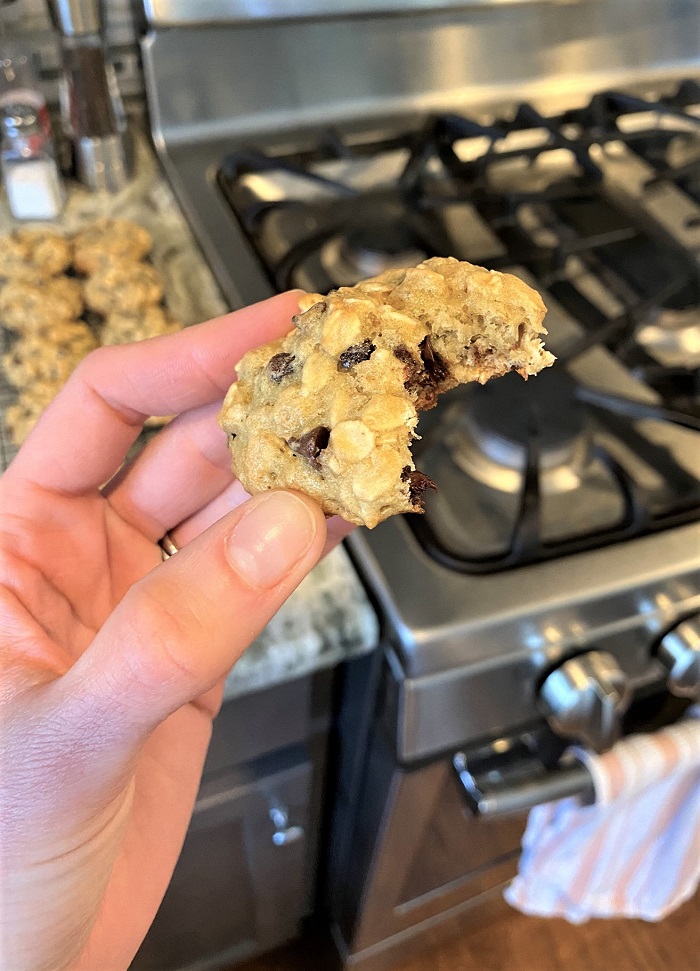 My favorite way to eat these, actually, is right out of the freezer! I don’t know why, but I love putting them in there and just eating them cold. Yum!

On Saturday, the boys were also treated to a little drive-by from the Easter bunny! I happened to spot something on our town’s Facebook page about an Easter bunny making his rounds, so I reached out to see if he’d be able to hit up our street. About 30 minutes later, there he was! And we had some excited little boys…even though they did make sure to tell me that it must have only been the Easter bunny’s “helper.” 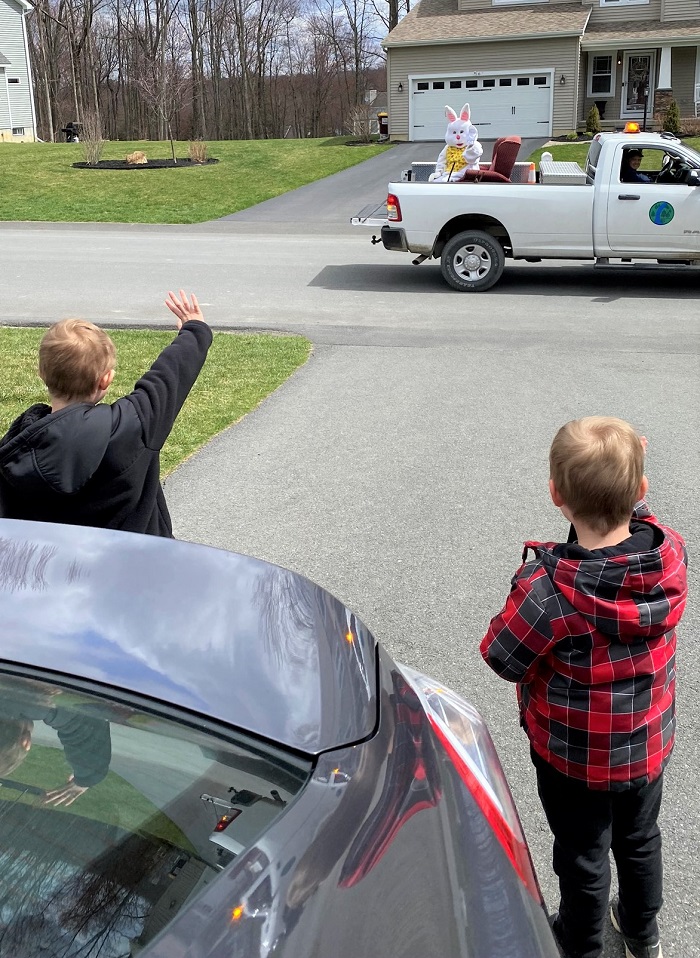 We also got the obligatory Easter egg decorating done on Saturday, too. If you’ve been reading for a while, then you may remember that this activity is one of my least favorite holiday activities ever. It’s messy, I can’t help but hover, and I just don’t love it. I tried switching it up this year and got some little roller things instead of the typical dye in cups (was able to add them to my Walmart grocery pickup order!), but they were just as bad. 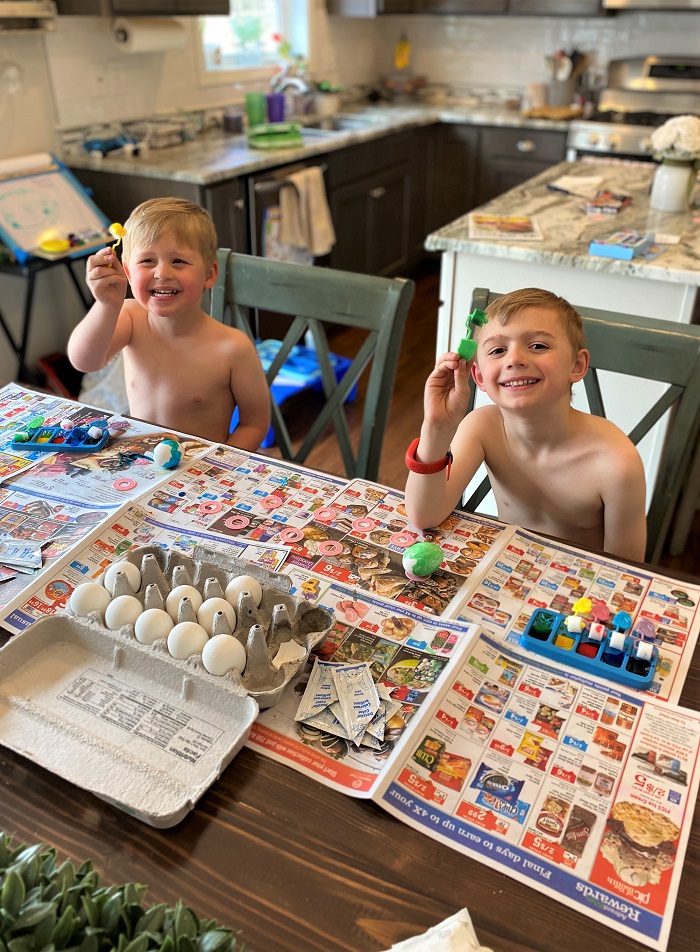 Next year, I’m getting that neat little tool that spins with the markers!

We also got a nice surprise on Saturday, in the form of this adorable cake my mom made. 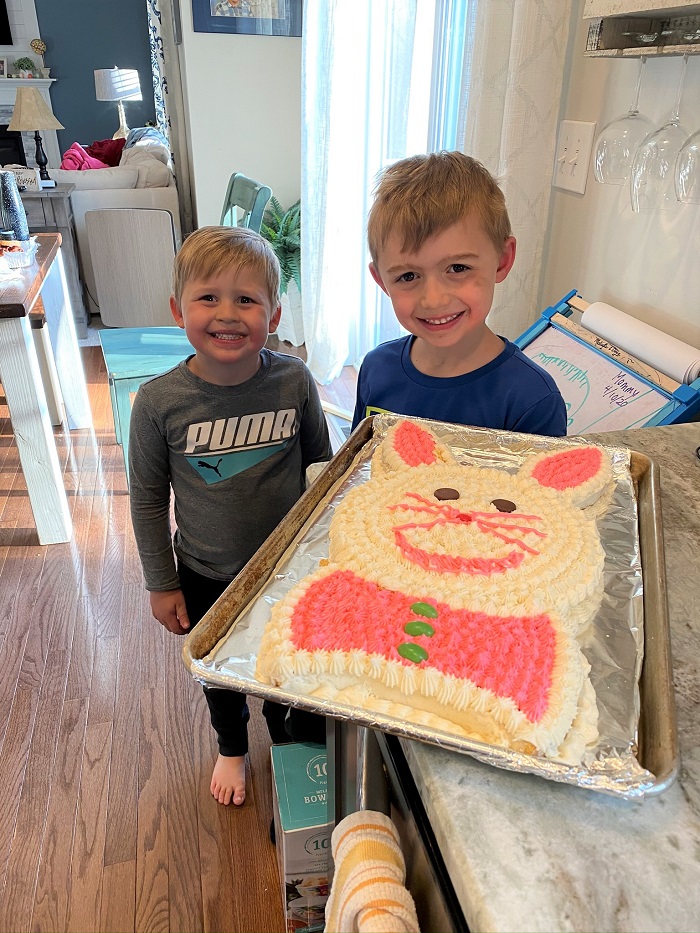 My parents did a little “stop and drop,” and we were able to chat a bit from a distance, which was so nice. Oh, how we wish we could be getting together longer! <3

Easter Sunday started bright and early, and these two were rarin’ to go find some hidden eggs. 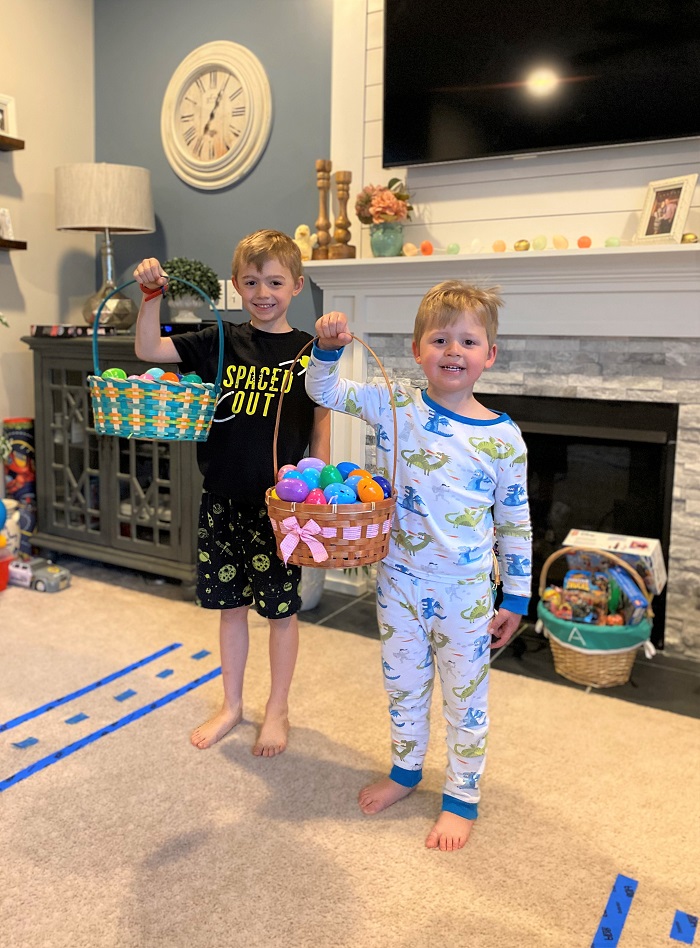 I never wound up counting how many I hid the night before, but I’d guess we were probably between 80-100. I just can’t help myself…!

We had a super chill morning, and the boys had fun with their new Easter basket goodies while I did a little more baking. 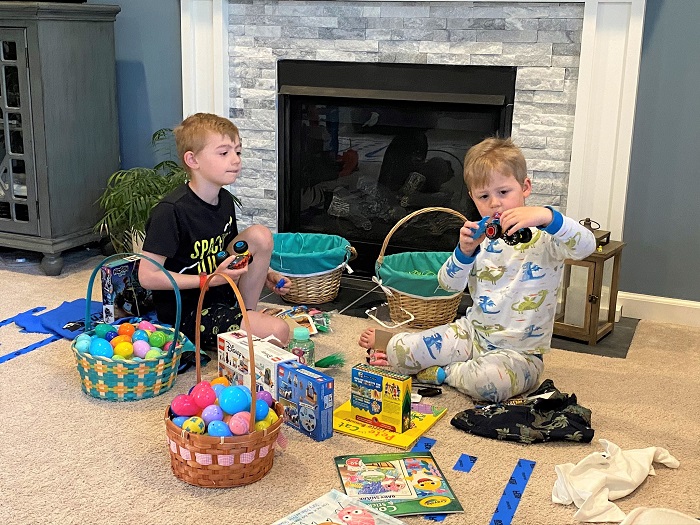 I’d been holding onto a bag of cinnamon chips for months (they’re SO hard to find, but you CAN get them on Amazon!) and decided that Easter was a good excuse to break them out and whip up a batch of my beloved Cinnamon Chip Scones. 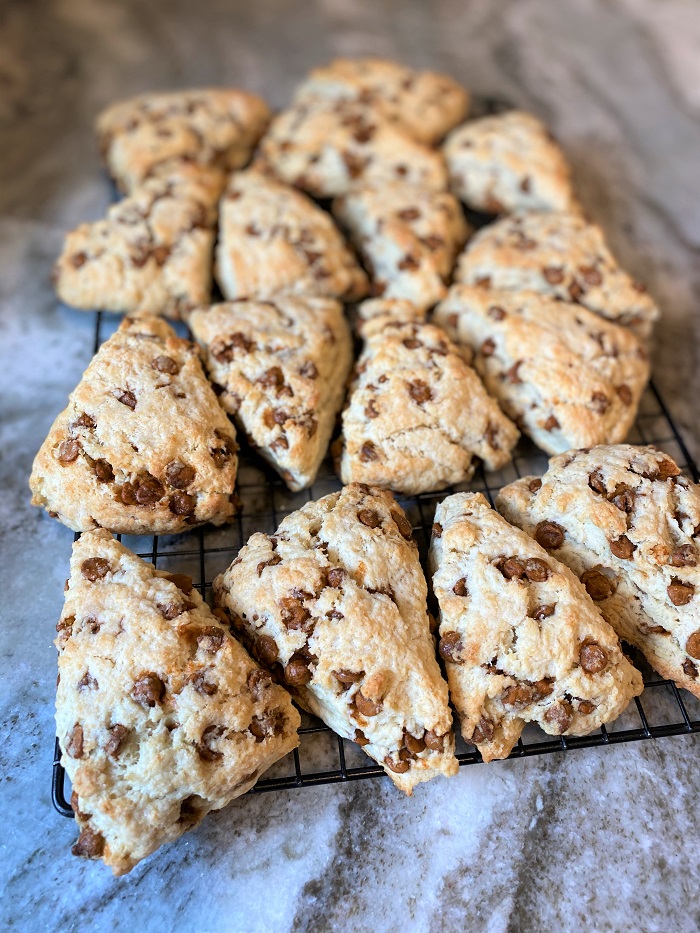 Side note: I had SO many of you reach out when I shared these on Instagram, letting me know they’re one of your favorites, too. So, thank you!! I always love hearing your feedback <3

We got real fancy for our Easter brunch, broke out the paper plates, and scrambled up the last of the (non-hardboiled) eggs we had in the house to serve alongside our scones. 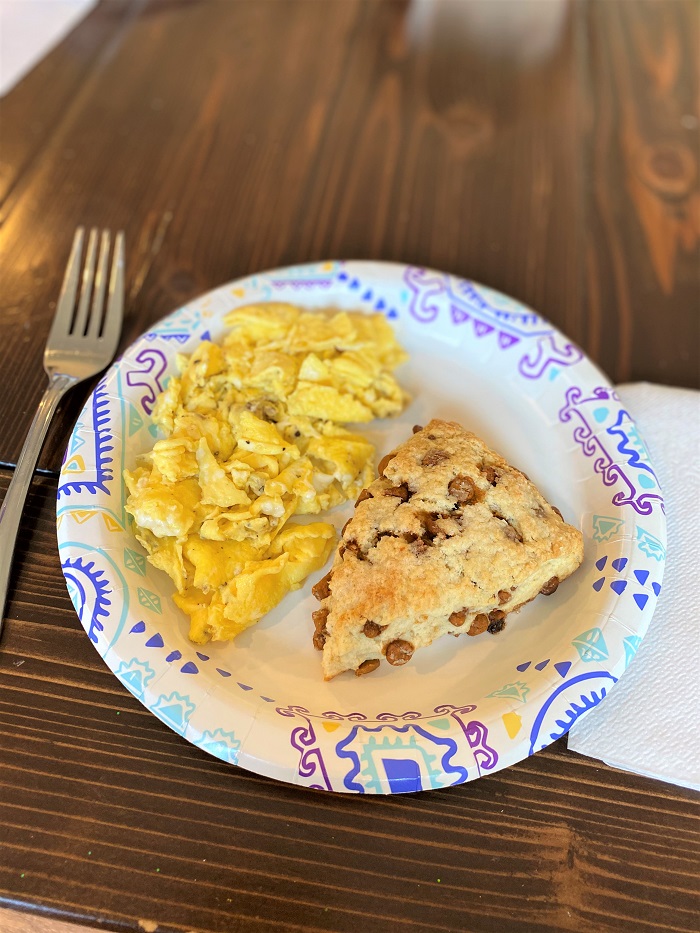 Throughout the day, we ended up watching a couple of movies, added a second set of stairs to our back deck, and let the boys play around in the backyard. It certainly didn’t look like a typical Easter, but we all really did have a nice day together, and that’s what matters.