Just seven weeks ago, I became a mom of two. That still blows my mind every single day.

The same goes for Jay. He was just telling me a story the other day about a conversation he was having with another guy who was telling him how he’s just not sure he’s ready for kids yet. We always laugh together when we hear people say this because Jay used to say this all the time. And to this day, his response is (now) “Well, I have two kids and I still don’t know if I’m really “ready!” Truth be told, who ever really is 100% ready? There’s always going to be something you wish/want to be more solid, more secure, more…who knows? But in the end, you just find a way to make it work.

Adjusting to two kids has been hard, but we’re still making it work.  We’ve lost a lot of the independence we had rebuilt as Lucas has gotten a bit older, and there have been a few times when we’ve been “down in the trenches,” so to speak, where we’ve asked ourselves what we’ve gotten ourselves into?!

Well before anyone goes thinking that we think we made a mistake or anything, I’ll stop you right there. Yes, two kids has been hard for us. We’re learning a new normal, and slowly but surely, we’re getting there. But the fact of the matter is, we were blessed enough to be able to bring this precious little man into the world and are lucky enough to be able to call both of these beautiful boys our sons. 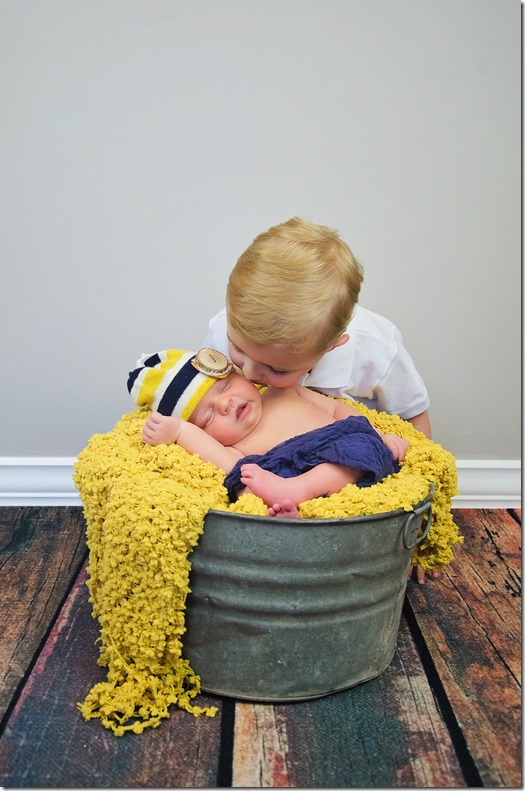 Alex’s face cracks me up in this picture!

So of course, we wanted to shout it from the rooftops to share with some of our closest friends and family. And with the help of Minted, who so kindly provided us with the birth announcements for Alex, we did just that. 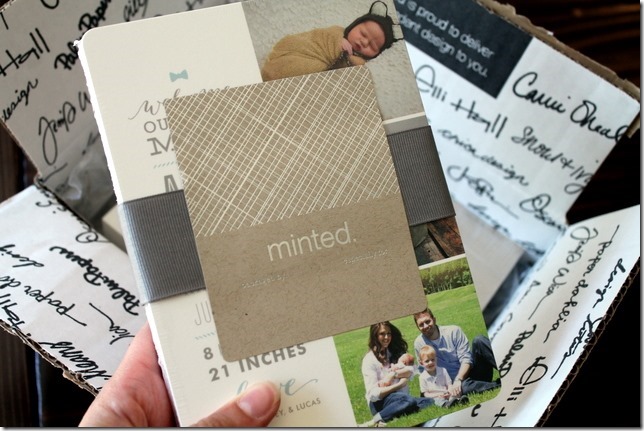 You guys have heard of Minted before, right? Minted is an online marketplace that connects you with independent designers from all over the world. They source it’s products from design competitions, too, which I thought was super cool.

I’ve fallen in love with them over the past year or so, and not only do I think their birth announcements are beautiful, but they’ve also got a TON of gorgeous art (some of which I’m excited to show you guys really soon!).

To help spread the word on Alex’s arrival, we decided to go with the Little Man Birth Announcements. 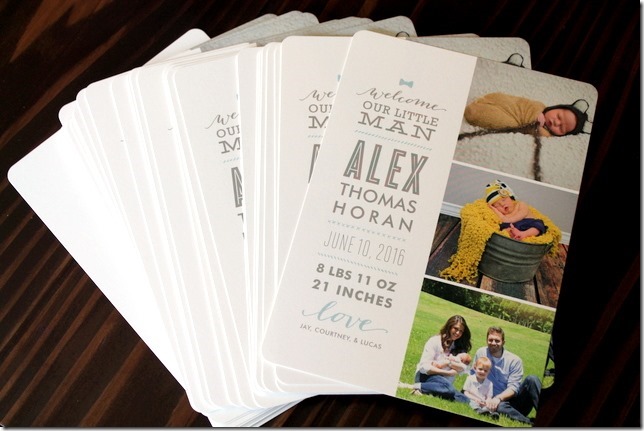 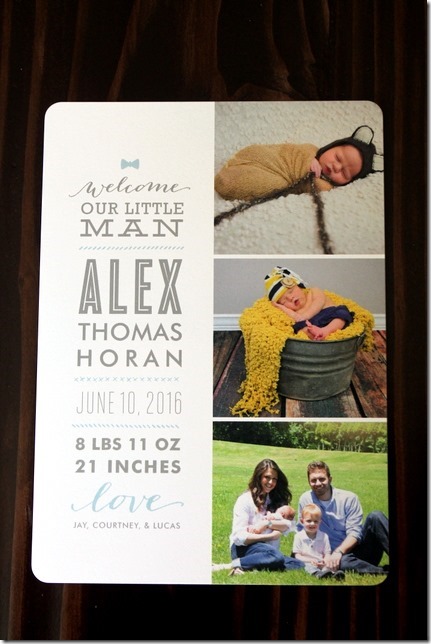 I also liked how this announcement allowed you to personalize the back as well, so we decided to add one of my favorite photos from when Lucas met Alex at the hospital. Did I ever even share this photo on the blog? I can’t remember. 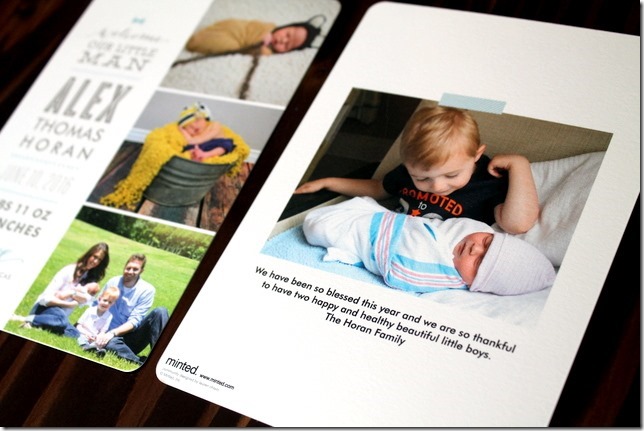 Another option I really loved and totally chose to do with these announcements was to have the envelopes addressed and ready to go. I knew that if I ordered them and would have to sit and write everyone’s addresses out, it’d probably be weeks before they actually got sent out in the mail. #newmomstruggles 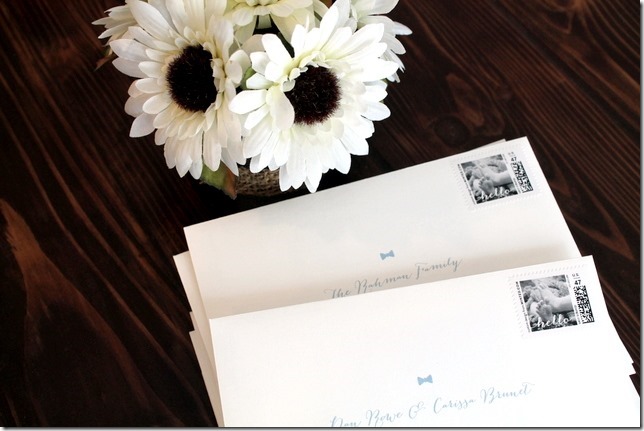 And to make it even easier to get them sent out quickly, you can even order the postage(!!!). I chose to do this add-on, and thought it was SO cool that I could make the postage stamps using a photo of ours. 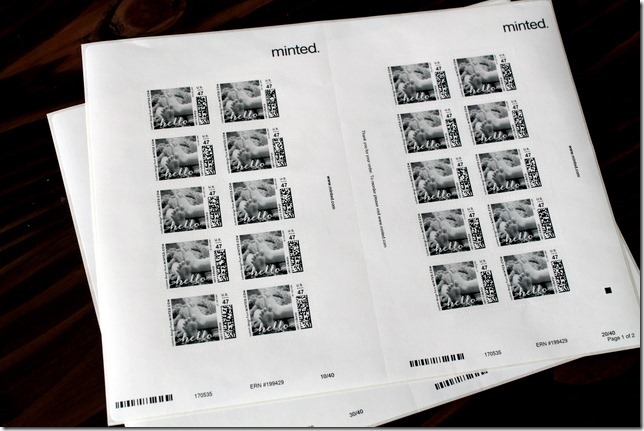 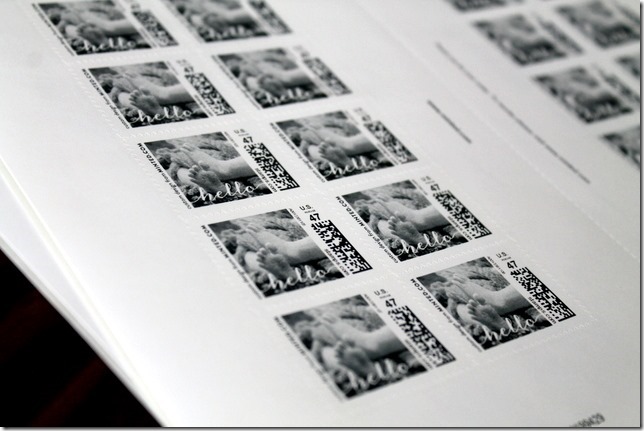 It’s also worth mentioning (and I have not been asked to do so, either) that the entire process for ordering was super easy and fast, too. Within hours of placing the order, I received an email with a final proof of the announcement (because they have a team that edits/proofs them). From there, since everything looked great, I was able to approve the order and get it delivered two days quicker!

So if any of you are in the market for ordering any sort of birth announcements, invitations, stationary, labels, planners…you name it!…I’d absolutely recommend checking out Minted.

Disclosure: Minted provided the birth announcements free of charge, but I was not provided additional compensation for this post.