Well, I actually did it…I took my bump picture in my pajamas. 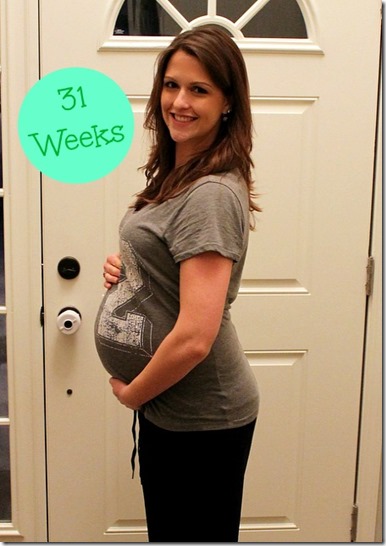 You guys know I love my cozies once I get home, and it wasn’t until after I put Lucas to bed last night when I remembered that I was going to take a bump picture for today’s post. So there you have it – my 8pm, worn-off makeup, un-brushed hair, and pajamas look.

But let’s get to the important stuff…the babe! Who is actively kicking around right now as I type.

Baby is just over 31 weeks today and is about the size of a pineapple (and here’s a comparison to 31 weeks with Lucas!)

HERE’S WHAT BABY TOOTH HAS BEEN UP TO THIS WEEK:

Weight gained: I’m not sure, but I’d be willing to bet that I’ve gained more so far with this pregnancy than with Lucas. I have another appointment tomorrow, so we’ll see.

Workouts: Not bad! I usually wind up taking a rest day in between my workouts now, so I’m closer to averaging 3-4 per week. I just find that I get sore a lot easier lately, so I’m giving my body some extra time to recover. I also attempted my favorite kickboxing workout on Sunday and I’m pretty sure I’ll be leaving that until after the baby arrives. It left me wiped all day!

Symptoms: Pretty similar to what I was feeling at 31 weeks the last time around, actually…

Movement: This little guy is a busy one! He loves sweets just like his mama, too.

Food Aversions: Not many that I can think of?

Food Cravings: This week had some newbies, including cinnamon rolls, rice crispy treats (which I had to make on Friday), and salami. I’ve had a salami and provolone sandwich the past two days (the salami is Applegate Farms) and they have been SO freakin’ good. 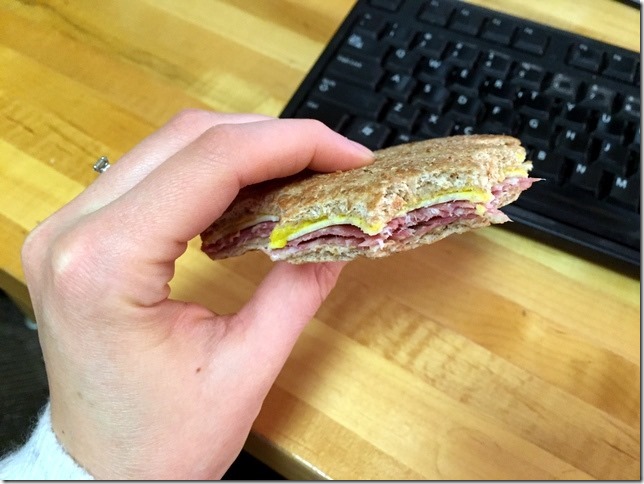 Sleep: So much better this week than last week when I was sick. I’ve been averaging about one wake up a night to go to the bathroom, but other than that, sleep has been good. I just need about 5 more hours of it each night and I’d be all set.

Miss Anything? The usuals…regular clothes, wine, my energy, and sleeping on my stomach.

Fun and/or Interesting Things from the Week: Getting Lucas into his big boy bed so we could actually start seeing some progress in the nursery! I’ve got the crib up in there, but the crib skirt I bought last week doesn’t work, so I need to return that and find a new one. I also bought a new pair of blackout panels for the room (I have the same ones in Lucas’s room and love them!), and they arrived yesterday so I’ve got to put them up, too. Slowly but surely, we’re getting there!

Belly Button in or out? I’d say we’re about flat at this point.

Happy or moody most of the time: Happy and emotional. Very, very emotional. And actually, I have noticed that I have shorter patience at work these days…whoooops. So I guess we’ll say I’m all of the above!

Looking Forward To: Hearing baby’s heartbeat tomorrow, getting the nursery a little more prepared, and maybe buying some stuff I’ve been eyeballing on Etsy.

Questions for the moms:

« The Bad, The Good, and the Exciting
Emergency Surgery for Cody »