“I participated in an Influencer Activation on behalf of Influence Central for Kenwood Vineyards. I received product samples and a promotional item to thank me for my participation.”

I pulled quite the butthead move on Monday, my friends. But I’ll get to that in a sec. First, let’s talk about Monday for a bit! I guess it’ll sort of be like a day in the life…just without the whole minute by minute breakdown, and a little bit of sponsored content (for a great cause) at the end.

So Monday was great because I actually took the day off from work and had the whole day at home to spend with my sweet, wonderful little boy. Well…that sweet, wonderful boy was nowhere to be found all morning long. Holy cow…I actually found myself counting down the minutes until it was morning nap time! I’m pretty sure the only time he wasn’t whining was while we had breakfast. 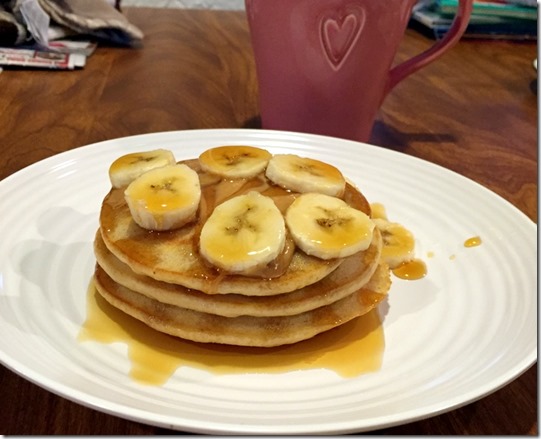 Then again, how can you whine at breakfast when there are pancakes involved, right? I always try to take advantage when I have extra time during the week, so once I had Lucas squared away with his pancakes and fruit, I made myself a quick batch of Kodiak Cakes with some PB, banana slices, and a drizzle of pancake syrup.

Luckily, it was just a case of “someone was apparently still tired and acting out” (wow, this has certainly intensified over the past couple weeks…can any fellow mamas relate??) and he was back to my sweet boy after an almost 3-hour morning nap.

I was able to get a bunch of stuff done while he napped, both around the house and on the computer, which was great (and MUCH needed!). Shortly after he woke up, we sat down for some lunch…

Lucas had some cheesy turkey meatloaves with steamed zucchini and avocado (in addition to half of a PB&J sandwich because he was huuuungry) along with some fruit. I, on the other hand, found myself too lazy to put any effort into anything so I grabbed a can of vegetable soup from the cabinet and topped it with half of an avocado. 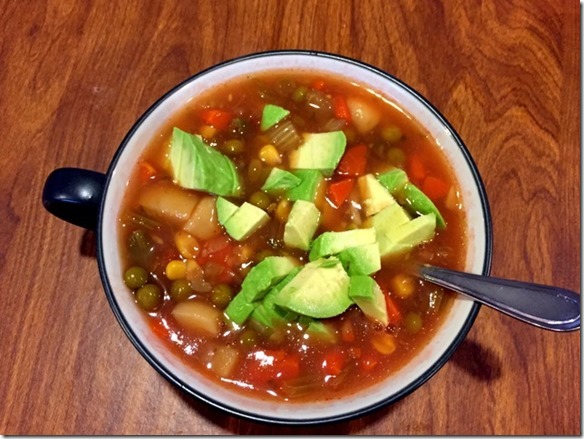 I tend to keep a couple of cans of soup on standby in case of emergencies…or in case of laziness. However you want to look at it.

After we finished up our lunch, I quickly prepped a little bit for our planned dinner for the night by sautéing up some onions and spices and tossed ‘em in the crockpot along with the rest of the ingredients for the Chicken Chili Verde I had planned (we never ended up making it last week).

Once that was all put together, I flipped on the crockpot and got myself and Lucas ready to head out and visit my 2 Nana’s (my grandma) for a little bit. 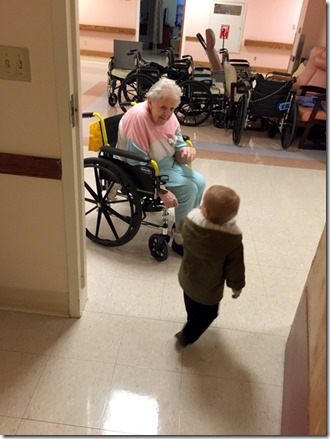 She was so happy to see him and Lucas had a blast flirting and playing peek-a-boo with all of the other ladies. Such a ham!

Shortly after we arrived back home, Lucas was ready for an afternoon nap (they’re hit or miss these days, and I was surprised he still took one with his super long morning nap) so I took advantage and got a little bit more work done for some posts on the blog this week.

I know I already warned you guys about this last week, but it’s worth mentioning again…I did a really bad job of spacing out sponsored content this week, so you’re gonna see a few. I’m still trying to keep a little bit of “Courtney flare” with each of them, but I get it.

Jay got home from work around 5pm while I was still working so we chatted for a bit, woke Lucas up from his nap (I swear, he would have slept the day away!), and then I went out to the kitchen to check on dinner. And THIS, my friends, is where we talk about my nice move. Because guess who put all of the dinner in the crockpot and turned it on…WITHOUT plugging the darn thing into the wall? 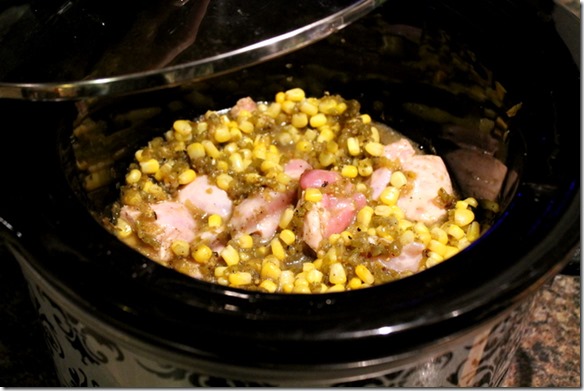 I was so frustrated that I immediately poured myself (and Jay, because sometimes I share) a glass of wine. 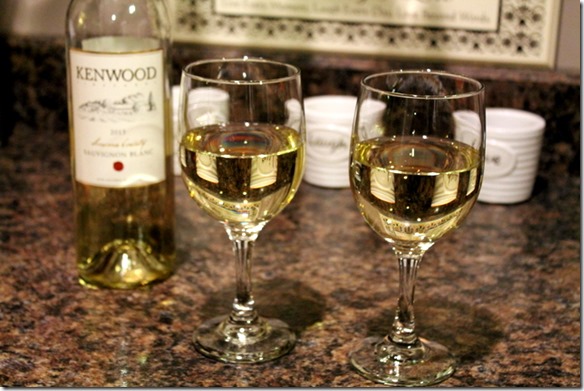 I actually recently received three bottles of California wine (some of my favorite wines come from CA!) from Kenwood Vineyards, who source grapes from dozens of sustainable local vineyards in and around Sonoma Valley, using natural soil amendments and pest controls, rather than chemicals. 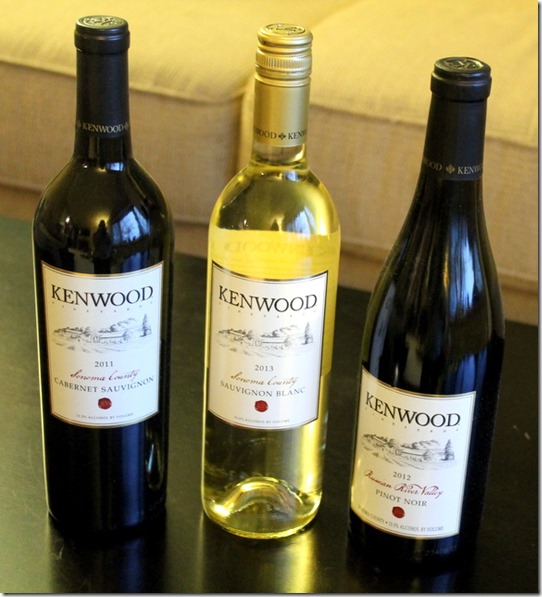 So far, we’ve only tried the Sauvignon Blanc and it was absolutely incredible. We both agreed it definitely made its way towards the top of our favorite list! I’m now really eager to try the Pinot Noir and the Cabernet Sauvignon…perhaps this weekend?

This Thanksgiving, Kenwood Vineyards is teaming up with WhyHunger and donating $25,000 in support of ending hunger and giving back during the holiday season.

So what is WhyHunger?

WhyHunger is a recognized leader in the movement to end hunger and poverty by
connecting people to nutritious, affordable food and supporting grassroots solutions
that inspire self-reliance and community empowerment.

I always love and appreciate when a brand teams up with a cause that I feel is so important. The Thanksgiving holiday always gives us the opportunity to reflect and give thanks for the things in our lives we’re most grateful for…

I feel like giving thanks tends to be at the forefront of our minds this time of year, and I often try to find ways to give back to great causes such as this. I’ve already gone ahead and made my donation, but if anyone else is interested in giving back, please feel free to check out the Kenwood Vineyards WhyHunger donation page.

You can donate as much or as little as you’d like!

Thank you, Kenwood Vineyards, for partnering up and donating to such a great cause. 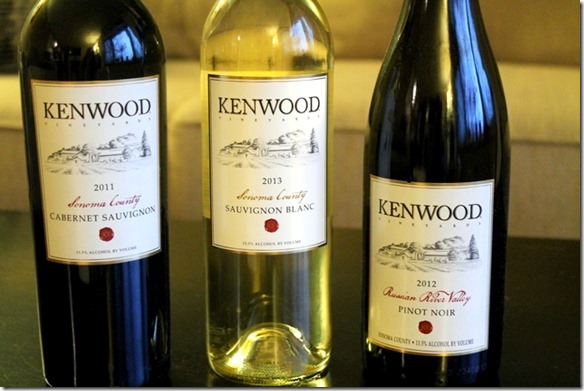 I’ll tell ya…it really puts things into perspective when you think about all of those in need, and all I had to get angry for was forgetting to plug in the crockpot. A nice kick back into reality sometimes is all you need!

So we nixed the idea of having the Chicken Chili Verde for dinner that night and we (Jay and I, we took care of Lucas’s dinner) basically wound up snacking throughout the evening…including a small dish of leftover spinach artichoke dip from Saturday. 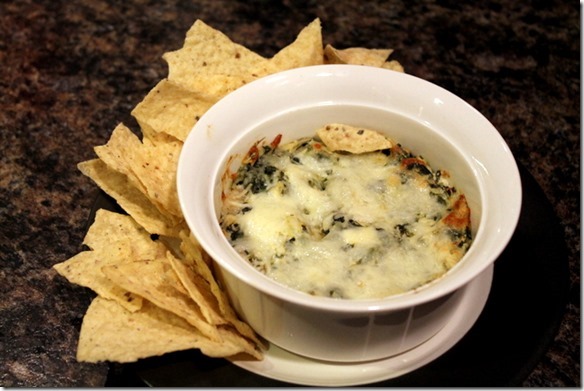 I made these Spinach Artichoke Bites for our Friendsgiving on Saturday and had a little filling leftover. So I just spread it into a dish, topped with some mozz cheese, and kept it in the fridge until Monday when we reheated and chowed. It was SO good (and so were the cups – I’d definitely recommend making them!).

So there’s a little look at my Monday and my butthead move. Tell me I’m not the only one that’s happened to? What other butthead moves have you made lately??