Well I must say, this weekend left me feeling quite festive and all sorts of excited about this season. 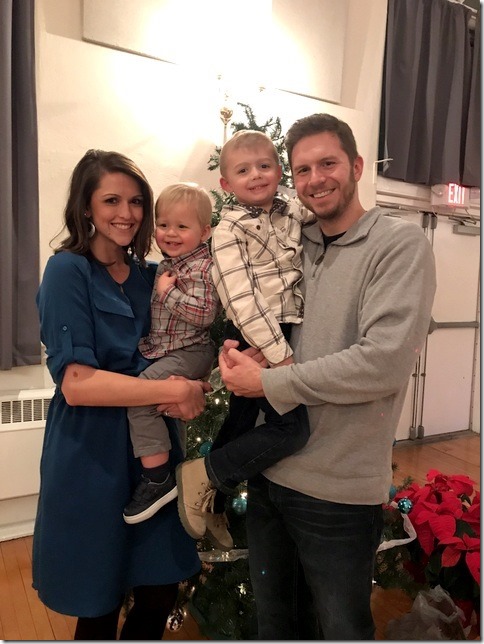 And not just the Christmas season, per se, but even just this season of life. I mean, it’s definitely a tough season of life. You guys know that we certainly deal with our fair share of struggles. But man, is it FUN though. It’s crazy, but it’s so cool, and being able to share in the joy and excitement of these kiddos just really does wonders for making the tough stuff seem a little less…tough. Ya know?

We had our first of a few Christmas parties that will be coming up this past weekend with Jay’s side of the family and, as always, it was a great time. The kiddos all got to run around and play, and the parents got to chat in between rounds of searching for- or chasing after said kiddos. ; ) 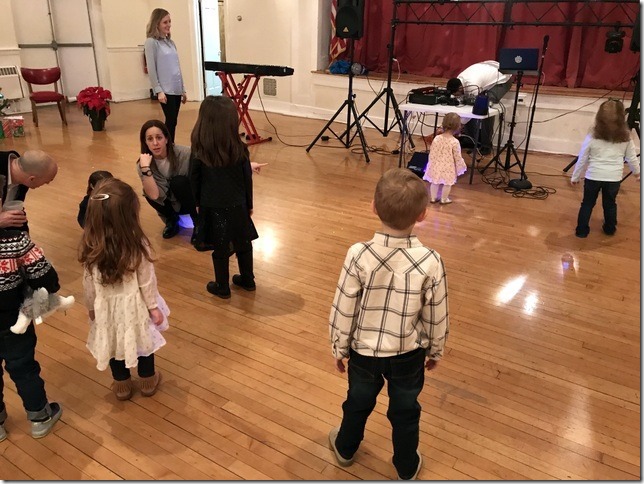 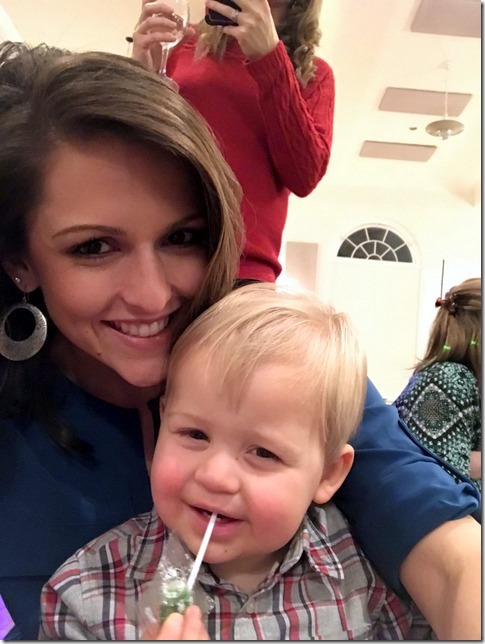 There was a delicious buffet dinner, which was enjoyed by all. 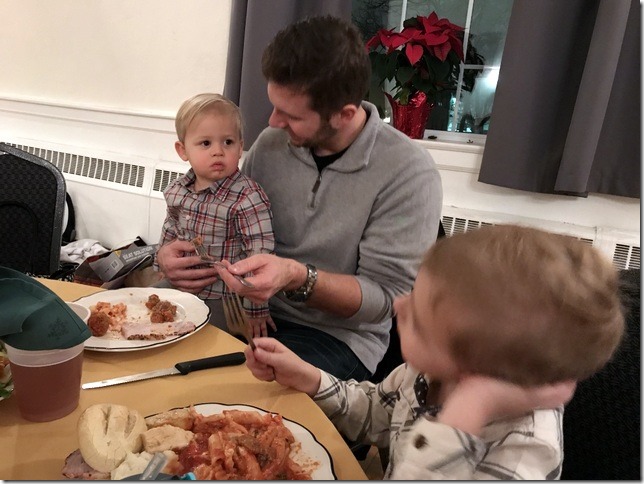 And even some fun on the ping pong tables! 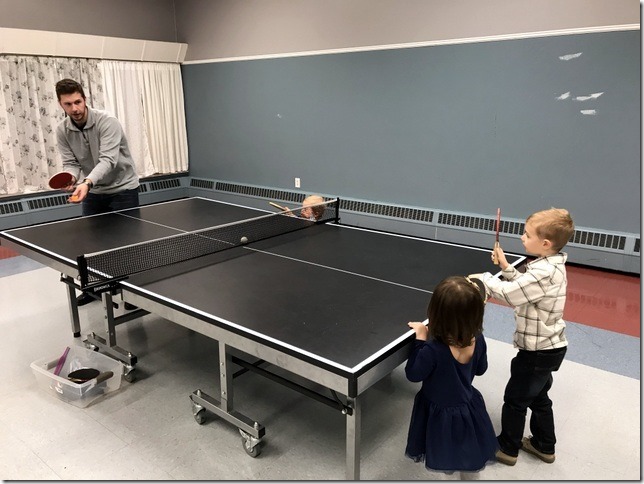 While we were in playing ping pong, we were surprised to see that Santa had entered the room. Those of you who have been reading for a while likely know about Lucas’s fear of Santa, so we had been prepping him all week for seeing Santa (he didn’t even want to go to the party initially because Santa was going to be there…seriously, I stand by my claim that I really do think he had a nightmare about Santa!).

So Lucas wound up seeing Santa before we could really do or say anything, and much to our surprise, he wound up being more in awe of him than anything else. It was absolutely adorable to watch. 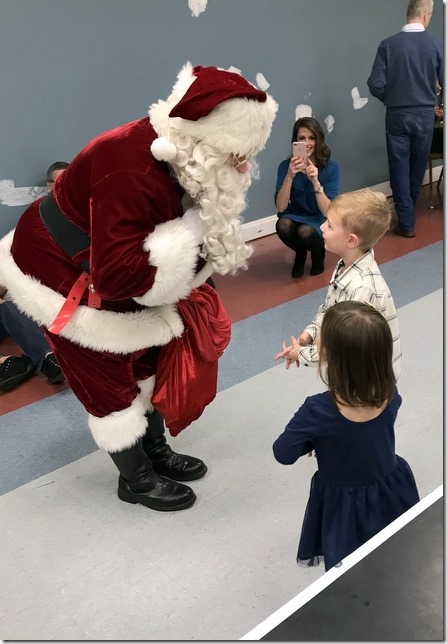 Shortly after our initial encounter, all of the kids gathered around to get ready for Santa to give out his presents. 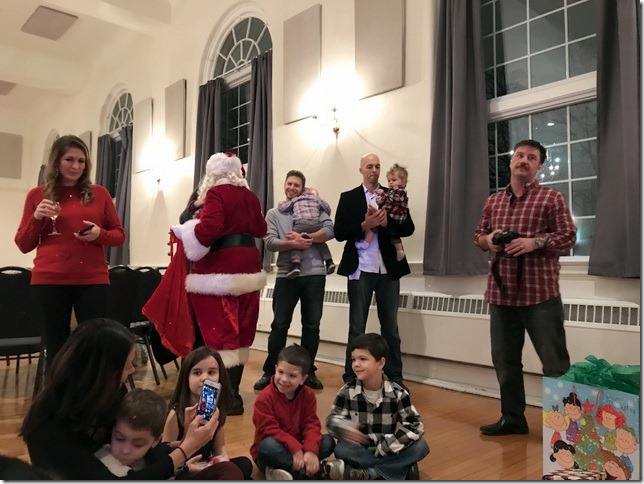 Alex had no idea what was coming… 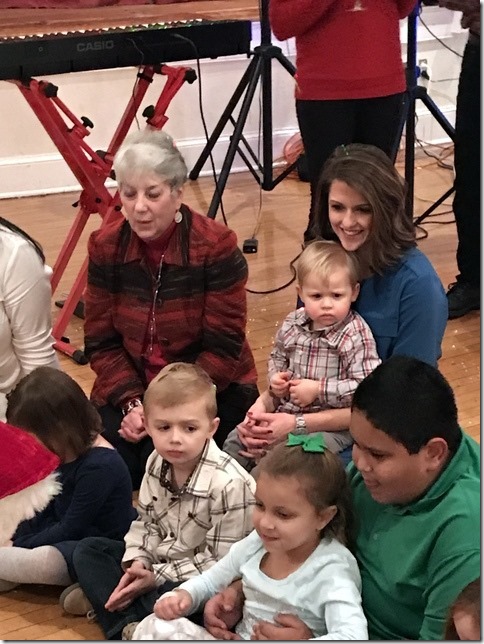 And Alex actually got called up first before Lucas and, well, it went pretty much as I expected. 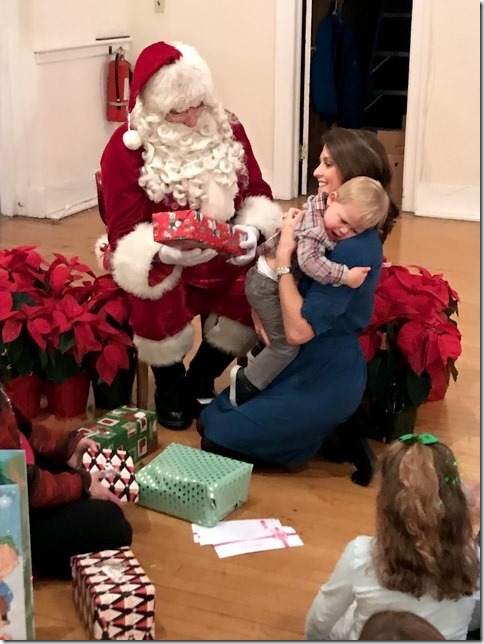 Poor kid was hanging on for dear life, haha! 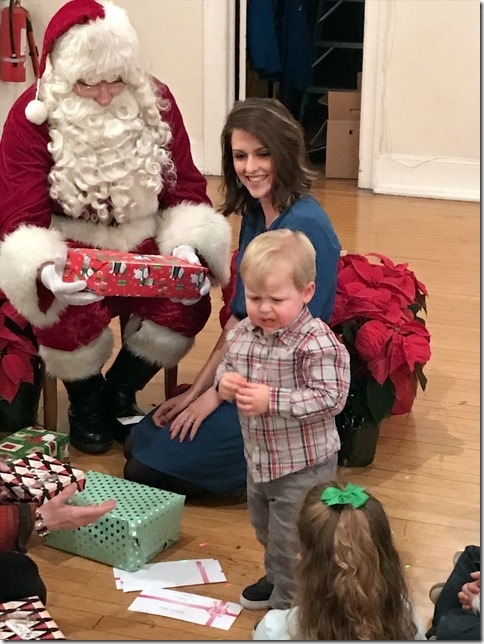 Lucas went second, and he hopped right up and was more than ready to go see the big guy. 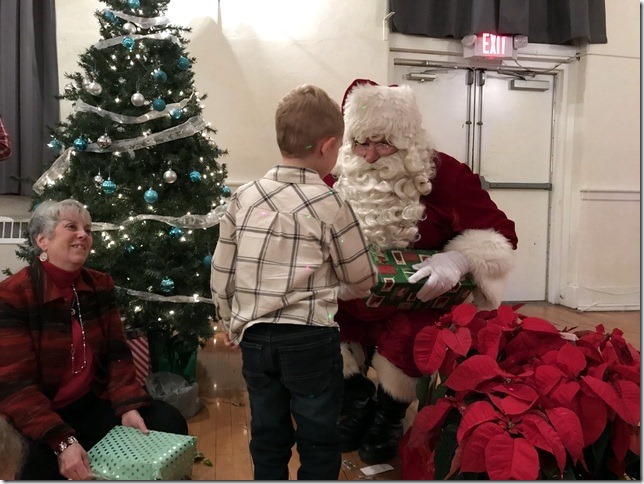 It made me so hopeful that mayyyybe, perhaps, we’re past the fear of Santa…but the next day, he made sure to tell me that he “doesn’t like Santa” again, so who knows? 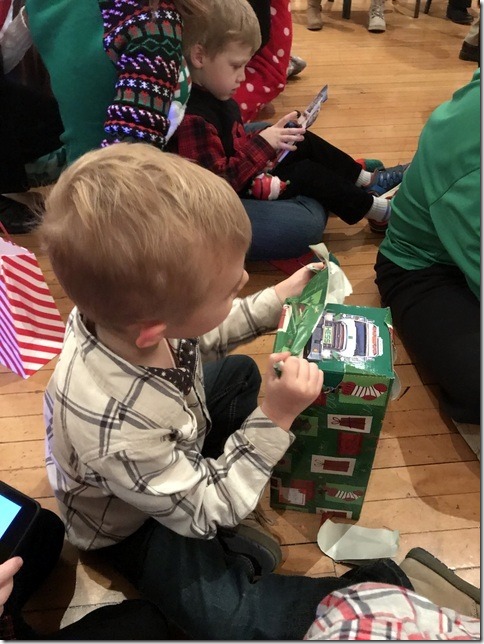 Regardless, it was a great party!

In addition to partying it up with family, this weekend also included some SNOW. And quite a bit more if it than any of us expected! 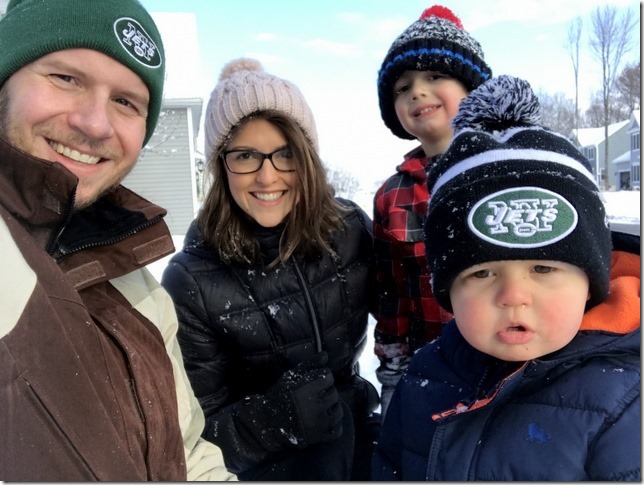 Note to self…Lucas needs a new hat that actually fits his head : ) 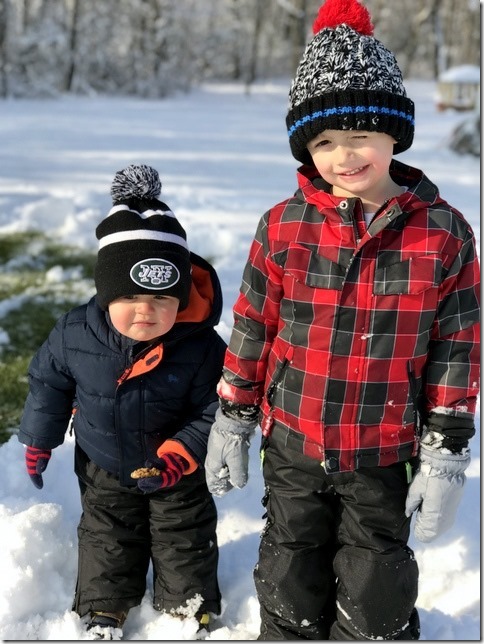 We had bought the boys a new sled for Christmas, but after seeing how much of it was outside, we decided to give it to them a little early. Aaaaand, they loved it! 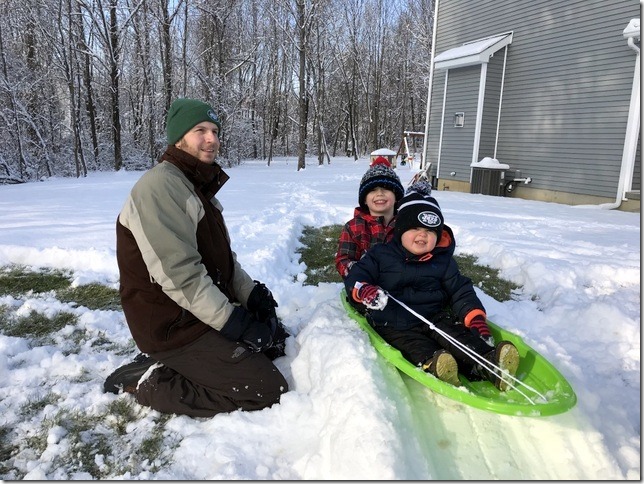 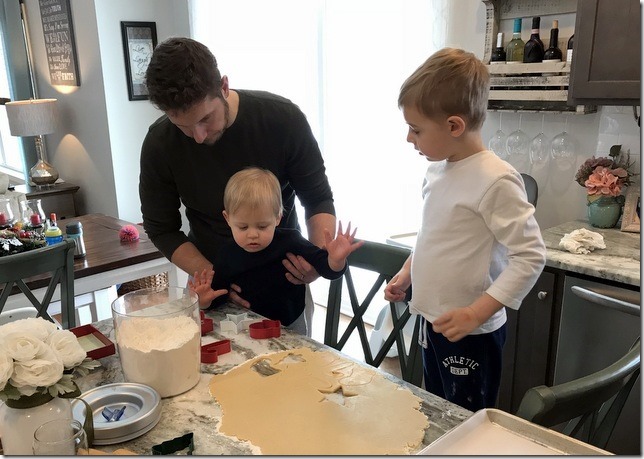 Lucas had been asking to bake cookies for a couple of weeks now, and we finally had some time to do the whole thing this weekend. 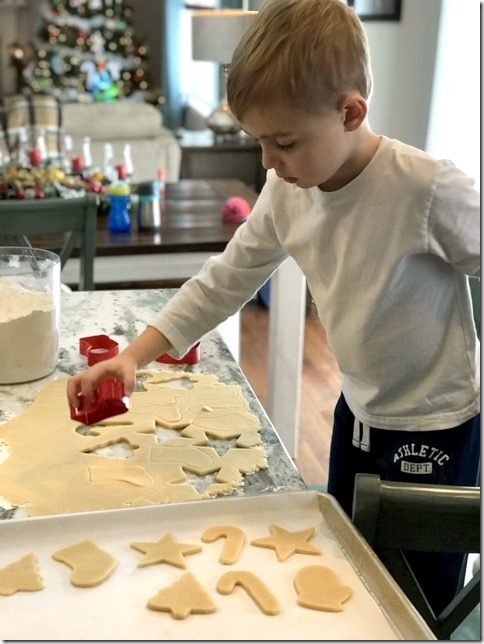 The boys got all sorts of sugared up on frosting right before dinner, but hey…when in Rome, right? 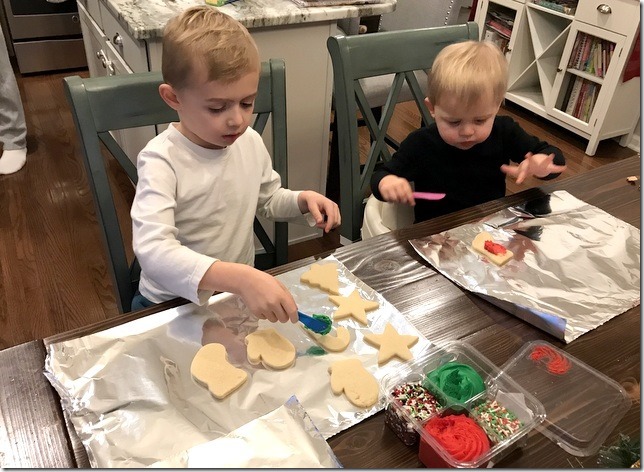 Making rolled/cut-out cookies is definitely not my favorite, but I must say, I do love them! 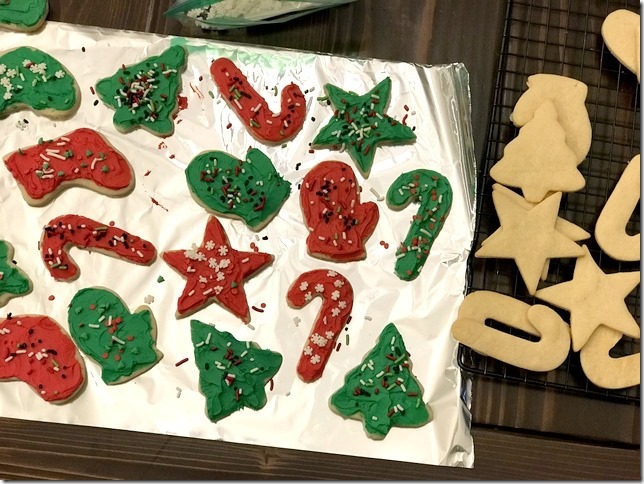 It was really the great way to wind down what turned out to be an awesome weekend…even if Lucas has ONCE AGAIN, ended up sick. 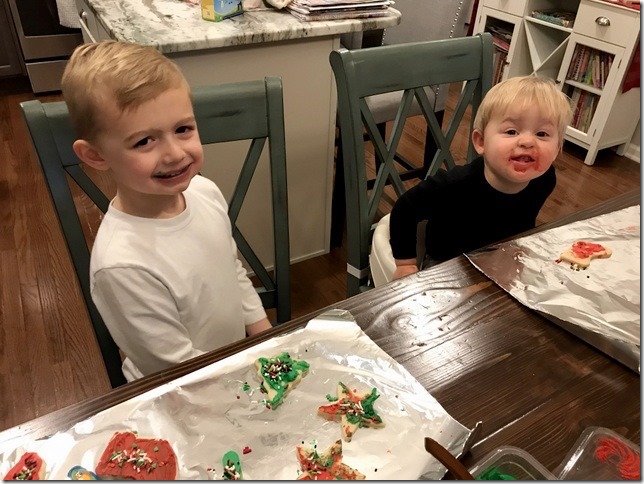 I swear, this kid can’t a break. Now we’re on to swollen tonsils and a sore throat, and just an overall blah feeling which has had in bed before 7pm for the past two nights. Depending on how he is tomorrow, I may wind up taking him to get tested for strep (again…) because he’s definitely not himself. UGH, poor kiddo <3

So if you can, send us some positive and HEALTHY vibes, mmmkay? ; )