Sooo, all weekends are typically nice because that means no work and more time with the fam. But then there are the weekends when your kids really are just SO incredibly pleasant and fun to be around and it makes your whole weekend 1,000 times better.

Parents, you feel me, right??

Jay and I actually got to have a few kid-free hours out on Friday night for a happy hour at my boss’s house, which was a lot of fun. The delicious, homemade sangria that was there also probably had something to do with that.

Then on Saturday, we didn’t get our first wake up call until 7:45am in the morningggggg. Like, 15 minutes before 8am. YESSSSSS. It was all sorts of wonderful. 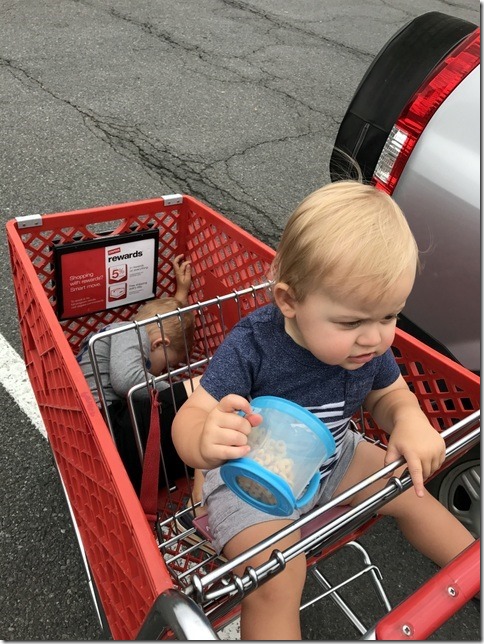 We first stopped at Staples so I could pick up some Usborne-related supplies, which went super smooth. I think Lucas only asked for about 3 random things and Alex was just obsessed with the lights in the ceiling.

After that, we headed to the post office so I could mail out some book prizes and, again, they both shocked me with how well they did. We had a bit of a line to wait in and everything!

So two successful stops called for a celebratory third stop before heading back home. 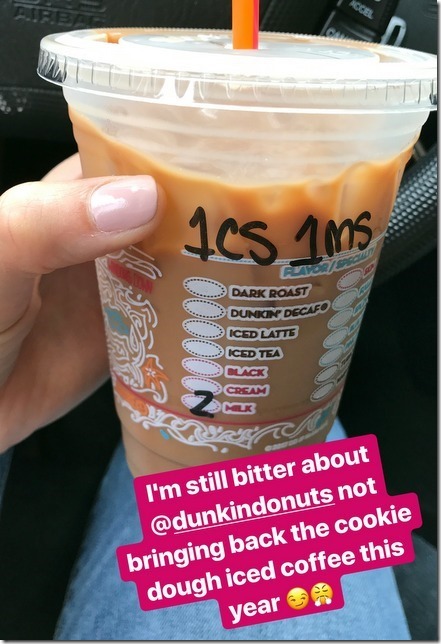 We got back, the boys had lunch, Alex went down for a nap, and Lucas and I got a good couple of hours to hang out just me and him which was so nice.

Later in the afternoon once Jay got home, he suggested that we all head out to try a new BBQ place that recently opened up just a little ways down the road from us. Seeing as this is something that hardly EVER happens (aka, all of us going out to eat, let alone Jay being the one to suggest it) I immediately said YES LET’S DO IT. 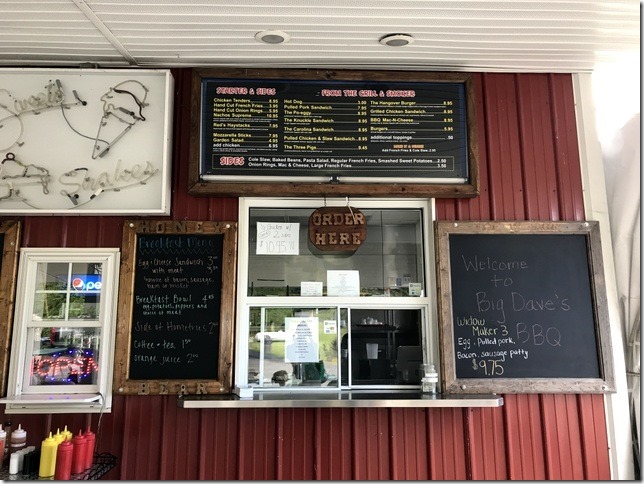 We got there a little after 5 hoping that it wouldn’t be too busy and it wasn’t at all. Plus, they also have outdoor seating, which was another bonus. 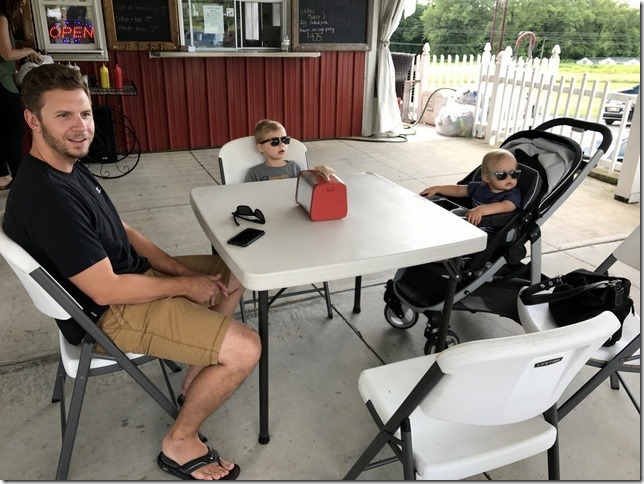 As for the food? Meh…not very good. I got pulled pork and we both agreed that everything was just sort of lacking flavor all around. But nonetheless, it was still a nice evening out with the family. 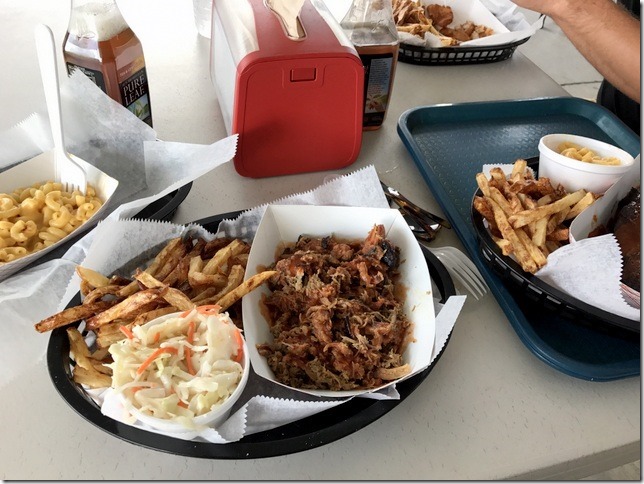 Just as we were getting home, we actually heard the sounds of the ice cream man approaching, so Lucas’s night was made with the purchase of an enormous bomb pop. 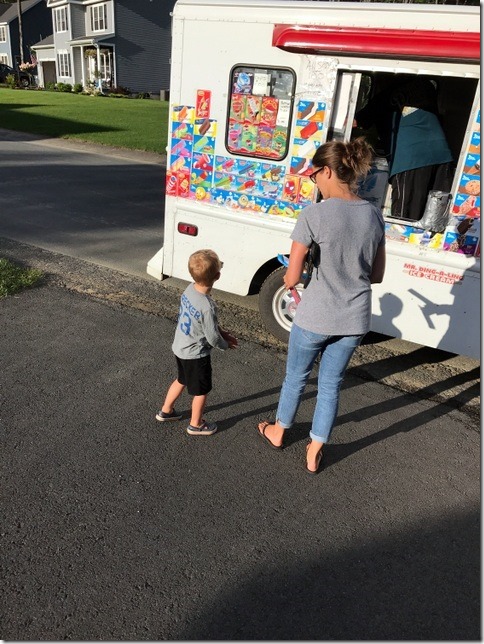 And my night was made after being offered this crazy delicious combination of my favorite ice cream EVER + chocolate chip cookies by our neighbors. 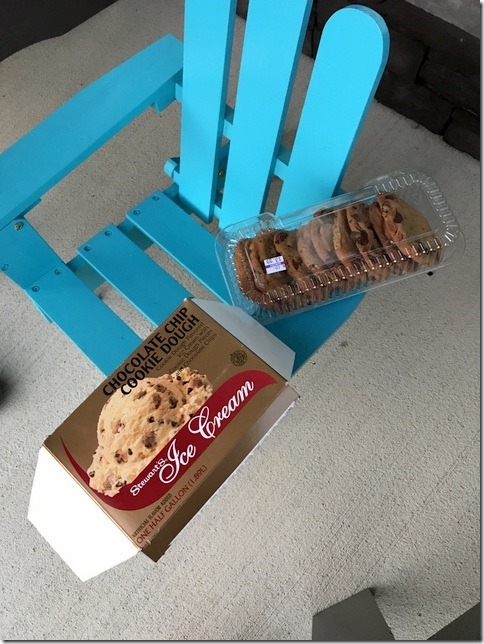 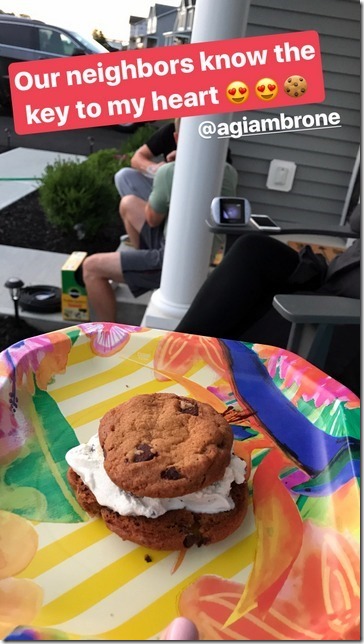 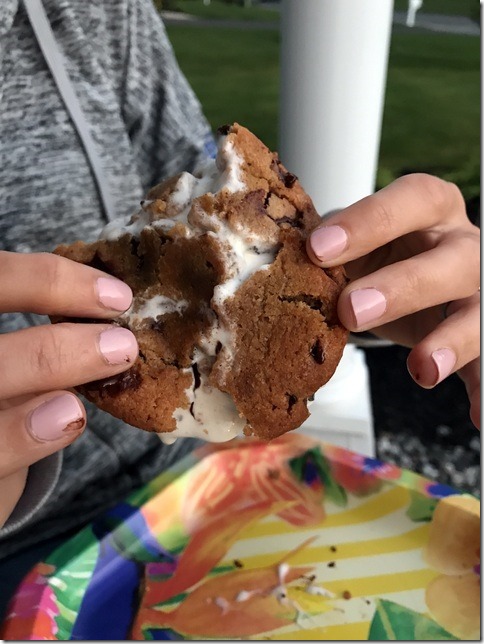 As for Sunday, I had one particular project that I really wanted to try and accomplish, which meant I needed to go in search of four matching picture frames. I definitely thought that At home would be a sure bet. 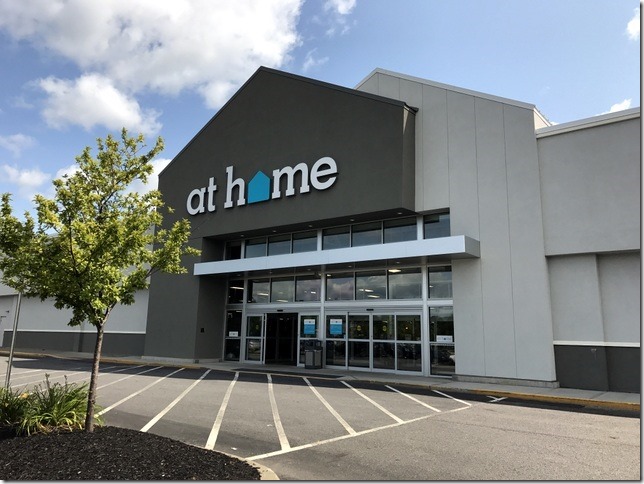 Unfortunately, it just left me suuuuper frustrated because any time I found a frame that I liked, I could only find two or three of them. It was just ridiculous. 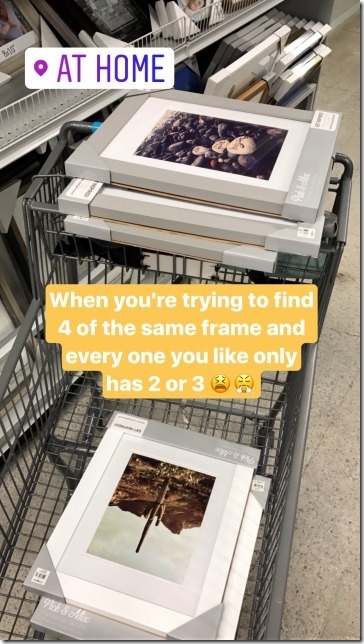 So I left with no frames. And I also had to hold myself back from going nuts in the fall aisles… 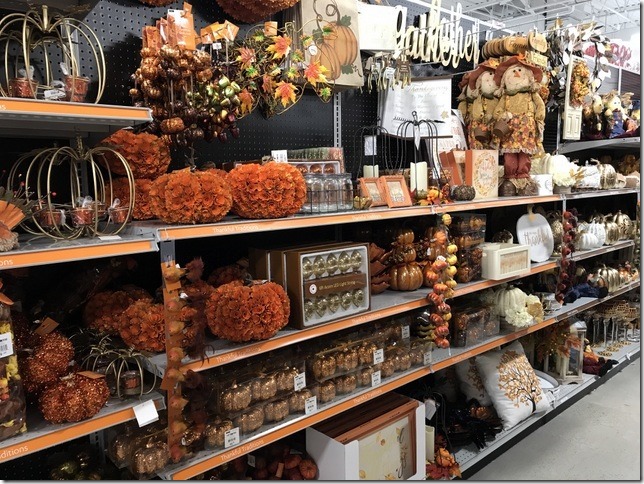 Not. Yet. Courtney. It’s only the beginning of August…

While out and about, I also stopped at Starbucks to use some of a gift card I had on an iced caramel macchiato + some of their new Bacon & Gruyere Sous Vide Egg Bites. 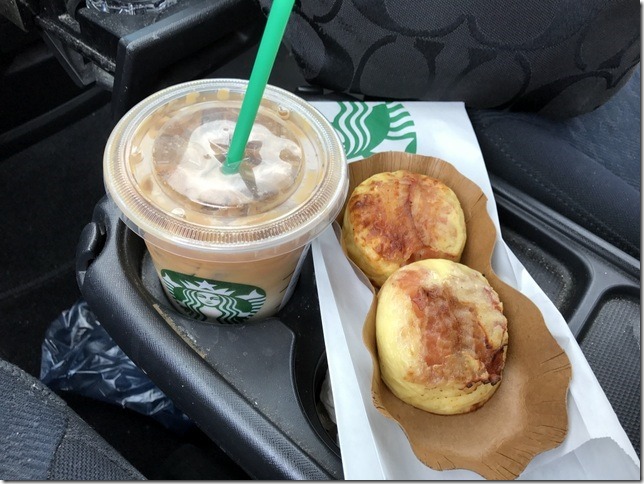 I will say, I was quite impressed by them. Granted, I was beyonnnnd starving by the time I ate them so I think anything would have tasted amazing, but they really were very good. I’d definitely get ‘em again!

Oh, and speaking about things I’d likely get again (but I haven’t even tried them yet so I guess I’m jumping the gun a bit)…check these babies out. 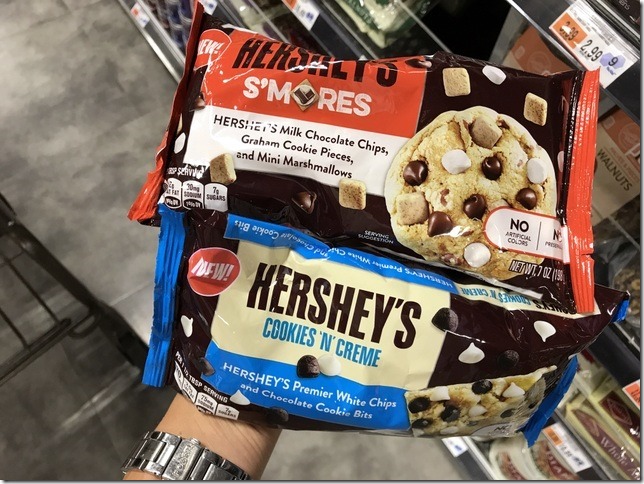 Spotted these at the grocery store and ended up buying the cookies ‘n’ crème ones. I most definitely plan on making some cookie bars with those and some extra chocolate chips VERY soon. Like, maybe today.

Grocery shopping was my last (solo!) pit stop of the day, and after that it was a beautiful day spent outside with my favorite boys. We went for walks… 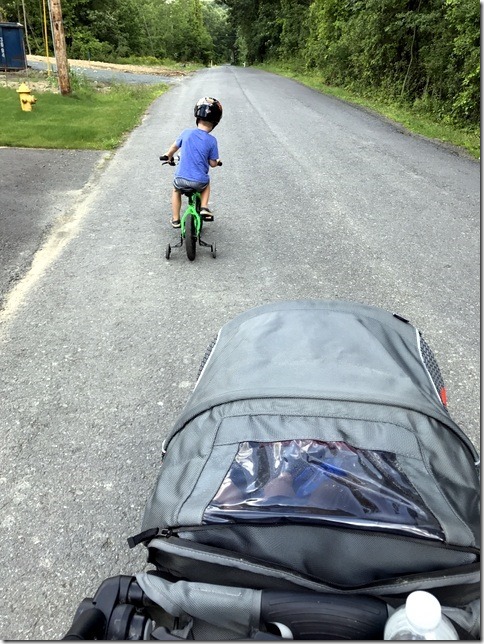 We played on the playground… 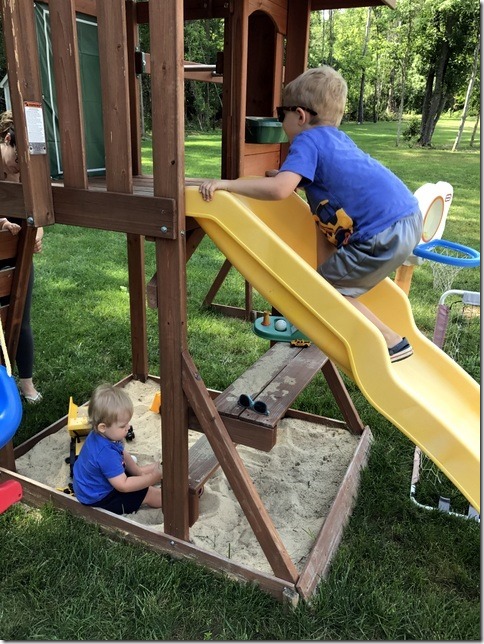 And we swung on the swings <3 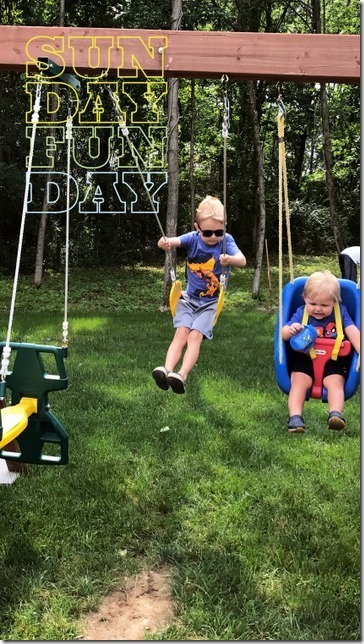 And to end the evening on another high note, we even had this delicious Blue Apron meal for dinner. 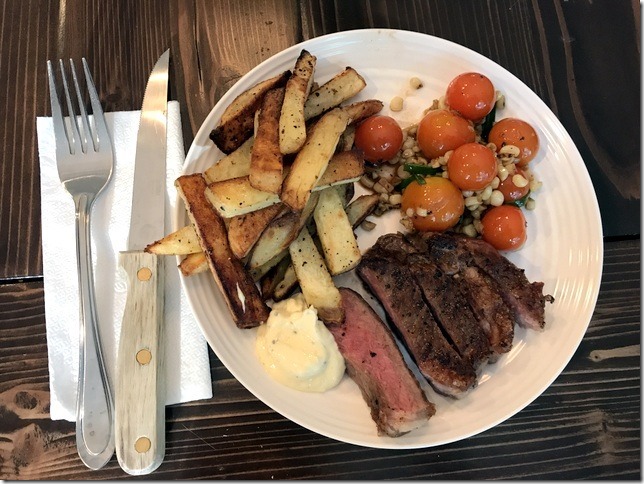 The corn and tomato salad? SO. GOOD. Definitely something we want to make again on our own!

And now I’m finishing up this post on Sunday evening and about to go find something for dessert and then possibly watch our next episode of our latest Netflix show, Gypsy. Anyone else watching? We’re only two episodes in so far, but I’m totally intrigued!

Have a great day, everyone!