Every so often, I get the sudden desire to want to decorate or redecorate some aspect of our home.

Sometimes, they’re a little larger in scale, and those get put on the wish list. Other times, they’re completed a little too quickly and they wind up needing to be re-done again in the future because I made a decision way too fast (I’m lookin’ at you, kitchen backsplash…).

Bless that man who calls himself my husband and puts up with all of my shenanigans.

But then there are other times where I get a vision, and I run with it, and it turns out exactly as I had hoped for…which is what has happened (so far) with our little office makeover!

Here’s how it looked last week… 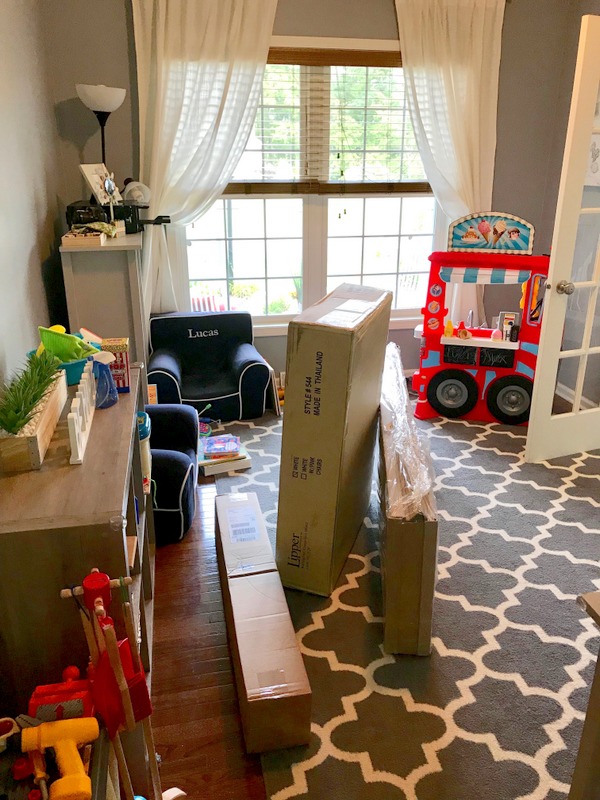 This room has pretty much been a bone of contention for me since we moved in a little over 3 years ago. Furniture has been arranged and rearranged, toys have flowed in and out of it, and it’s purpose has juggled back and forth between being more of an office and more of a playroom.

But now that Lucas is in kindergarten, I really wanted to try and provide a special space in the house where he’ll be able to relax and do his homework, as well as something that Alex can enjoy, too. So the first thing that came to mind was finding the right size table and chairs to put in the room. 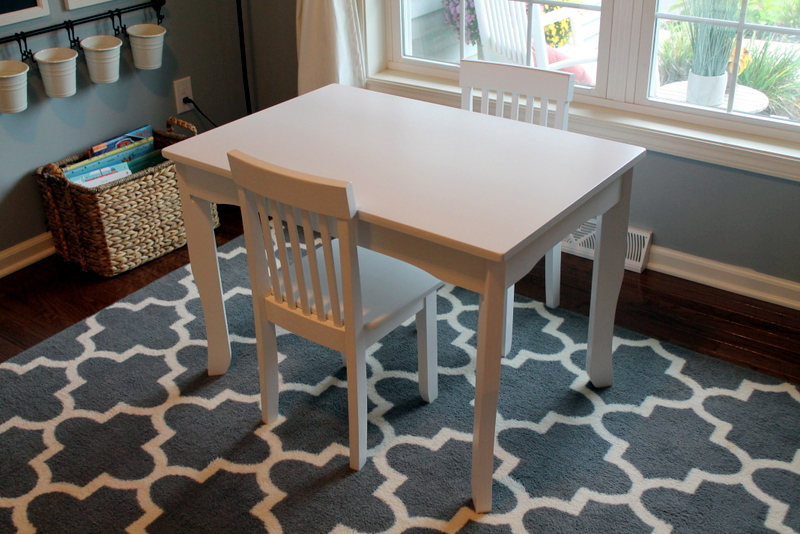 I searched for a LOT of tables and chairs, and it was actually a bit of a challenge to find many that were taller in height (since I want this to be able to suit the boys as the continue to grow, and so many of them are so short!). It came down to the Carolina Small Table & Chairs from Pottery Barn Kids and the Lipper Mystic Table and Chairs set as my final two choices, and since the latter was a good $100+ cheaper, there was really no question. 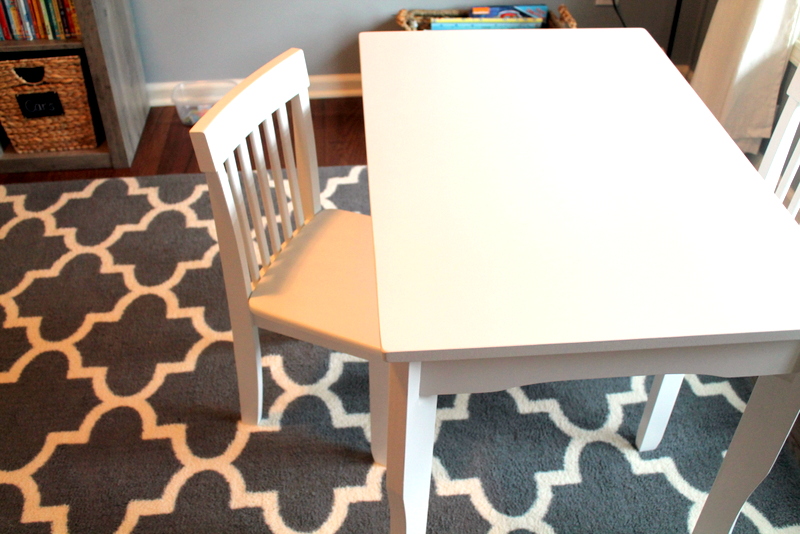 The only thing that I didn’t love was that it was ALL white, so we may wind up spray painting the chairs another color (possibly navy?) at some point, but otherwise, I’ve been SUPER pleased with the purchase. To help protect it, I’m considering purchasing the Small Play Table Mat from Pottery Barn Kids, since the dimensions will fit this table perfectly. But so far, it’s already proven useful for everything from driving cars to playing “restaurant,” so I’m calling it a win.

The second thing I knew we were going to need was some more storage. Since this room is originally designed to be a dining room, there are no closets to be found, and sometimes it’s just nice to have a space to hide things, ya know? So when I happened to come across this Better Homes and Gardens Rustic Farmhouse Storage Bookcase from Walmart, I knew we had to have it. 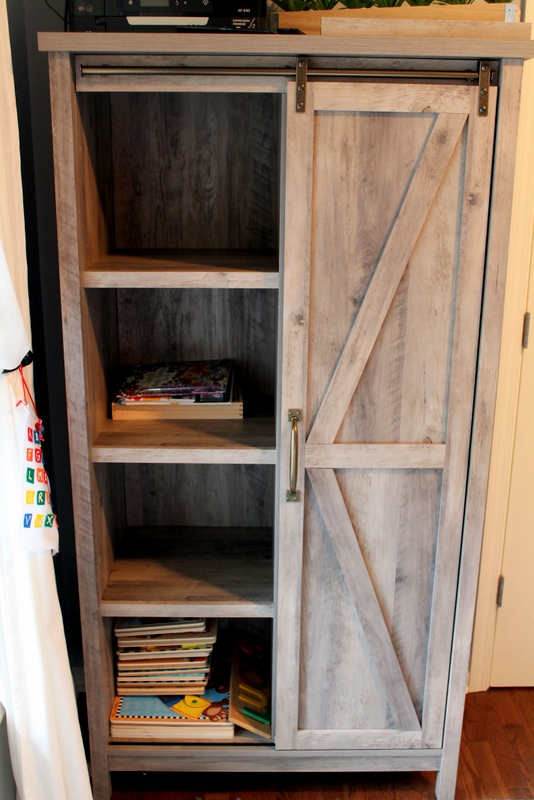 It was a bit of a beast to put together, but between Jay and I, we managed it in about an hour and a half. The gray finish of it actually matches our existing Better Homes and Gardens 6 Cube Storage Organizer which was already in the office, so it was perfect. Meant to be, I tell you! 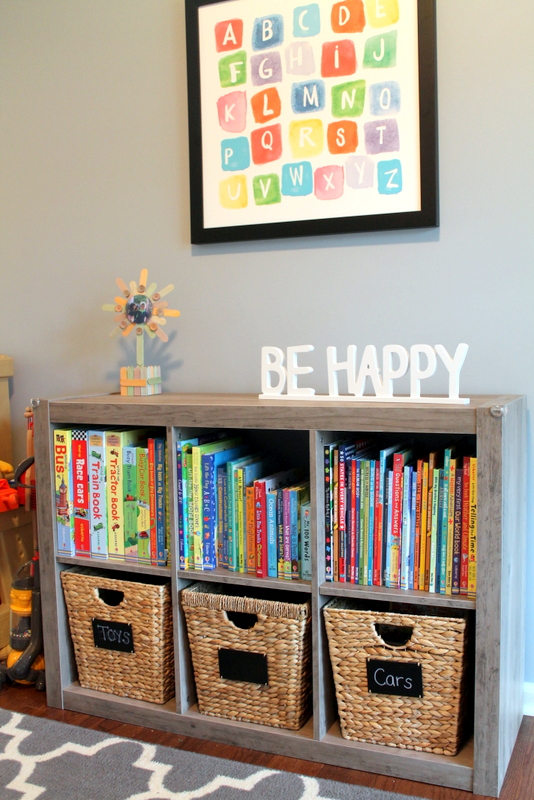 Filled with lots of books, of course. <3 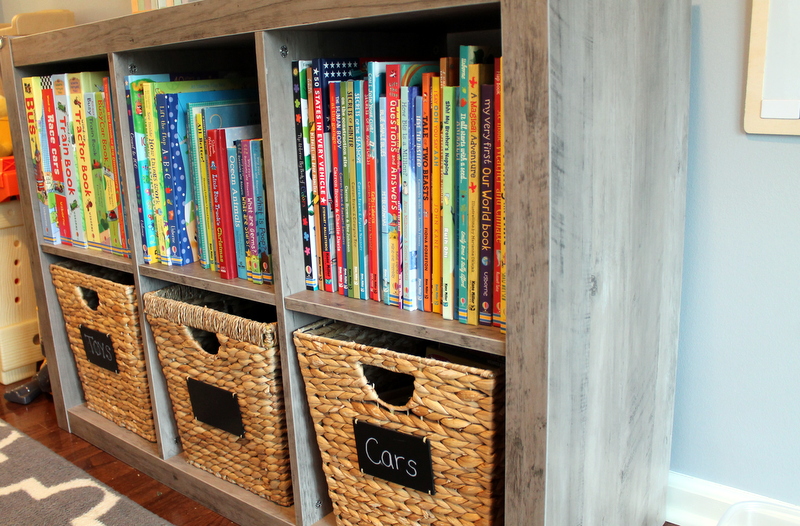 Last, I knew I wanted to have somewhat of a “fun space” on the wall, where I could display some of the boys’ art work and allow them to play. I came across a bunch of different renditions of art displays online and eventually mashed them all together into what I have today…and while I still have some finishing touches left to do, I. Just. Love. It. 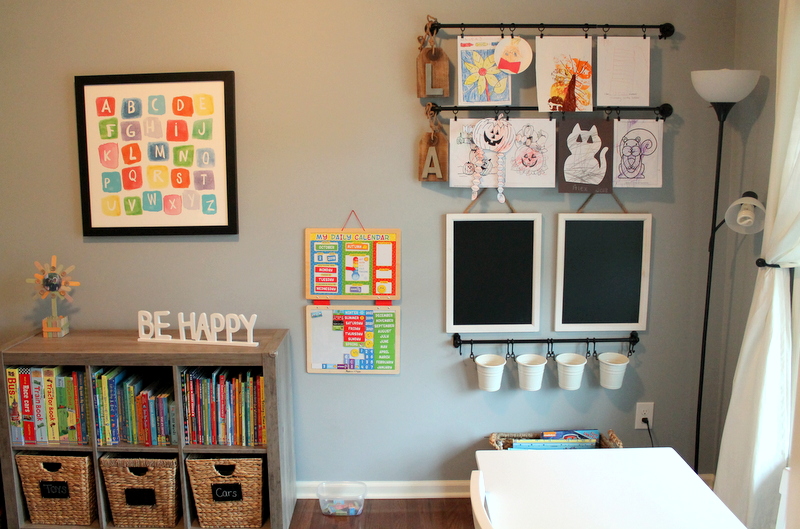 On the top, I layered two of these Adler Curtain Rods, which I loved the look of since they had somewhat “finished” and industrial ends that would be seen. 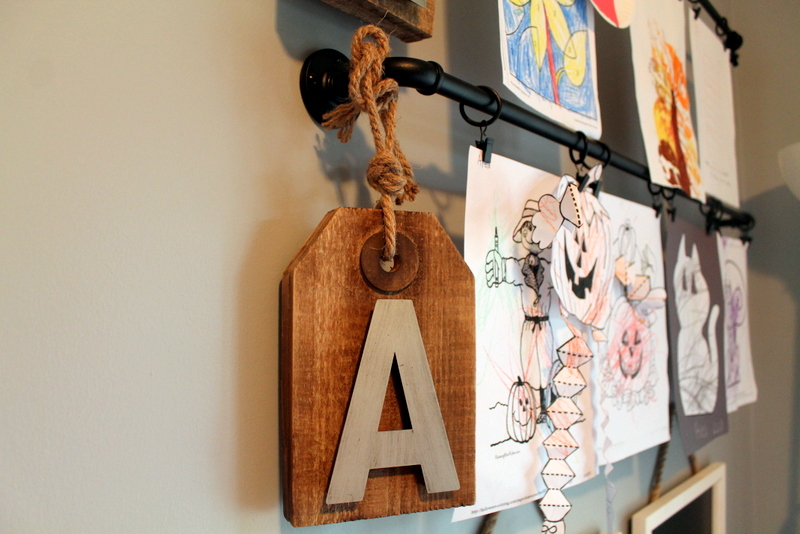 Then to actually display the artwork, I grabbed a pack of these curtain rings with clips to loop onto the rods and they work like a charm. 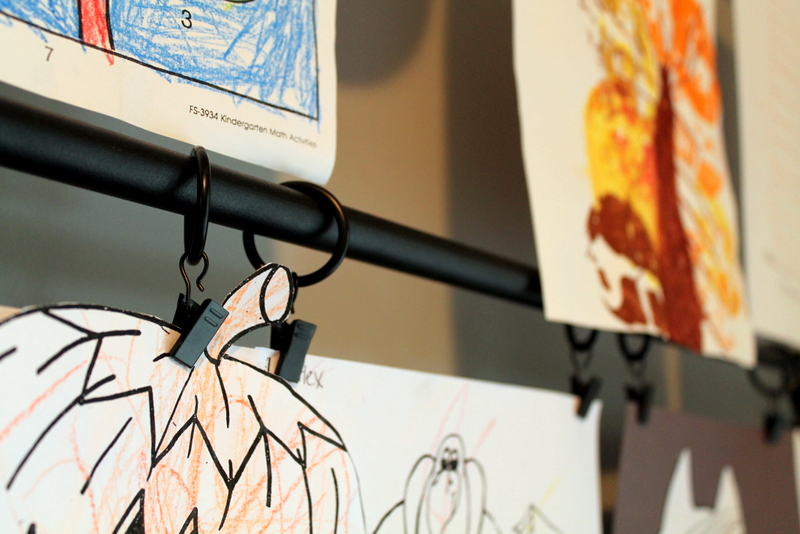 The L and A pendants are actually fun finds I got from the At Home store probably a year or so ago, for about $8. each. I had originally planned on using them in our mudroom, but could never really figure out how to make them work, so they’d just been sitting around ever since. Now, they’re perfect for showing whose artwork is displayed on each row. 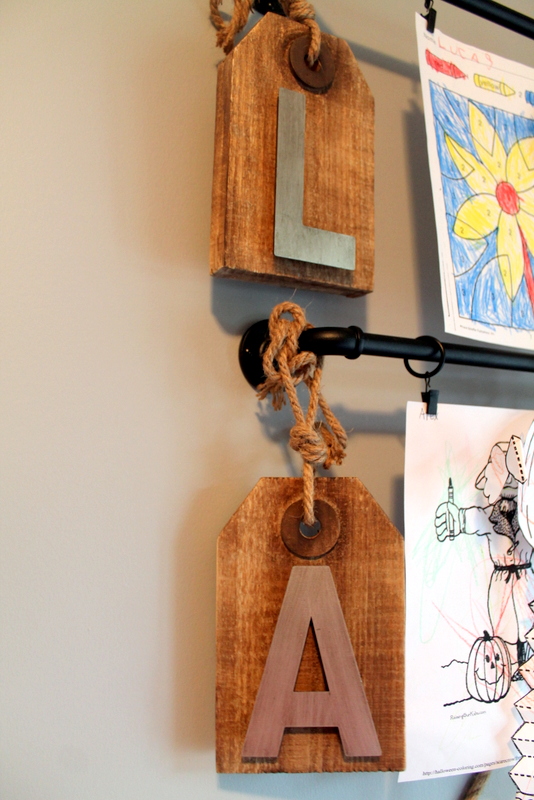 Underneath the art display are two of these chalkboards, which I found at Michael’s. They were something like 60% off the day I went, so I think it only cost me about $14 for both of them. 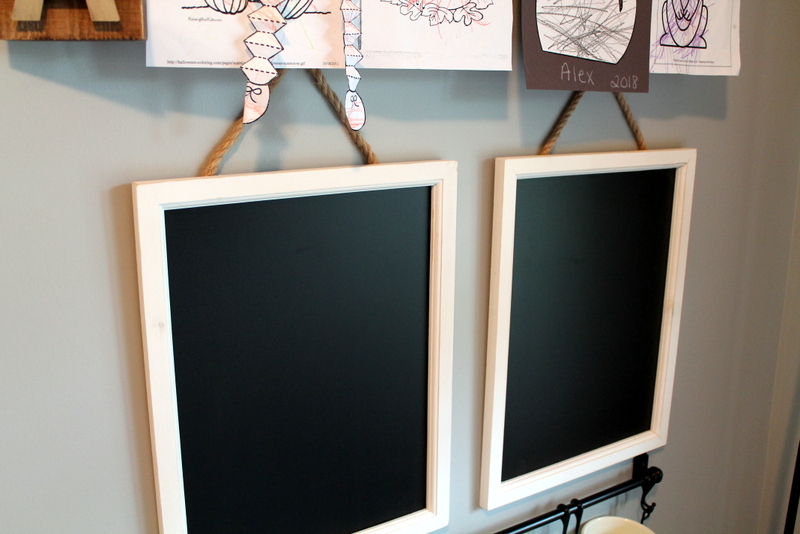 Underneath the chalkboards is this fun little FINTORP system from Ikea, which includes one of their 31″ rails, 4 utensil holders, and 10 hooks, all in black. Obviously. 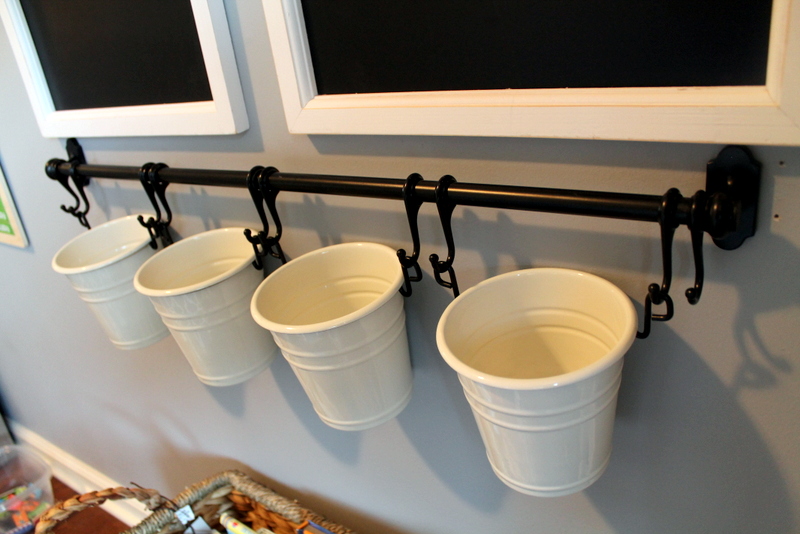 I’m really just so pleased with how this area turned out!

To the left of the art is this Melissa and Doug Magnetic Calendar, which we’ve had for probably 2 years now?? 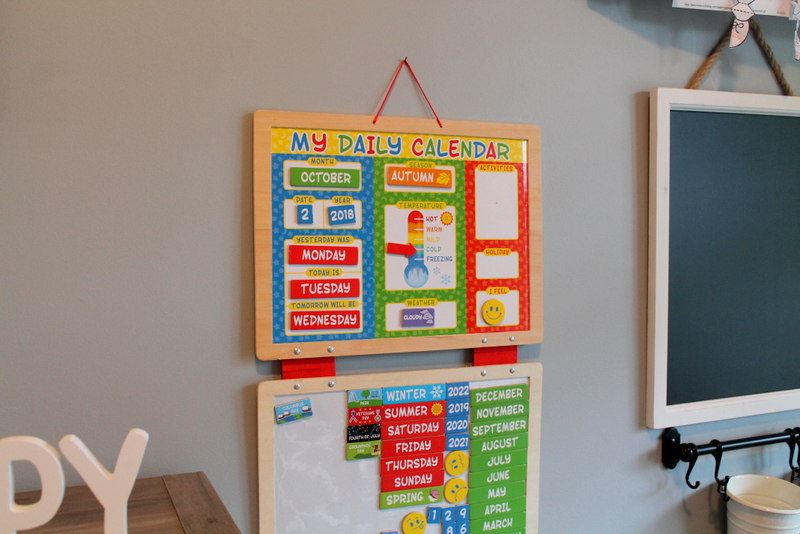 Actually, that’s a lie. This is our second calendar, since the first one wound up victim to one of the boys’ stomach bugs last year…but enough about that.

Lucas LOVES using this calendar, and changes all of the information on it almost daily. Now that it’s hung up, he’s actually taken to playing a bit of a “teacher” role with Alex and it’s just too cute.

We do still have one corner left in the room that has yet to be dealt with, and that is my mini office space… 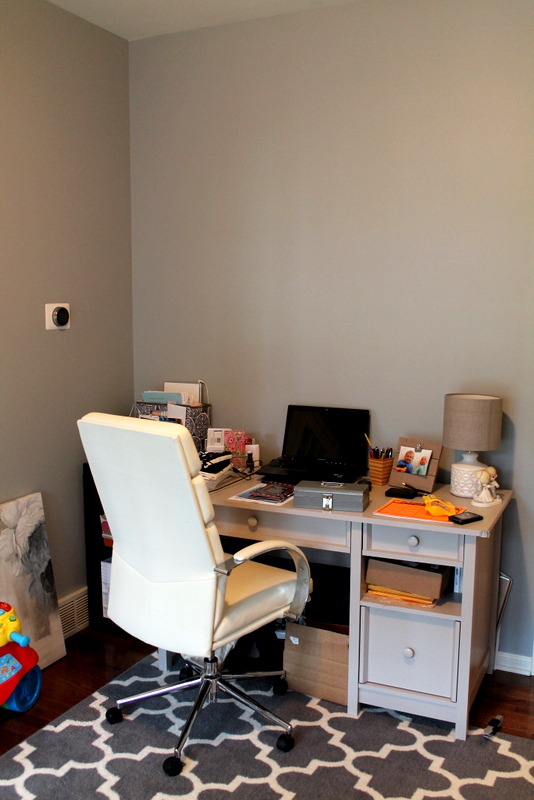 I still have yet to decide if I’ll relocate my desk elsewhere and surrender my “office” to being the boys’ room, but for now, this is my tiny space. ; )

« Another Exciting Change I’ve Made for My Health
Fun on the Farm! »