Well, another fantastic weekend has come and gone! If nothing else, the weather was absolutely gorgeous, so that itself was enough to make for an awesome couple of days home with the family.

Friday night was spent at home (no surprise there) and included not only an amazing home-cooked dinner, but some delicious wine to boot. 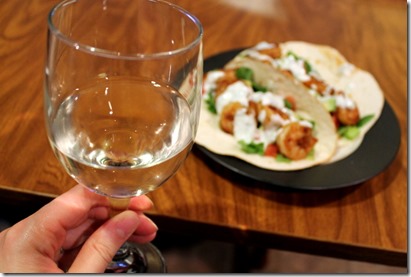 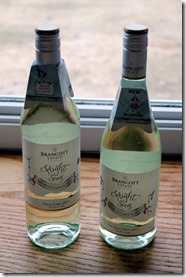 “I participated in an Ambassador Program on behalf of Millennial Central for Brancott Estate Wines. I received product samples to facilitate my review as well as a promotional item to thank me for my participation.”

So Brancott Estate has a new line of wines known as “Flight Song.” The line consists of a Pinot Grigio and a Sauvignon Blanc (both right up my alley), which are naturally 20% lighter in calories. 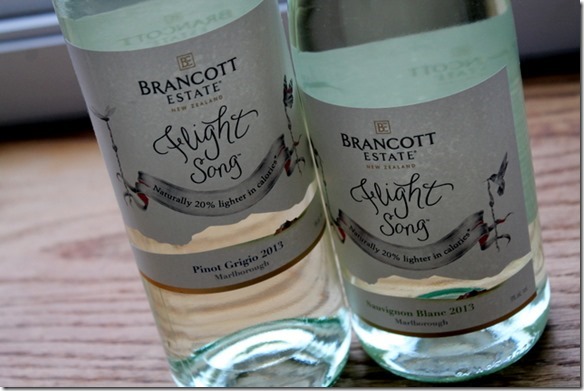 Jay and I were both thoroughly impressed with the full, crisp taste of the wine. Seeing as it’s made lighter in calories, we weren’t really sure what to expect, but I was definitely enough of a fan to go for a second glass. 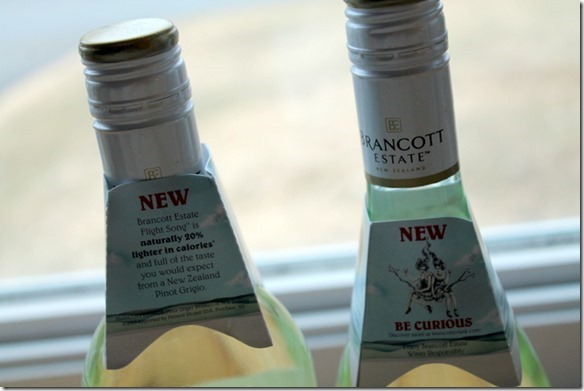 Me + more than one glass of wine on a Friday night is rare, my friends (hello, bedtime), but it was worth it. Mmm mmmm. (You can check out Brancott Estate on both Facebook and Twitter!)

As for dinner? Well for one, I didn’t do anything to make it, since it was was made entirely by the hubs, so that was quite the perk. We had Shrimp Tacos with Cilantro-Lime Sour Cream (we used this recipe) and WOW were they good. 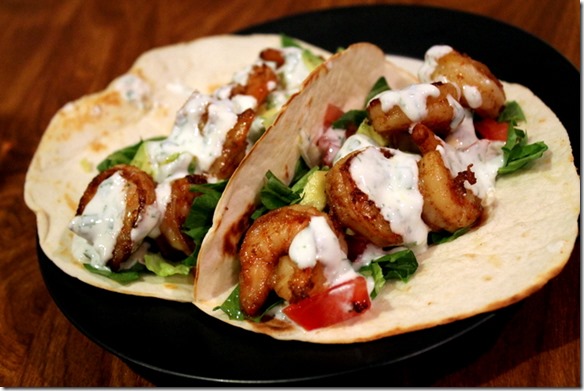 We’ve certainly had our fair share of tilapia tacos, but I was shocked when we realized that this was our first time ever attempting shrimp tacos. Umm, what were we thinking?

After about 3 hours worth of watching episodes from season two of Downton Abbey (so, so, SO obsessed) we finally called Friday a night. We were up fairly early Saturday morning and got a head start on the day. We headed out to run a couple of errands during the afternoon, which also happened to include a pit stop at DD’s for more cookie dough iced coffee. I just. can’t. stop. 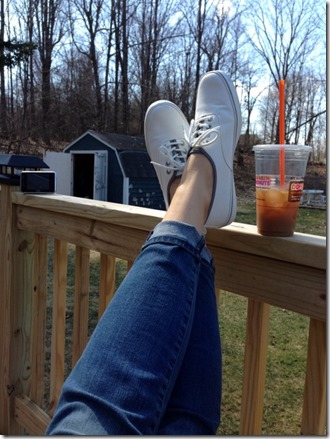 Lucas was ready for his afternoon nap by the time we got home, so once he was down, quiet time in some sunshine was the name of the game. 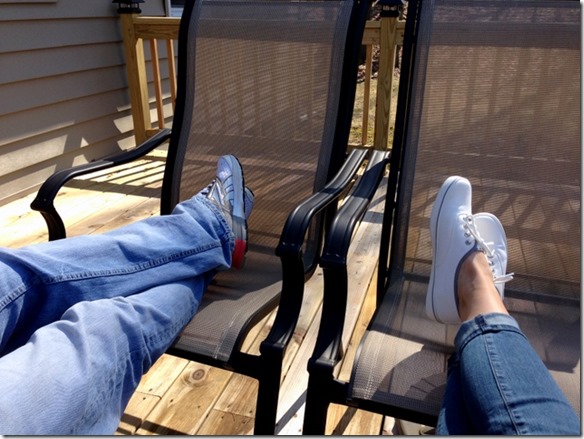 We both sat there saying just how much there was that could have been done, but really, nothing else sounded more appealing at that moment than sitting and…doing nothing.

Once the little man was up from his nap, I was psyched to bring him out for his first-ever swing on the swings! 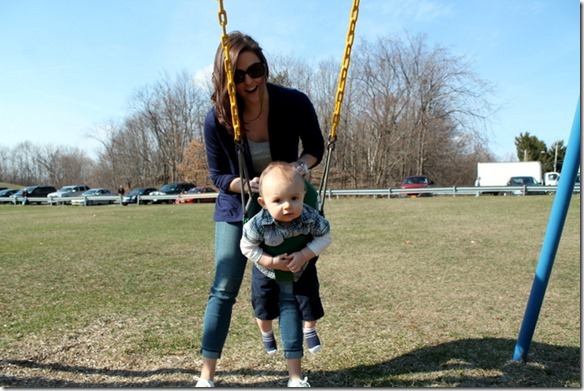 I’ve been waiting for weeks for the weather to finally be nice enough to bring him down to the park to check out the swings. He wasn’t quite sure what to think of it at first but Drools McGee quickly found the fun in it. 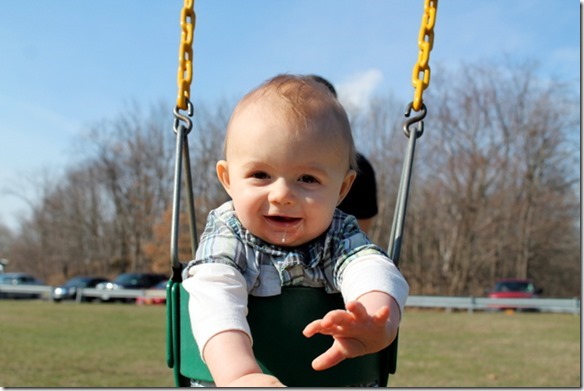 After hanging out at the swings for a little while, we headed back, dropped the little man off with my mother-in-law, and then it was time for date niiiiight.

Our original plan was actually to grab a quick dinner and then try to get some more errands/shopping done for our bathroom remodel (which is moving at a snail’s pace), but that quickly got nixed after we decided to first stop at Brown’s for a cherry raspberry beer out on the patio. 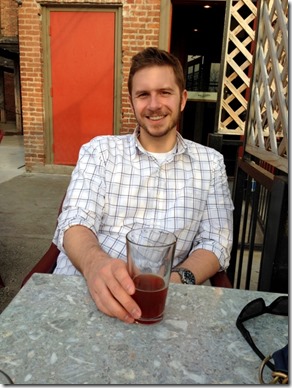 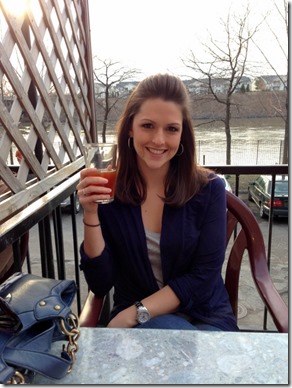 The weather was just too nice to not be outside and, well, the beer just sounded good. In fact, the first beer was so good that we decided to head down the street to another local bar/restaurant, sat at the bar, and got another. 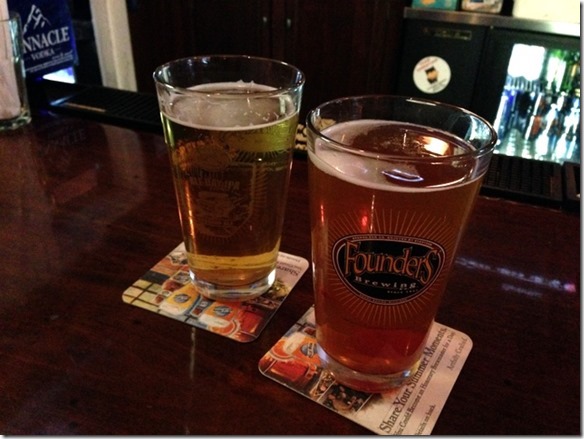 Sam Adams Cherry Wheat for me.

At this point, I was feelin’ pretty good, not to mention staaaarving. I wanted nothing more than a grilled turkey melt with sweet potato fries, so that’s exactly what I got. 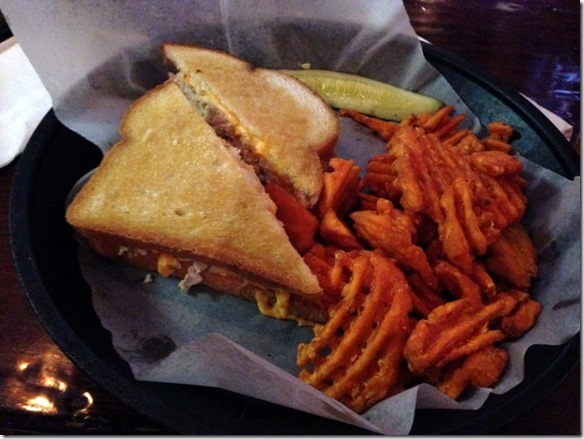 Nothin’ fancy, but man, was it good.

At this point, I was probably more stuffed than I realized, but I think my excitement over dessert outweighed anything my stomach was trying to tell me. My favorite ice cream shop opened for the season a few weeks ago, and I’ve been itching to get there ever since. 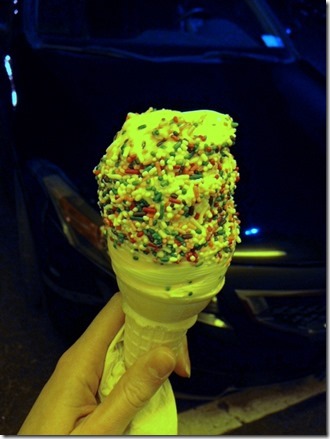 Orange and vanilla soft serve with rainbow sprinkles, for the win.

Sunday was another great day. Beautiful weather, an awesome workout from the NTC app (my first one in a week…finally have my asthma regulated again!) a visit from my parents, lots of time spent with my boys, and baby sunglasses. 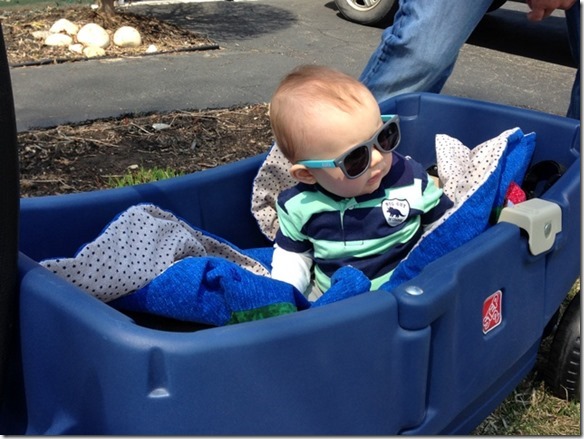 They may only stay on him for about .5 seconds, but I go nuts when he’s actually got them on. Too much cuteness.

Sunday afternoon involved some grocery shopping and, this may be totally random, but have you guys SEEN this stuff? Balsamic mayo?? 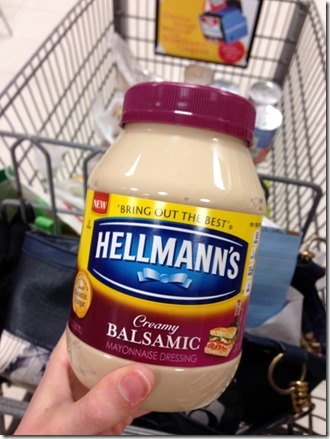 I am obsessed with mayo, and I’m not ashamed to admit it. This stuff was just too intriguing to pass up so it’s now in my possession…I’ll be sure to let you guys know how it is. Promise. 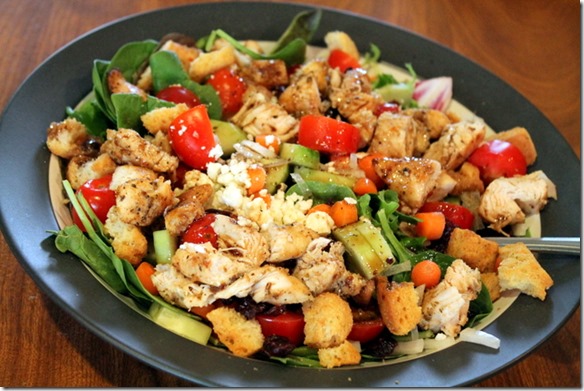 And then there was dessert. Because when said grocery shopping from above happened, I was hungry. And I wound up bringing home this. 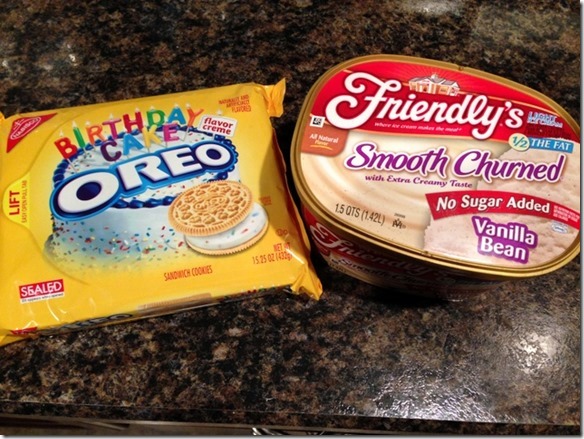 I didn’t realize until I got home that I totally got the wrong ice cream (I don’t typically go for “no sugar added”), but it still tasted so, so good. 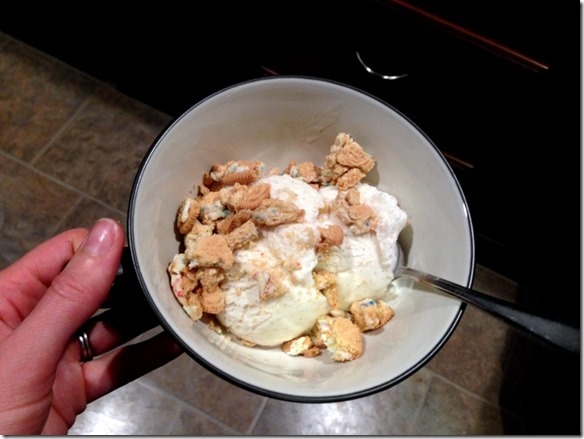 A perfect way to wrap up the weekend, indeed. And now, here we are back to the grind of the work week. I hope everyone has a great week ahead!