Ahhh, well hello friends! I am sitting down in hopes of making it through writing up this whole post without having to go tend to my poor Lucas, who came down earlier today with a pretty nasty stomach something or other. I mean, seriously, I’m just OVER IT. The poor kid has had his fair share this year.

BUT, we were lucky that nothing interfered with our surprise trip out to Great Wolf Lodge late last week! 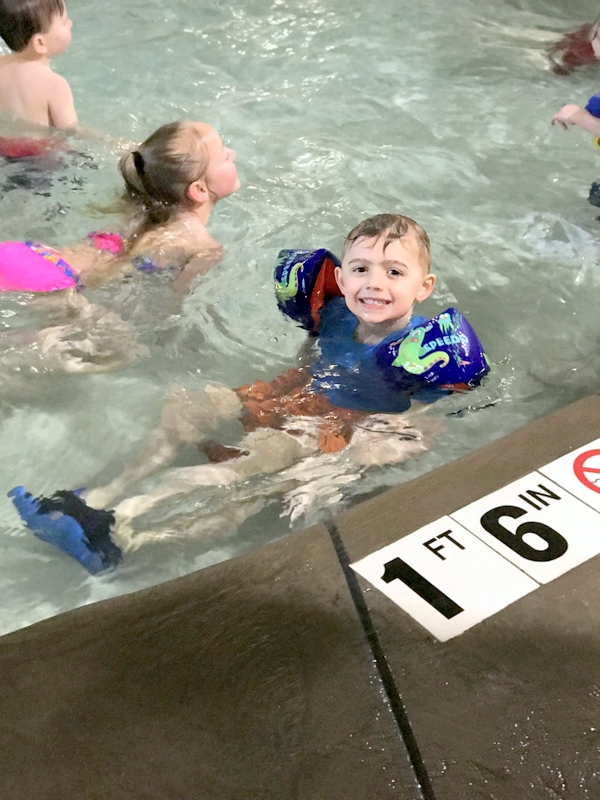 I’m actually assuming that’s likely where he picked up whatever bug this is, but hey, who knows…

So after Lucas’s half day of school on Thursday, we told the boys that we had to get in the car to keep daddy company to go take care of something for work. The ride out is just under 2-1/2 hours, and it was killing me not saying anything until the very end, but with about 10 minutes left in our trip, we gave Lucas a note to read, telling him we were surprising them with a trip to Great Wolf Lodge. It was THE best reaction we could have hoped for, making the secret well worth it <3 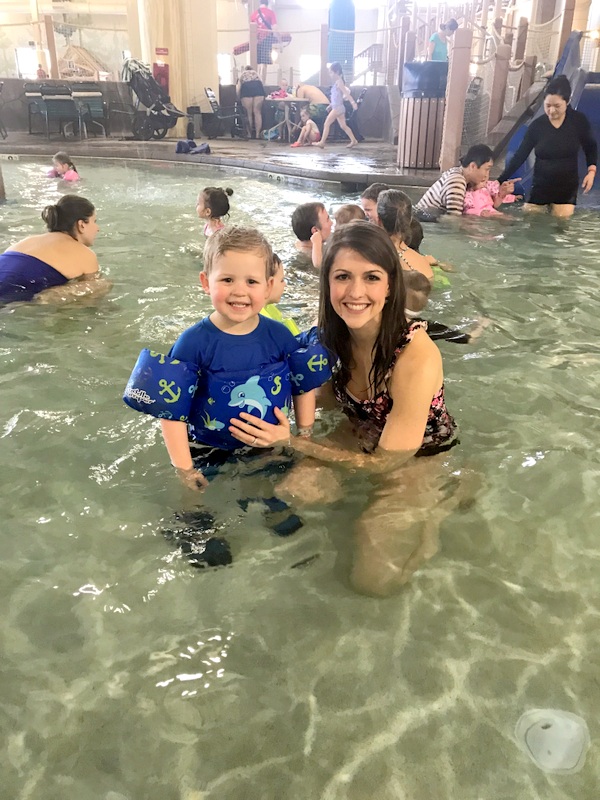 By the time we arrived, our room was already ready, so we quick checked in, dropped our bags, changed into our suits, and headed for the pools! The boys were love-ing-life, although Alex’s boycotted nap made for a bit of a dicey afternoon and evening.

Good thing they have beer on tap right inside the water park! 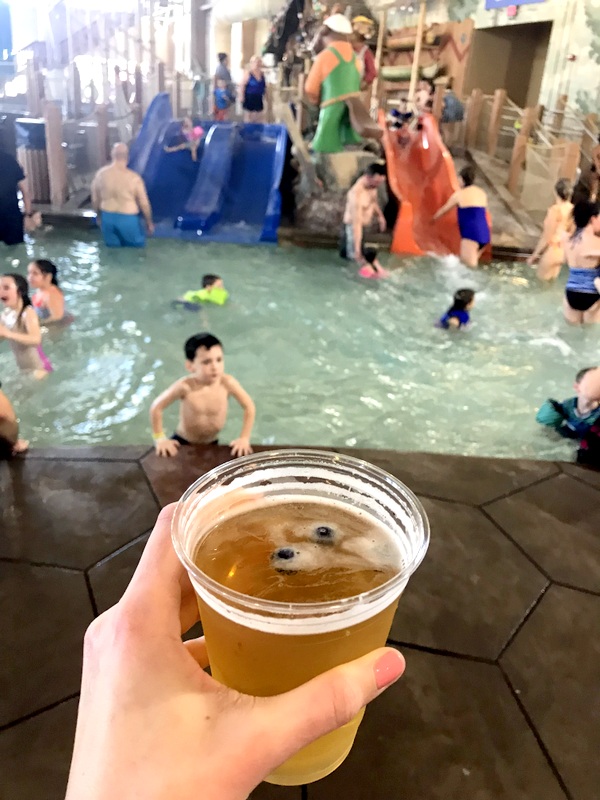 They actually had a really good blueberry beer on tap (yes, those are blueberries floating around in there!) so we enjoyed a couple of those in between playing in the water with the boys.

Around 6ish (I think?) we headed back to the room to get changed and then made our way downstairs for dinner. Oh, did I mentioned Alex was a grump? :- D 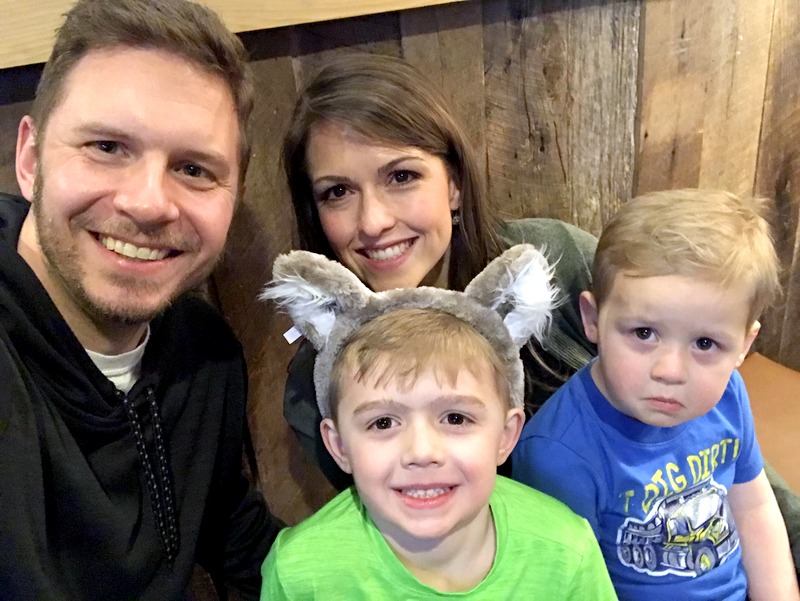 Dinner was great – the boys got the buffet (they were starving and needed something ASAP!) and their burgers were just as good as we’d remembered them from our last trip. 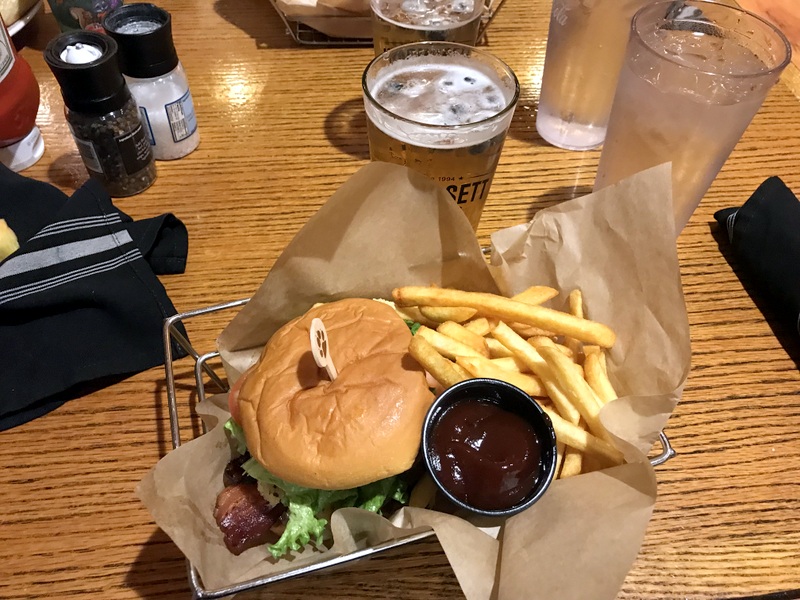 After dinner, we hit up the Howlin’ Timbers Play Park so the boys could do some rides, some mini golf, bowling, and more. 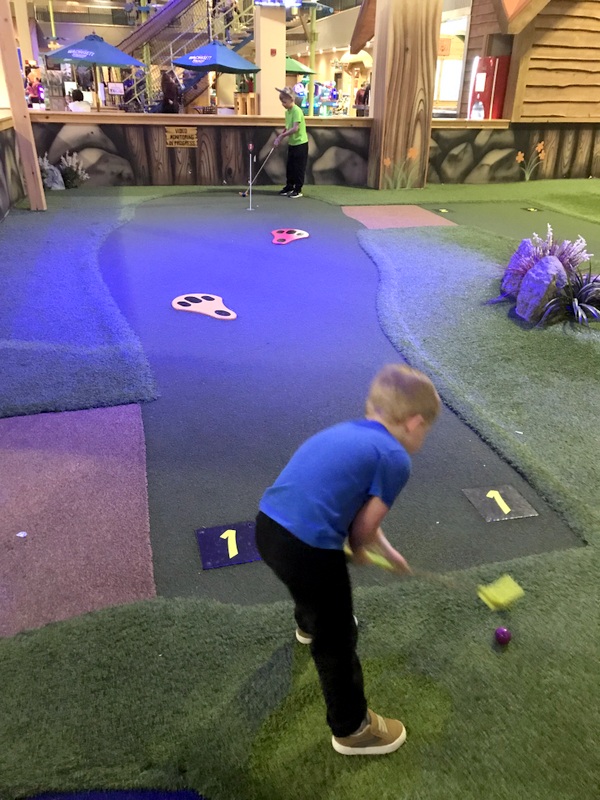 And then we finished up the night with a sweet treat! 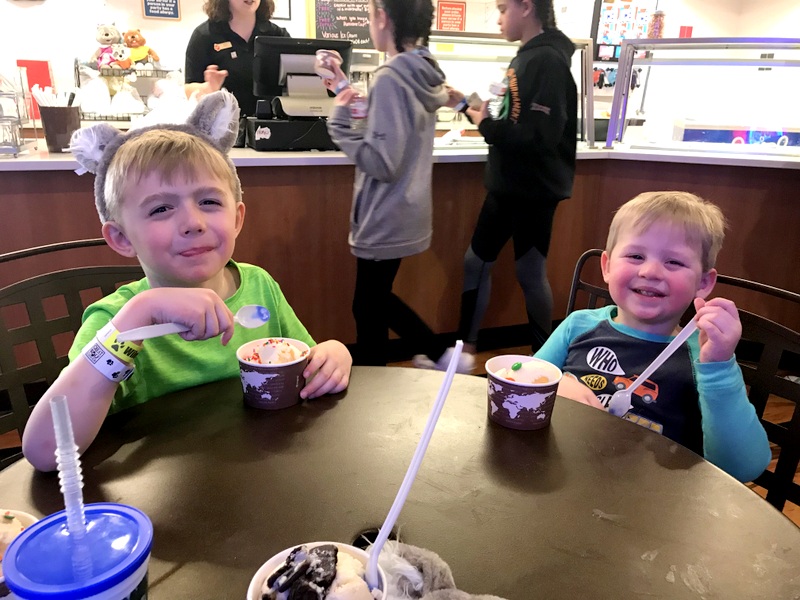 One of the big differences between our first stay and this one was that we opted to save a few bucks this time around and went with a standard hotel room with 2 queen beds (as opposed to the suite that has the wolf pup den with the bunk beds).

Now, I don’t know. But seriously, I have a legit question for any of you out there who have managed to successfully stay in one open hotel room with small children and have them sleep. Because OH MY, was this a bit of a disaster!

Lucas would have been fine, but Alex? Ummm yeahhh, NOT havin’ it. We tried laying down with them by about 9pm…finally around 11pm, as he was climbing all over me in an attempt to get comfortable, I laid him down one last time and rubbed his back until he finally fell asleep.

Then about 15 minutes later, I nearly had a heart attack as I was woken up to the sounds of the fire alarm blasting through our room. The kids continued sleeping through all the noise (?!?) and Jay and I tried figuring out if it was legit or not…but when we looked out and saw everyone leaving their rooms and heading to the exits, we knew we had to move it.

So we picked up the half-conscious kiddos and everyone was escorted to different areas while they waited for the fire department to arrive and investigate. After about 20 minutes (maybe? I was delirious at this point) we heard someone say it was a false alarm and that, apparently, a teenager had pulled the alarm.

Thankfully, the boys got back to sleep fairly easy, and after a bit of a restless night’s sleep for all, we were back up and at ’em again the next morning. We hit the water parks first, followed by some more games. 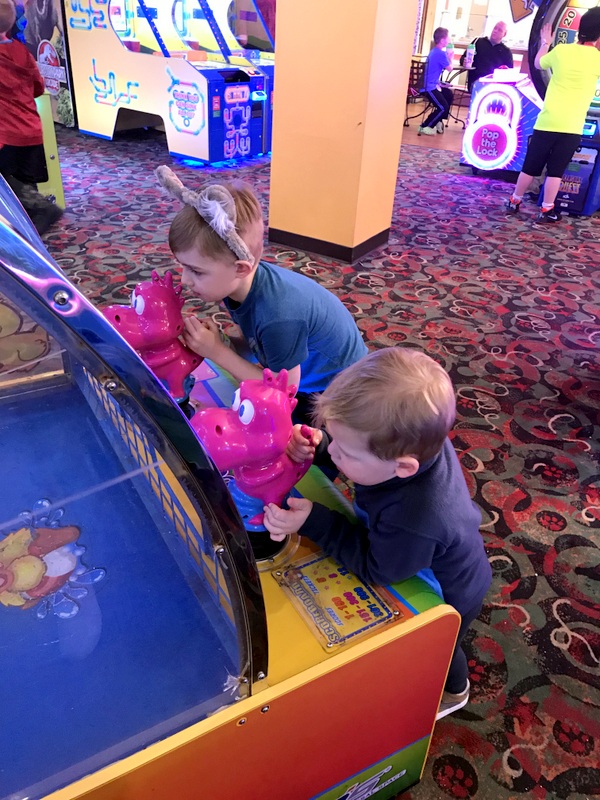 And then one last meal at the restaurant before packing up the car and hitting the road. 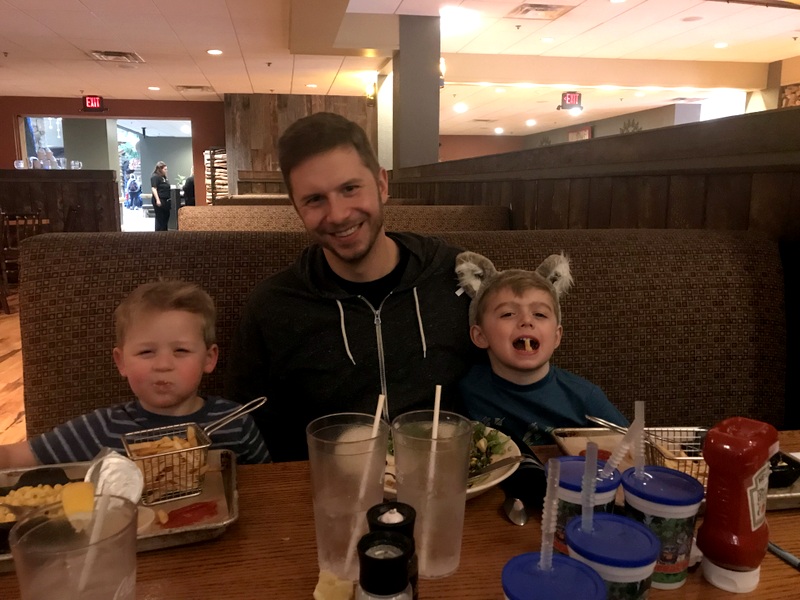 This trip honestly felt a little bit more challenging than our first trip, but overall, it was still a great time and we were so glad to be able to surprise the boys.

And to add to an already great day, we arrived back home to 70+ degree weather on Friday, and my GOODNESS, was it heavenly! We basically dropped our bags and hightailed it outside, staying there and playing with some neighbors before we were clearly pushing it for dinner and bedtime for our very overtired kiddos. 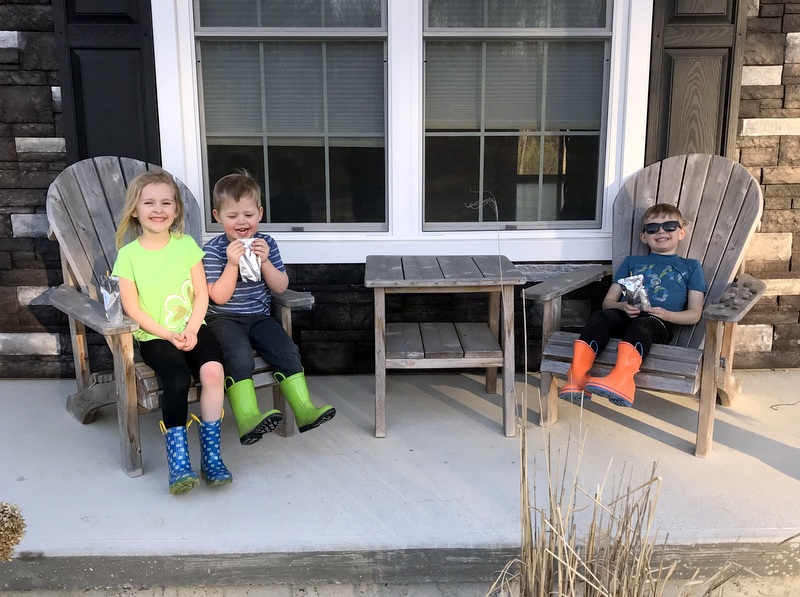 But I mean, when you have a random day like that, you have to take advantage!

On Saturday, we had plans to go out for dinner and drinks with our friends John and Tal, and my MIL came over to watch the boys. Since it was St. Patrick’s Day weekend and I knew everyone would be out in their festive green attire, I had to go with green nails since I really only own like, 2 green shirts and wasn’t really feelin’ either of them. But these worked. 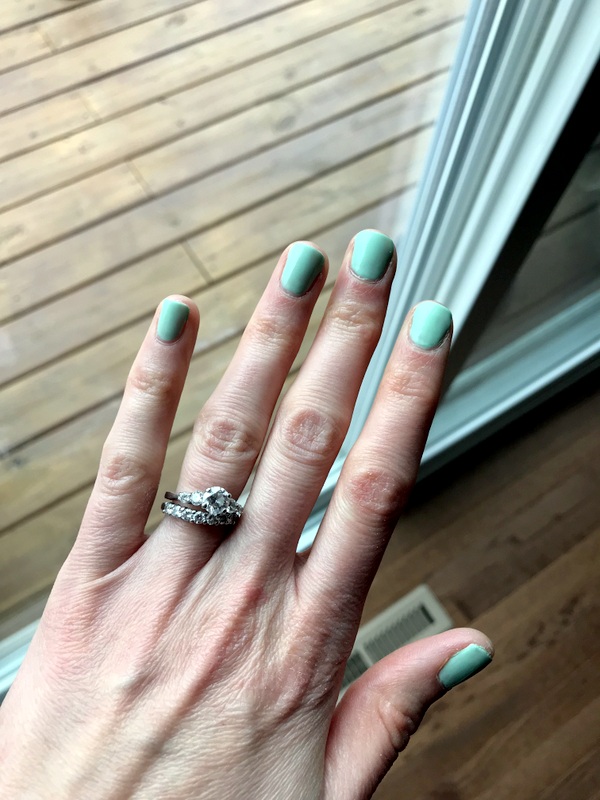 For dinner, we made our way into downtown Troy and hit up Slidin’ Dirty. 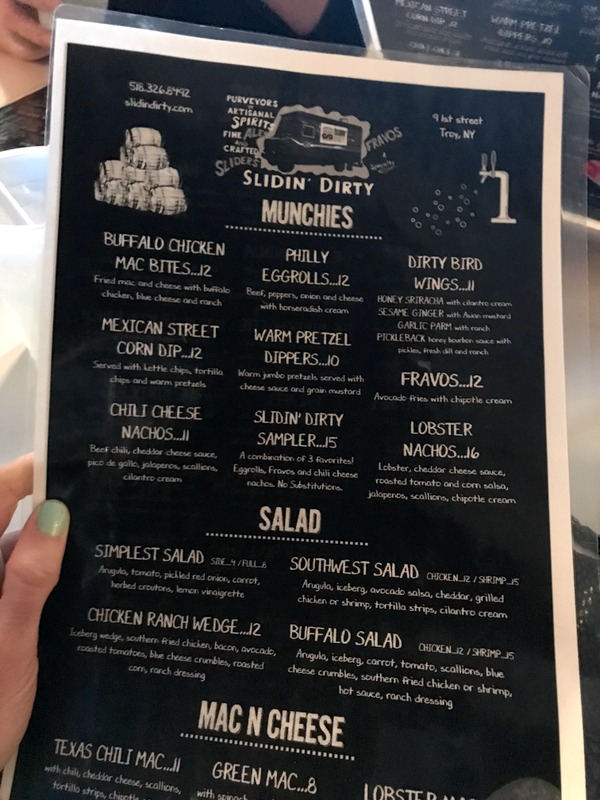 I’d only been there once before, but funny enough, I actually wound up ordering the same two sliders that I did the first time, unbeknownst to me. So if you want to see those, check ’em out here.

Along with delicious sliders were yummy drinks, plenty of laughs, and lots of fun. 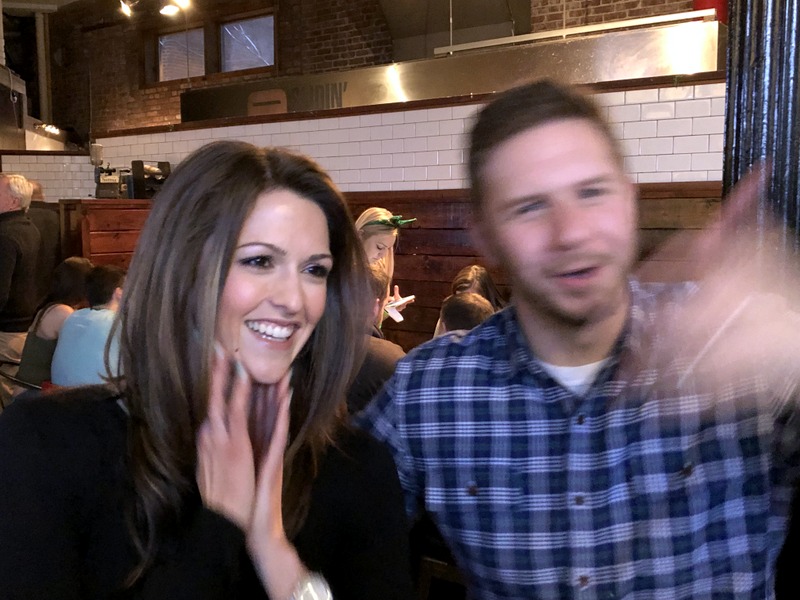 Lucky to have this one by my side <3 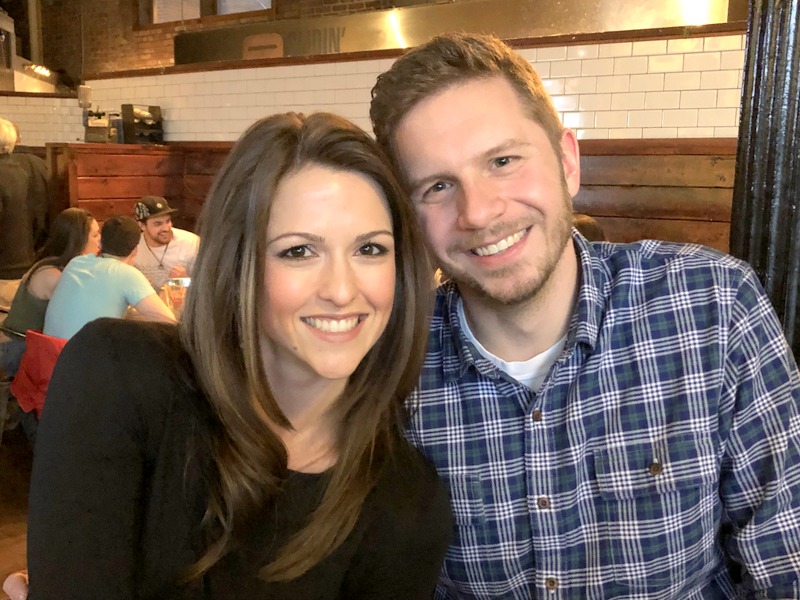 After dinner at Slidin’ Dirty, we stopped by another bar for a drink (Footsy Magoo’s), followed by one last stop at Ryan’s Wake, where we also happened to meet up with a couple more neighbor friends! 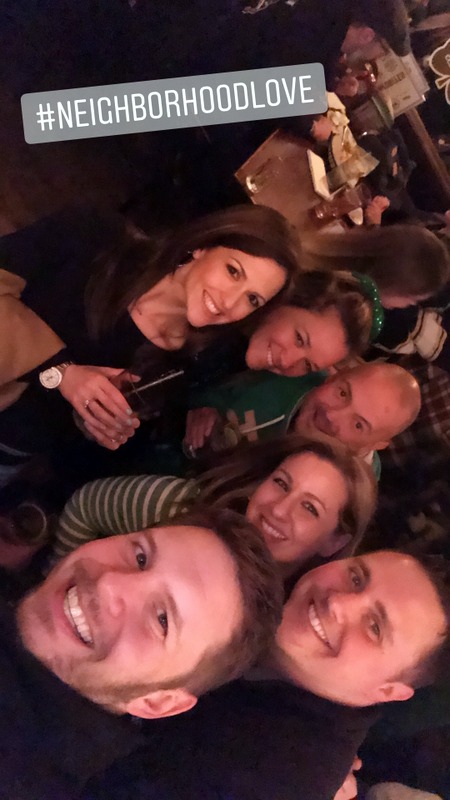 And then, of course, now we’re ending the fun with a sick kiddo, so here’s hoping we can keep it contained to just my one buddy. Fingers crossed!!