I’m finding it incredibly hard to believe that this sweet little cutie-pie is already 4 months old. A third of a YEAR! Wow. 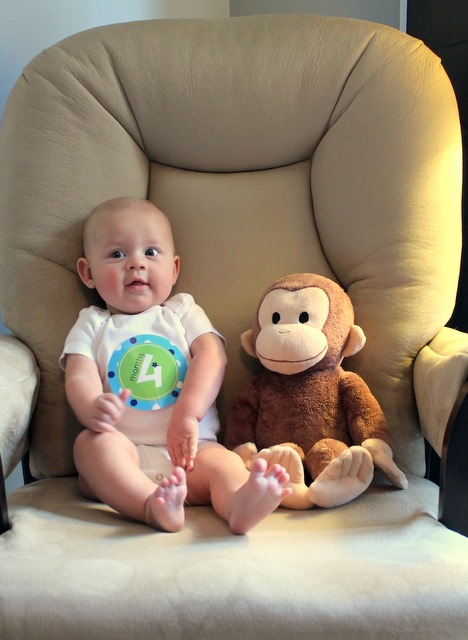 It’s been a fast four months when I look at it as a whole, but we have definitely had some long days. This sweet boy is slowly starting to enjoy life a little more each day (most days) and is becoming a little bit easier to keep happy, which has been wonderful! Here’s a little bit of what four months looks like for Mr. Alex…

Just for Fun: Here’s a look at Lucas at 4 months!

We’ll find out officially at his well check appointment later this week, but according to my home scale calculations, he looks to be weighing in at around 17 pounds. 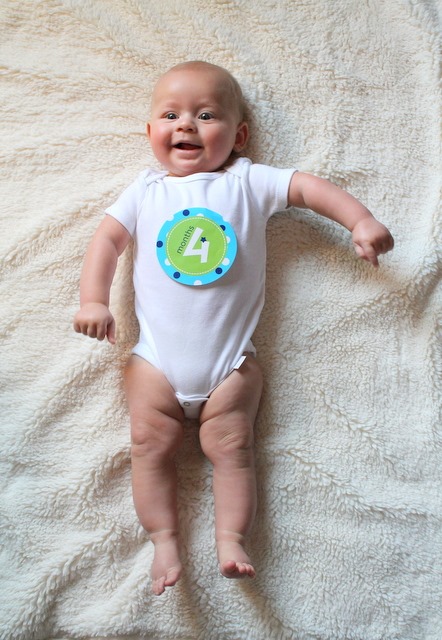 In case you couldn’t already tell by those sweet thighs, Alex loves to eat. On the days that I’m home with him, Alex will typically nurse every 3-4 hours, depending on how long his naps are. When he’s at daycare, he usually winds up having 3 pumped bottles. He still gets one 4-oz formula at bedtime and, depending on when he last nursed, he will sometimes want a little “top off,” so to speak. He’s a great and efficient eater, and it’s definitely one area of our day to day routine that goes smoothly.

Alex is a pretty good napper for me, but no so much for daycare. Our sitter can usually only get him to nap for 30-40 minutes at a time, maybe 2 or 3 times during the day. When he’s home with me, he’ll usually nap take 3 naps, anywhere between 1-3 hours, and an occasional last cat nap depending on where everything falls. As much as I love when he takes a nice, long nap during the day, we’ve been trying to determine whether or not that’s messing with his nighttime sleep. I’ve been trying to do most naps in the crib, but he does still take them occasionally in the Rock ‘n Play. We still swaddle him for naps, too. 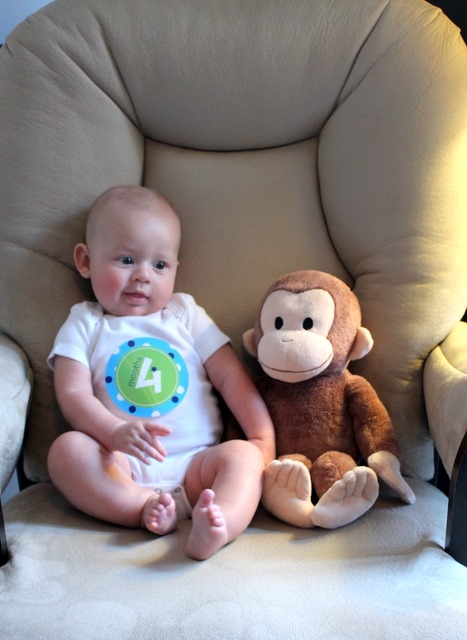 Oh dear. This is an area we’re still struggling with, and usually just when we start to think things are getting a little better, we wind up back in a tough stretch. Alex still has trouble really staying down at bedtime, just like I described in his 3 month update. Some nights he stays asleep, some nights we only need to go in once to rock and settle him again. And other nights (like the night before I wrote up this post) it took from about 7:30pm – 11:30pm. Needless to say, that was a rough night for me.

We try to do bedtime anywhere between 7-7:30pm, depending on where his last nap fell, and on bath nights, we start a little earlier. Our routine is bath, diaper and jammies, bottle, book, bed.

Once he’s finally asleep for the evening, our nights always look different. He’ll usually wake up once, but it could be anywhere between 1-5am. I’ll nurse him and put him back down; some nights he goes back down quickly, and other nights, it takes a bit longer. Those are the nights that I swear I start half dreaming as I’m rocking and walking around his room with him. It’s quite a weird thing when that happens! 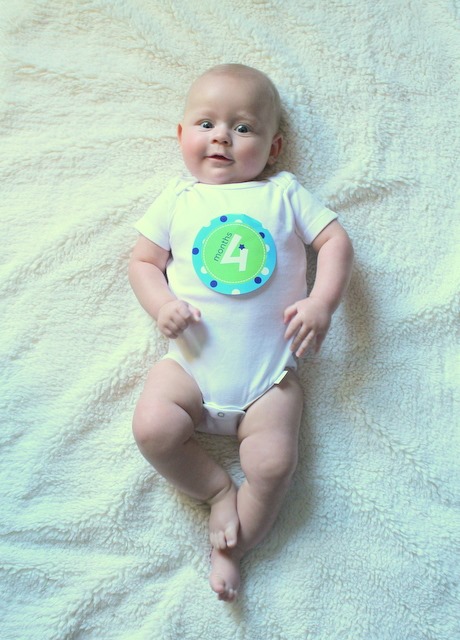 We’re in mostly 6 month clothes at this point, although we do have a few rogue 3-6 month onesies that are still working for us, and still rockin’ size 2 diapers.

Alex has started to be a lot more “chatty” this month, with plenty of coos, gurgles, and giggles. When he’s fed and not tired (and doesn’t have gas…) he is happy as a clam and will give loads and loads of smiles! 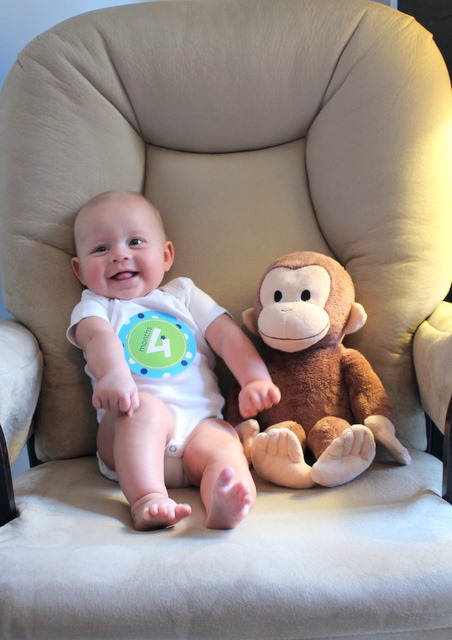 Just like his brother, he’s also proving to have a very strong personality; when he’s happy, he’s the sweetest, most smiley little guy. But when he’s hungry, tired, bored, or whatever else that is making him unhappy…ohhhh, he lets you know it. In a BIG way. This kid can screech and scream with the  best of ’em!

Alex is also incredibly curious and is becoming very interested in his surroundings. He’ll watch any of us leave or enter a room, and can also get rather distracted while he’s nursing.

But out of everyone in the house, I’m pretty sure that he gets most excited and is the most intrigued by his big brother. 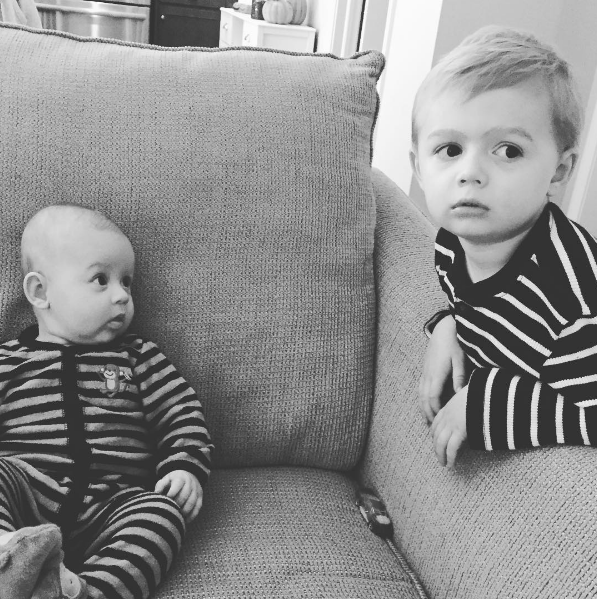 As soon as he hears his voice or sees him, his eyes get huge and he develops a big, gummy grin. It’s the absolute sweetest thing ever!

Alex can now sit up with a little assistance, which is great because it allows him to see the world around him without us having to hold him all of the time (he really loves this seat, which was gifted to us from a friend!) 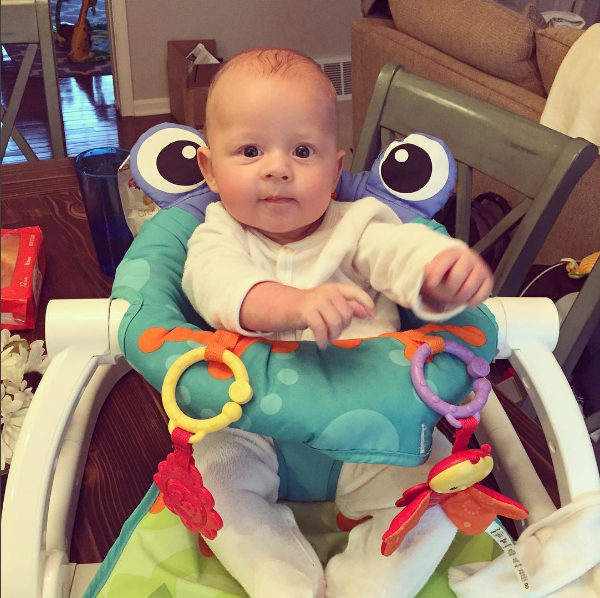 He’s started to intentionally grab for his toys and will often pull them towards his face or mouth. He’s also found his feet recently and loves to grab for them.

He still won’t take to a pacifier, but he’ll often have his thumb/hands/fist in his mouth, so we may wind up having a thumb sucker on our hands…!

His brother, bright lights and colors, mommy’s singing (bless his heart…), Sophie the Giraffe, reading books, the piano mat, being swaddled for bedtime (although I’m not sure how much longer it will last), being tickled under his chin, being held and bounced. 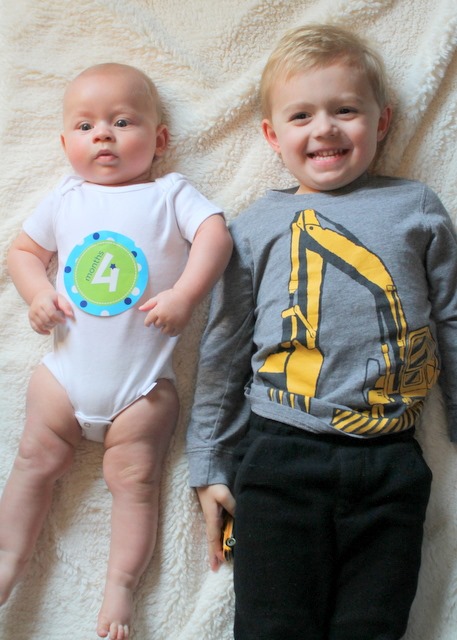 Pacifiers (a blessing and a curse!), being overtired, being out of eyesight from anyone for too long, being in his car seat for too long, staying in the same spot for too long (he likes change and he likes to be on the move!)

I’m likely going to have to put together a full blog post on this area sometime soon, because I could easily let this little section take over the entire post. There has been a lot weighing on my mommy mind lately!

Emotionally? This is a tough season of life. Some days I feel like I’m doing okay. Other days I feel like I’m barely getting anything accomplished or doing anything right. I hit a particularly rough patch on Sunday night and, I swear, Alex must have realized it because the following night, he actually went down for bed with ZERO wake-ups and slept almost 12 hours straight. It was incredible.

Physically? I’m pretty much at my pre-pregnancy weight, but everything is definitely still…different. And who knows whether or not they’ll ever go back to anything other than this, but whatever happens is cool with me. I have too many other things to occupy my time with than worrying about a number on the scale! I’ve also hit the postpartum hair loss stage and have been losing that at a rapid pace (it’s so gross). The same thing happened with Lucas right around the same time so I’m hoping it doesn’t last too long. If anyone has any advice for this one, I’m all ears!

Alex, you are getting more and more fun with each passing day! And no matter how crazy things are going, your little smile has the ability to immediately make everything all better. <3